Denzel Washington is still the only person of color to win the honor -- and that was in 1996. What gives, People? 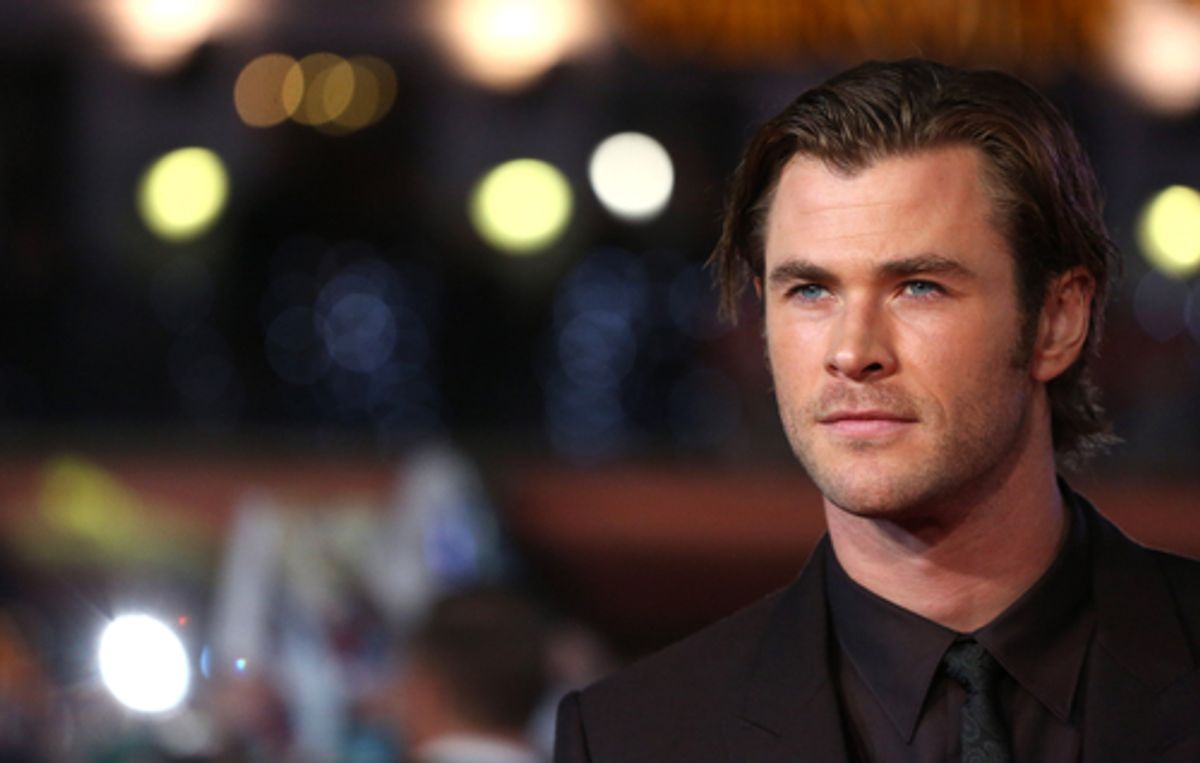 What do Chris Hemsworth, Nick Nolte, and George Clooney have in common? They’re all strapping, successful thespians. They’re all sexy men—even Nolte, back in his Prince of Tides heyday, could pass for something of a looker—so sexy that Peoplemagazine bestowed them with the honor of “Sexiest Man Alive.” But more importantly, they’re all white, just like Ben Affleck, Tom Cruise, Brad Pitt, Ryan Reynolds, Richard Gere, and Johnny Depp, who managed to win twice.

These picks, due to their iconic status as a signifier of cultural norms, take on an outsize importance. They not only say a lot about who we like right now but what we like right now, what we find desirable in a man and what we don’t. Sadly, that often comes down to skin color. Hemsworth, this year’s champ, follows Adam Levine and Channing Tatum, objectively good-looking males who epitomize People magazine’s desire to keep it safe and Caucasian. In the history of the “Sexiest Man Alive,” Denzel Washington is the only black man who has managed to win, and that was all the way back in 1996.

It took People 11 years to crown a person of color, a feat that hasn’t been managed since. This means that in the past 18 years, no black, Asian, or Latino male has ever been more sexy than a white dude—or Sean Connery, who won in 1989, about 20 years after that pick was relevant. As Slate’s Amanda Hess notes, the choice of “Sexiest Man Alive” has “inched closer and closer to a particular hot-guy demographic,” which means that panty-droppers like Usher, Michael B. Jordan, Taye Diggs, Michael Ealy, Gael Garcia Bernal, and Idris Elba have been squeezed out; hell, not even Will Smith has won, and he’s the biggest box-office draw of the past decade.

Of course, People magazine isn’t really picking the objective sexiest man; it’s picking the person your mother is most likely to pine after. How else do you explain Adam Levine, the favorite bad boy of women over 40? According to Hess, here’s the general equation: “The Sexiest Man Alive of this moment is reliably white, straight, mid-30s, handsome to women, relatable to men, ideally suitable for both your grandmother’s coffee table and your niece’s Tumblr, mired in no known scandals, famous enough to have starred in a blockbuster film or high-rated television show in the past year, but desperate enough to agree to subject himself to a revealing shirtless pictorial and embarrassing psycho-sexual interview in People’s pages.”

While this means that the easy money is on Jamie Dornan for next year’s champ, future star of Fifty Shades of Grey and the wet dreams of soccer moms everywhere, People is hardly alone in whitewashing sex appeal. In a recent roundup of the “most attractive nationalities,” a website called World Atlas deemed Sweden (No. 1), the U.K. (No. 4), and Australia (No. 5) to be hotter than Japan (No. 9) and India (No. 10), despite the fact that India is home to Aishwarya Rai, who has more websites devoted to her than anyone else in the world. Brazil and Spain made the list, but no African country managed to be sexy enough to be included.

The biggest issue isn’t that these biases aren’t reflective of real-world attraction; the problem is that they are, speaking to deeply embedded sexual preferences. Sites like OkCupid have given us an important window into these realities. After looking at the numbers on who gets chatted up, OkCupid founder Christian Rudder put it plainly: “All the dating data I’ve seen fits OkCupid’s pattern: black people and Asian men get short shrift.” According to Rudder’s research, nobody had it worse than black women, who got the lowest number of messages of any demographic.

What’s going on here? Rudder explains, “Beauty is a cultural idea as much as a physical one, and the standard is of course set by the dominant culture. I believe that’s what you see in the data here.” However, Rudder looks at these problems fatalistically, telling U.K.’s The Independent that racist OkCupid users don’t really have a choice. “An individual can’t really control who turns them on—and almost everyone has a ‘type,’ one way or another,” Rudder argues. “However, I do think the trend—that fact that race is a sexual factor for so many individuals, and in such a consistent way—raises deeper questions.”

In an essay called “The Gandhi School of Hookups,” writer Jamie Woo argues that these preferences are a choice, one to accept the status quo of racism in society and in ourselves:

You can’t shift desire. This is an argument I hear repeatedly, as if it were a fundamental truth. Maybe it is like our eye colour or the size of our ears: our desires develop until they don’t. It’s such a comfortable idea, romantic even, this commitment to what stirs us within and then to plant it into the ground like a flag. ‘If I could want someone of a certain race, I would!’ exclaim some, like modern day misunderstood Frankenstein’s monsters, helpless in their creation. There’s something seductive about assuming it to be out of one’s hands.

Like People magazine, the dating world tends to favor white men, who are preferred by every single demographic of eligible women, and here we have two options: We can 1) accept these habits with a begrudging complacency, as Rudder does or 2) we can work on trying to change them, as Woo suggests. This sounds like a gargantuan task, but it starts simply with interrogating our own attractions. How often do we talk to partners of a different race online? When was the last time we went out with someone of a different skin color than our own? Because according Rudder’s data, it’s not often enough.

While the real work starts at the personal level, People magazine can play an important role in guiding what our culture thinks is sexy. For a generation of young black women, seeing Lupita N’yongo embody the beauty of dark skin on the cover of Voguereminds them that they exist. In an interview with People, N’yongo explained that from an early age, she grew up thinking her skin color was “unacceptable.” N’yongo said, “Until I saw people who looked like me, doing the things I wanted to, I wasn't so sure it was a possibility. Seeing Whoopi Goldberg and Oprah inThe Color Purple, it dawned on me: 'Oh—I could be an actress!’ We plant the seed of possibility.”

Just as women like N’yongo act as possibility models for young women everywhere, People has the opportunity to do the same simply by breaking out of the box that it has built for itself. Peoplemight be catering to the whims of older white women, but they won’t be the only ones who look up and see Chris Hemsworth, yet another white guy, on the cover. People’s choices matter to anyone who wants to feel sexy—or feel that their beauty is recognized. Idris Elba and Taye Diggs already are some of the sexiest men alive. It’s just time to finally recognize it.