Over the years, Colbert has gifted loyal viewers with a series of hilarious callbacks and repeating characters 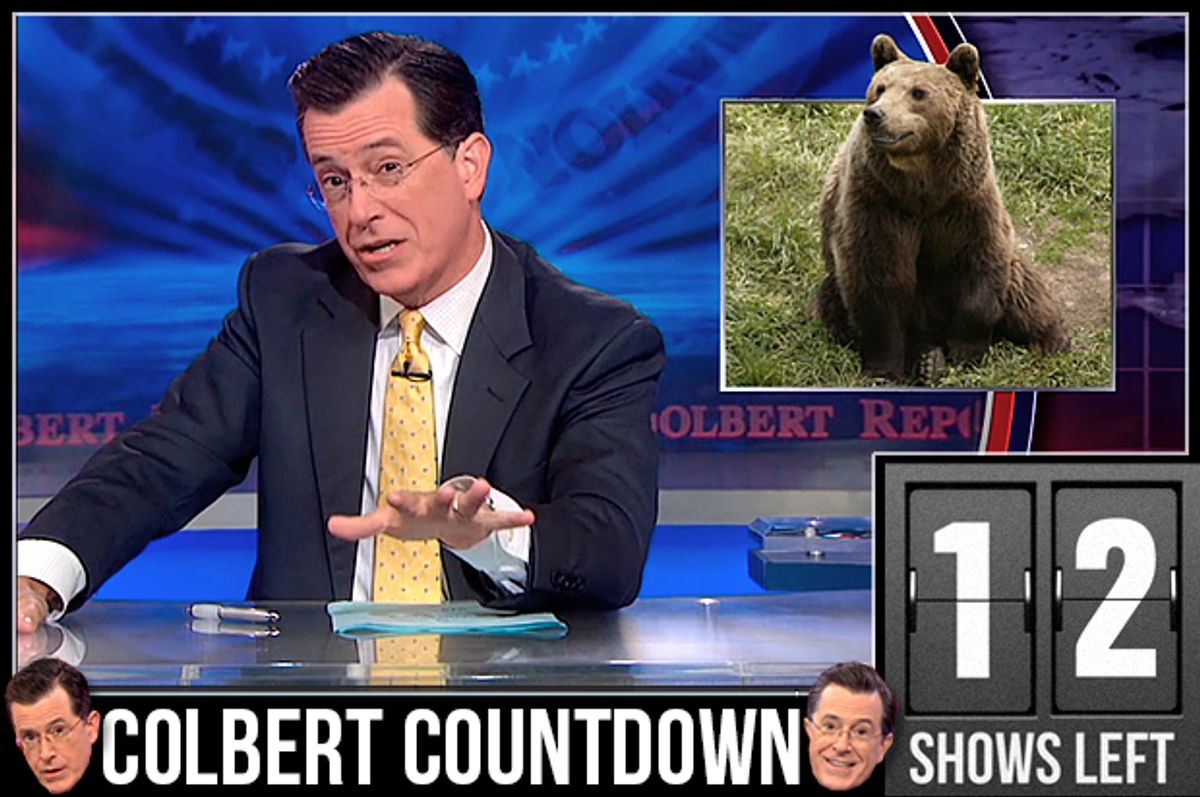 On Dec. 18 the world will lay "The Colbert Report" to rest, and with it, a number of beloved recurring segments, from show mainstays like "Better Know a District" to rare gems like "Monkey on the Lam." Let us reflect:

While his pal Jon Stewart may have a contentious relationship with the host of "The O'Reilly Factor,” Colbert has nothing but love and adulation for “Papa Bear” — "my mentor, my north star, the emergency contact on my Soulcycle membership.”

Stephen's love of "Lord of the Rings"

Arguably this is not so much a recurring joke on the "Report" as it is a recurring joke in Stephen’s life (Peter Jackson called Colbert the biggest Tolkien geek he'd ever met, and Stephen even had a cameo in "The Hobbit"). Here he is schooling James Franco on Middle-earth knowledge:

One of Colbert's most long-running segments and an undisputed "Report" classic, "Better Know a District" has spawned a number of venerable spinoffs of its own, from "Better Know a Protectorate" to "Better Know a Kissinger."

"Monkey on the Lam"

Monkeys don’t go on the lam that often, but when they do, Colbert is on the case with his recurring “Monkey on the Lam” feature. We have more than once considered breaking into labs and zoos and freeing monkeys from their cages just so we can see more of this intro graphic.

Would there even be a "Colbert Report" if it weren’t for the financial backing of the Prescott Group, America’s friendly neighborhood transnational conglomerate? Doubtful. We are also grateful to Prescott Pharmaceuticals for its continued sponsorship of another valuable recurring segment, Cheating Death With Dr. Stephen T. Colbert, D.F.A., and for its invention of essential remedies like Vaxadrin, Vaxadrone and Vaxadrone for baboons, Vaxa-Smacks, Vaxa-Dream, Vaxachub and Vaxamaxx.

Everybody knows that there’s a War on Christmas happening in the United States. Thankfully we have Colbert to bravely defend our eggnog and jingles with his recurring War on Christmas counterattack segment, the Blitzkrieg on Grinchitude.

For Jews, the beginning of the month of Tishrei kicks off the 10 days of repentance between Rosh Hashanah and Yom Kippur. It also marks the annual return of Colbert’s Atone Phone. Over the years, a number of high-profile repenters such as Ira Glass, Jeff Tweedy and Jon Stewart have dialed in to 1-888-OOPS-JEW (not to be confused with 1-888-MOPS-KEY) to confess their sins.

Colbert has tackled many foes over the course of his nine years at the "Report": President Obama, the War on Christmas, Jimmy Fallon. But as every Colbert fan knows, the No. 1 threat to America is, and will always be, bears. Because bears are godless killing machines. (Note: Just because Stephen and bears have buried the hatchet does not mean that we should. Stay vigilant, America).