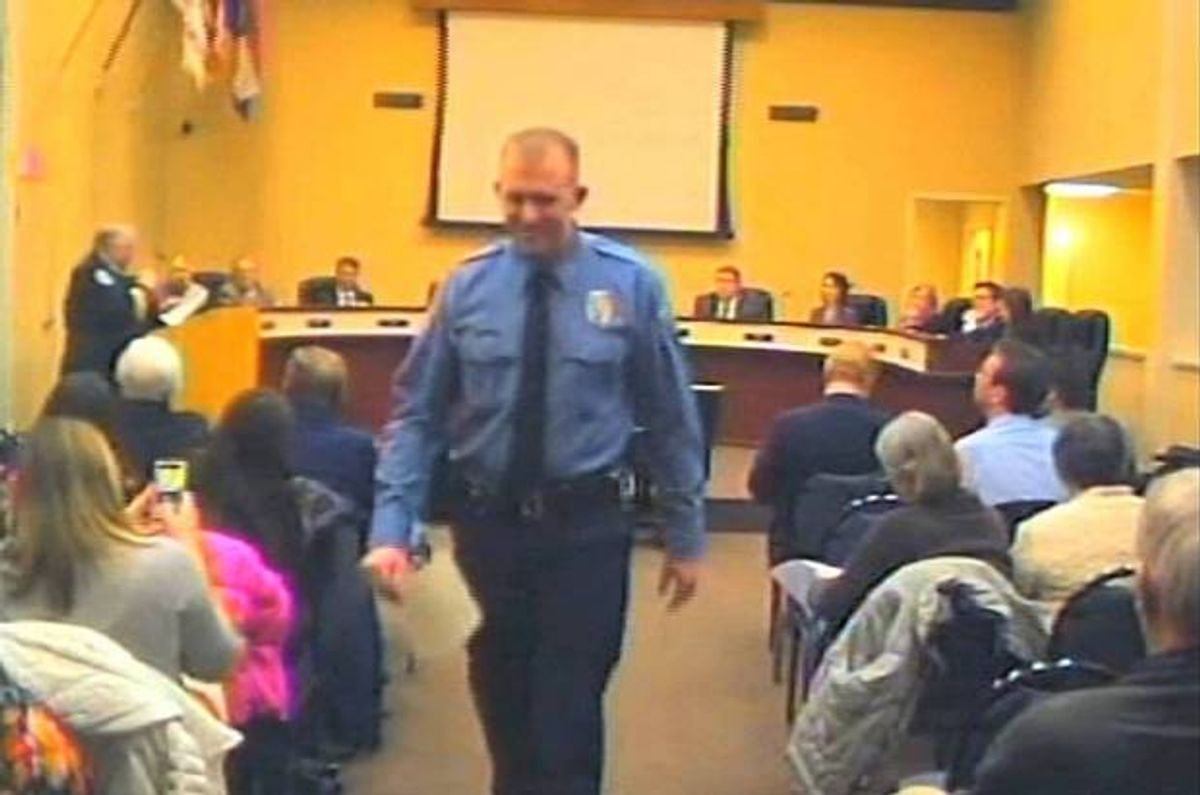 A grand jury of nine whites and three blacks had been meeting weekly since Aug. 20 to consider evidence.

At least nine votes would have been required to indict Wilson.

The Justice Department is conducting an investigation into possible civil rights violations that could result in federal charges.

Initial reports surrounding the shooting conflict, regarding whether or not Brown and his friend, Dorian Johnson were threatening Wilson. Several witnesses reported seeing Wilson pull over the two men on Canfield Drive, at which point he grabbed Brown and started threatening him. Brown and Johnson reportedly ran away, at which point Wilson unholstered his gun and fired at least six shots at Brown, who had his hands up in surrender, killing him. Police officials and one of Wilson's family friends say that Brown was threatening Wilson, and Wilson shot at Brown in self-defense.

Ferguson, Mo. has been host to a steady stream of protests since Brown's death, and the case has been a catalyst for a reinvigorated discussion surrounding police-civilian relations, in particular minority civilians, as well as the excessive militarization of the police. In the weeks following the shooting, hundreds of mostly peaceful protesters flooded the streets of the St. Louis suburb, chanting, "Black lives matter," and "Hands up, don't shoot." They were met with a police force in riot gear, shooting rubber bullets and tear gas at demonstrators, armed with military-grade tanks.

The excessive response from the local police prompted a civil rights probe from the Department of Justice, under the leadership of then Attorney General Eric Holder, for a history of racial bias. Also accused of potential bias was St. Louis County Prosecuting Attorney Robert McCulloch, the man responsible for presenting the case against Wilson. Not only does McCulloch have deep ties to the local police department, he also has a history of siding with law enforcement in similar cases. A petition to appoint a special prosecutor for the case organized by Mo. State Senator Jamilah Nasheed collected over 116,000 signatures.

Authorities have been preparing to crackdown on unrest in the aftermath of the grand jury's decision: businesses have been boarded up, schools closed and barricades erected. The Federal Bureau of Investigations recently circulated an intelligence bulletin warning that the grand jury's announcement "will likely" lead to violence from extremist protesters. Missouri Gov. Jay Nixon also declared a state of emergency in the St. Louis suburb in preparation for a massive demonstration in response to the jury's decision.

Indeed, groups of protesters have been organizing tirelessly since August-- stocking up on items that will be needed for a conflict with police (maps, jail support phone numbers and medical supplies), designating safe spaces as well as "hot spots" likely to be host to more intense protests. The organizers have also written 19 Proposed Rules of Engagement, outlining guidelines for a nonviolent encounter with the police.

In an interview last week with the New York Times, Michael T. McPhearson, co-chairman of the Don't Shoot Coalition, outlined goals of his movement: "It must be changing how police and citizens relate to one another. We're calling for police accountability, police transparency, changing how the police do their work."