"Wilson's career has been stolen from him": Today's most horrifying Fox news sound bites

Since the Ferguson verdict was announced, Fox News has predictably been a carnival of terrible opinions 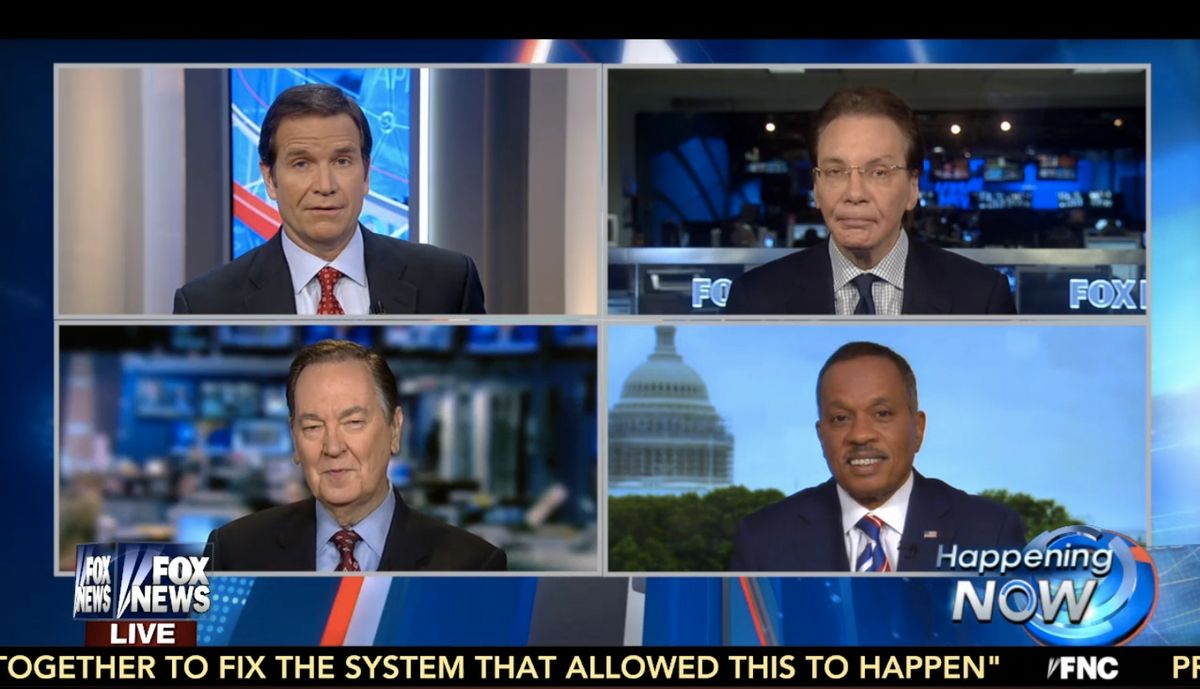 Since the Ferguson verdict was announced last night, Fox News has been a carnival of talking heads spewing commentary that veers between depressing and infuriating and exhausting. None of it was surprising, but that didn't make it any less awful to watch. So here's a selection of sound bites from this morning's Ferguson coverage.

“Well, I think it was very predictable, Bill, because even the limited amount that we knew we could actually paint a fairly good picture that Michael Brown was the suspect from the very beginning to the very end. He precipitated every action that was used against him, he precipitated every contact with officer Wilson."

“[Wilson's] career has been stolen from him because somebody targeted him, not the reverse.”

“The thing that people are missing here is that you have entire parts of a community that is supporting Michael Brown, absent of the fact that Michael Brown committed not only a robbery but attacked a uniformed officer on duty and tried to kill him. That for some reason escaped everybody."

"It was no longer, and frankly for a lot of them, never had been about Michael Brown but the people who had been stirred up by Al Sharpton and Jesse Jackson and others who simply are there for the, as you call it, they advertise themselves, but it's a bait and switch on the black community to think they in any way represent the best interests of solutions."

"We seem to have given away our voice and our actions to these purported race grievance industry leaders like Al Sharpton and Jackson and the social engineering constructs being ginned up by Eric Holder and others. Those don’t solve the problems."

"That's the irony here, is some people seem to think that a terrible crime was visited upon Michael Brown and they respond to it with terrible crimes."

Jon: “We’re in an America where in this particular place haven’t the flames been fanned by the media, you know talking about an unarmed black teen shot by a white police officer.”

Political commentator Alan Colmes: “Well, that is what happened, that’s a fact."

Jon: "Well, that's what happened, but we don’t know the sequence of events."

"What the real problem is, is failing schools that the liberal democrats won’t let them escape from, families that are never created or are dissolved, and an attitude of victimhood. Now the head of this network Roger Ailes has brilliantly said if you see yourself as a victim you become a victim, but if you see yourself as a winner then you’ll eventually win. That's the attitude that needs to be inculcated in every person, whether they are black or Hispanic or white in this country."

"We all come at this as we used to say on our old news watch program, with our own templates: white people look at the looting, they look at the liquor store people bringing out all the booze and laughing it up and attacking reporters; African-American people look at it with a different template."

"It seemed like some networks really wanted to draw parallels between this and the Trayvon Martin story down in Florida which, by the way, rated well for them."

“The president interjects in these local issues and at times it seemed made it worse. I mean, watching the side by side of the president talking last night, I don’t know if he’s just so irrelevant that people aren’t listening or he’s making it worse ... he didn’t help when it came to inflaming racial tensions."

"Last week [Obama] said, I want to make sure police are trained so they can distinguish between a gang-banger and a kid who just happens to be wearing a hoodie, but otherwise is a good kid and isn’t doing anything wrong. Michael Brown wasn’t wearing a hoodie. He was wearing a distinctive red ball cap. He is on video putting his hands on a store owner. We need the truth."