Rula Jebreal: Why America is losing the war on terror -- and the Islam debate is so flawed 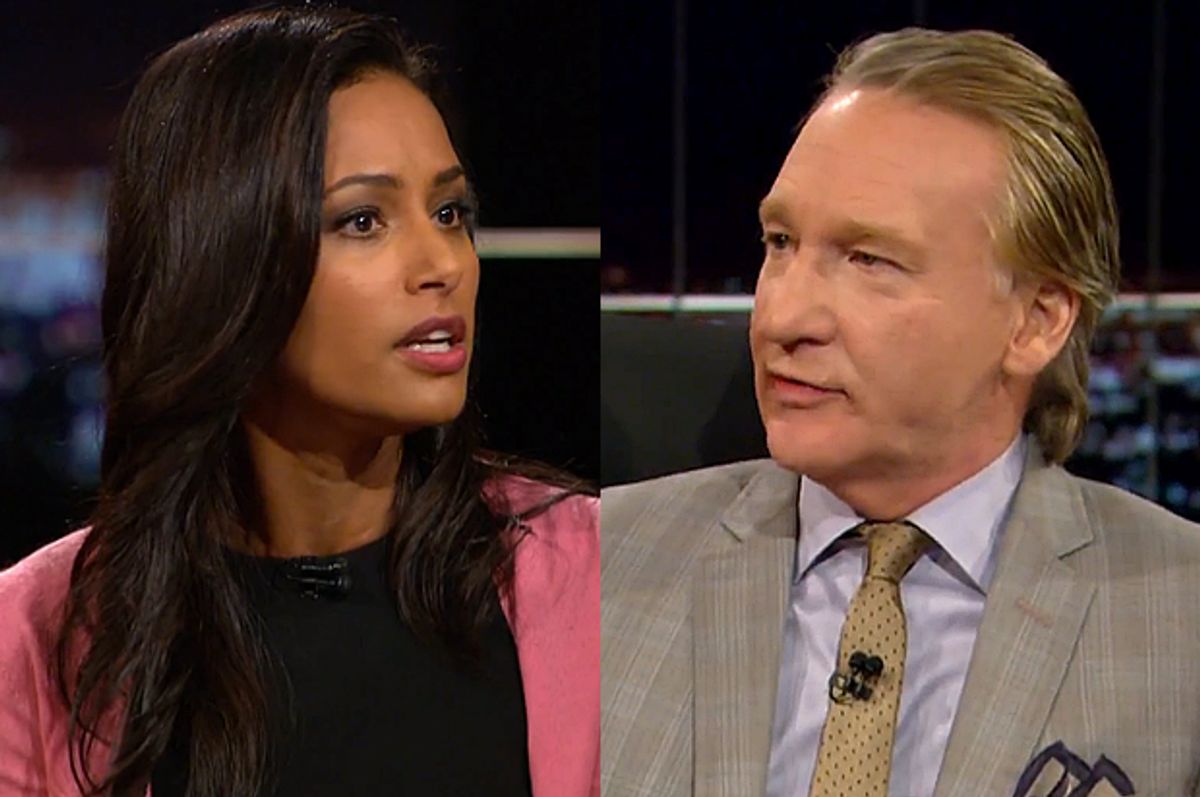 America is losing the longest war in its history. An enemy that had comprised a couple of hundred desperate men hiding in caves in eastern Afghanistan when the “war on terror” got underway following the 9/11 attacks is incarnated today as 20,000 fighting men in the Islamic State movement. And far from hiding in caves, ISIS has brazenly raised its black flag over vast swaths of territory in Syria and Iraq – countries that, in 2001, had been two of the most secular societies in the Middle East.

Thus the fruits of the trillions of dollars and thousands of American lives – and hundreds of thousands of unnamed innocent civilians in the Middle East and Asia – devoured by the war on terror, which the Obama administration now says could rage for another 30 years.

Given its costs, consequences and failures, the war on terror has provoked remarkably little sensible public debate in the U.S. The country that congratulated itself for having killed Osama bin Laden has not asked itself why that fact seems to have mattered so little to the trajectory of the conflict. And politicians and pundits have been largely indifferent to the devastating consequences of U.S. intervention  in Afghanistan, Iraq and Libya.

Only when jihadists began disseminating macabre, but well-produced videos of the brutal decapitation of American captives did U.S. attention turn, once again, to Iraq and Syria. Desultory military strikes followed, but little explanation to the American people about what has gone wrong -- except, perhaps, among TV info-tainers such as Bill Maher, who insist that the problem lies within Islam itself. It may be comforting to see the ISIS phenomenon as determined by theology rather than the result of mass regional and American incompetence.

It's conventional wisdom among the Arab world’s secular democrats to view ISIS as a byproduct of the U.S. invasion of Iraq. We wrecked a country,  destroying its institutions and security forces, creating a vacuum that drew in jihadists from across the globe. Al-Qaida had not operated in Iraq before the invasion; it moved in after the invasion, setting up shop in the Sunni communities antagonized by the U.S.-led occupation. Similarly, ISIS has exploited the alienation of the Sunni population from the sectarian Shiite-led government of Prime Minister Nuri al-Maliki to gain control of much of northern and western Iraq.

After U.S. combat forces withdrew, Maliki rounded up the very same Sunnis who had helped the U.S. rout al-Qaida in 2008, treating them as a threat to his own power rather than as partner in a new post-Saddam political order. Maliki’s attacks on Sunnis created a permissive environment for ISIS, with the Sunni forces that had expelled al-Qaida now seeing little incentive to fight its progeny.

In Syria, ISIS has profited from the failures of others, presenting itself as the most dedicated and implacable foes of the Assad regime as its superior weaponry and funding allowed it to rapidly eclipse the poorly armed, perennially divided secular rebels. The protracted stalemate in Syria’s civil war has empowered the extremists in the rebel camp – a trend that has been exacerbated by the U.S. bombing ISIS while leaving Assad’s forces free to rain down terror on Syrian civilians.

Ordinary Muslims throughout the Middle East are paying a horrific price for the rise of ISIS, yet some American commentators would have them find the source of their suffering in their own religion.

“How many mass rallies have been held against ISIS in the Arab world today,” asked Fareed Zakaria in the Washington Post in October. A fair question, but the answer is an indictment of Arab rulers: There are precious few countries in the Arab world where citizens are currently free to hold a mass rally about anything. And the reason for that, of course, is that if citizens were at liberty to express themselves, they’d likely focus on mass unemployment, corruption and the authoritarianism of their rulers before they turn to the problem of ISIS.

The secret police of those same Arab countries have often been a central ally in the war on terror, enabling U.S. security services to outsource some of the abuse of suspects. But even U.S. institutions have engaged in interrogation techniques that would horrify many Americans -- indeed, the Obama administration has worked hard to stop the release of a Senate investigation into torture by the CIA.

Detainee abuse is not a peripheral issue when discussing ISIS. The prison cells and torture chambers of the Arab world have long served as incubators of implacable jihadism, whether the jailers worked for Mubarak, the Saudi royal family, Saddam, Gadhafi or even the U.S. Modern jihadism, in the person of Sayyed al-Qutb, was born in Egypt’s prisons, which also produced al-Qaida’s current leader, Ayman Al-Zawahiri. Abu Musab al-Zarqawi was said to have lost his toenails under torture in a Jordanian prison long before he became the leader of al-Qaida in Iraq, while ISIS leader Abu-Bakr al-Baghdadi spent four years in U.S. custody at Camp Bucca in Iraq.

As former Camp Bucca compound commander James Gerrond noted, "Many of us at Camp Bucca were concerned that instead of just holding detainees, we had created a pressure cooker for extremism." So, too, the violence America’s allies direct at their own citizens, both in prison and on the streets.

The suppression of nonviolent opposition by Egypt’s President Abdel Fattah al-Sisi makes a self-fulfilling prophecy of the “terrorist” threat he invokes to justify killing hundreds of unarmed protesters, and jailing more than 20,000 supporters of the Muslim Brotherhood, whose Freedom and Justice Party won Egypt’s first two democratic elections. Thus the cautionary tale in the story of Omar Mustafa, erstwhile member of the April 6 movement who had worked in the presidential campaign of the secularist Mohammed ElBaradei, and who died fighting in an Islamist militia in Libya. The idea that a popular political party can simply be violently stamped out is not only hopelessly misguided, it is extremely dangerous.

Absent any legitimate channels for expressing their views, many young Egyptians will conclude – as they have done in the past – that violence is the only effective option. The next generation of Zawahiris, Zarqawis and Baghdadis are right now honing their hatred in Egypt’s prisons. And while many Americans prefer to turn a blind eye or blame Islam, in the eyes of the victims we are deeply complicit.

America’s own treatment of detainees is a central theme in extremist propaganda. Internet jihadists are constantly disseminating accounts of detainees’ experiences,  mindful of their power as a recruiting tool. One of ISIS’ most symbolic strikes in Iraq was an assault on Abu Ghraib that freed all detainees. Nor is it a coincidence that in their beheading videos, ISIS dresses its American captives in Guantanamo-style orange jumpsuits.

President Obama’s air campaign against ISIS won’t be effective unless it addresses the conditions on the ground that favor the extremists. But the U.S. finds itself balancing the competing demands of the Gulf states, Israel, secular dictators and U.S. business, leaving it more ensconced than ever with Arab regimes whose own policies fuel the jihadist surge. More than a new defense secretary, America is in need of new policies.

It is a self-serving evasion to blame ISIS on Islam per se, which is also the belief system of most of its victims. But there certainly are competing currents within Islam. In that respect, though, it’s important to remember that ISIS, and al-Qaida before it, have drawn theological sustenance from traditions that predated them, particularly the Wahhabism that is effectively the theology of the Saudi state.

Washington hails Saudi Arabia as a key “moderate” Arab ally despite the fact that the kingdom exports an extreme, puritanical, sectarian interpretation of Islam that established the theological parameters taken to extremes by groups like ISIS. Saudis have funded jihadist enterprises in Afghanistan, Pakistan, Syria, Iraq and Yemen; beheadings are a routine part of the Kingdom’s jurisprudence.

Arab Muslims who embrace the American ideal of secular liberal democracy have long been confused and frustrated by U.S. support for regimes that are the antithesis of that ideal. Hopes that the fall of Mubarak would end U.S. backing for dictatorships faded quickly as the Obama administration threw in its lot with the counterrevolution, leaving America back in the company of despots committed to policies that U.S. officials had long warned would nurture terrorism.

The Arab Spring had initially sidelined the extremists, by opening a democratic space for a politics of dignity and inclusion. Political Islam proved to be a popular player in that democratic space, and while it made some catastrophic political mistakes in Egypt, it maintains far deeper roots in the citizenry than do most of the liberal parties. That’s why integrating the Islamists into a political system in which the security forces enforce the rules but don’t dictate the outcome still holds the best hope of moderating those parties. Attempting to violently suppress not just the Muslim Brotherhood itself but also the democratic space in which it flourished is a recipe certain to reproduce extremism.

The ISIS ideology can only be negated by an alternative vision that offers dignity, security and participation to all. Tunisia, where Ennadha looks set to lose legislative elections – and accept the result –  is a working example of an alternative political Islam to that of ISIS, and an alternative approach to power to that of Egypt’s generals.

America’s intellectuals bear an urgent responsibility to question failed policies and move beyond a self-satisfied monologue about the problems of Islam -- and to open a productive dialogue that includes Muslim voices speaking uncomfortable truths. Our common security depends on it.