Hannah Horvath is an existentialist: Talking to the authors of "Girls and Philosophy"

The philosopher duo on feminism, child sexuality and why we shouldn't get mad at Lena Dunham 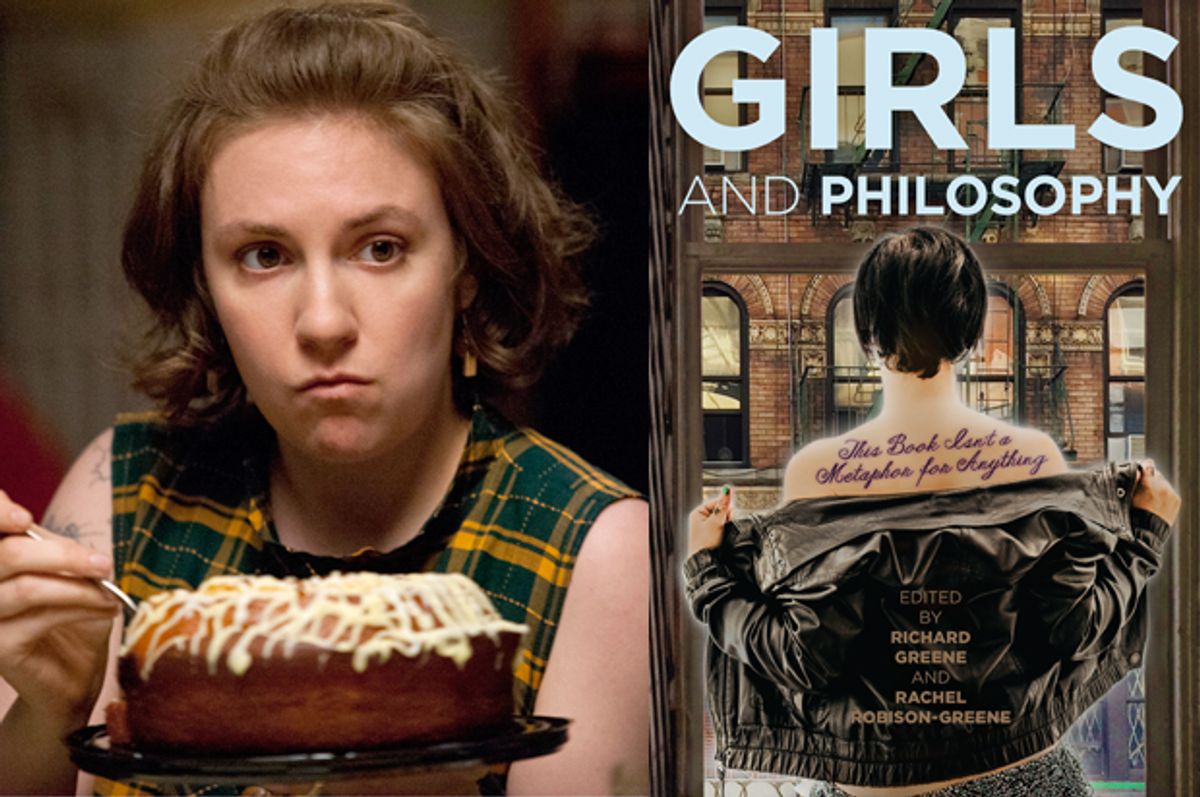 Husband-and-wife duo Richard Greene and Rachel Robinson-Greene are serious TV and movie buffs. They are also philosophers. Thankfully they’ve found the perfect way to combine their seemingly divergent interests, by teaming up to edit a series of books within the extensive, 86-volume "Pop Culture and Philosophy" series, which includes outings on everything from "The Good Wife" and "Homeland" to the iPod and the Atkins Diet.

Their newest effort is "Girls and Philosophy" which features essays like "What 'Girls' Teaches Us about Millennials and the Meaning of Life," "Chinese Philosophy Looks at 'Girls,'" and "The Q-Tipping Point of Anxiety," probing the world of Hannah Horvath for the deeper ideas that stir beneath. We talked to Richard and Rachel via speakerphone from Utah -- Richard is a professor of philosophy at Utah's Weber State University, while Rachel is a PhD candidate at UMass Amherst -- about Marnie's authenticity, Jessa the existentialist, and why we shouldn't get mad at Lena Dunham.

What made you choose to write a book about "Girls"?

Rachel: “Girls” is a good show for dealing with issues in social philosophy and feminism. Because the characters are not always the best examples of good moral agents, it raises some interesting moral questions as well.

Richard: And a lot of an existential theme. Most of the main characters of the show aren’t very likable and are train-wrecks of human beings, so that made it particularly fun.

"Girls" in particular is so culturally freighted, it’s become kind of a punchline in a way. Did you consider that when you were publishing the book, how you’re sort of playing into the criticisms that maybe we give Lena Dunham’s words too much weight?

Rachel: I’ll just be bold and say I don’t think we give Lena Dunham’s words too much weight. I think Lena Dunham’s a genius and I think "Girls" is a fantastically written show. So I guess yeah we’re getting involved in that general discussion and for me I’m just firmly on the side of I think she’s fantastic.

Richard: Same here. And worthy of great amounts of respect.

There's been a lot of hubbub lately stemming from Lena Dunham's autobiography about whether she molested her sister when she was a child. As philosophers, do you have any thoughts on these allegations?

Rachel: I just have to say, I’m an ethicist, that’s my area and I think it’s pretty much universally agreed among ethicists that children aren't fully developed moral agents. So she’s describing something that happened when she was a child; I think people need to keep that in mind. Now how she goes on to describe it as an adult might be a different matter. Neither of us have read the book; we can’t comment on that. But I do think that everybody, regardless of the issue, moral analysis of anybody's behavior should be mitigated to a certain degree when we’re considering if that person that we’re talking about was a kid at that time. And that’s reflected in our criminal justice system and everywhere else. We don't think kids are fully morally culpable for what they do.

Richard: And the extent to which someone might become a target purely by virtue of the fact that they’re politically on the left and popular and folks want to knock them down a peg. So I don't know if in the media you get anything like a fair discussion of the issue. Because of Lena Dunham’s iconic status and the strong desire at the end of the political spectrum to sort of squelch her and tear her down.

Rachel, you write in the collection about why we shouldn’t get mad at "Girls" for not being more inclusive or representative.

Rachel: Yeah, and for me it addresses the extent to which the show is trying to be authentic; I just think authenticity is key. There are some concerns -- and let me be clear that I think the concerns are warranted -- that there’s not enough representation of minority groups in television shows. Because I saw some criticism of Lena Dunham saying she didn't include enough people of color and when she does include people of color the story seems fabricated or it seems like she doesn't have enough experience. So again although I agree that there needs to be more people of color on TV I don’t think that the right response is to try and get our talented writers, to try and force them into an experience where they’re writing inauthentically.

Because if that’s not the experience that Lena Dunham has then she’s not going to write about it authentically. So I think the moral requirement becomes for networks to pick up shows that are written authentically by people of color and not just getting the lives or experiences of people of color through people who don't know what they’re talking about. And the same is true I think with other criticisms of the show.

There’s an essay in the book where the author talks about Jessa being an existentialist. How would you classify the other girls, philosophically?

Rachel: Well, I mean, I guess I think almost all of them are existentialists.

Richard: Jessa’s sort of well on her way to being kind of a Nietzschean Übermensch in a broad sort of way.

Rachel: I think the show is about authenticity, which is why the fact that the characters are really flawed isn't problematic for me in terms of feminist appeal or anything else. Because it’s about people being who they are, even if that sometimes isn't a great way to be. But I think they’re all pretty existential.

Richard: Marnie and Shosh, there’s something authentic about them because they’re trying the way they are and they’re a product of something, but there’s something inauthentic about both of them purely by virtue of the fact that they are a product of these things; both of them kind of bought into the thing that you should appear a certain way. I think for Marnie what’s really important is being in a relationship and to fill out the category of being in a relationship, and having a career and being able to mark the "successful" box.

Rachel: There are moments of reflection throughout the show, though, where they kind of recognize their inauthenticity, and that's what gives us the experience crisis as a result of that.

What are some other themes you notice that come up in close readings of "Girls"?

Rachel: And issues in feminism are all over the place. But I don’t think this has as many metaphysics themes or epistemic themes as some of the other books; it is primarily about... with regard to social justice too, we have a paper in the book about expectations that we have out of millennial young people trying to find themselves in internships, and the fair treatment of people who are very young in their careers.

Richard, your essay in the book is about "Girls" and how it can’t be "spoiled" in the sense of giving away plot points to someone who hasn't seen something. Do you think spoiler culture has gone too far?

Richard: I thought the show is kind of the exception to the spoiler stuff because part of the appeal of the show is nothing ever happens. Kind of like "Seinfeld' being a show about nothing. The beauty of it is the inane conversation, like the episode where they’re all at Marnie’s beach house and the conversation devolves into this fight.... That is so perfectly done, and nothing interesting happened other than you just go "I cant believe what these people are saying to one another." The idea is there are certain things that if people haven't seen them in a couple of years then it’s their tough luck, then there’s the category of things like, if I were to tell you before seeing the "Empire Strikes Back" that Darth Vader is Luke’s dad, that seems horrible. So you have these conflicting intuitions like I did and put them in an account.

Do you guys have favorite characters or ones you most identify with?

Richard: Well, Hannah and Adam are sort of the obvious choices.

Rachel: I’m probably most like Shoshanna, most of the time.

It’s funny that, just as people used to do with "Sex and the City," they’ll ask "which girl are you?" when the characters are all so fundamentally deplorable.

What’s next on the docket for you guys?

Rachel: We’re currently working on "Orange Is the New Black," and that has similar issues. We like the feminist issues.

Richard: That will be coming out later in 2015 and we just talked to the publisher about doing three other books. We want to do something on "The Princess Bride," "Orphan Black" and, in the event that the new "Twin Peaks" series gets made we’ll do one on "Twin Peaks." But the one that we’re dying to do that the publisher doesn't seem interested yet is "American Horror Story."

Do you guys have any hopes for what issues "Girls" might address in the next season?

Rachel: Well, obviously there was that cliffhanger at the end about her going away to graduate school, and that would change the show dramatically.

Richard: I would like to see them drop a number of sort of recurring story lines; I think Marnie’s existential angst -- I think they’ve done that to death, unless they can change the characters quite a bit. They’re a certain age where that wouldn’t be improbable. But the things that have kind of gone wrong, it would be nice to just look into it. So Adam and Hannah, for example, if that begins to get into one of those Sam-and-Diane "will they get together, won’t they get together" things over the course of the show, it would be terrible.