American history in black and white: Ferguson and our nation's cognitive divide

If the Ferguson tragedy offers a vivid reminder of our bitter divisions, it also offers moments of revelation 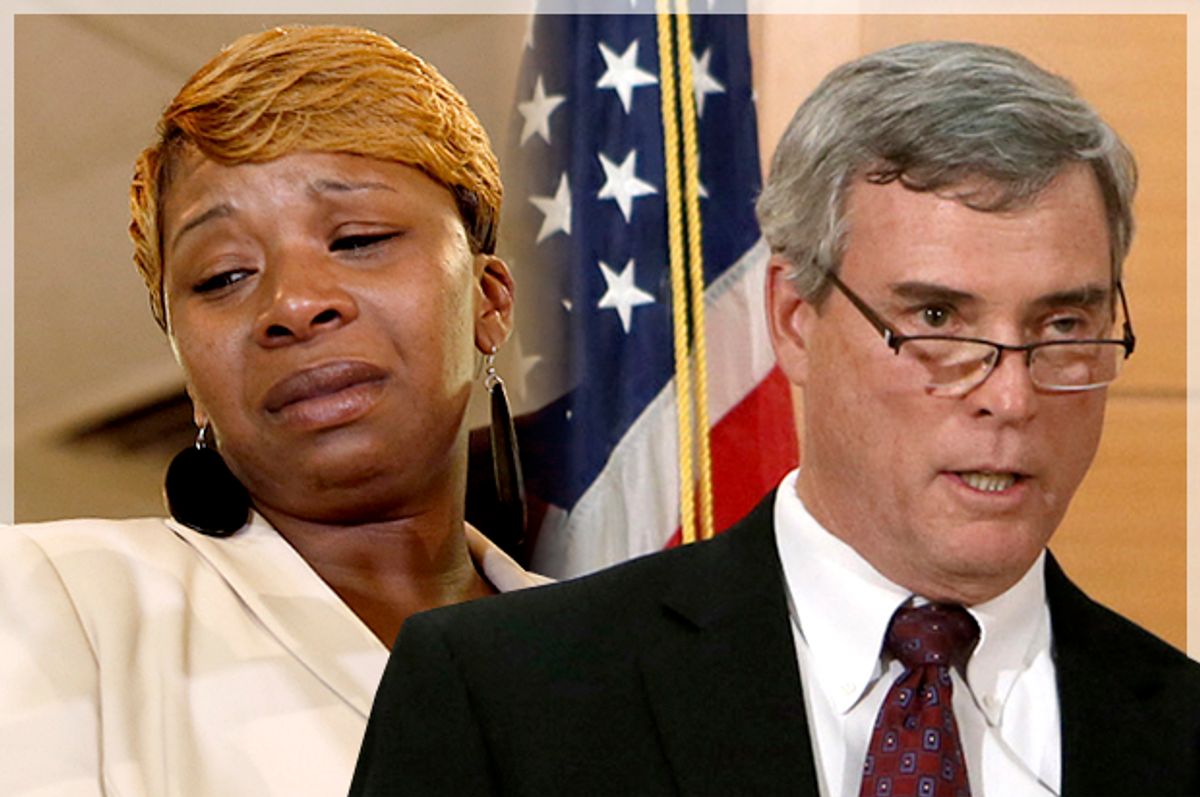 It’s a painful truism to say that white Americans and black Americans do not live in the same country, or at least do not perceive their country in the same way. What’s even more painful is that this truism remains largely true, even in an age when the cultural and historical narrative of the United States has altered course and become much more complicated. We were reminded of that with renewed force this week, just in time to infuse the Thanksgiving holiday with a mood of gloomy, tense reflection. (If you take the longer historical view, that may be entirely appropriate to the season.) We have multiple overlapping stories in 21st century America, and at least some of them offer us reasons to be thankful. We have the story of the conflict between immigration and nativism -- which goes back nearly 200 years, but gets renewed every few years with every group of newcomers – and the newer story of a multicultural, multiracial and multilingual society in which one person in four is neither “white” nor “black,” in the conventional usage of those words.

Latinos and Asian-Americans and the growing number of people of mixed race would seem to have no clear position in the old, traumatic story of America as a binary society of black and white. Sometimes we try to convince ourselves we have shaken free of that old dichotomy and have moved into a different era, or are about to do so. (It is mostly white people who try to convince ourselves of this, in fairness.) Yet it remains a central driving force of our nation’s internal anguish, even 150 years after the end of slavery and 50 years after the end of legal segregation, and even when most of us are bored by the fact that the current president sinking into the conventional mire of second-term unpopularity is a biracial man with an African name. The historical change that represents is real, but it has not been enough to unwind the fundamental contradiction between the way whites and blacks understand the nature of American society.

You could ask for no clearer example of that contradiction than the turmoil resulting from the August shooting of Michael Brown in Ferguson, Missouri, and this week’s decision by a St. Louis County grand jury not to charge Officer Darren Wilson with any crime. A new round of angry street protests has erupted in Ferguson and many other places, and as I write this the energy and outrage of those protests has clearly not yet dissipated. Ferguson is of course not an isolated incident, but it may well be remembered as a watershed moment. We have seen case after case involving unarmed black men shot by police in dubious or disturbing circumstances, with little or no accountability. But that’s only the most obvious and tragic aspect of the problem, and beyond that lies a mutual incomprehension whose consequences may be broader and deeper: White people and black people tend to see these incidents through entirely different prisms, and understand them in different ways.

We have seen some dramatic and shocking things unfold in Ferguson, beginning with a black man lying dead in the street for hours, moving through the exaggerated, military-style police response to the protests and culminating (for now) in a grand jury investigation clearly steered toward its conclusion by a prosecutor eager to avoid the public trial of a police officer. But the deep and tragic truth beneath Ferguson is that none of it felt especially surprising. These events involved real people, real streets and the real case of a young man’s all too recent death, but they also felt archetypal, like scenes from an endlessly recurring nightmare.

After the first wave of protests in Ferguson late in the summer, I wrote that the images of the Brown shooting and its aftermath illustrated the truth of Faulkner’s maxim that the past is not dead, and isn’t even past. But that is not a universally accepted truth. Americans do not agree about what happened in the past and how to think about it, or about whether history provides a useful guide to present-tense events. For many white Americans, our nation’s agonized racial past is indeed dead, a bad dream to be forgotten and washed away by the bright light of day. History remains available in sterilized storybook form, as a source of inspiration and heroic example, but never as a living realm that defines and encircles us.

One aspect of the willful racial blindness often called “white privilege” is the collective insistence that an event like the Brown shooting must be considered on its own in some Platonic void, as an isolated forensic and legalistic question unconnected to any larger historical pattern or to issues of race, culture and power. Such an imaginary perspective is understood as “neutral” and non-racial, rather than in itself a view conditioned by race. History’s bunk, the bad stuff that happened long ago no longer matters (and perhaps wasn’t so bad in the first place), and race is irrelevant. Except, of course, when it isn’t: Those who persist in noticing that Brown was black and Wilson white, and that violent encounters of this kind seem to repeat themselves with distressing frequency, are the real racists who refuse to accept the disinterested, impartial and normal perspective of whiteness.

For African-Americans, on the other hand, it is clearly not possible to separate the pain of Michael Brown’s death, and the inescapable conclusion that the lives of young black men are held in low regard, from the pain of history and memory. The question of exactly what happened between Wilson and Brown on that street in Ferguson, and why one of them wound up in the cemetery while the other walked away and now gets to move on with his life, is part of a much longer story of white fear, white hatred and white violence inflicted on black bodies. That story includes the list of black men and black boys who have been killed by panicky cops just this year, for bad reasons or unclear reasons or no reasons at all. It includes the black men hanged by mobs from poplar trees in the town square during the last century, that “pastoral scene of the gallant South,” in the words of “Strange Fruit,” the Abel Meeropol poem and song made famous by Billie Holiday. It includes the men brutalized or killed for resisting the tyranny of slavery during the century before that, or simply killed because they had displeased someone who held power over them, and because they were property and had no rights.

Which of these perspectives on American history in black and white is more “fair,” or more “just”? Which contains more of the truth? Questions like that depend entirely on what we think those words mean. Look around you at the vast racial disparity reflected in public opinion polls, in social media and in the vitriolic comments on Internet articles (including this one, no doubt), and you can only conclude that our definitions of fairness and justice and truth are also conditioned by race and by history. Is it fair to connect what happened between Michael Brown and Darren Wilson to long-ago crimes whose perpetrators and victims are long dead? When it comes to the specific question of Wilson’s guilt or innocence, probably not. But is it fair to decouple every single such incident from history, to pretend that we are fully enlightened beings who have left all patterns of bigotry and racial hatred and institutionalized police violence behind us?

Before the news of the Ferguson grand jury decision broke, I had already begun composing a more personal Thanksgiving column about my gratitude for the peculiar cracks and fissures in the official narrative of history that serve to illuminate the whole, sometimes for good and sometimes otherwise. My examples ranged from Edward Snowden in Sheremetyevo Airport to George Wallace’s late-career alliance with Shirley Chisholm to Richard Nixon’s famous White House meeting with Elvis Presley (soon to be a movie with Kevin Spacey and Michael Shannon). As a child of the 1970s, I would argue that entire decade was just such a fissure in history, from the OPEC crisis to Rose Mary Woods and the missing 18 1/2 minutes to Jimmy Carter’s cardigan to the mustaches of the Swingin' A’s. Ferguson is too momentous, too tragic and too familiar to be such an event, but one aspect of it had that odd, revelatory quality.

It does no good to pretend that you or I or anyone else, no matter how wise and how liberated we believe ourselves, is entirely immune to the polarized racial discourse around American history and justice and fairness and truth. Personally, I could feel the seductive allure of the whiteness worldview beneath St. Louis County prosecutor Bob McCulloch’s extended “mansplainer” performance the other day, when he went on at such length about how contradictory the eyewitness testimony was and how the physical evidence all tended to exculpate Officer Wilson. It was a masterpiece of monumental dullness, meant to reassure and to bore in equal measure, to bury the listener beneath a mountain of thoroughly sifted minutiae and a bluebottle-buzz of mildly irritated Midwestern impartiality. McCulloch sounded like a high school principal explaining that some people had ruined last Thursday’s pep rally and there would definitely be consequences.

In all honesty, I felt tempted to surrender to the enshrouding bewilderment, as McCulloch evidently persuaded the grand jury to do, and conclude that reasonable people had reached the reasonable conclusion that this situation was impossible to figure out and that no crime could ever be proved. It’s less painful to decide that the system did its job OK and that we have to shrug this episode off as a bad thing that happened for unclear reasons and move on – well, this episode and any number of others – than to confront the systemic problems of police racism and police violence. Again, I am not prejudging Wilson’s specific case, and it seems unlikely that he could have been convicted of any major crime under Missouri law (which is a different manifestation of the problem). But the larger point is that separating out and individuating the Brown-Wilson story and every case like it, in order to avoid noticing the larger pattern, is the white person’s way.

As Noam Scheiber of the New Republic puts it, it appears that McCulloch abused the grand jury process in order to cover his own ass, staging and manipulating “a pre-trial trial in order to vindicate his personal view of Wilson’s innocence,” but without having to assume personal responsibility for declining to indict him. And then he went out there to that podium, suspiciously late in the day (as if to guarantee that those people out on the streets would be the ones most likely to get rowdy) and assured the normal, neutral white people out in normal, neutral white-world that they also had no responsibility for what had happened or how it was dealt with. The point was not what McCulloch actually said, since he spoke for 45 minutes without saying much of anything. The point was the signal he sent to one side of America’s racial divide: We have successfully buried this one in whiteness, just like the last one, and the one before that. The disruption is only temporary. It will all go away.