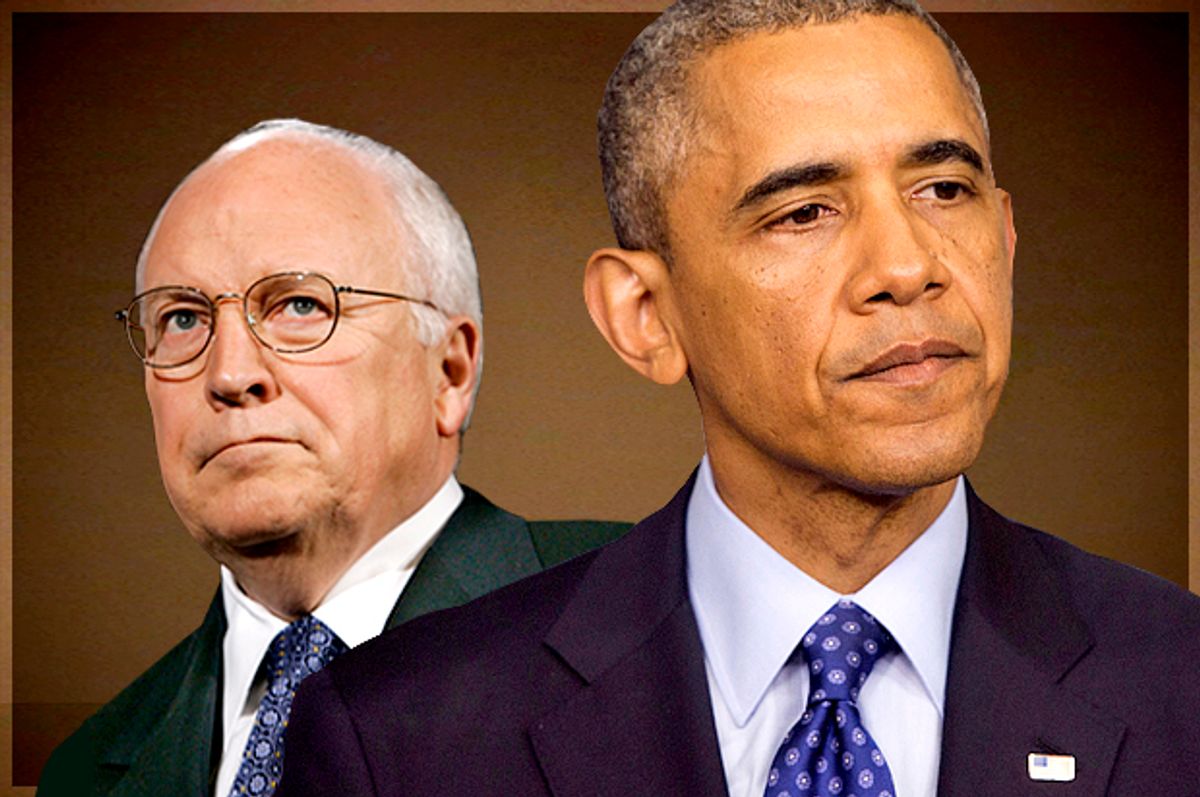 A few hours before the president announced his landmark executive actions on immigration policy, a decision that was not only constitutional but likely to stand among his greatest accomplishments, the Huffington Post ran an article on a different Obama administration initiative. The contrast between the president Americans saw that night on their televisions and the one depicted in the HuffPo report could not have been more striking — or more representative of the bewildering mix of ecstasy and anguish that’s characterized the last six years.

What HuffPo found in its article, which was buried by the immigration news and has gone unnoticed by most, is that the same administration that’s tried to define itself as thoughtful and humane was, behind the scenes, doing everything it could to shield war criminals from justice. Once again, the White House was thwarting a release of the Senate Intelligence Committee’s controversial and much-delayed report on the CIA and torture. And once again, the White House’s worries centered on protecting the CIA — and its former professional waterboarders — from public scrutiny and censure.

The dynamic wasn’t new; the administration had been concocting reasons to block the public release of the committee’s findings for years. What was new, however, was the calendar. After eight long years — six under President Obama — the Democrats’ time in control of the Senate was running out. And while the Dems’ commitment to informing America of the horrors perpetrated in its name has never been ironclad, it’s certainly made of stronger stuff than the GOP’s. Sen. Richard Burr, the likely head of the Republican-run Intelligence Committee, is an unabashed critic of the report and supporter of torture. It’s hard to imagine him releasing the Senate’s findings if the committee’s current head, Sen. Dianne Feinstein, doesn’t.

The White House knows all of this, of course, just as it knows that its lead negotiator, Chief of Staff Denis McDonough, has come to be seen by many senators as the de facto Man from Langley. That’s why soon-to-retire Sen. Jay Rockefeller told HuffPo that the administration’s latest complaint — that giving alleged CIA torturers pseudonyms was not enough, and that entire chunks of the report’s timeline should be redacted — was the latest proof that the report was “being slow-walked to death.” Because the committee’s work “makes a lot of people who did really bad things look really bad,” Rockefeller said, the White House and the CIA are “doing everything they can” to see it buried. “They don’t want the public to know about it,” he added.

To be clear, the White House’s maneuverings, while representing a significant hurdle, do not negate all options for senators dedicated to making sure this abominable moment in our history is not forgotten. “We have ideas,” Rockefeller hinted to HuffPo, before raising the possibility of simply reading the report’s executive summary on the Senate floor and thus adding it to the Congressional Record (Sen. Mike Gravel did something similar in 1971 with the Pentagon Papers). But Rockefeller also noted that it was unlikely such a last-resort move would be an outright success. “The question,” he said, “would be how much you could read before they grabbed you and hauled you off.” More than a little, perhaps; but certainly not enough.

But regardless of how the Senate’s torture report saga ends, whether it’s with the NSA-friendly Feinstein pulling a “Nixon to China” and defying the spooks, or with more of the situational amnesia that’s spread like wildfire throughout D.C. in the post-Bush years, the fact that it’s been such a long, difficult journey is telling. For while it may be true that McDonough is the point-man for the White House in these proceedings, it’s also true that President Obama not only counts him among his closest advisers, but also runs one of the most centralized and micromanaged administrations in recent history. His right hand knows what his left is doing. And while it may be difficult to believe that a White House willing to brook vicious criticism in defense of non-citizens is the same one trying to protect those who tortured, sometimes to the point of death, that is true as well.

The authority now vested in Barack Obama was once held in the hands of Dick Cheney and George W. Bush. In many arenas, what they’ve chosen to do with it could not be more different. But when it comes to shielding the torturers among us, their sins are much the same. That’s the confounding reality of political power, one too unwavering for even the most audacious to transcend.