The year in TV: These two new shows overhauled the idea of the "modern family"

“Black-ish” and “Transparent” are clearly very different, but they both offer trailblazing takes on family TV 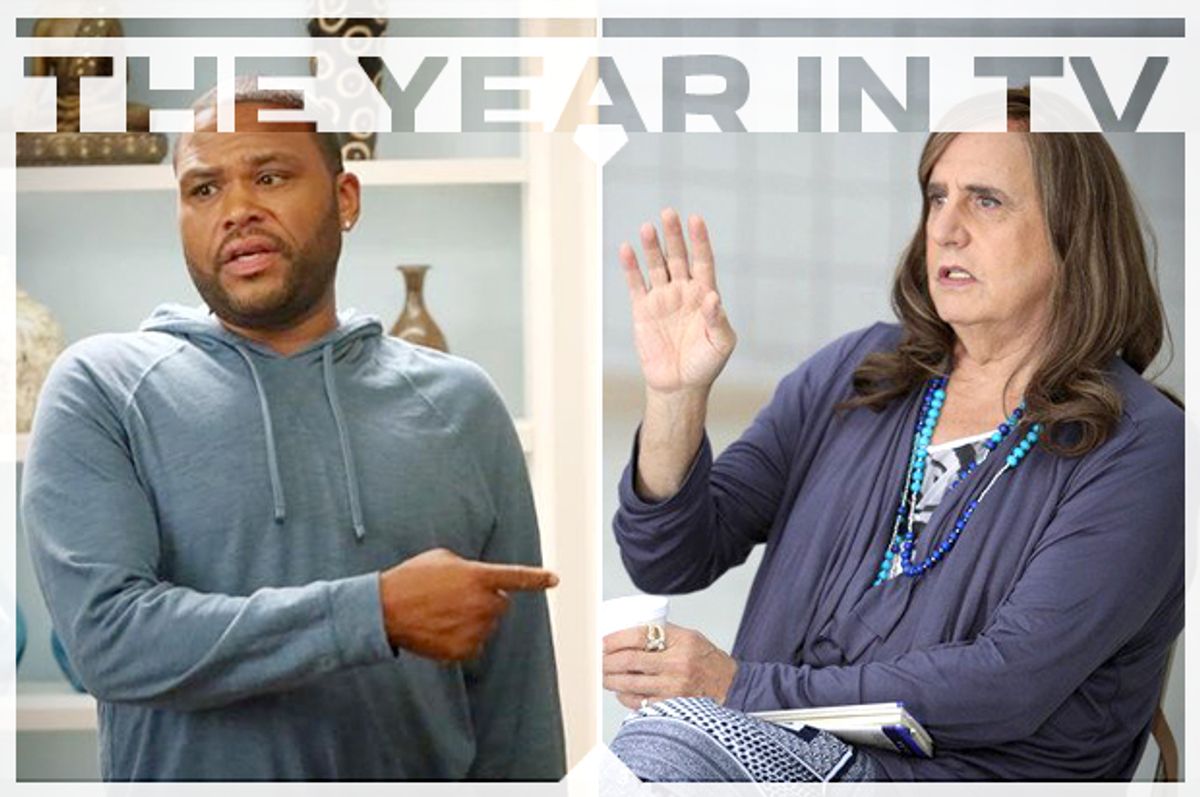 This is the second piece in a series unpacking the shows that broke serious new ground on TV in 2014.

Last week, I wrote about two debut comedies and the way they told their stories about love. This week, I’m writing about two more debut comedies — or, at least, shows that are a half-hour long, and thus are deemed comedies — that explore and blow up the notion of family, with such rebellion that it makes ABC’s “Modern Family” look anything but.

They’re two very different shows. “Black-ish,” in fact, directly follows “Modern Family,” as part of ABC’s very family-friendly and very successful Wednesday night bloc: “The Middle,” “The Goldbergs” and “Nashville” round out the evening. “Modern Family” has one Latina (adult) series regular in Sofia Vergara; “Nashville,” “The Middle,” “The Goldbergs” are whiter than white. Tennessee, the rural Midwest and certain social classes in the ‘80s are that white, for sure; but it’s a programming bloc in sharp contrast to the following night on the same network, where three different shows produced by Shonda Rhimes showcase the most racially diverse casts on television.

Enter Kenya Barris’ “Black-ish,” a show created by and starring black people, on a night with no less than four predominantly white families creating comedy for mainstream American audiences. Just its existence is kind of exciting. It’s this broadening of what it means to be mainstream, ushered into being by a network that is so mindful of the role diversity plays in its growth that it gave Rhimes a whole night of programming and ordered two other sitcoms from showrunners of color.

It helps, though, that “Black-ish” is sharp and bright and funny, conversing with ease about topics that most shows wouldn’t touch with a 10-foot pole. In that sense it’s a lot like “The Middle,” which frankly tackles financial struggle in a world where most shows are set in a bubble of privilege. But where “The Middle” is set in a whole community that’s somewhat forgotten by the rest of the world, “Black-ish” is about being different in plain sight — in the upscale suburbs of Los Angeles, where seemingly every other show is set. The narrator and father of the family, Andre (Anthony Anderson), starts the show by talking about how his son’s request for a bar mitzvah shook his sense of who he and his family were to the core; every episode thereafter is a comical, farcical but relatable examination of what it means to be transforming under your own nose. Anderson narrates with a tone that feels a little like he’s performing for a crowd: The effect is less of a comic performing stand-up and more of a dad telling a really long dad joke to a captive audience; undercutting Dre’s sense of patriarchal superiority is part of the show’s mission statement.

The show “Black-ish” most obviously pays homage to is “The Cosby Show,” in that it’s a show for everyone about a black family. But “Black-ish” is distinctly, elegantly modern: It’s eschewed the multi-cam format that defined “Cosby” for the cleaner style of single-cam, and eschews most production gimmicks in favor of voice-over narration and rarely deployed visual effects. It’s also a sitcom that, like “You’re the Worst,” takes storytelling risks to excellent effect. Sitcoms are more than happy to tell small, funny stories about moving a couch up a flight of stairs or losing your car in a parking garage; they’re stories without too much setup except the general day-to-day frustrations of living. “Black-ish” is trying a lot harder to make its characters’ frustrations situations of a more complex nature. Dre, Bow and their four children are grappling with balancing outmoded traditions with the fear of forgetting who you are. The comedy comes from the absurdity of the notion that any family that knows each other so intimately could really ever forget who and what they are.

“Transparent” is a very different kind of show, at least at first blush. Where “Black-ish” has to deal with the red tape of an old-guard TV network, “Transparent” is an auteur’s production, created for Amazon Studios by Jill Soloway. It’s not indie, because Amazon isn’t exactly strapped for cash, but it feels indie — lyrical and subtle without calling too much attention to it; arty without being self-obsessed. It’s funny, but in a different way from most traditional comedies. “Transparent” surprises the viewer so much that at times, its revelations strike as comic — but then Soloway refuses to end the scene, examining the continuing repercussions of each moment.

Like “Black-ish,” “Transparent” is about a family actively navigating an identity crisis, led by their father figure. In “Transparent,” that figure is Jeffrey Tambor’s Maura, a trans woman who is finally coming out to her family in her 70s after a lifetime of being closeted. Her announcement comes at a precarious time for her children, Sarah, Josh and Ali, who are all navigating crises of their own. All three children are well into adulthood; Ali, the youngest, is in her 30s.

It’s a family in a very different place from the Johnsons in “Black-ish.” The Pfeffermans are, at the beginning of the series, estranged from each other in quiet, unknowable ways. Like so many fantastic prestige dramas, Soloway interrogates each character’s inner life, uncovering their hidden desires, excavating their secrets. But she doesn’t deny them a happy (albeit complex) family life, either. Their affection for each other is a contradictory kind of affirmation: You are not alone, even though we’re the people that so often make you feel alone. It’s an intensely bittersweet notion of family that rings truer to me than most others on television — that understanding that while the Pfeffermans don’t always understand each other, and will likely have many more fights, they will still come home to laugh over dinner with each other. As Willa Paskin wrote in her excellent review of the series: “Change is change, but family is family.”

So when I look back on 2014, these two shows stick out in my mind as two different sketches of what is, in the real world, a changing idea of what it means to be a family, an American family, and a happy family, too. It’s also a story about how families grow up. In both shows, the characters are learning how to be the people they want to be. But because of the age differences between the kids, where “Black-ish” is a show about parents leading their kids through transformation, “Transparent” is a show about five individuals who happen to be related to each other finding a way to transform in their own ways. It feels very possible that the Johnsons will grow up to look like some version of the Pfeffermans — with their own set of prickly problems and contradictions. All happy families are alike, Tolstoy wrote.  All unhappy families are unhappy in their own way. And all families trying to grow up do their best to show up for dinner.