The market will liberate us! Why do we buy these insane lies? Maybe because both political parties feed them to us 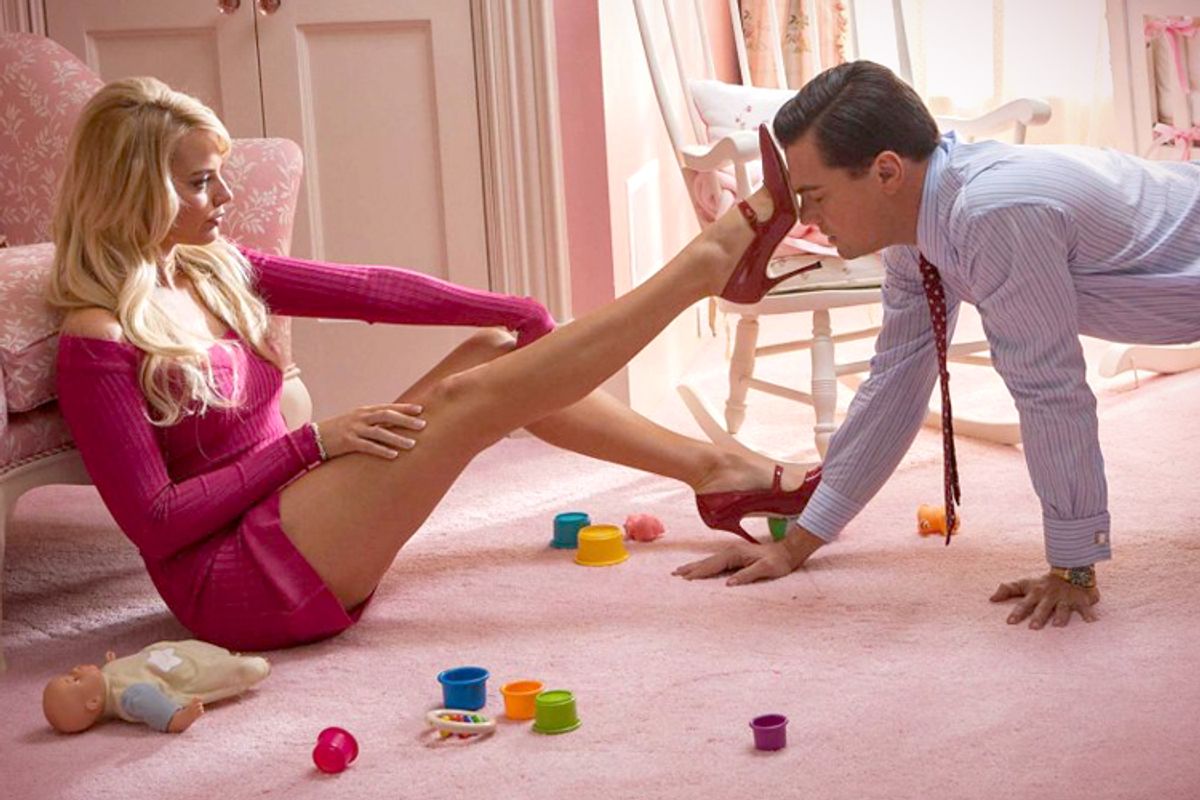 Margot Robbie and Leonardo DiCaprio in "The Wolf of Wall Street"
--

I wrote the following article for the Wall Street Journal as a disgusted look back at the decade of the oughts. In the years since then, a few things have changed. The disastrous stock market trends I report here are no longer in effect—yippee, the Dow is back!—and bank regulators no longer pose for the cameras holding chainsaws to rule books. But the market populism I describe seems to have nine lives. The myths that surrounded it when it was the ideology of governance have been smashed, and yet back the damned thing comes—as a protest movement this time. And the Democrats! It is more than a little dispiriting to remember how easy it was to predict what they would do (and fail to do) with their Congressional power—and how quickly that power would be undone. Oh well. Happy holidays.

Stock-market indices are not much good as yardsticks of social progress, but as another "low, dishonest decade" expires let us note anyway that, on 2000’s first day of trading, the Dow Jones Industrial Average closed at 11,357 while the Nasdaq Composite Index stood at 4,131, both substantially higher than where they rest today. The Nasdaq went on to hit 5,000 before collapsing with the dot-com bubble, the first great Wall Street disaster of this unhappy decade. The Dow eventually got north of 14,000 before the imploding real-estate bubble brought it to grief.

And it was supposed to have been such an awesome time, too! Back in the late '90s, in the crescendo of the Internet boom, pundit and publicist alike assured us that the future was to be a democratized, prosperous place. Hierarchies would collapse, they told us; the individual was to be empowered; freed-up markets were to be the common man’s best buddy.

Such clever hopes they were. As a reasonable anticipation of what was to come they meant nothing, of course. But they did serve to unify the decade’s disasters, many of which came to us festooned with the flags of this bogus idealism.

Before “Enron” became synonymous with shattered 401Ks and man-made electrical shortages, for example, the public knew it as a champion of electricity deregulation — a freedom fighter! It was supposed to be that most exalted of corporate creatures, a “market maker”; its “capacity for revolution” was hymned by management theorists; and its TV commercials depicted its operations as an extension of humanity’s eternal quest for emancipation.

Similarly, both Bank of America and Citibank, before being recognized as “too big to fail,” had populist histories of which their admirers made much. Citibank’s decades-long struggle against the Glass-Steagall Act was once thought to be evidence of its hostility to banking’s aristocratic culture, an amusing image to recollect when reading about the $100 million payday reportedly enjoyed by one Citi trader in 2008.

The Jack Abramoff lobbying scandal showed us the same dynamics at work in Washington. Here was an apparent believer in markets, working to ensure that the garment factories of Saipan kept humming without federal interference, and saluted for his labors by a newspaper there as “Our freedom fighter in D.C.”

But the preposterous populism with which the decade’s malefactors papered over their plunder is only one part of the equation; just as important was our failure to see through the ruse, to understand how our country was being disfigured under the cover of all this liberation-talk.

Indeed, concealing crucial realities from the public was the common theme of at least three of the decade’s signature foul-ups: the hyping of various lousy stocks by Wall Street analysts, the post-Enron accounting scandals of 2002, and the triple-A ratings given to mortgage-backed securities a few years later.

The grand, overarching theme of the Bush administration — the big idea that informed so many of its sordid episodes — was the same anti-supervisory impulse, only applied to the public sector: Regulatory agencies were sabotaged and their operations turned over to the regulated.

The public was left to read the headlines and ponder the unthinkable: Could our leaders really have pushed us into an unnecessary war? Is the Republic really dividing itself into an immensely wealthy class of Wall Street bonus-winners and everybody else? And surely nobody outside of the movies really has the political clout to write themselves a $700 billion bailout.

What made the aughts so awful, above all, was the failure of our critical faculties. The problem was not so much that newspapers were dying, to mention one of the lesser catastrophes of these awful times, but that newspapers failed to do their job in the first place, to scrutinize the myths of the day in a way that might have prevented catastrophes like the financial crisis or the Iraq war.

This particular folly went way beyond the media, though. Recently I came across a 2005 pamphlet by the historian Rick Perlstein berating the big thinkers of the Democratic Party for their poll-driven failure to stick to their party’s historic theme of economic populism. It is a problem I haven’t thought about for some time, but I was struck by the evidence Perlstein adduced in the course of his argument. Again and again, as he tells the story, leading Democratic pollsters found evidence that the American public distrusts corporate power; and yet just as regularly did they advise Democrats to steer in the opposite direction, to distance themselves from what one pollster called “outdated appeals to class grievances and attacks upon corporate perfidy.”

This was not a party that was well-prepared for the jobs of iconoclasm and reconstruction that have befallen them. And as the Obama team muddles onward — bailing out the large banks but (still) not subjecting them to new regulatory oversight, passing a healthcare reform that seems (among other, better things) to guarantee private insurers eternal profits — one fears they are merely presenting their own ample backsides to an embittered electorate for kicking.