Why Ukrainians still care about Lenin

A year after the start of its pro-European revolution, the country is still wrestling with communist leader’s ghost 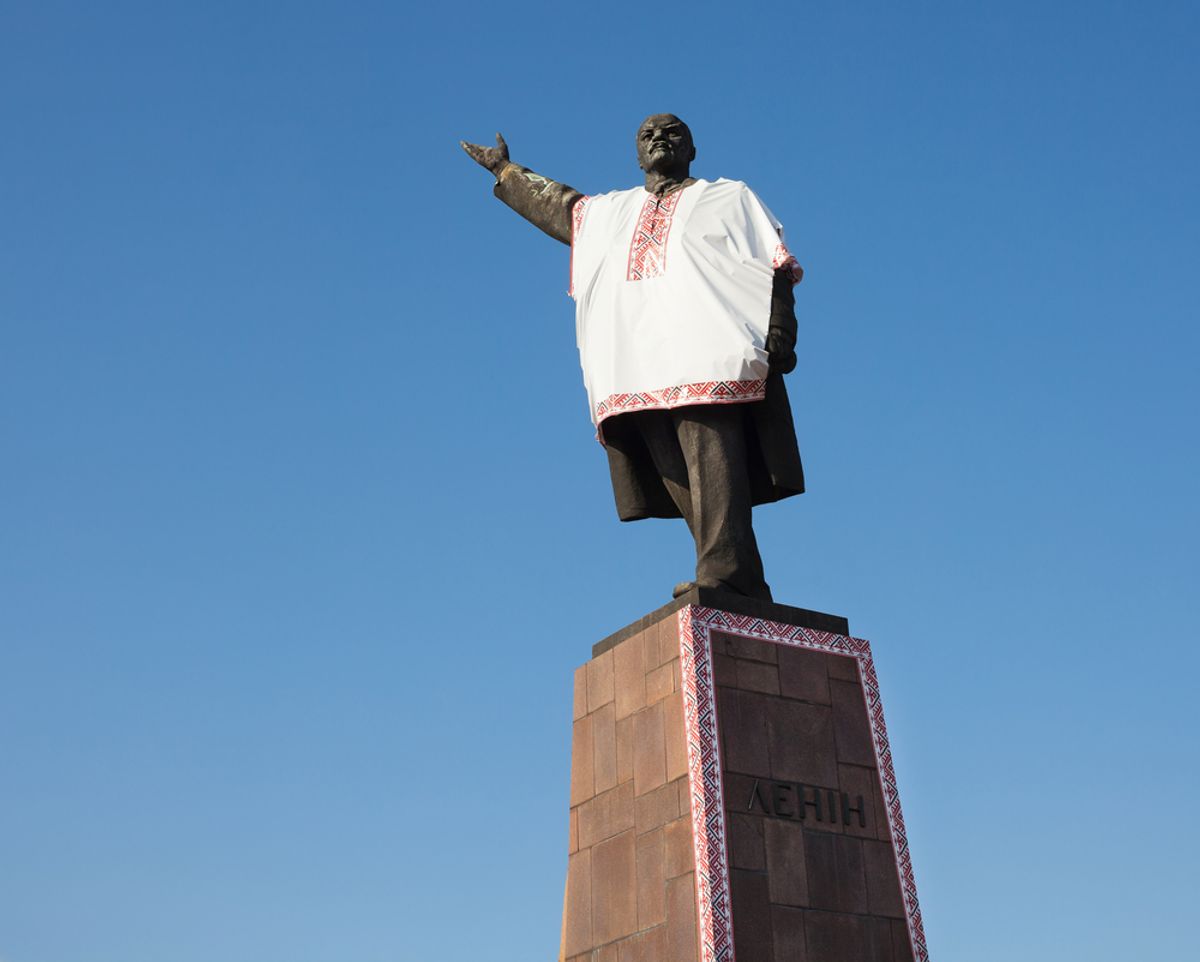 POLTAVA, Ukraine — Before he resigned as governor of this central region last week, Viktor Buhaychuk gave a simple order: get rid of every last remaining Vladimir Lenin statue in the region.

It was part of a controversial wave of so-called "Leninfalls" — the toppling of Lenin statues by protesters and activists — that’s washed over Ukraine throughout the past year. Hundreds have been removed or violently demolished across the country, where they had remained standing two decades after the end of communism.

“Just to destroy and not explain anything isn’t right,” he said in a recent interview.

As Ukrainians this week mark one year since their pro-European revolution broke out, officials and ordinary people are still figuring out how to patch together a traumatized and divided society.

There’s a war with Moscow-backed separatists in the east, a tanking economy and a hugely corrupt state bureaucracy desperately in need of reform.

There’s also Vladimir Lenin, whose toppling in Kyiv became an early symbol of the protests against the ousted pro-Moscow President Viktor Yanukovych. Lenin’s legacy — or rather, how it’s being handled — has become a barometer for how quickly Ukraine can heal its post-revolutionary wounds.

“On one hand, it’s a symbol of separating from the totalitarian past,” says Volodymyr Paniotto, a leading sociologist in Kyiv. “But on the other, it’s a characteristic of a radicalized society using uncivilized methods instead of civilized ones.”

The first casualty in the flood of Leninfalls came when protesters toppled and destroyed central Kyiv’s main Lenin statue early last December, just as the anti-government protests there were heating up.

A handful of regional cities took the cue and demolished their own statues before the nationwide campaign kicked into high gear in February, in the days following Yanukovych’s ouster amid bloody street battles.

Despite criticism from certain corners, the trend has steadily continued since then.

In the past two weeks alone, more than a dozen statues have been destroyed, toppled or removed, according to local media reports and an online database tracking the status of Lenin statues nationwide.

In one sense, there’s never been a better moment for dumping Lenin: Last month, the Communist Party failed to enter parliament after landmark elections for the first time ever.

Although one moderately pro-Russian party managed to gain some seats, the legislature is now overwhelmingly pro-European.

The Kremlin’s aggressive policies against Ukraine have been key for consolidating anti-Russian anger, even outside the traditionally patriotic western and central regions.

For many Ukrainians, Lenin symbolizes Moscow’s centuries-long dominion over their country as much as communism.

For one, it could further alienate the largely pro-Russian population in rebel-held eastern Ukraine that the Kyiv authorities hope to wrest away from separatist rule. Even local officials appear to understand that.

Oleksandr Kikhtenko, the pro-Ukraine governor of the war-torn Donetsk region, stepped out against the removal of Lenin statues earlier this week, arguing that the authorities “need to find other ways” of coming to terms with the past.

“I am not a supporter of fighting with monuments,” he said on Monday during a meeting with local students.

Toppling Lenin also plays into the hands of the Kremlin’s potent state propaganda machine, which casts Ukraine as a “fascist” basketcase in a vicious information war being waged between the two countries.

Russian state media capitalized on the toppling in late September of the main Lenin statue in the eastern city of Kharkiv, Ukraine’s second-largest city, which experienced its own brief but bloody pro-Russia uprising.

Paniotto, general director of the Kyiv International Institute for Sociology, points to a recent poll by his organization that found that 90 percent of the population in eastern Ukraine trusts Russian television.

“This high rate of trust in Russian TV shows that the Ukrainian state, at least for its own citizens, is not winning this information war,” he says.

That’s probably why officials like Buhaychuk feel the need to take a civilized approach.

Although he describes socialism as a “primitive understanding of honesty and fairness,” he wants everyone else — especially older Ukrainians who look back fondly on the Soviet Union — to understand why.

He has recommended film showings, special training for teachers in local schools and roundtable discussions in his region to help hammer home the evils of communism — chief among them, the great famine engineered by Soviet dictator Josef Stalin in the 1930s that killed millions in Ukraine.

“A large portion of people is poorly equipped or unable to recognize their mistakes,” Buhaychuk said. “Only a smart person can analyze for himself, look back into history and say, ‘This wasn’t right, I made a mistake.’”

Although he resigned last week citing his political party’s poor performance in last month’s parliamentary elections, an aide said his order would most likely remain in place.

Buhaychuk isn’t the only politician who senses the controversy.

In Zaporizhya, the capital city of a southeastern region bordering Donetsk, the local authorities hosted a meeting last week of a working group dedicated to “urban toponymy,” according to a statement on the city’s website, focused on settling the issue once and for all.

The officials, historians and civic leaders present agreed on the need to dismantle statues of both Lenin and Felix Dzerzhinsky, the founder of the Soviet secret police.

“In this case, Zaporizhya can become an example of how to do this in a civilized way, having taken decisions within the framework of the law,” the statement read.

It may have helped that local activists gave the authorities a deadline to deal with the issue or apparently risk the forced toppling of the city’s main Lenin statue.

In any case, historical memory will continue to haunt Ukraine as it’s buffeted by post-revolutionary uncertainty — and Russia as it seeks to exploit its neighbor’s instability.

Lenin is only part of the picture. The increasingly visible role nationalism has played in the protest and politics is also contentious.

There’s still no full consensus on World War II-era nationalist groups such as the guerilla Ukrainian Insurgent Army (UPA), venerated by many but criticized by some older generations and Kremlin supporters for their fleeting alliance with the Nazis.

Paniotto suggests that officials and activists look for other ways to consolidate society.

“All these historical topics — Lenin, UPA, and others — only further divide people,” he says.