A glance at developments in Ferguson 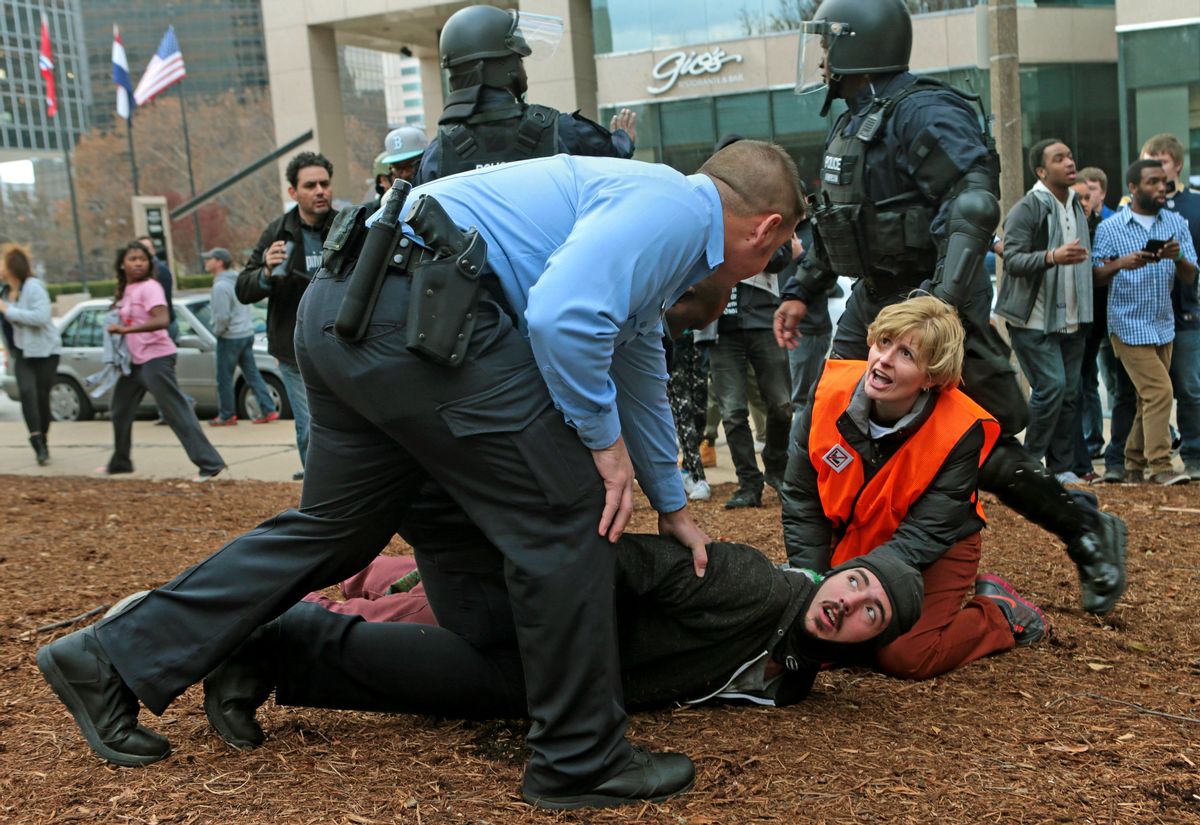 A clergy member assists a protester as he is taken to the ground on Sunday, Nov. 30, 2014, at Kiener Plaza in St. Louis. Protesters and police clashed following an NFL football game between the St. Louis Rams and the Oakland Raiders as protests continued following a grand jury's decision not to indict a Ferguson police officer in the shooting death of Michael Brown. (AP Photo/St. Louis Post-Dispatch, Laurie Skrivan) EDWARDSVILLE INTELLIGENCER OUT; THE ALTON TELEGRAPH OUT (AP)
--

ST. LOUIS (AP) — President Barack Obama planned to hold meetings Monday on the Ferguson situation, and a few members of the St. Louis Rams football team showed their support for protesters who have been rallying in the streets and at retail stores since a grand jury's decision a week ago not to indict the white police officer who fatally shot a black 18-year-old.

Here's a look at the latest developments in the response to the grand jury's decision in the Michael Brown case:

Obama was convening his Cabinet on Monday to focus on his administration's review of federal programs that provide military-style equipment to law enforcement agencies, which drew attention after the police response to the protests since Brown's death on Aug. 9.

During the first Rams' home game since the grand jury's decision, five players stood with their hands raised before trotting on to the field for Sunday's pregame introductions — an apparent show of compassion and solidarity for Ferguson protesters.

Some witnesses had said Brown had his hands up before being fatally shot by Wilson, but Wilson told the grand jury that he feared for his life when Brown hit him and reached for his gun.

Wide receivers Tavon Austin and Kenny Britt came out together first, followed by Cook, Stedman Bailey and Chris Givens. All stood together with hands raised in fog created by a smoke machine.

Coach Jeff Fisher said he'd not been aware the gesture had been planned by the players, all of them black.

The St. Louis Police Officers Association said in a statement, posted by St. Louis TV station KSDK, that it was "profoundly disappointed" with the players and called for them to be disciplined and for the NFL to apologize.

Wilson wrote in his resignation letter that his "continued employment may put the residents and police officers of the City of Ferguson at risk, which is a circumstance I cannot allow."

Wilson's lawyer, Neil Bruntrager, told The Associated Press that Wilson decided to step aside after police Chief Tom Jackson told him about the alleged threats Saturday.

Benjamin Crump, a lawyer for Brown's family, said the family is still considering civil litigation, "but don't let that get confused with the fact that they really wanted the killer of their child to be held accountable."

Wilson, 28, had been with the department for less than three years.

Brown was unarmed when he was killed by Wilson following a confrontation in a Ferguson street.

The shooting stirred racial tensions and led to numerous protests in Ferguson, a predominantly black community patrolled by a mostly white police force. A grand jury was assembled to investigate the shooting, and its nine white and three black members spent three months hearing more than 70 hours of testimony from 60 witnesses. Their decision not to indict Wilson was announced last Monday night, prompting violent protests and looting that resulted in at least a dozen commercial buildings being destroyed.