Netflix's revolution continues: Why “BoJack Horseman” is like nothing you've ever seen

"BoJack Horseman" starts out slow, but stick with it; it's one of the most genre-busting shows out there 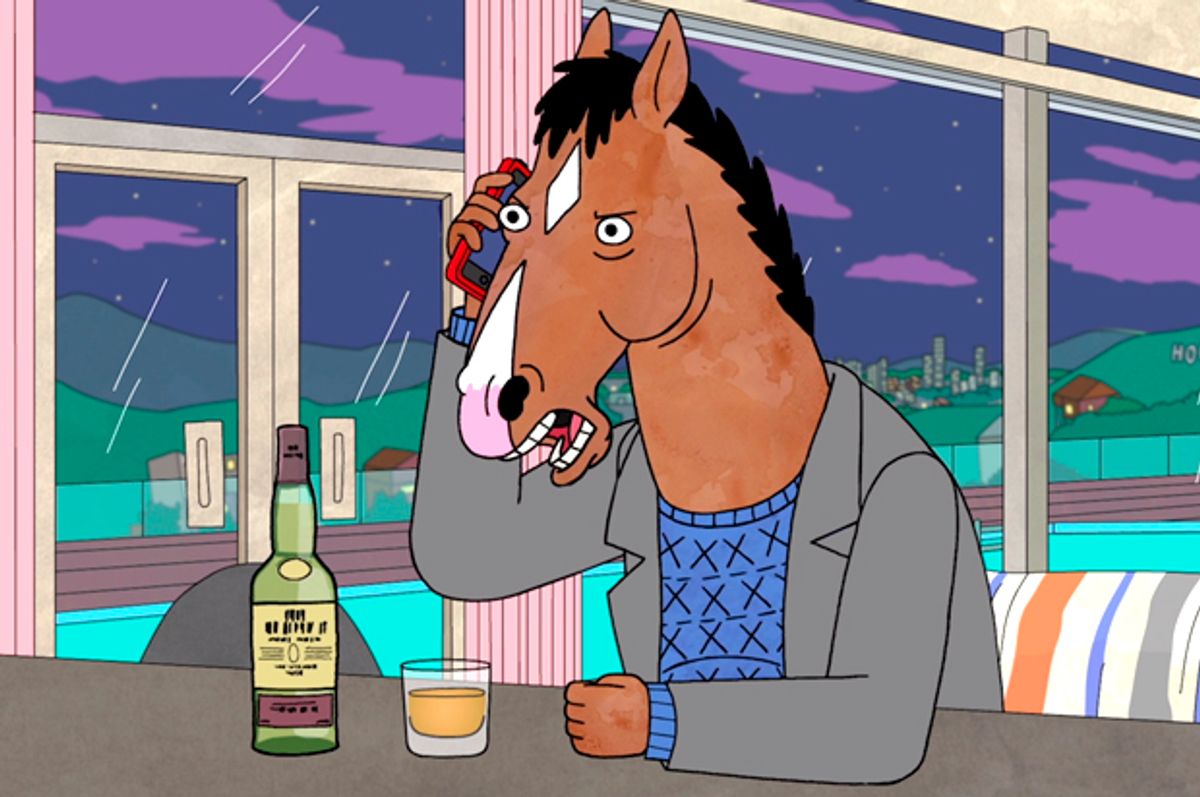 It’s hard to explain “BoJack Horseman.” It’s an animated show about a guy, who is also a horse, who is also a washed-up sitcom actor who makes poor personal and professional decisions. His ex-girlfriend and agent is a cat lady. Not a lady who has cats; a lady who is a cat. The editor who wants to publish his memoirs is a penguin. (Naturally, he works for Penguin.) In the title sequence, BoJack sleepwalks through various scenes of D-list celebrity with a dazed, absent look on his face; in one of the last moments, he sinks underwater without struggling, evoking “The Graduate’s" Benjamin Braddock on his horsey face.

“BoJack Horseman” is a show that tries for many things: raunchy comedy that engages with the disaffection of the bored and wealthy; the pathos of being old and forgotten in a culture that constantly rewards the new; and the bizarre, unremarked-upon reality of a Hollywood populated by animal-people and people-people. (Princess Carolyn, BoJack’s agent, energetically claws at a huge scratching post when she goes to the gym.)

It’s more weird than entertaining, at least at first. But sticking with the curiosity long enough reaps surprising rewards. BoJack’s story starts as an animated comedy about an asshole — in the vein of “Family Guy” — and turns into a time-jumping drama about an asshole in the process of painfully acknowledging that he is, well, an asshole — à la “Mad Men.” BoJack Horseman does the difficult work of transforming from something like Peter Griffin to something like Don Draper in 12 half-hour episodes.

It’s easy to write off the show in its first few episodes — I did, at first. The humor of the show doesn’t feel grounded in real relationships, and nearly everyone in the show is a terrible person. BoJack, himself, is a particularly hard man-horse to love. The star-studded guest cast seemed to detract from the characters they were playing (Keith Olbermann, Stanley Tucci and Kristen Schaal all drop by), and maybe this is trivial, but the world full of animal-people didn’t make, you know, a ton of sense.

And most crucially: “BoJack Horseman” is a strange creation, one that could not have existed just five years ago, one that feels avant-garde even now. This wanton combining of genres, borrowing of styles, and moneyed experimentation with expensive celebrity guests would be nearly impossible to sell to any major network except maybe HBO (which did something like this with “Curb Your Enthusiasm”). All the more surprising considering that “BoJack Horseman” is not a program from a veteran showrunner of a beloved sitcom, like Larry David, or a wealthy scion of a Hollywood family, like any number of the Coppola kids’ projects. The show is instead the brainchild of a novice showrunner, Raphael Bob-Waksberg, and the distinctive visual style of production designer Lisa Hanawalt, also a newcomer to television. The show is a pastiche of styles that borrows from the dark, surreal comedy of Adult Swim shows and the family drama of “Bob’s Burgers” and “The Simpsons,” but it also has the demonstrated freedom to use two back-to-back episodes to tell the same story from different perspectives, as it does with “Say Anything” and “The Telescope.” It isn’t afraid to end things on, as it describes, “A Downer Ending,” as it does in the penultimate episode of the season. And it’s willing to tell the convoluted story of BoJack stealing the “D” from the Hollywood sign and then pinning it on his rival Mr. Peanutbutter and then starring in the film adaptation of the real event, but not playing himself, playing Mr. Peanutbutter, all while Mr. Peanutbutter is preparing to marry Diane, BoJack’s ghostwriter, whom they both are in love with. (It is more than a little confusing, and revels in its silly complexity.)

Zach Sharf at Indiewire made the case that “BoJack Horseman” is the most Netflix-friendly of the studio’s current originals, arguing that like Season 4 of “Arrested Development,” “BoJack Horseman” “has made the streaming service’s binge-watching platform vital to experiencing the show as a whole.” What strikes me about “BoJack Horseman” is that it’s a show that demonstrates not just what Netflix can do well, comedically, but also how much the mold for animated shows can be further broken. “BoJack Horseman” is so much weirder than I thought a show could get while still being fun and moving; I wouldn’t have known that if Netflix hadn’t thrown money at this particular (and likely quite expensive) project.

After all, it’s crammed full of recognizable stars and guest stars, and name-drops everyone in Hollywood that it couldn’t get to be in the show (Quentin Tarantino, who is a tarantula; Beyoncé, voiced by Yvette Nicole Brown; and Cameron Crowe, who is not a crow, but a raven — “common mistake,” he assures us.) Series regulars Amy Sedaris and Paul F. Tompkins establish “BoJack Horseman’s" indie-comedy cred; Aaron Paul offers some mainstream television star power. The indie band Grouplove wrote an original theme song to play over the credits, and according to the show's credits, Netflix produced audio tracks for the show in multiple languages.

And then there are the show’s leads, Will Arnett and Alison Brie, who voice BoJack and his memoir ghostwriter, Diane Ngyuen, respectively. Both actors are slightly, slightly on the outs — just well-known enough to be pricey, but fringe enough to be looking for steady employ. Arnett’s had trouble finding success in live-action TV comedy, as “The Millers,” “Up All Night” and the much-mourned “Arrested Development” all only survived for a few short seasons. And while Brie is still a guest star on “Mad Men,” the sitcom where she’s played a series regular for many years, “Community,” seems to be perpetually undergoing some kind of major upheaval (the latest being that it is now part of Yahoo’s original programming). Both play a specific type very well: Arnett’s perpetually the lovable asshole, while Brie’s the smart, pretty girl with a tendency toward self-destruction. They reprise these types for “BoJack Horseman,” naturally.

In Arnett's performance particularly comes through the mingled self-delusion and self-awareness that go hand-in-hand with faded celebrity, as the back half of "Bojack Horseman" transforms, during episodes six and seven, from a show where a bunch of weird people have even stranger adventures to a show where a bunch of weird people try to process how much pain they're in. There's extraordinarily rich subtext to the last run of episodes: Margaret Lyons at Vulture argues that it's "the funniest show about depression ever." For me, it's a joyful oddity; for its creators, a dream come true. And for Arnett and Brie, it's paying work. Which is much nicer than what they might be doing if television wasn’t popping up on DVD-rental services and websites that started as search engines, a specter all too familiar to BoJack and his friends: nothing.