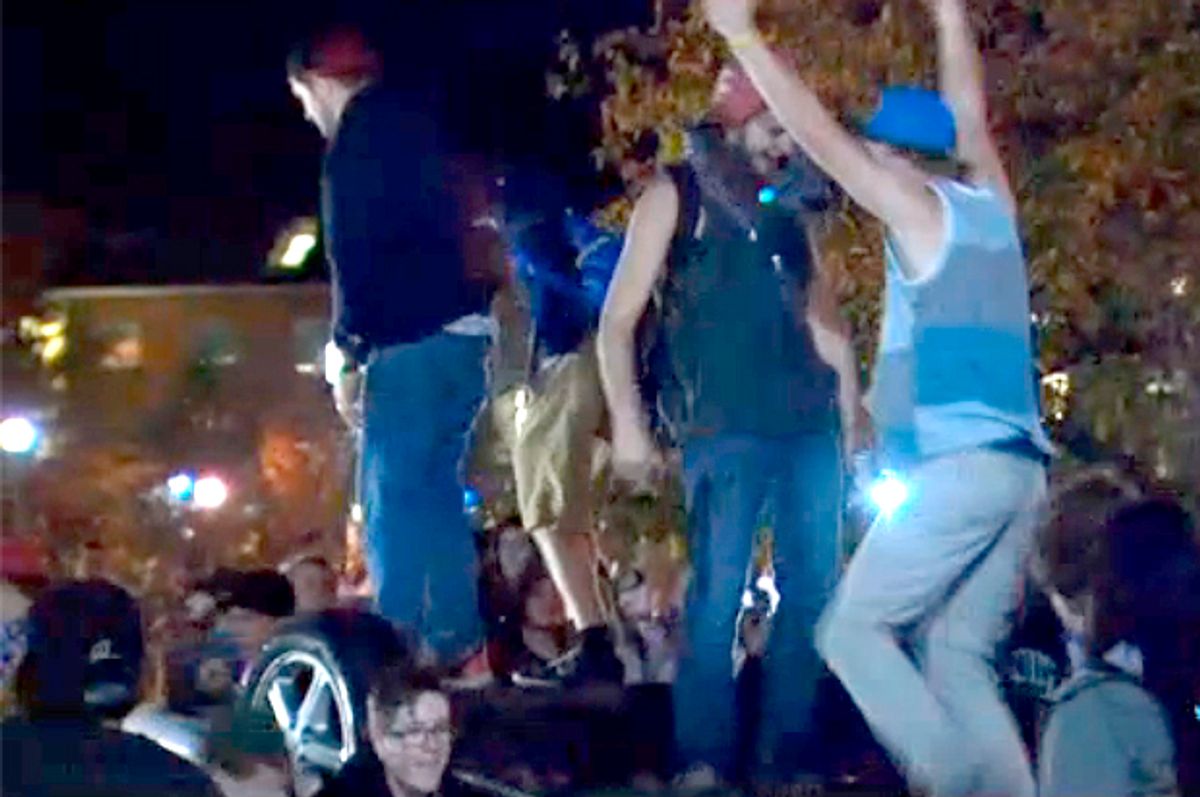 There is a long and storied history of behaviors being depicted through the prism of people's skin color. During Hurricane Katrina, as people of all races desperately searched for provisions, the media reported that white people “found” food, while black people “looted.”

A similar phenomenon can be seen in the response to protests sparked by the murder of unarmed black teenager Michael Brown and a grand jury’s recent decision not to indict his killer, Ferguson police officer Darren Wilson. In discussing riots that occurred in the aftermath of both events, the media and conservative pundits have displayed far too great a willingness to chalk up the destruction to black pathology without looking at longstanding policies that support and maintain white supremacy in the U.S. What’s more, they also completely overlook the fact that white people riot, too—just for really stupid reasons.

Inspired by a list compiled by political blogger @red3blog in a series of tweets, here’s a more in-depth look at the 11 most ridiculous reasons white people have rioted.

In response to their home team, the Denver Broncos, winning the Super Bowl for the second consecutive year in a row, 10,000 fans apparently decided the most appropriate response was to go on a rampage that included fighting in the street, randomly setting bonfires, overturning cars and general acts of vandalism. Andrew Hudson, a spokesman for the mayor’s office, later called the mob destruction “a really ugly scene by a lot of obnoxious people who were drunk.” Video of the swelling crowd behaving badly can be viewed here, with reporters repeatedly referring to the rioters, who caused the city millions of dollars in damages, as “rowdy.”

You might guess that with three World Series wins over the last five years, riot-ready San Francisco Giants fans might decide to sit one of those wins out, but so far, that hasn’t happened. While this particular photo dates to the 2012 riots following the Giants’ triumph over the Detroit Tigers, the city has erupted in post-World Series violence twice more in recent history: in 2010, after the Giants beat the Texas Rangers, and again this year, after the team defeated the Kansas City Royals. The 2014 riots ended with two non-fatal shootings and a stabbing among the violence that marred the night. A picture tweeted after this year’s mayhem shows the remnants of a smashed police car, with a note that “officers had bottles thrown at them by out of control fans.”

A few of the most interesting details about the riots that followed the Vancouver Canucks’ loss to the Boston Bruins for the Stanley Cup in 2011: Rioters chanted “Let’s go riot! Let's go!”; cars and trucks were overturned and set ablaze; theatergoers who’d gone to see the Broadway play "Wicked" found themselves stuck in the theater, which was located in the riot zone, until the whole mess ended. Jim Chu, chief of the Vancouver police department, blamed the chaos on "criminals and anarchists" disguised as hockey fans. In any case, local news cameras caught aerial views of rioters in the act, like this video of the crowd turning over a truck (at the :40 mark) for reasons apparent only to them.

If you have any doubt that white people are particularly committed to rioting for any sports related reasons, consider the case of the University of Kentucky in 2012. Riots broke out after the school defeated in-state rivals Louisville in the Final Four, with more than 30 arrests made and a staggering 50-some fires reported. Astonishingly, just two nights later, after the team defeated the University of Kansas to become NCAA champs, fans again rioted, setting just as many fires, but this time adding gun violence to boot, leaving one man non-fatally shot (and not by the police).

If you make a reference to “that time white people in Boston rioted over baseball,” you’ll have to get more specific and name a year, since it happened in 2004, 2007 and 2013. The deadliest riot, in 2004, left 21-year-old student Victoria Snelgrove dead, the accidental victim of a projectile fired by the police. Snelgrove, despite being among the 60,000-80,000 estimated rioters, was never labeled a “thug” or a “demon,” and the Boston police department issued a statement saying it accepted “full responsibility” for the student’s death. (The city was subsequently court-ordered to pay Snelgrove’s family $5.1 million.) Media coverage of the rioting accused fans of taking the celebration “too far,” and described them as “causing mischief,” even as images of flames engulfing a car flickered in the background. Riots also followed a 2007 Red Sox win, as well as another triumph in 2013, a night which ended with cars smashed and overturned.

Although the West Virginia University Mountaineers pulled an upset with their 2012 win over Baylor University, it did not reflect the 400-year-long struggle for equality and justice of one oppressed minority group against a racist and white supremacist power structure, but white people found a reason to riot anyway. According to ESPN, rioters “pushed over street lights and threw rocks, beer bottles and other items at public safety personnel and their vehicles,” and of course, set plenty of fires. In fact, the school has become famous for recklessly burning stuff after games (even though it's now a felonious offense), which I’d love to see any students from an historically black college try to get away with.

After it was widely discovered that Penn State football coach Joe Paterno hadn't reported his assistant coach, Jerry Sandusky, to police, after learning he was likely molesting young boys, the school fired the coach. After learning of the university's decision, thousands of students rioted, brawling with police and ripping down lamposts. They also overturned news vans, which crowded the campus as the scandal unfolded. Jerry Sandusky was later found guilty of 45 of the 48 charges related to molesting young boys, many of them from underserved communities and participants in the Second Mile, a "charitable organization" Sandusky himself founded.

4) Knoxville, Tennessee, 2010. Lane Kiffin Decides He Doesn't Want to Coach for the University of Tennessee Anymore.

Lane Kiffin probably expected that announcing he was quitting as head coach of the University of Tennessee Volunteers to instead coach the University of Southern California Trojans—after just one year on the job— would frustrate many of the school’s football fans. He may not have expected it would result in them calling for his head and totally wrecking shop. Reports state that Kiffin was basically chased from campus, while students and other football hooligans burned things, ran amok in the streets, and again, burned things (sometimes, apparently, while drunkenly singing “Rocky Top, Tennessee”). In the end, Kiffin turned out to be a huge bust at USC and was fired, meaning he'd actually done Tennesse a favor.

Every year, Huntington Beach hosts the U.S. Open of Surfing. Every few years, it also hosts a riot or two. The Huntington Beach Op Pro surf riots date back to 1986 when, according to (possibly apocryphal) lore, the chaos started with a few guys “trying to take off the bathing suits of two young women.” Whatever the origins of the craziness—footage of which you can check out here, along with photos here— it ended with hundreds of rioters setting police cars on fire, hurling bottles and throwing punches. The scene repeated itself in 2013, when a crowd described as “young, tan [and] overwhelmingly white” went on a similar free-for-all of random destruction. While these two riots are separated by a quarter century, don’t be misled: Huntington Beach has a history of random group violence that suggests something deeper and more pathological at work in the white community. Check out this video footage from 1993 (from a 4th of July riot) or this lengthy list of Huntington Beach crowd violence compiled by Southern California station NBC 4.

Chicago DJ Steve Dahl was a key voice in the “Disco Sucks” movement, the backlash against disco music that advocated for the superiority of the more white-identified genre of rock and roll. (The movement might also be considered the progenitor of rockism, which remains with us today.) Disco Demolition Night started as a publicity stunt where fans were invited to bring old disco records to a double header between the Chicago White Sox and the Detroit Tigers. Between games, the plan was to have Dahl explode a pile of the records on the field. The problem was, nearly double the capacity of Comiskey Park showed up, and a few thousand fans who'd been refused admittance instead found ways to sneak in. As the two teams began to square off, out-of-control fans threw disco records and random objects from the stands onto the field. Between games, when the explosion finally did happen, thousands of attendees stormed the field, setting bonfires, stealing bases and tearing up the green. It took cops in riot gear to get everyone back to their seats, and ultimately, the second game was cancelled and the White Sox forfeited. As pictures from the night attest, the crowd was overwhelmingly white, although there was one person of color in attendance: late actor Michael Clark Duncan, a 21-year-old unknown at the time, who “slid into third base, had a silver belt buckle stolen, and went home with a bat from the dugout.”

The much-mocked Keene State College riots this year are not just evidence that white people can and will riot without the slightest provocation, they are a troubling look at the very different ways our society views behaviors based on skin color. In October, Keene State held its annual Pumpkin Festival, a seemingly innocuous annual gathering that somehow devolved into drunken (white) students turning over cars, throwing bottles at the cops, stealing street signs, starting fires, shouting obscenities at the police, and somehow, surviving without a single person being so much as tased. Ironically, despite early unrest, peaceful protests in Ferguson had been ongoing for weeks, but conservative media, for some reason, labeled those activists criminals. Twitter couldn’t help noticing the difference, resulting in tweets that wondered "Why are they tearing up their own community?" and suggesting “White people in New Hampshire really need to do some self-reflection and regulate their animal impulses in the wake of #keenepumpkinfest.”