A nation crippled by fear: Why America's reaction to Ferguson, Tamir Rice and ISIS are all connected 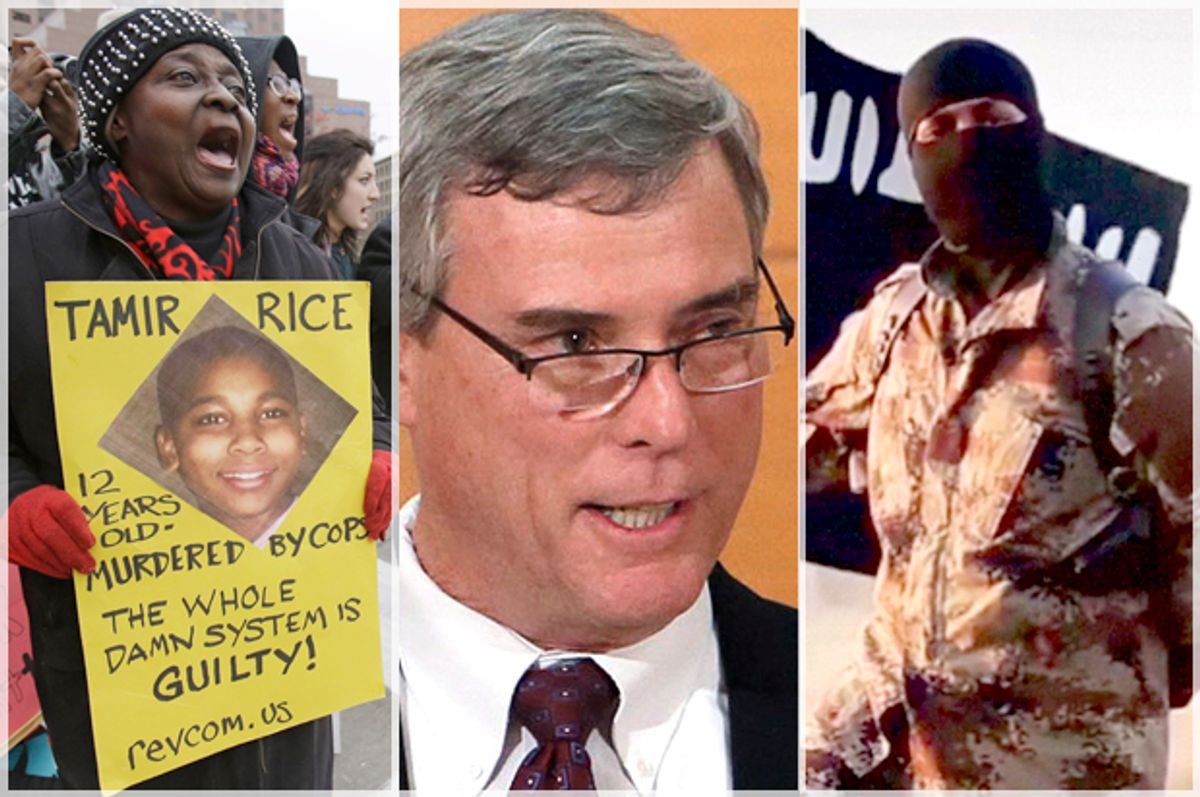 "[T]here’s never an excuse for violence," President Obama said after a grand jury in Missouri decided not to charge Darren Wilson in the shooting death of Mike Brown. And yet, earlier that same day, Obama had fired Defense Secretary Chuck Hagel, just one move in a series that will recommit the country to an increasingly violent approach to the Middle East.

Obama nominated Hagel in 2013 to preside over the end of two wars. "He came to the office with the assignment of presiding over the ending of two wars," Elizabeth Drew described in a review of his firing. Frankly, at that point, the Iraq War was already deemed ended; Obama planned to similarly end the Afghan war by following the same approach: withdrawing forces and forcing Afghanistan to take charge. In August 2013, Hagel also presided over a war Obama declined to start, against Syria's Bashar al-Assad.

But the long-developing success of the Islamic State (ISIL) -- and more specifically, the gruesome videos of masked terrorists beheading Americans posted to YouTube and played over and over on cable news -- reversed Obama's move toward peace, not just in Iraq, but (perhaps to stave off a similar force arising in a power vacuum) in Afghanistan.

Few believe the current approach to combating ISIL will work any better than the earlier two counterinsurgencies in the Middle East, and Hagel got stuck in the middle. (One precipitating reason for Hagel's firing, several reports have said, is that he demanded the administration better account for Assad in its plans to beat ISIL.)

Then, in the days before Hagel's firing, the New York Times reported both an expansion of the activities permitted by American troops remaining in Afghanistan as well as a resumption of night raids, violent intrusions into private homes in search of suspects. Yesterday, the Times even reported on a U.S. Special Forces raid in Yemen, reportedly to free a number of hostages. It would mark a rare use of American forces on the ground in yet another country.

America is back in the counterinsurgency business across the Middle East.

Even Obama's laudable, marathon efforts to achieve a nuclear deal with Iran -- a deal that would dramatically reshape and possibly vastly improve our response to ISIL in the Middle East -- got pushed back months, subjecting the prospects of a deal to the increased power, next Congress, of members of Congress who would like to sabotage the deal.

What was so striking about Obama insisting that there's never an excuse for violence was not just the contrast with his resumption of his predecessor's violence in the Middle East, a resumption of policies that have resoundingly failed.

It's that the president decried violence even as various parts of government rolled out what looked like a counterinsurgency strategy in Ferguson. The Saint Louis area and, in the following days, groups around the country rebelled -- most people, peacefully -- against the serial, banal violence of cops directed against African-American sons. In Ferguson especially, the fears sown in the weeks before the verdict provided the excuse to roll out state instruments of violence that may well have exacerbated the violence after the verdict -- and certainly didn't contain it. Sure, technically the government is supposed to have a monopoly on violence -- which is why Darren Wilson got away with shooting an unarmed black teenager without being charged. But of late, the legitimacy of the state's violence has become increasingly fragile. The state's excuses for violence, both overseas and in localities across America, are increasingly dubious. The legitimacy of their excuses was further undermined last week when it became clear Cleveland cops shot a 12-year-old boy, Tamir Rice, wielding a toy gun.

In his speech after the Darren Wilson news, Obama might better have spoken about fear, not violence.

Because fear incited by provocative videos posted online likely explains why Americans ignored the resurgence of violence in Iraq until a few Americans were killed (and ignore the frequent beheadings carried out by our allies the Saudis).  “As long as ISIS is beheading Americans there’s no way the president can stand up and say that Syria isn’t our problem,” Drew reported a source asserting.

And whatever else you think of Darren Wilson's testimony -- which conflicted in some ways with what he reportedly said immediately after the shooting -- he used the language of fear and dehumanization to justify the killing. The big black teenager he shot, Mike Brown, was like "Hulk Hogan," Wilson said. "It looks like a demon," Wilson described Brown's face. Brown "made like a grunting" before Wilson fired the fatal shots. "[T]he only other option I thought I had was my gun," Wilson explained to the grand jury to explain why he started shooting Brown. As for 12-year-old Rice, he and his toy gun elicited a response from a caller for this reason: He was "scaring the s___ out of people."