Matt Lauer's big get: "Today" host works to revamp Ray Rice's image -- and his own

Among the many Lauers on display in this interview: Skeptical Lauer, Stern Lauer and Inappropriately Funny Lauer 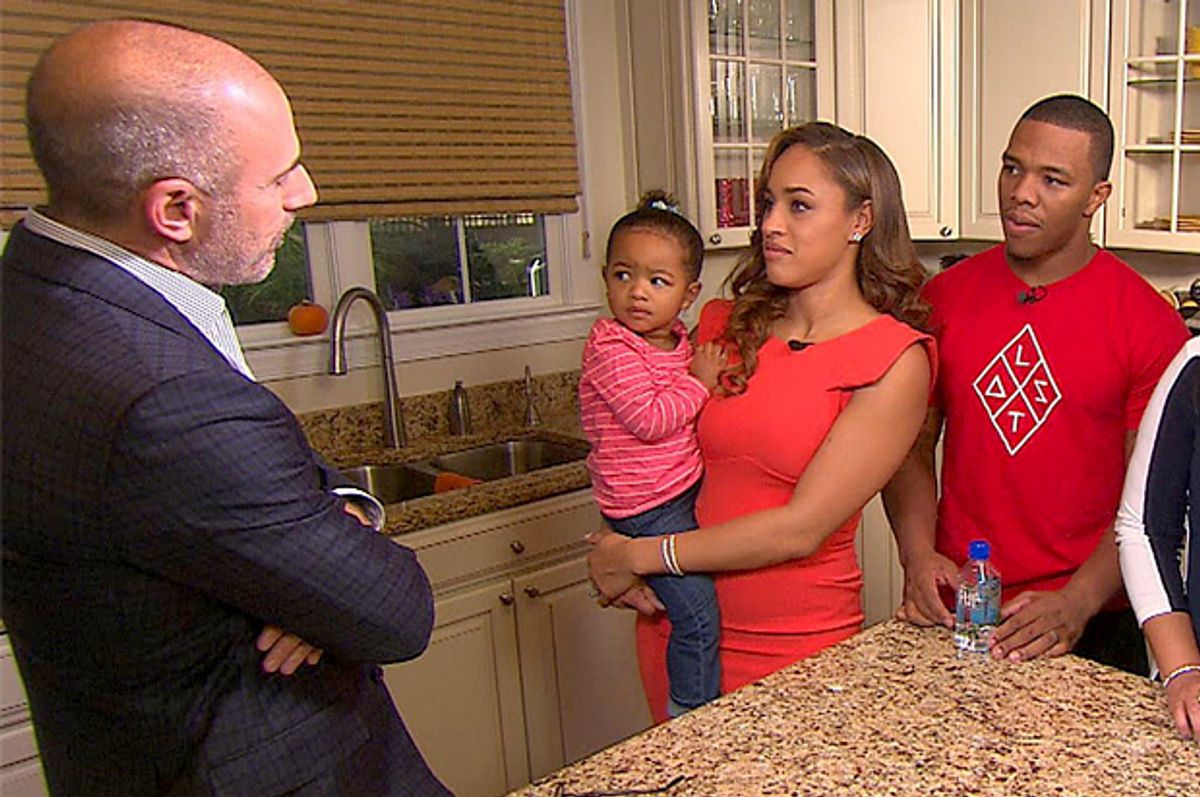 Yesterday and today, Matt Lauer sat down for an exclusive two-part “Today” show interview with Janay Rice and her husband, former Baltimore Raven Ray Rice, about his future in the NFL and the “infamous incident in an elevator,” as Lauer dubbed it, when Rice knocked his then-fiancée unconscious in an Atlantic City casino. Suspended indefinitely by the Ravens in the wake of the scandal, the Rices have become the face of the NFL’s domestic violence problem, but now that the league has reinstated Ray, the opportunity for a “Today” interview with Lauer is a chance to brighten his tarnished public image as he searches for a new team.

Lauer has a bit of an image problem himself. A lot of people still think he’s the jerk who pushed Ann Curry out of “Today.” His show is no longer on top of the morning ratings heap, trailing ABC’s “Good Morning America,” and many blame him. A blockbuster interview couldn't hurt. But navigating the particularly tough football wife/domestic violence combination of human interest and serious interview is a tough line for anyone to walk.

Lauer first sat down with Janay and her mother, Candy Palmer, and then later with her father, Joe. Lauer seemed comfortable in the living room of the Rice’s Maryland home, sitting across from Rice and the Palmers, who sat on the couch. Lauer led Janay through the events of the last year, including the press conference where Janay, not Ray, apologized for the elevator assault, hitting the appropriate tones of gentle sympathy without injecting blame or pity. His questions to her parents are gentle, but specific enough: Did you ever expect this to happen? How has this affected your family?

When Ray Rice comes home and decides, seemingly on the fly, to join them, the "Today" team moves the interview into the Rice’s kitchen. It’s awkward, it’s claustrophobic and it only kind of works. The setup manages to look both informal and uncomfortable. And Lauer’s tone changes, too, as he addresses Ray. Sympathetic Lauer isn’t fully gone, but he’s replaced at a rapid pace with several other Lauers, each less pleasant than the last, pushing for Rice to break his calm.

Skeptical Lauer crosses his arms in front of his body in a defensive stance, noticeably when Ray Rice says, “I take full responsibility for my actions —” and Lauer cuts him off. Then there’s stern Lauer chastising Ray on their press conference appearance: “We also heard her apologize and at that press conference we didn't hear you apologize to her. And that upset a lot of people. Do you understand that?”

When Ray mentioned his daughter Googling him in the future and “who knows what’s going to come up?” inappropriately funny Lauer quips, “not highlights from the field.” And at times, Lauer’s tone even turns condescending toward Ray. “Counseling makes no sense unless you learn something about yourself. What have you learned about yourself over these last several months?” Was that really necessary? Then he interrupts Ray’s answer: “Did you resist it?”

In a time when "Today" show ratings could use it, Lauer scored a win by securing these highly anticipated and sought-after interviews. Nobody can blame him for pushing for Ray to join in after the tightly controlled family portion of the interview was finished, even if, for whatever reason, a kitchen island was deemed the most appropriate venue. Lauer's performance in the kitchen might not be charming enough to win some of those old "Today" fans back, but you could argue that his slightly antagonistic approach spoke to viewers who feel Rice is getting off easy for assaulting his wife. Ultimately, though, Ray Rice kept his composure and stuck to his contrite-yet-measured script. It wasn't the weepy confession that "Today" could have used, but at least you can't say Lauer didn't try.