"Not all of us are A-plus students all the time": Life lessons from "Master Chef Junior," TV's most inspiring show 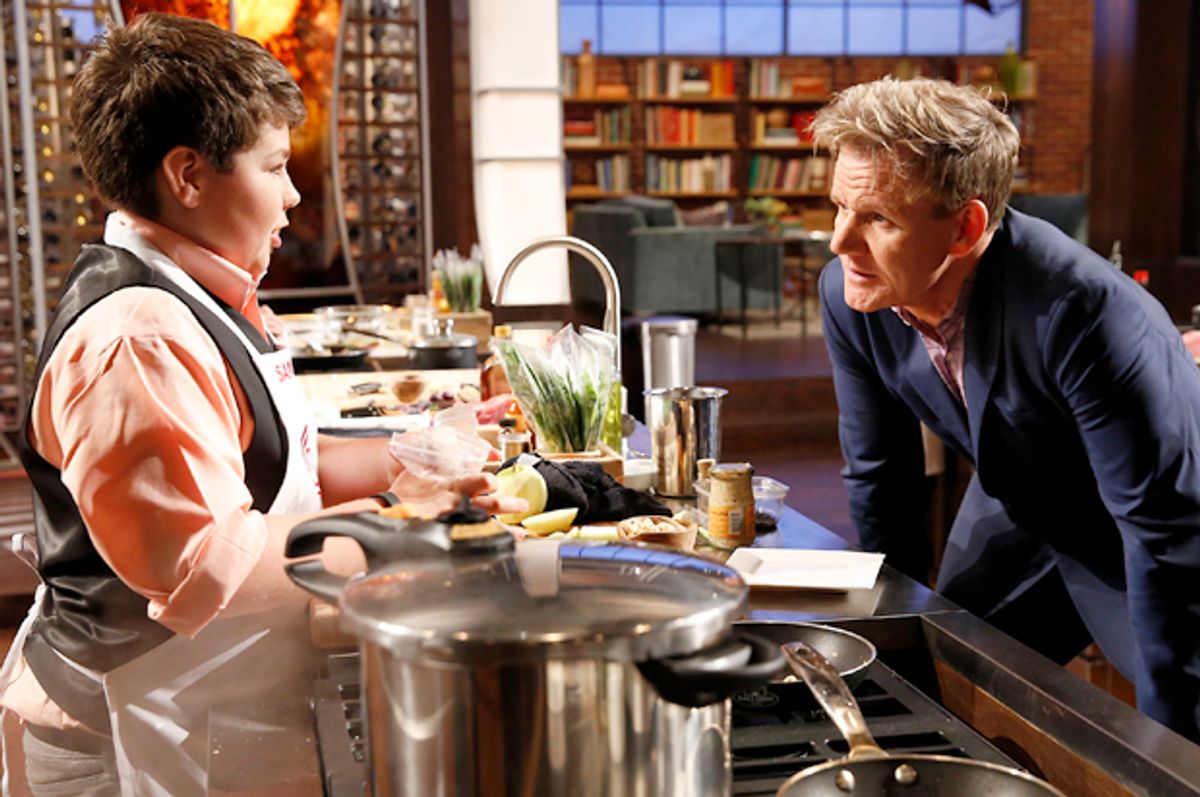 Reality shows tend to hold up a less-than-flattering mirror to human nature. By thrusting people into extreme, high-pressure situations and dangling a prize in front of them, whether it be eating scorpions for money or vying for the romantic attention of someone who may or may not be Prince Harry (we’re trying to block that one from memory), these shows generally showcase our baser human instincts. Suffice to say it’s rare that an episode of "Survivor" or "Dance Moms" leaves one optimistic about the state of civilization.

So when it comes to reality TV, Fox’s "Master Chef Junior" is a breath of fresh air. The cooking competition show for 8-12-year-olds, judged by Gordon Ramsay, Joe Bastianich and Graham Elliott and now in its second season, is far and away one of the most delightful and life-affirming things on TV. Not only have I learned how to properly cook a Beef Wellington, I also turn off the TV each Tuesday night feeling renewed and uplifted. Here are some of the show’s most profound life lessons:

Age is just a number:
One of the major lessons of “Master Chef Junior," in which these pint-size prodigies conjure up complex feasts that would put most adult home cooks to shame, is that children are capable. Like, really capable. And while the older kids have a clear advantage over the younger ones — to be fair, the 12-year-olds have been alive one-and-a-half times as long as the 8-year-olds — the pluck and culinary mettle of the likes of Abby, Oona and Sarah show that you don’t have to be able to lift your mystery box in order to make magic with its contents.

Fussy eating is a state of mind:
OK, if a bunch of 9-year-olds can successfully cook with a box of “non-kid friendly foods” like liver, kidneys, snails, brussels sprouts, dates and fennel, I’m pretty sure this proves that the rest of us have no excuse for our limited culinary horizons. Perhaps fussy eaters just need to spend a little more time eating with the likes of 9-year-old chicken paté queen Oona (whose palate is, as she puts it, "pretty awesome”).

Teamwork is essential:
On last night’s episode, Logan catastrophically over-seasoned his ceviche, after which Gordon Ramsay took him aside and asked, "Why didn't you come to me, 'Chef taste that for me, Chef what do you think?' If you come to me, we'll be twice as strong." From the cupcake challenge to the relay race to kitchen takeovers, we’ve seen time and time again that working together is the key to success — especially when you’re too small to reach the mixer by yourself.

There are two sides to every human:
Gordon Ramsay is best known for his prolific history of public douchery, not to mention berating his adult contestants and screaming insults and curse words at them until they break down. Yet while Ramsay is usually the stuff of (kitchen) nightmares, his softer side is on display here, helping the kids and giving them hugs and positive reinforcement. As he says to Coco when she cries over her over-salted potatoes: “I’m not leaving until you laugh.” And while nothing has ever looked more unnatural than Joe Bastianich holding a child, it’s fun to see people subverting their own public image.

It’s good to be silly:
"Master Chef Junior" is one of the few reality shows that will donate a good 50 percent of the episode to a challenge whose sole outcome is a bowl of whipped cream or maple syrup being dumped atop the judges’ heads. It’s a constant reminder that cooking should be fun, that the show’s contestants are still just kids, despite their talent, and that it’s important to let loose every once in a while, even for the crotchety likes of Gordon Ramsay.

Cooking eggs is really hard:
From Season 1's soft-boiled egg challenge to Season 2's egg-flipping challenge, perhaps the biggest "Master Chef Junior" takeaway is that nothing is harder than making the perfect egg. Nothing.

Imagination is precious:
I would far and away rather eat at Abby's “Horses and Courses” or Logan's under-the-sea restaurant than most of the cookie-cutter establishments cropping up in New York every day. Watching these kids come up with these brilliantly inventive dishes, while preserving their childlike enthusiasm -- shout-out to Abby’s jellybean pie, because, as she put it, "everybody loves jellybeans" -- is a glowing testament to the power of creativity and imagination.

Keep it simple:
In Season 1, Alexander is constantly being called out for his tendency to overcomplicate things. While he ultimately strode to victory, the show has demonstrated the importance of simplicity time and time again, such as in Season 2’s post-egg challenge in which Abby stole the show with her two-ingredient salmon and asparagus meal, proving that one piece of perfectly cooked salmon is better than 10 ingredients cobbled together poorly.

Don’t be afraid to take risks:
At the same time, it’s important to push yourself. In last season’s chicken challenge, each of the four finalists was given a piece of the bird, ranging from the easy (chicken breast) to the very hard (chicken liver). Ultimately, Alexander's tricky liver dish ruled victorious. Then there was Oona’s chicken liver paté with bruleed pears on a garlic crostini — a lot of the show’s high watermarks tend to involve chicken liver — and Sarah’s deep-fried sardines, which prove that sometimes it really is better to take the road less filleted.

Everyone has an off day:
As Abby says encouragingly when Isabella serves Gordon Ramsay a raw chicken parmesan,  “Not all of us are A+ students all the time!” Hey, even the great Alexander faltered when it came to making a layer cake.

The joy of doing is more important than winning:
Unlike most reality shows, in which everyone constantly has their eye on the prize, the "Master Chef Junior" competitors really seem like they’re there for the love of cooking and the joy of learning, forging real friendships that aren’t premised on backstabbing and trying to take each other down. When Gordon Ramsay asked Logan last night why he came on the show, he didn’t say he came to win, he said, while fighting through (adorable) tears, that "he came to get better." What a guy.

Pastries are harder than mains:
Anybody who has ever seen a cooking competition show knows this to be true, but watching these kids struggle over layer cakes and cream pies really hits the point home. Baking is the worst. The. Worst.

Keep a good attitude:
OK, so the producers probably made an effort to pick extra mature kids, but the way these kids handle the intense pressure of the competition, being chastised by Gordon Ramsay and then being eliminated on national television, is a feat of composure and showing grace under fire. Sure, there are tears during elimination, but minutes later they’re chipperly talking about how excited they are to wear their aprons at home and how proud they are for getting so far. As one contestant put it, “I am sad I have to leave but I’m excited to go home and see my dad and my dog.” If only we could all accept defeat with such grace and poise.

People are … good at heart?:
I don’t know if it’s that children start out good and turn evil once they get to competing-on-“The-Apprentice” age, but far and away the most moving thing about "Master Chef Junior" is how the young cooks support each other: sharing ingredients, encouraging and cheering each other when they falter, and crying when their friends get sent home. It’s so nice to see people -- even little people -- performing a craft at a high level and not turning into pompous dicks in the process.