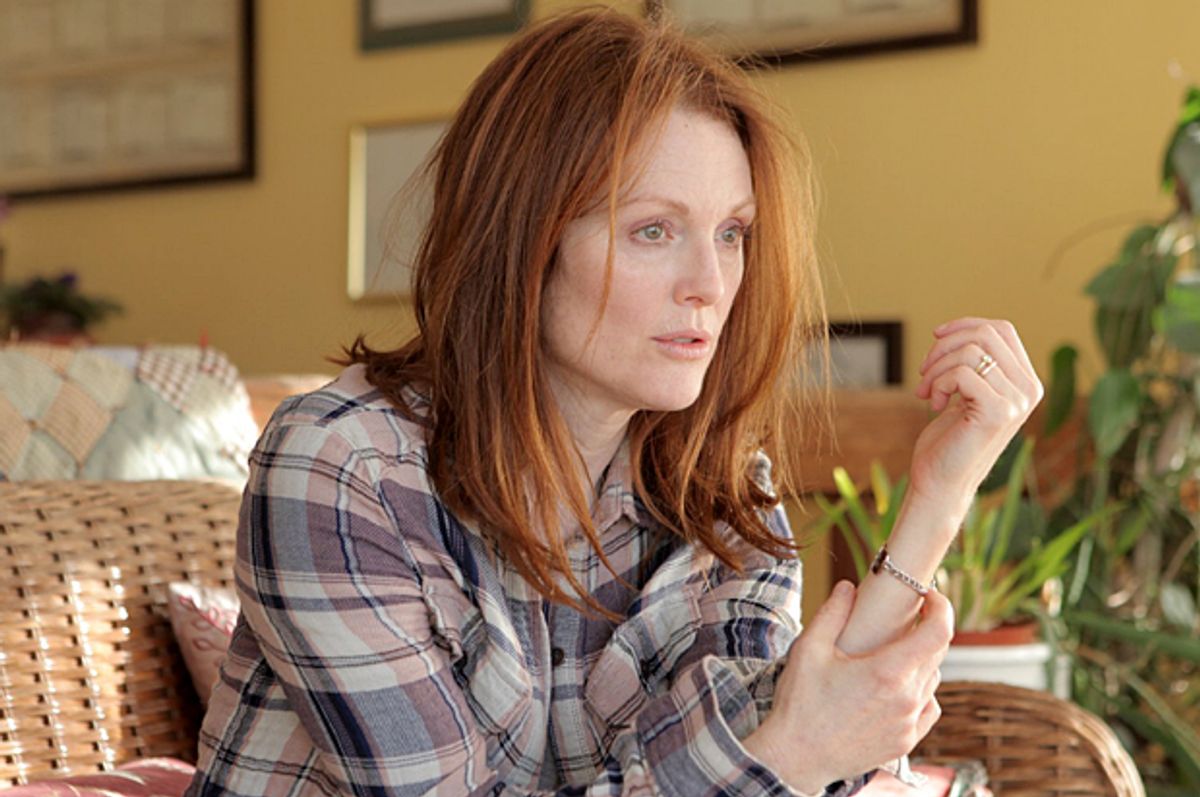 I’m not a big fan of the film-critic dodge where you say that some actor delivers a tremendous performance in a bad or mediocre movie. If the person’s acting is so great, why isn’t the movie better? Since we do not (yet) possess the technology that can extract actors from their context -- and since a movie is a complicated collaborative and holistic enterprise, not a neutral stage for thespians – then what the hell are you trying to say? Is the damn thing worth seeing or not? And now here I am, face to face with “Still Alice,” also known as the WASP Family Christmas Early-Onset Alzheimer’s Special, dealing with that precise contradiction.

In fairness, “Still Alice” is not exactly a terrible film, or at least it doesn't seem like one until you step away and start to think about it. It’s a crisp and streamlined melodrama from the writing-directing duo of Richard Glatzer and Wash Westmoreland (of “Quinceañera” and “The Last of Robin Hood”), who turn a tear-jerking commercial novel by Lisa Genova into a showcase for the luminous Julianne Moore, likely Oscar-bound for her mesmerizing portrayal of a brilliant academic descending into dementia. Moore plays Alice Howland, a composed and successful Columbia linguistics professor who begins to forget things right around her 50th birthday. At first it’s just the occasional word she can’t get hold of – a linguist forgetting the word “lexicon,” ha ha. (The next one she can’t remember is “pariah.”) But then she introduces herself to her adult son’s girlfriend (whom she’s already met) and gets lost running on the Columbia campus, where she’s worked for years.

This is meant to be dramatic irony at work, I suppose: Alice is intelligent, beautiful, accomplished and rich, but that cannot protect her from freakishly bad medical news. She has a happy marriage with a workaholic medical researcher played by Alec Baldwin (the default setting for all self-absorbed husband roles). She has three adult children, two of them thriving. (Her unsuccessful actress daughter is played by Kristen Stewart, another ha ha, who is actually very good.) Alice has only a minor and highly normative amount of family discord, she could pass for 10 years younger than her chronological age, and she lives inside an Upper West Side bubble of white-people privilege and decency. Her kitchen is flooded with light, every meal includes fresh vegetables and good wine, there are never dirty dishes in the bedroom or dirty laundry on the floor. She has a standing order at Pinkberry: the “natural” yogurt, with blueberries and shredded coconut. In other words, this person would be supremely annoying were she a real person and not Julianne Moore; we are almost tempted to root for her downfall (and then to feel bad about it).

Alice has also been covering for her mental deterioration for a long time, most likely. As her movie-neurologist explains, high-functioning and highly educated people develop all kinds of coping strategies: She relies on smartphone scheduling a little more literally than the rest of us, she Googles family recipes she can no longer remember and she leaves herself a trail of virtual breadcrumbs, from labeled folders on her computer desktop to Post-it notes on the kitchen counter. Forgetting the word “lexicon” is just the sign that the façade is breaking down. Viewed in the abstract, “Still Alice” is an utterly conventional movie-of-the-week, whose every step is familiar. But there’s nothing formulaic or rehearsed about Moore’s performance; her moments of midnight terror, fierce resolution, painful struggle and worsening confusion burn with passionate intensity. There’s a devastating scene late in the film that I won’t give away, when Alice tries to follow the step-by-step instructions she left for herself in a video a few months earlier, about exactly what to do when she can no longer answer basic factual questions about her own life.

Moore is on-screen in every scene and almost every frame, as we follow Alice from the early days of her shocking diagnosis, when she tries to push forward with a semblance of normal life, to later episodes when she cannot reliably recognize her own children, or locate the bathroom in her family’s beach house. (You have to have a beach house in the first place, let us note, before you can get lost in it.) She is nicely balanced by Baldwin and Stewart, who serve as a Kübler-Ross Greek chorus, first seeking to deny the obvious transformation in Alice, then trying to bargain with it and contain it. I suppose the question for all viewers will be whether the excellence of the acting and the cleanliness of the filmmaking make up for the fact that “Still Alice” is basically a Lifetime production injected with a little indie DNA.

Don’t talk to me about realism or relevance when it comes to “Still Alice,” by the way. Yes, millions of American families deal with Alzheimer’s, and with our rapidly aging population that’s only going to become more common. But Alice’s diagnosis is truly exotic: Early-onset Alzheimer’s in one’s 50s is exceptionally rare, and her variety is rarer still, a genetic form that was inherited and can be transmitted. In other words, each of her kids has a 50 percent chance of carrying her flawed genetic code – and if they do, they are virtually certain to develop early Alzheimer’s symptoms themselves. Yes, it could happen and it has happened, but that’s not the point. Cannibalism and crocodile attacks happen too, but we’d have no difficulty identifying them as outlandish devices in drama.

Moore gives a gorgeous and compassionate performance, and if she brings home the hardware in awards season she deserves it. (Yeah, I cried, and if you’ve known or loved anyone with this disease you probably will too.) But consider the grim and hilarious reality that a 54-year-old actress at her level of talent and radiance has to play a woman with Alzheimer’s to become a major player in the Oscar race. That reveals way too much about the movie industry and its priorities. Aided by witty and understated work from Baldwin and Stewart and the capable direction of Glatzer and Westmoreland, Moore does her utmost to pull “Still Alice” toward the realm of meaningful social drama. Let’s put it this way: It’s a way better movie than it ought to be, but not good enough to escape its pulpy, mendacious roots.

"Still Alice" opens this week for an Oscar-qualifying one-week run in New York and Los Angeles, with national release to follow in January.