Thomas Jefferson vs. the Bible: What America's founding father really thought about religion

Our third president had famously complicated attitudes about Christianity. But just how conflicted was his? 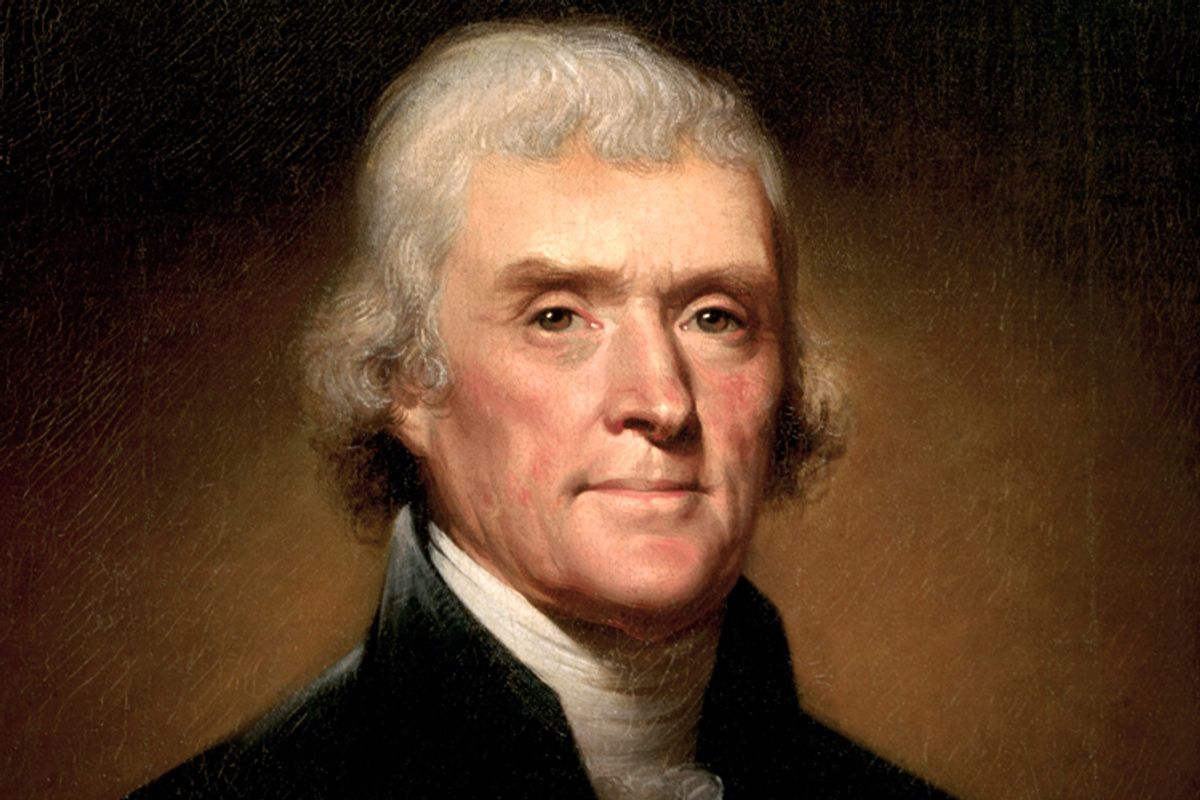 American Founding Father Thomas Jefferson, who authored the Declaration of Independence and served as the third president of the United States, also  took a pair of scissors to the Bible, publishing a thin volume of the parts he thought worth keeping. The  original Jefferson Bible exists to this day, and is  available online. But did Jefferson actually call the Good Book a  dung hill, like some say?

The answer to that question is kind of yes, kind of no.

Yes, Jefferson thought that most of the Bible was, in modern vernacular, a load of crap, and yes, he did, by way of analogy, use the term “dunghill.” No question: If Barack Obama repeated Jefferson’s words, conservative Republicans would leap to their feet and the dunghill would hit the fan.

But this is now and that was then, so stick with me for the other half of the answer, which requires some context and the words of Jefferson himself.

By comparison with some of Thomas Paine’s comments about the Bible, Jefferson’s critique was parlor talk. Jefferson saw himself as part of a dignified and righteous endeavor—a cadre of scholarly men working to remove the layers of mythology and superstition that congealed during the first and second centuries of Christianity. The analogy he used was separating dung from diamonds, and the words he kept—the diamonds--were the ones he thought to be authentic teachings of Jesus.

Jefferson’s quest to extract the man from the myth—the  quest for the historical Jesus—is one that continues today.

Christians have never agreed on who or what Jesus was, which is one reason Christianity fragmented into  over 30,000 denominations and non-denominations. In the beginning, Jesus worship featured small conflicting and splintering sects that scholar Bart Ehrman calls  Lost Christianities. In the last 200 years, quarrelling theologians have been joined by legions of secular scholars—linguists, cultural anthropologists, antiquarians, hobbyist historians, creative writing professors, and even mental health professionals—each touting a version of the man behind the myth or  questioning whether there actually was one.

Ironically, some of the first recorded attempts to differentiate Jesus-fiction from Jesus-fact were the Church councils that produced our modern Bible by declaring some early Christian writings to be divine in origin and others heretical. These councils lacked the tools of modern analysis, and their approach would be considered crude and naïve by today’s standards. Also most participants went into their committee meetings with a bias: that the kind of Jesus worship that had emerged in the center of political power—Rome—was the right kind. Committee members declared a “book” of writings in or out depending on whether the author claimed a close relationship with Jesus and whether the book aligned with the Roman variant of Christianity.

Convinced that they had separated divine revelation from dross, Church authorities sealed the “canon” or contents of the Bible, and as the Roman Church expanded with the Roman Empire, heretical texts and believers were burned. One  20-year Christian crusade targeted a sect of Christians, Albigenses, who were deemed heretics.

By Jefferson’s day, the Enlightenment prevailed. The Protestant Reformation, two centuries earlier, had left the Bible itself largely intact (after excising the books that Protestants call Apocrypha) and, in fact, had vastly elevated its authority. But the American founding fathers and many intellectuals of their time no longer saw the gospels as gospel truth. Many were deists, who believed that spiritual truths are better found in the study of nature and the application of reason than in sacred texts. Jefferson, a man of his time, was no fan of Christian theologies or theologians, as excerpts from some of his letters make clear:

However, despite his deep distaste for organized religion and nonsense, Jefferson never questioned whether Jesus himself was a real historical character or an inspiring role model. In fact, it was these two assumptions that led to his comment about dung in letters to James Madison and W. Short:

To Jefferson’s mind, Jesus was a wise and beneficent moral teacher. The dross was the fabric of mythic stories that made him into a magical being, stories like the virgin birth, miracle healings, and the resurrection. He  also loathed what he saw as superstition buried in Christian teachings about sin and salvation—the idea that we all are born into sin because of Adam and Eve, for example, or that a special few, the “elect” are chosen for an eternity in Heaven.

For Jefferson, as for hundreds of millions of people through history, the figure of Jesus became an inkblot test, a character drawn with enough ambiguity that he could project his own sense of what was right and good. Modern he-men have depicted Jesus as a  body builder—a model for muscular Christianity. One well-heeled Evangelical preacher called him a guy you’d like to play golf with. Liberals talk about him as a friend to the poor. Conservatives as a righteous judge. As an educated man of the Enlightenment and a rebel against the British crown, Jefferson saw Jesus as a benevolent man of reason, killed ultimately not for our sins but for sedition. His Jesus was a mirror of his own aspirations—the values he sought in himself and the country he helped to found. The diamonds.