"It makes me really depressed": From UVA to Cosby, the rape denial playbook that won't go away 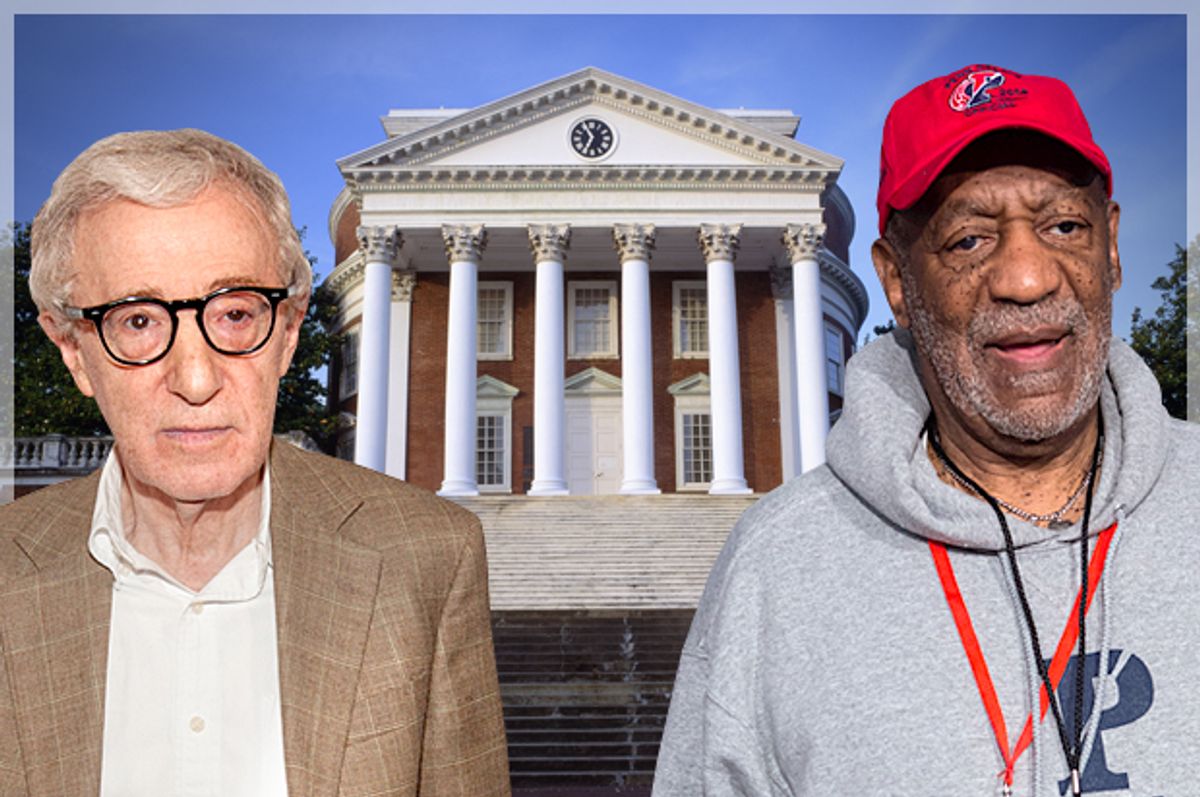 Rolling Stone contributing editor Sabrina Rubin Erdely’s report on a culture of sexual violence at the University of Virginia has presented us, once again, with an opportunity to talk seriously about rape, institutional and systemic failures of accountability, male sexual entitlement and a culture that protects and enables predators. But instead, to borrow from Kat Stoeffel, we’re talking about ethics in gang rape journalism. This isn't an accident.

Doubts about the veracity of the piece began in earnest after Richard Bradley wrote a blog post about why he thought the gang rape described in the piece was too horrific to be believed and why Erdely's failure to seek comment from the unnamed alleged rapists disqualified it as credible journalism, so let's start there:

Nothing in this story is impossible; it’s important to note that. It could have happened. But to believe it beyond a doubt, without a question mark -- as virtually all the people who’ve read the article seem to -- requires a lot of leaps of faith. It requires you to indulge your pre-existing biases.

Or perhaps I should say your pre-existing fantasies -- your nightmares about the worst possible thing that could happen to you, or your friend or your daughter or sister; your deepest fears about what men are capable of; your horror at the horror of rape; your outrage about the lack of outrage.

Now on to the matter of where I stand. I think Erdely is a strong reporter who could have been more transparent about her process in the narrative, and feel that some of the criticism about the presentation of Jackie’s account of being gang raped by several members of Phi Kappa Psi could have been avoided by adding a few lines to make the nature of the account -- first person, reported from the victim’s recollections and without comment from the unnamed alleged perpetrators -- more explicit.

And while Erdely's failure to reach out to the alleged perpetrators for comment might constitute a break with standard procedure, I also think that Columbia University journalism professor Helen Benedict raised a persuasive and important point when she defended the piece in the New York Times. “If a reporter were doing a story about a university accused of failing to address the mugging or robbery of a student, that reporter would not be expected to interview the alleged mugger or robber," she said. "The piece might have been stronger with more than one source, but exposés of wrongdoing often start with one whistleblower.”

Perhaps with some additional reporting or an aside about what agreements were made while working on the piece the idea that the story is a "hoax" would have died in the right-wing echo chamber where it had already been bouncing around for a week.

But -- and this is key -- it would have been impossible for Rolling Stone and Erdely to have emerged from this story without having their process and motives questioned. Because so many of these protests about ethics and transparency are just the latest cover for the same tired bullshit: derailing public conversations about rape so that we will talk about virtually anything else.

And I resent being expected to treat every person who says hey no fair when a survivor speaks or a damning report is published as if these are all serious and credible concerns that elevate the discourse and bring us somewhere closer to the truth about sexual violence. Because this happens every single time. I challenge you to name a piece of reporting on rape or a survivor’s personal account that was not met with an immediate and predictable backlash, invasive questions about the victim's credibility, a chorus defending the alleged rapist's good name.

Steubenville. Maryville. Woody Allen. Bill Cosby. Jian Ghomeshi. The cycle is exhausting. The regularity of the violence is numbing.

So when I am asked by someone like Richard Bradley to consider confirmation bias while reading a report on a horrific gang rape, I can only think of the 60 percent of rapes that never get reported to the police. Of the 88 percent of perpetrators who will never be arrested, the 91 percent who will never face prosecution, the 97 percent who will never see prison time for their crime. I can only think of the police forces in New Orleans, Tallahassee and across the country that systematically ignore reports of sexual violence. Or the schools currently under investigation for the same indifference and willful silencing of victims.

And in all of this, we have lost the point of Erdely’s piece. We have lost Jackie. We have lost the other women, some who spoke under their own names and others who requested anonymity, whose sexual assaults were also ignored by the University of Virginia. We have stopped talking about Liz Seccuro, who recounted in the piece how she was also gang raped by fraternity members at Phi Kappa Psi and was later asked by campus officials if maybe her rape was "just regrettable sex." (One of the men who raped Securro was eventually convicted of aggravated sexual battery -- two decades later.)

There is no way to talk about rape and escape this kind of interrogation, this questioning of character and motives and bias. How many of the people calling foul on this report as a matter of journalistic ethics in investigative reporting were also attacking Lena Dunham for including a chapter in her memoir about being raped while at college. Dunham used a pseudonym for her rapist in that personal essay, but she was still accused of lying -- and ruining a man's life.

Or each of the women who have come forward to say that they were drugged and raped by Bill Cosby, who have been called social climbers, liars. Or every woman who has ever shared her story only to be told, We do not believe you.

Toward the middle of the Rolling Stone piece, Jackie commented on how demoralizing the entire ordeal had felt since she first tried to find some kind of accountability after her rape. How predictable the university’s response was, how defeating the process felt. "It makes me really depressed, almost," she told Erdely. "There's always gonna be another Friday night, and another fraternity party, and another girl."

She’s right. She’s so devastatingly right. We keep seeing to it that she's right.