Peter King's racial hypocrisy: Why this police apologist is the king of privilege

If the GOP congressman (and NYPD defender) participated in the #CrimingWhileWhite hashtag, he'd have plenty to say 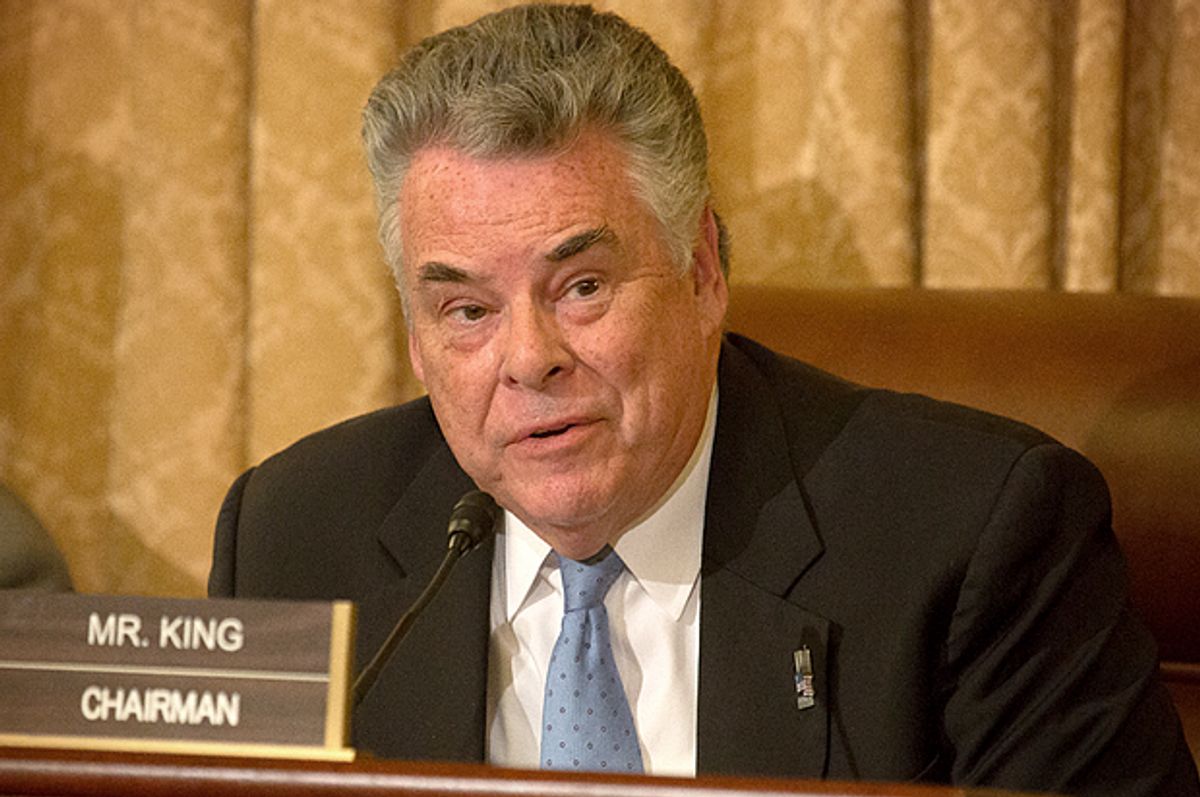 About two hours after a grand jury in New York announced on Wednesday that the cop, Daniel Pantaleo, who killed Eric Garner in a chokehold that had been banned by the NYPD, would not face manslaughter charges, the hashtag "CrimingWhileWhite" started trending on Twitter. White person after white person described what they had done -- shoplifting, DUI, trespass, even punching cops -- without getting charged, much less shot.

While it was greeted with mixed feelings -- were the white tweeters boasting? some asked -- it seems to have been meant as an admission of white privilege, of the ways many cops treat white people in this country with deference where they would treat black people doing the same thing with fear and sometimes lethal force.

As if the asphyxiation of someone who did no more than break up a fight while possessing untaxed cigarettes within view of New York City's skyscrapers needed a hashtag. Like Mike Brown, who was killed in Ferguson, Missouri, and whose killer also wasn't indicted, Garner was unarmed when he was killed by Pantaleo.

Of course, the bankers in those skyscrapers who took the homes of millions without any proof of ownership, the bankers who colluded to fix monetary rates like LIBOR so they would profit while cities across the country lost, the bankers who helped drug cartels and terrorists launder money -- they're the quintessential example of unequal justice in this country. We need look no further than New York's commanding skyline to realize some of the people who do the most damage enjoy the most impunity.

Still, there is perhaps no better example of #CrimingWhileWhite than Long Island congressman Peter King.

It was bad enough, after Darren Wilson didn't get charged for shooting the unarmed Mike Brown, that King called on President Obama to invite Wilson to the White House. "You’ve gone through four months of smear and slander," King scripted the president's invitation to Wilson, "and the least we can do is tell you that it’s unfortunate that it happened and thank you for doing your job," King imagined the president addressing a guy who killed a black teenager.

Then on Wednesday, King called for New Yorkers to respect the grand jury's decision not to indict a man who had killed another using banned techniques. He went on to demand that "It is time for all New Yorkers - and indeed all Americans - to acknowledge" that "no organization has done more to safeguard the lives of young African-Americans in New York City than the NYPD."

Once King got his mug on TV, his comments grew more incendiary, fact-checking the dead victim: “The fact of the matter is, if you can’t breathe, you can’t talk.” If Garner weren't obese and an asthmatic, King suggested, the lethal chokehold might not have killed him.

King has long been a pal of New York's law enforcement. Not only has he spent years ardently defending the NYPD for profiling Muslims -- even his own Muslim constituents. But he got in trouble -- or rather, got U.S. marshals in trouble -- a few years back when he donned a badge and then posted video of himself riding along on a fugitive sting. As a U.S. marshal spokesperson explained, federal policy "prohibit[s] individuals who are not U.S. Marshals employees or Task Force Officers from filming inside a private residence."

But Peter King's #CrimingWhileWhite tweets wouldn't be limited to improperly filming and publishing the workings of law enforcement as they raid private dwellings.

Indeed, if King had to confess the things that might get him arrested -- even shot or drone-killed -- if he were black or brown, he'd have to list support for terrorism.

As a 2005 New York Sun profile of King's support for Irish terrorists described, "The politician once called the IRA 'the legitimate voice of occupied Ireland,' he was banned from the BBC by British censors for his pro-IRA views, and he refused to denounce the IRA when one of its mortar bombs killed nine Northern Irish police officers." As it explains, King also spoke at fundraising events for Noraid, a group that raised funds for Irish extremism. "He spoke regularly at Noraid protests and became close to the group's publicity director, the Bronx lawyer Martin Galvin, a figure reviled by the British."

A 2010 CIA document leaked to WikiLeaks contemplated official government embarrassment if foreigners raised the terrorist groups to which  King has historic ties. "What If Foreigners See the United States as an 'Exporter of Terrorism'?" the document asked. It pointed to Noraid, which King had supported. "The US-based Irish Northern Aid Committee (NORAID), founded in the late 1960s, provided the Provisional Irish Republican Army (PIRA) with money that was frequently used for arms purchases," the intelligence document explained, listing Irish-American support for Irish terrorism among other acts that might lead other countries  to accuse the United States of hypocrisy on terrorism. "Only after repeated high-level British requests and then London’s support for our bombing of Libya in the 1980s did the US Government crack down on IrishAmerican support for the IRA."

Peter King may have supported Irish terrorists out of tribal allegiance or political expedience. Still, that qualifies it as the kind of thing a white person gets off for where a person of color might be killed. As white people consider how their lives might be ruined by the heavy policing experienced by people of color, perhaps it's time for King to reflect on his own white privilege.