The year in TV: How 2014 remade the workplace comedy 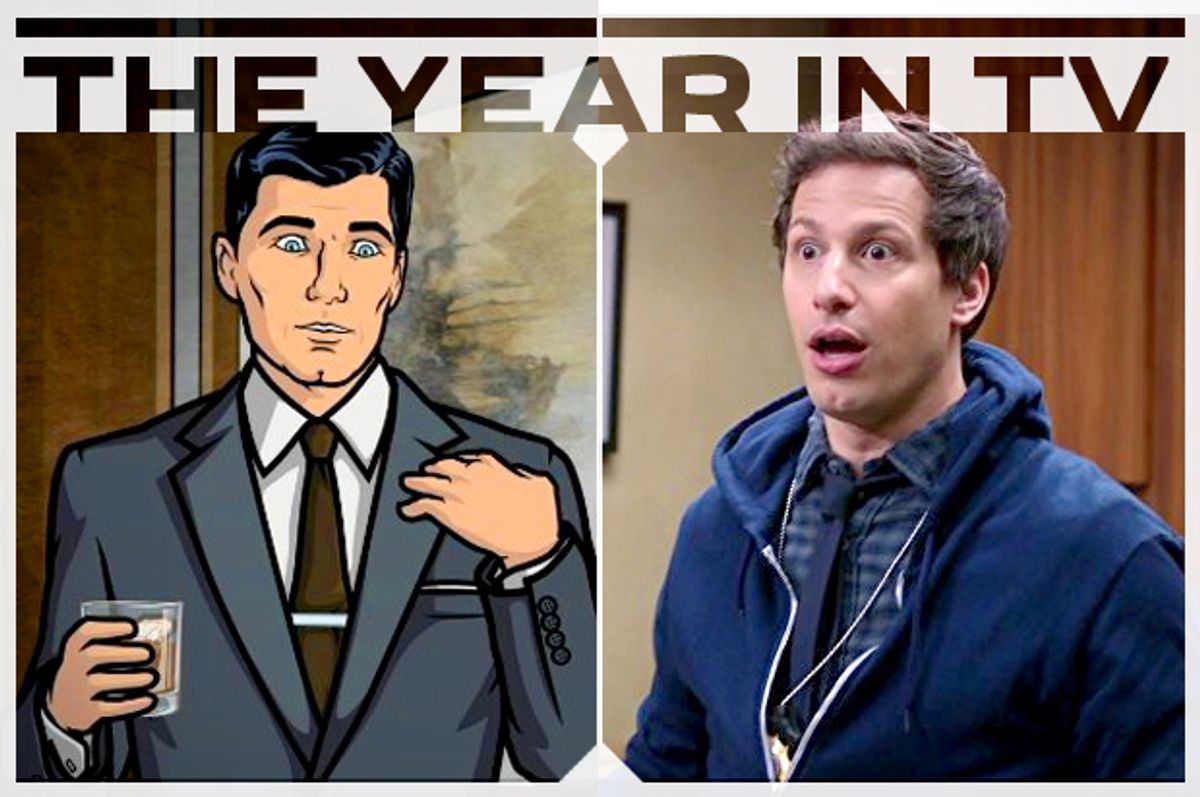 This is the third piece in a series unpacking the shows that broke serious new ground on TV in 2014.

It’s very American to build a television show around the workplace. Work occupies a fraught, complicated place in our lives; evidence indicates we work too much but feel like we’re never working enough. An increasing number of Americans won’t take their paid time off, citing fear of losing their jobs, a certainty no one else could do the work they do, and concern over what their co-workers would think. Technology that makes it possible to work remotely and flexibly also makes it possible to work constantly — nights, weekends, holidays. “Overwork has become a credential of prosperity,” writes James Surowiecki at the New Yorker, writing about the culture of work on Wall Street — and consciously or unconsciously paraphrasing the conclusions of Max Weber’s “The Protestant Ethic and The Spirit of Capitalism.” And while we’re rehashing college curricula, let’s remember the following: Real wages have been stagnant for decades, meaning that with every passing year, unless you are very, very wealthy, we are as a whole working more and being paid less.

The enduring mythos of the workplace show — from what is widely considered to be the first workplace show, “Hill Street Blues,” through to “ER” and “The Newsroom” — is that work can be your family, your friends, your religion and your sustenance. It’s a passion project worth this sacrifice of long hours or poor pay, because it’s all there is. The ensemble casts of workplace shows often act as a repository of potential love interests, surrogate family members, best friends and (when necessary) barely concealed mutual enmity; an average character’s social life is condensed to one place, with one set of people. It’s a simultaneously alluring and depressing fantasy: Your whole world could be your work, but your whole world could be your work.

Of course we watch workplace comedies; this shared delusion of what it means to be employed begs for some lighthearted interpretation. Two of the best shows of this year are comedies that take this fraught setting and subvert it, in ways that are both very funny and surprisingly heartwarming. Both “Brooklyn Nine-Nine” and “Archer” look deceptively commonplace: The former has been created in the mold of “Parks and Recreation” and “The Office,” a single-camera workplace sitcom with a broad, lovable cast; the latter is an adult animated series about spies that gets to draw its characters into the Vatican instead of filming there. But much of their brilliance draws from how they both challenge expectations of the hierarchy of the workplace — and the goofy, surreal quality of each show’s humor, presented as the only possible response to a broken system.

It is actually a little eerie how much the two shows have in common. “Archer,” the older show, may well have influenced “Brooklyn Nine-Nine,” and the two shows air on sister networks (the former on FX, the latter on Fox). Both follow a motley crew of law enforcement officers: “Brooklyn Nine-Nine” is about a police precinct in Park Slope, and “Archer” is about secret agents in Manhattan who are working for the good guys at least 51 percent of the time. Both teams are led by older, distant, deadpan-hilarious characters: In “Brooklyn Nine-Nine,” that’s Andre Braugher’s Capt. Holt, played with stone-faced straight-man sincerity; in “Archer,” it’s Jessica Walter’s Malory Archer, just a shade or two off of her character in “Arrested Development.”

But the protagonist of each is a wiseass white boy who is both infuriating and very, very good at his job: Andy Samberg’s Jake Peralta and H. Jon Benjamin’s Sterling Archer. Much of each show focuses on the education of its protagonist — these man-boys who never quite seem to get the hang of growing up, favoring instead complicated office pranks and playing with guns. (Peralta’s scheme for stealing Capt. Holt’s watch this Halloween is rivaled only by Archer’s increasingly insane voice-mail gags.) Both men have love interests played by their work partners, who are both women of color: Melissa Fumero’s Amy Santiago, a type-A overachiever who is angling for Holt’s job, and Aisha Tyler’s Lana Kane, a type-A overachiever who is angling for Malory’s job. And as with so many workplace shows, both rely on the ensemble of co-workers to provide romance, friendship, family and, when necessary, enmity to carry the plot.

But unlike those other shows, both “Archer” and “Brooklyn Nine-Nine” go out of their way to expose their insular, codependent ensembles as totally bananas; only crazy people would be this invested in their work. “Archer” has a lot more leeway for the absurd — it’s an animated show about spies. It can do whatever it wants, but given that “Brooklyn Nine-Nine’s” Sgt. Jeffords (Terry Crews) named his twin girls Cagney and Lacey, there’s a significant amount of the absurd in the fictional precinct, too.

As far as surreal goes, though, “Archer” pulled off a tour de force this year, when, in its fifth season, it arbitrarily converted all of its secret agents into drug dealers. There was some thin plot explanation for this — thin — but then again, part of the joke was that it was so convenient and random. The characters commented on the implausibility of it; their reactions were just short of turning to the fourth wall and saying to their creator, Adam Reed, “Hey, Adam, are you just bored today?” It’s a ruthlessly clever and brilliantly executed move — how many other shows could so nimbly execute a total premise-shift five seasons in, so total that the show briefly even changed its name, from “Archer” to “Archer: Vice”? — and it had the further effect of pulling their workplace right out from under the characters’ noses. The chilling (and hilarious) part was that everyone kind of did the same things, as either secret agents for hire or mercenary drug dealers. Not only is this ensemble full of kooks who would all choose to live together even when they don’t like each other very much, but also, the work they’re doing is basically meaningless to both the bemused characters and us, the highly amused viewers.

While “Archer” took the path of surrealism, “Brooklyn Nine-Nine” took the path of utopian optimism — offering a rose-tinted interpretation of what the NYPD could be. The show was notable right from the start for casting an astonishingly diverse set of characters; more than half the original cast are people of color, which likely makes “Brooklyn Nine-Nine” the most accurate snapshot of New York City’s diversity on television. Braugher’s Holt, additionally, is an out gay man, a characteristic that is neither all of his character nor none of his character. The diversity would be less meaningful if the cast wasn’t extraordinarily talented and well-suited to each other; Crews has found a place for himself to let his comedic talents shine, Samberg is significantly more fun when his goofiness can be balanced out by Braugher’s deadpan, and every other actor is a consistent source of wacky comic relief. A lot of “Archer’s" brilliance comes from the way Reed makes his murderous, womanizing, alcoholic spy with mommy issues into the show’s hero and villain, at once his co-workers’ greatest asset and Achilles' heel. “Brooklyn Nine-Nine” invests more in how the characters in the precinct fit together to create some kind of harmony — following threads of character development through episodes, and allowing the team to adjust around each ensemble member.

“Brooklyn Nine-Nine” showrunner Dan Goor and co-creator Michael Schur previously worked together on “Parks and Recreation” (and Schur previously worked on the American “The Office”). All three shows are characterized by a distinct optimism toward the working world; “The Office” started out as dark as its British counterpart, but eventually turned into quite a sunny show, and “Parks and Recreation” is likely one of the happiest shows on television. It’s interesting, though, that while these shows are optimistic, they’re not necessarily unrealistic, either: “Parks and Rec” makes hay out of nutty constituent calls and the depressing closed-mindedness of certain political leanings; “Brooklyn Nine-Nine” has somehow made a story line of the creation of a drug task force into something funny and interesting, which is a Herculean achievement. All three shows do not shy away from the trappings of boring middle America — Chili’s, pancakes, overnight shifts, committee meetings, required paperwork. The effect seems to be of these workplaces finding ways to make do, despite the bleak state of the working world.

“Archer” is a different beast, because it has so much more leeway. It borrows the most from “Mad Men” of any other show I’ve mentioned; Archer is a clear recast of Don Draper, right down to his physical appearance, and the production design of the show deliberately evokes a ‘60s aesthetic, even though the show is set in the present day. But there’s something a little nostalgic and a little critical there, too: In the ‘60s, in Don Draper’s SC&P, wages were still rising, and working didn’t seem quite so terrible. (The inflationary equivalent for 1964’s minimum wage of $2.50, in today’s dollars, is $19.18.) Archer’s turn to crime this season might be the first time the show is acknowledging the realities of the present-day — as Lana might say to Pam, she definitely deserves a raise.