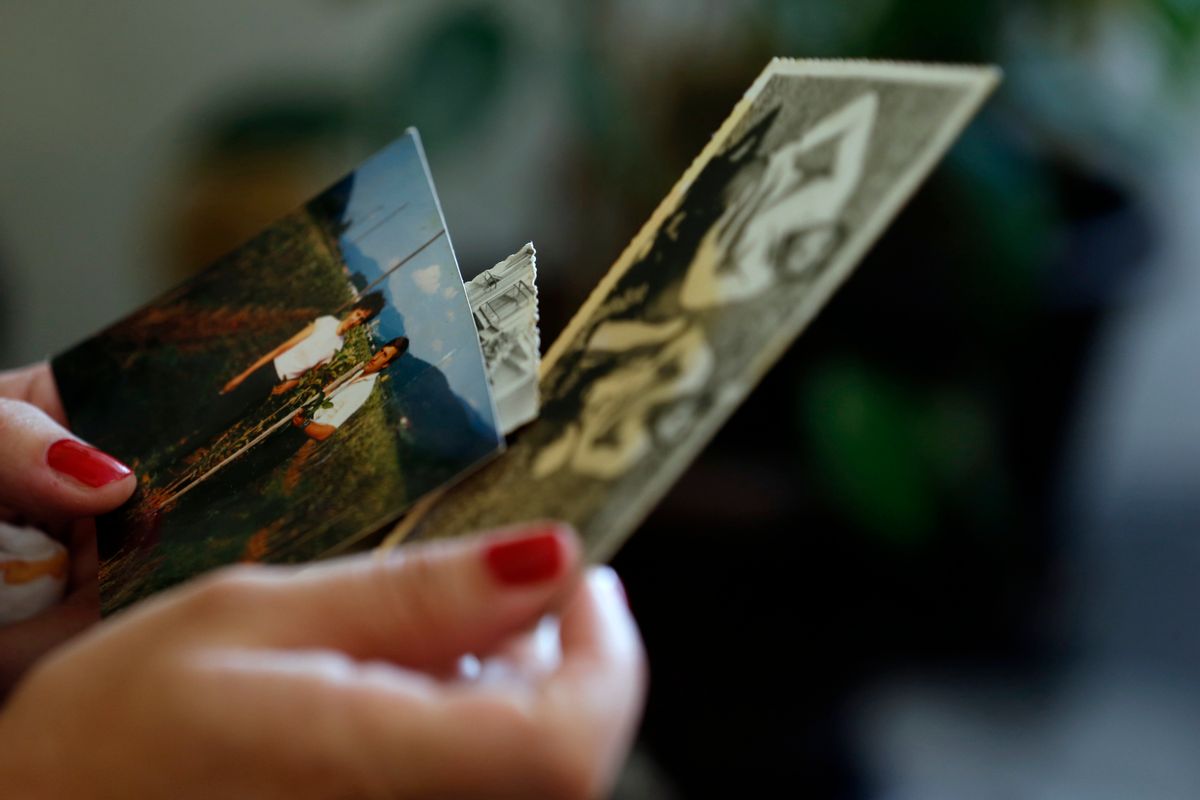 In this photo taken Wednesday, July 16, 2014, Selma Colovic-Memovic, the daughter of Fikret Memovic, looks at photographs of her father, railway worker from southwest Serbia, who was traveling back home from the capital, Belgrade, when his train unexpectedly stopped at a remote station in war-ravaged eastern Bosnia _ a lone post on the hilly boundary with Serbia, where he himself had worked only days before, in Prijepolje, Serbia. A group of armed Bosnian Serb militia _ some wearing long beards of the nationalist World War II Chetnik movement _ stormed in and checked the passengersâ IDs. They abducted only non-Serbs _ 18 Muslims and one Croat _ after recognizing their Muslim names. No one tried to stop them. The train went on in eery silence among remaining passengers after some 30 minutes. (AP Photo/Darko Vojinovic) (Darko Vojinovic)
--

PRIJEPOLJE, Serbia (AP) — Police in Serbia and Bosnia arrested 15 people Friday in a wartime massacre that traumatized the Balkans and came to symbolize a culture of impunity that still shields notorious wartime death squads and their masters.

Prosecutors from the two bitter wartime enemy countries told The Associated Press they worked together to crack the case of the Strpci massacre of Feb. 27, 1993, in which 19 men were snatched off a train at the height of the Balkan conflict.

Officers carried out a pre-dawn sweep that netted 10 suspects in Bosnia and five in Serbia, including the brother of a jailed warlord, ex-militia members and a former Bosnian Serb general who commanded the military in the area.

"We are now on the path to solve the murder that has been hidden for more than 20 years," said Serbian war crimes prosecutor Bruno Vekaric. "We have to do it for the innocent victims."

There was no comment from the jailed suspects or their lawyers.

The question now is whether the suspects will point to the men above them who ordered the killings, investigators say. If so, they could implicate some of Serbia's top former and current officials, who were prominent in the war machine of the president at the time, Slobodan Milosevic. While the Serbian government now acknowledges Strpci as a war crime, the killers are still seen by some in Serbia as war heroes.

The Associated Press obtained exclusive investigative documents in the probe, which is backed by the U.N. war crimes tribunal in The Hague, Netherlands. Together with witness testimony, they provide the first detailed look at a tragedy whose wounds fester even today because the killers were not identified and the victims' families not compensated.

The documents and witness accounts say the train made an unscheduled stop at the station of Strpci, a remote outpost in eastern Bosnia on the border with Serbia. A group of Bosnian Serb militiamen identified 18 Bosnian Muslims and one Croat through their names and carted them off. The men were herded into a military truck, which took them to a village school. Inside the gym, the militiamen stripped the captives. Then they beat them with rifle butts. Drenched in blood, their hands tied with wire, the men were taken by truck to an empty house near the Drina river. There, they were shot in the back of the head.

The Strpci massacre was part of a conflict that left more than 100,000 people dead and millions displaced. Although all sides have been accused of war crimes, historians say Serbs in Bosnia and Croatia carried out the worst atrocities in an effort to create an ethnically pure territory.

Prosecutors have identified Milan Lukic, one of the most feared Bosnian Serb warlords of the time, as the ringleader of the massacre, which was carefully planned and meticulously executed. Lukic is already serving a life sentence handed down by the U.N. tribunal for separate atrocities against Muslims in Bosnia.

The investigation also tackled the thorny issue of who knew what. Lukic was suspected of being recruited by Serbian state security, which deployed paramilitary units in Serb-controlled areas to eliminate the Bosnian Muslim population, Serbian and Bosnian Serb security officials told AP on condition of anonymity because they were not authorized to discuss the case.

The Bosnian Serb army was financed from Belgrade and controlled by the military and political leadership of Yugoslavia, comprised at the time of Serbia and Montenegro, according to court documents and officials, including former Montenegro President Momir Bulatovic. He denied knowing about the massacre in advance but acknowledged to the AP that senior officials, including himself, knew at once when it had been carried out.

"I knew about it right from the start," said Bulatovic, who is no longer in politics. "Those were criminals and killers."

A wartime document issued by the headquarters of Bosnian Serb warlord Gen. Ratko Mladic during the war, made available to the AP, points to a pattern of collusion between militias operating in the area and the Bosnian Serb leadership. The document ordered all troops in Bosnia to capture any Muslims passing through Serb-controlled territories, suggesting high-level responsibility in the Strpci abduction. Mladic has been charged with genocide by the U.N. war crimes tribunal in the Hague, along with Milosevic and Bosnian Serb leader Radovan Karadzic.

Aida Cerkez from Sarajevo, Bosnia, and Predrag Milic from Podgorica, Montenegro, contributed to this report.