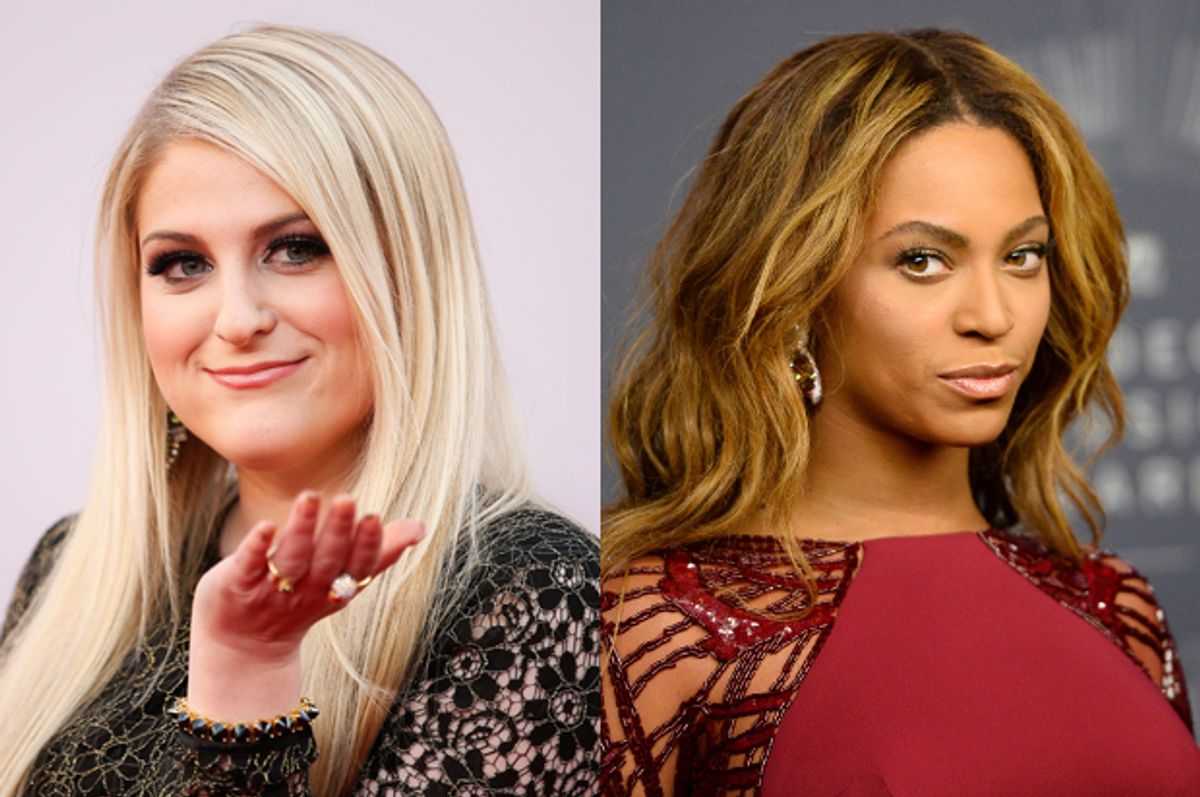 You’ll never go broke underestimating Recording Academy voters’ taste—the Best New Artist category seldom disappoints in that regard—but when the first round of 57th Grammy Awards were announced this morning, the absence of Beyoncé’s “Drunk In Love” among the nominees for Record of the Year upset quite a few prediction lists. With her 2013 eponymous album up for Best Urban Contemporary Album, Beyoncé now has the most nominations—47 and counting, since more nominations are still to be announced—of any female artist in Grammy history. But looking at the nominee field for Record of the Year, the absence of “Drunk In Love,” one of the most compelling singles of the last year, is notable.

Album of the Year won’t be announced until tonight (on the broadcast of “A Very Grammy Christmas,” no less) and a snub for the full “Beyoncé” would be ludicrous. But Record of the Year is a crucial category in a singles-driven music landscape. A quick recap of the crucial all-genre categories: Album of the Year recognizes full albums—they do still exist!—across all genres. Then there’s Song of the Year (nominees TBA), which is primarily a songwriting award. Record of the Year recognizes performance, production and engineering/mixing. It’s sort of a Best All-Around superlative for a single song. For that category, “Drunk In Love” clearly deserves a nomination, especially considering that Iggy Azalea’s “Fancy” and Meghan Trainor’s “All About That Bass” got nods instead.

The steamy, sexy strength of “Drunk in Love” lies not only in the pure power of Beyoncé’s voice, but in the song's many surprises—the varied vocal delivery, the layers of strings, skittering beats, weird vocal additions, and tempo changes. When Jay Z’s contribution to a song is its least-essential component (can we get a remix treatment on that Ike Turner reference, please?), you know you’ve crafted a complex, compelling song that it infinitely listenable and potentially influential. This song has legs.

Iggy Azalea’s “Fancy” (obligatory legal note: feat. Charli XCX) is a fun song, but there’s not a lot of there there. Aside from Azalea’s kind of delightful snarly attitude, it’s a fairly simple little party jam whose “Clueless” homage video is the most interesting thing about it. Azalea’s nod for Best New Artist, which, if she's lucky, she won’t win, is a much better fit. Meghan Trainor is charming and talented, and there’s nothing terribly objectionable about her virulently catchy hit, but “All About That Bass” is two jaunty steps up from a novelty song. It’s cute enough the way the bass line underscores her ode to “that booty, booty,” but ultimately simplistic. Again, the candy-colored video offers a hard sell for this one. I happen to like both of these songs, but in a just world, they wouldn’t be considered Record of the Year material.

The entire field’s not a write-off. Sia’s sturdy “Chandelier” is a breakthrough for her and a worthy opponent for Beyoncé, and she’s probably breathing a sigh of relief that she won’t have to test those waters. And Taylor Swift’s juggernaut anthem “Shake It Off” benefits as much from Swift’s wide-eyed sincerity and optimism as its winning horn line and infuriatingly successful repeating chorus. Even without the visuals of Swift dorking her way through the dance wing of a performing arts high school, “Shake It Off,” with its quotable philosophy and inescapable melody, is undeniably one of the signature songs of the last year. Of all the nominees, though, my money’s on Sam Smith to win. “Stay With Me” brings an award-bait blend of blue-eyed soul vocals, a contemporary beat and a gospel chorus to the table. The Darkchild version that caught the nomination also features Mary J. Blige’s rich vocals for an extra layer of gravity to balance Smith’s tremulous falsetto, which makes this version extra bullet-proof.

The Grammy Awards are February 8. Nominations continue to be released throughout the day—there are more than 80 categories, so it’s a process—and can be tracked by following the Grammys on Twitter.