Black America's pitiful allies: Why the Democratic Party needs to finally stand up on race

It's not enough to just say "black lives matter." Here's how the party of Obama and Clinton can prove it means it 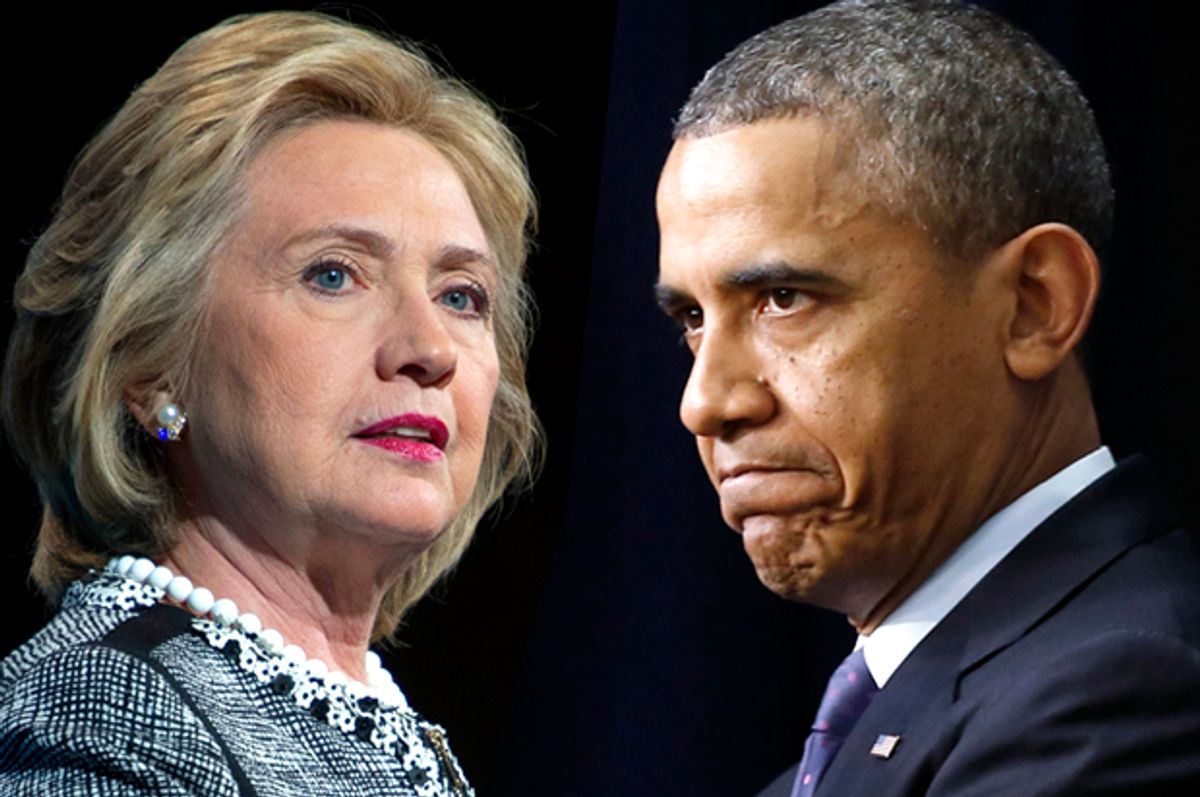 Not long after it was announced on Wednesday that officer Daniel Pantaleo would not be indicted for killing Eric Garner, an African-American Staten Island resident and father of six who was unarmed when he died, New York City Mayor Bill de Blasio used his bully pulpit to deliver what was the most consequential speech of his career. Aware of how festering anger over the exoneration of officer Darren Wilson would exacerbate the outrage many New Yorkers were certain to feel over Pantaleo’s non-indictment, de Blasio opened his remarks not with sterile platitudes about ours being “a nation of laws,” but by recognizing the anguish of Garner’s family and friends. “No family should have to go through what the Garner family went through,” de Blasio said, before noting that he and his wife, Chirlane McCray, had often been forced to engage in one of the most heartbreaking rituals of raising an African-American boy in this country: Delivering “the talk” to Dante, their teenage son.

Reminding anyone who may have forgotten how acutely, even painfully, he understood the issue may have been enough to defuse some of the potential charges of callousness sent de Blasio’s way. But to his credit, he didn’t stop there. While most politicians would have likely restricted their comments to the safe realm of personal tragedy, de Blasio instead tried to contextualize the moment, placing it firmly within America’s historical tradition of murderous racism. “We’re not just dealing with a problem in 2014,” de Blasio said, “we're not dealing with years of racism leading up to it, or decades of racism. We are dealing with centuries of racism that have brought us to this day. That is how profound the crisis is.” Going further than that, the mayor not only acknowledged a favored phrase of anti-racist activists — “black lives matter” — but willfully associated himself with the view of American society as inherently racist that serves as its foundation. “It should be self-evident,” de Blasio said, “but our history requires us to say that black lives matter.”

It would obviously be too much to say de Blasio’s gesture carried the same symbolic and moral force as when Lyndon Johnson, in a major address to Congress and the nation, used the language of the civil rights movement to promise “we shall overcome.” After all, de Blasio, unlike Johnson, was not using the rhetoric of activists while simultaneously pushing through massive, epochal legislative reform. (As author-activist Shaun King noted at the time on Twitter, de Blasio’s outreach was also an indirect acknowledgment that he could do little of substance to help the Garners.) But at the same time, it would be a mistake to shrug off de Blasio’s words completely, as if quite clearly siding with critics of his own police force carried no political risks. It’s true that words can only go so far and that actions speak louder and last longer; but even if de Blasio wasn’t entirely the leader the NYPD’s many critics would have hoped, he was at least making an effort to do more than the bare minimum.

In all likelihood, these small potatoes would likely look even smaller if not for one frustrating and increasingly unsustainable reality: among Democrats of his stature, de Blasio’s willingness to pick a side leaves him standing nearly alone. Certainly, when compared to the behavior of Missouri Gov. Jay Nixon and St. Louis County prosecutor Robert McCulloch — who are both members of the Democratic Party, but proved themselves to be so in the George Wallace mode — de Blasio is a paragon of integrity and courage. But even when stacked against national Democrats, de Blasio’s outspokenness is noteworthy. Outgoing Senate Majority Leader Harry Reid offered little more than a tweet; House Minority Leader Nancy Pelosi merely said that the state-sanctioned killing of Michael Brown, Eric Garner and 12-year-old Cleveland resident Tamir Rice “appear” to show “a clear pattern” — a pattern about which she declined to elaborate. And then, of course, there’s President Obama, the most important Democrat of all.

Now, in fairness to the president, the political and social constraints placed on him as the nation’s first African-American chief executive are unprecedented and likely impossible to fully measure. As the Atlantic’s Ta-Nehisi Coates so memorably put it, Barack Obama’s presidency has been defined in part by white Americans’ unspoken demand that he be “twice as good but … half as black.” When Obama previously waded into an emotionally and racially charged public controversy — whether it was early in his presidency, with Henry Louis Gates Jr., or more recently, with Trayvon Martin — his utterly banal comments were used as an excuse by many of his most bigoted critics to stoke white resentment and inspire calls that “we” strive to “take our country back.” Never did his entrance into the debate lead to reasonable, humane conversation. As the White House itself has concluded, feelings about the president are so strong and polarized that his intervention into racial issues does no good. In fact, it may only makes things worse.

Yet even if Obama’s predicament is not one of his own making, the truth of the matter is that during this especially fraught moment, when many African-Americans may feel more isolated from the rest of their country than they have since Hurricane Katrina, the national Democratic Party has done precious little to defend, respect or honor its most vital, loyal, threatened constituents. President Obama’s response to the decision in Ferguson was widely seen as tepid and tortured, more concerned with maintaining a superhuman balance between the law and justice than with acknowledging the profound evil of a system that gives the state license to kill society’s most marginalized members. And as mentioned, besides de Blasio, no white Democrats of comparable influence have stepped in to fill the void that Obama — again, for reasons complicated in nature — has left in his wake.

Usually, you’d expect and hope that Democrats angling to succeed Obama in 2017 would recognize the opportunity and grab the spotlight. But because former Secretary of State Hillary Clinton’s shadow campaign has paralyzed most of them, as they wait for her to make her final announcement, the virtual silence has been deafening. The onus, therefore, has fallen onto Clinton herself, who has for the most part opted to take her time before venturing off the sidelines, perhaps most noticeably when she waited nearly three weeks to weigh in on the killing of Michael Brown. This hasn’t exactly come as a surprise — like many successful politicians, Clinton is known for caution — but it’s been discouraging nevertheless. If reports are true and the Democratic Party’s leadership (which surely includes Clinton in reality, if not in name) is worried about lacking an identity, how could neglecting its most dedicated partisans be anything but a mistake, both morally and politically?

Yesterday brought a small cause for optimism, or at least guarded hope. As Salon alum Alex Seitz-Wald reported Thursday for MSNBC, the former secretary of state gave an address in Boston on Thursday afternoon that featured rhetoric “stronger” than almost anything we’ve heard from her or other leading Democrats thus far. Breaking from the wait-and-see approach that characterized her response to the Ferguson killing, Clinton told her audience, Massachusetts Conference for Women, that the lack of consequences for Eric Garner’s homicide showed it was time for every American “to grapple with some hard truths about race and justice in America.” Rather than leaving it at that, Clinton went on to urge Americans not to turn away from the unpleasantness in Missouri, Ohio and New York due to the mistaken belief that it somehow did not affect them. “These tragedies did not happen in some faraway place,” she said. “They didn’t happen to some other people. These are our streets, our children, our fellow Americans, and our grief.”

More encouragingly, Clinton also tied these emotional appeals to a policy critique that, one hopes, will become a major feature of her almost-certain 2016 campaign. “The United States has less than 5 percent of the world’s population, yet we have almost 25 percent of the world’s total prison population,” Clinton noted, after reminding how it’s African-Americans who overwhelmingly bear the brunt of our unparalleled carceral state. “It is because we have allowed our criminal justice system to get out of balance,” she added, “and I personally hope that these tragedies give us the opportunity to come together as a nation to find our balance again.”

As with de Blasio’s comments on Wednesday, Clinton’s slow amble toward embracing the growing movement to reform America’s racist and destructive criminal justice system is too much of a half-measure to warrant a declaration of victory or celebratory parade. If Democrats are to do not only what is politically wise but also morally correct, they’ll have to prove that, to them, “black lives matter” is more than just a slogan.