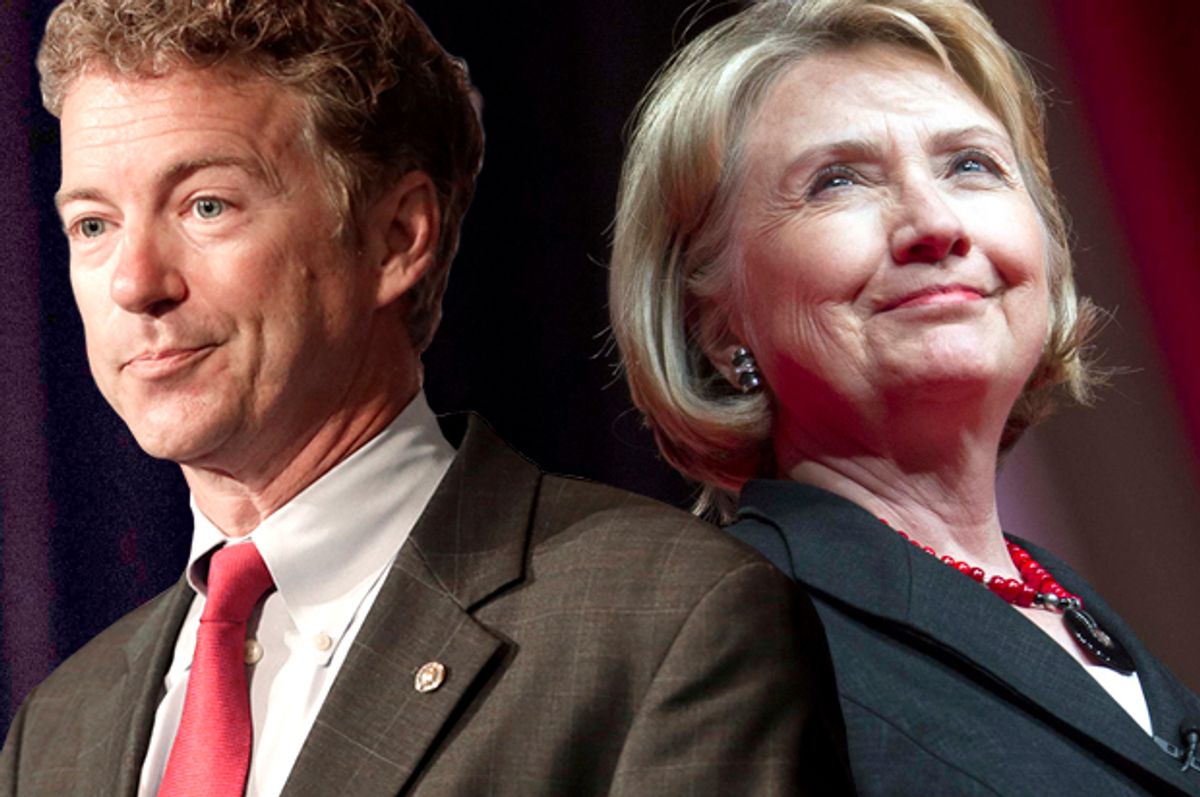 I got a lot of pushback, mainly from Rand Paul fanboys, to my suggestion that the Kentucky senator’s blaming Eric Garner’s death on cigarette taxes was tin-eared, to say the least.  The complaints, on Twitter and (surprisingly) in a lot of personal email, took two forms: 1) I’m a nanny state liberal who doesn’t care about the wanton abuse of state power to not only impose taxes but then aggressively police their enforcement. And 2) I’m terrified that Rand Paul can beat Hillary Clinton, especially because he’s better than she is when it comes to issues of our expanding police state.

On the first point: I support high cigarette taxes, because cigarettes kill people and impose vast costs on society. I regret that those taxes fall heavily on the poor, and I support community programs to help people stop smoking and improve their health. But on the issue of enforcement, cigarette taxes are just one of many, many “laws” that are over-enforced or arbitrarily enforced in poor communities, in order to give the police greater control over the population.

From aggressive traffic stops to littering citations to harsher penalties for crack cocaine than powder, and higher rates of marijuana busts, we know that comparatively small infractions are policed heavily in low-income black communities, to keep people ensnared with the cops and to keep them controlled. Eric Garner didn’t die because the police were dispassionately trying to enforce a nanny-state law taxing cigarettes, but because cops routinely find ways to harass low-income black men, and then escalate the situation, often with violence.

On the second point, that I’m “afraid” of Rand Paul because he’s a threat to Hillary Clinton, well, that’s even sillier. First, I’ve said all I have to say about Hillary Clinton here, in the Nation. I respect her, I may support her in the Democratic primary, but I may not, depending on who’s running. However, I think she’s much better than any Republican eyeing the race, and that includes Paul – including on criminal justice issues.

Contrast her reply to the Eric Garner verdict with Paul’s. Paul spent exactly one sentence expressing any kind of personal regret over either Garner’s death or the verdict. “Well, you know, I think it’s hard not to watch that video of him saying ‘I can’t breathe, I can’t breathe’ and not be horrified by it. But I think there’s something bigger than the individual circumstances.” He then goes on to blame “some politician” who “put a tax” on cigarettes, and another politician who told police, “Hey, we want you arresting people for selling a loose cigarette.”

Nothing, either, about disparate police decisions to stop and frisk, or disparate sentencing, or everything else we know contributes to the criminal justice crisis facing black communities.

Now here’s Hillary Clinton, a day later. Not only did she express personal regret over “the pain and frustrations that many Americans are feeling” about Garner’s death and his killer’s going free, she immediately backed a federal probe into the Mike Brown and Eric Garner cases, and specifically into the use of the chokehold that killed Garner.

“Each of us has to grapple with some hard truths about race and justice in America. Because despite all the progress we’ve made together, African-Americans, and most particularly, African-American men, are still more likely to be stopped and searched by police, charged with crimes, and sentenced to longer prison terms,” she said.

“The United States has less than 5 percent of the world’s population, yet we have almost 25 percent of the world’s total prison population,” she said, and it’s not because Americans are more inclined to law-breaking. “It is because we have allowed our criminal justice system to get out of balance. And I personally hope that these tragedies give us the opportunity to come together as a nation to find our balance again.”

And finally, she spoke out against the militarization of American police forces that made Ferguson seem like an occupied state during protests over Brown’s killing. “Let’s make sure that federal funds to state and local law enforcement are used to bolster best practices, rather than buy weapons of war that have no place on our streets or contribute to unnecessary force or arrests,”

If she makes these major themes of her campaign, rather than something she talks about when confronted with the latest police abuse – she’ll be a more exciting and important candidate than many expect.

To be fair, Paul has discussed some of these same issues. He criticized police militarization after Ferguson. He opposes mandatory minimum sentences for nonviolent drug offenses, and advocates returning voting rights to nonviolent felons.  On Thursday, after Clinton’s remarks on the Garner verdict, he told CNN he’d like to work with her on criminal justice reform. That’s great.

But he only seems to be able to talk about those issues abstractly. Faced with a human situation like Eric Garner’s, he lapses into his libertarian default – he blames it on taxes and big government. He doesn’t seem to have the facility to be able to hold both sets of ideas in his mind together: Yes, Garner’s killing is an example of poor police procedure that’s too common in black communities, and overzealous enforcement of taxes that shouldn’t exist (in his opinion), anyway. A good politician could have brought both points of view to the Garner tragedy – especially one who prides himself on reaching out to African-Americans.

But to have expressed such sentiments about Garner’s plight, Paul would have had to do something rather courageous, and that’s stand up in real time and state an opinion that is hugely unpopular among his friends on Fox. To humanize Garner, let alone Mike Brown, would challenge the narrative that these two big black guys essentially got what they deserved for resisting arrest. The GOP base is in a paroxysm of righteousness that good cops are being smeared by liberals defending criminals.

And that’s why, to be honest, Hillary Clinton’s remarks may not seem risky, but they are. I’m with Elias Isquith about the short supply of Democratic politicians willing to tell the truth about race, even as African-Americans are the most loyal Democrats. But the party is still worrying about whether it can win back some of the white working-class voters it’s hemorrhaged in the Obama years, and Clinton is often seen as a valuable asset in that campaign. With her remarks Thursday she risked alienating some of the white voters who have her goofier campaign advocates dreaming she can turn places like Arkansas and Kentucky blue again. Given the politics of the Democratic Party right now, Clinton said more than she could have. Rand Paul said less. One of them deserves credit.