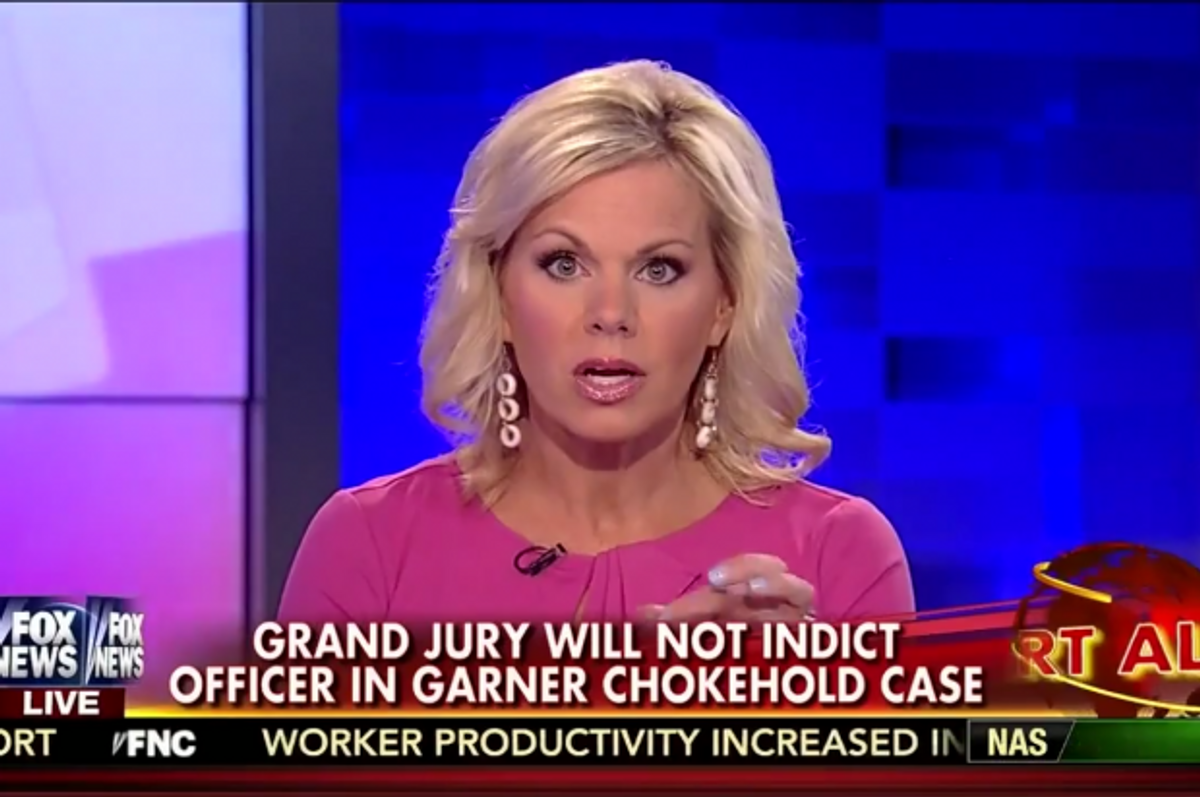 On Wednesday night, Stepford Fox News woman, Gretchen Carlson, was very concerned about the grand jury's decision not to indict police officer Daniel Pantaleo for choking Eric Garner to death in Staten Island. She was concerned that it might "cause problems" and that anger about it might possibly even affect the previously scheduled annual "tree lighting ceremony" at Rockefeller Center. She hoped "nothing's going to happen in New York City today." That really would be terrible. At least she has it all in perspective. Sadly, her fears came true. Something did happen. Hundreds of black and white New Yorkers marched and peacefully demonstrated. 83 were arrested. The Feds opened a civil right inquiry.  Mayor Bill De Blasio canceled his appearance at the tree lighting ceremony.

Republican congressman Peter King of New York is not a doctor, and doesn't play one on TV, but he does think Eric Garner was responsible for his own death. After the grand jury decision not to indict the officer who choked Garner to death was announced, King said if Garner had been healthier, he would not have died.

"If he had not had asthma, and a heart condition and was so obese, almost definitely he would not have died from this," King told CNN's Wolf Blitzer during an interview. And despite the fact that Garner is clearly heard on the video of the incident repeately saying he couldn't breathe, King added that, "police had no reason to know that he was in serious condition."

According to King, people being arrested are always complaining about something: "'You're breaking my arm, you're choking me, you're doing this,' police hear this all the time," King, who is not a cop, (or a doctor) said.

Lest there were any doubts about where King's sympathies lie, he tweeted his praise for the grand jury's decision not to indict.

Rand Paul had a strange take on what caused the death of Eric Garner. But then again, Rand Paul is a really strange guy, who has somehow managed to convince even a few liberal people that he is not the whacko conspiracy theorist that he actually is. On "Hardball" with Chris Matthews, Paul blamed taxes for Garner's death, because Garner was accused by cops of selling loose, untaxed cigarettes. Paul said taxes were the "larger issue," yes, larger than the killing of a man. Maybe this is not surprising, since in Paul's libertarian fantasy world, taxes and the government are always the problem.  But it is bizarre, and ought to give pause to anyone considering supporting this kook for higher office. Here's Paul:

Well you know I think it’s hard not to watch that video of him saying ‘I can’t breathe, I can’t breathe’ and not be horrified by it. But I think there’s something bigger than the individual circumstances. Obviously, the individual circumstances are important. But I think it is also important to know that some politician put a tax of $5.85 on a pack of cigarettes so that driven cigarettes underground by making them so expensive. But then some politician also had to direct the police to say, ‘hey we want you arresting people for selling a loose cigarette.’ And for someone to die over breaking that law, there really is no excuse for it. But I do blame the politicians. We put our police in a difficult situation with bad laws.

It's almost as bad as thinking the tree lighting ceremony is most important thing in the world. But then, Gretchen Carlson isn't running for president.

Oddly enough, Bill O'Reilly, in a surprise move, showed a modicum of compassion about the Garner case. "I will say, that upon seeing the video that you just saw, and hearing Mr. Garner say he could not breathe, I was extremely troubled," he told his viewers Wednesday night. "I would have loosened my grip. I desperately wish the officer would have done that."

But, O'Reilly added, it was a little bit Garner's fault.

"Yes, he should not have resisted, but all Americans, every one of us, should pity Mr. Garner and his family," he continued. "He did not deserve what happened to him. And I think Officer Pantaleo and every other American police officer — every one — would agree with me. He didn't deserve that."

But don't worry. All is still right with the world. O'Reilly still insists that white privilege does not exist, and police officers don't target blacks more than whites. In the next segment with Tavis Smiley, O'Reilly disagreed that there is an "epidemic" of police officers killing blacks.