The boggling mixed signals of "Peter Pan Live!": Why on earth did NBC decide to do this show?

"Peter Pan" wasn't a technical disaster or a racist cringe-fest -- but man, was it weird 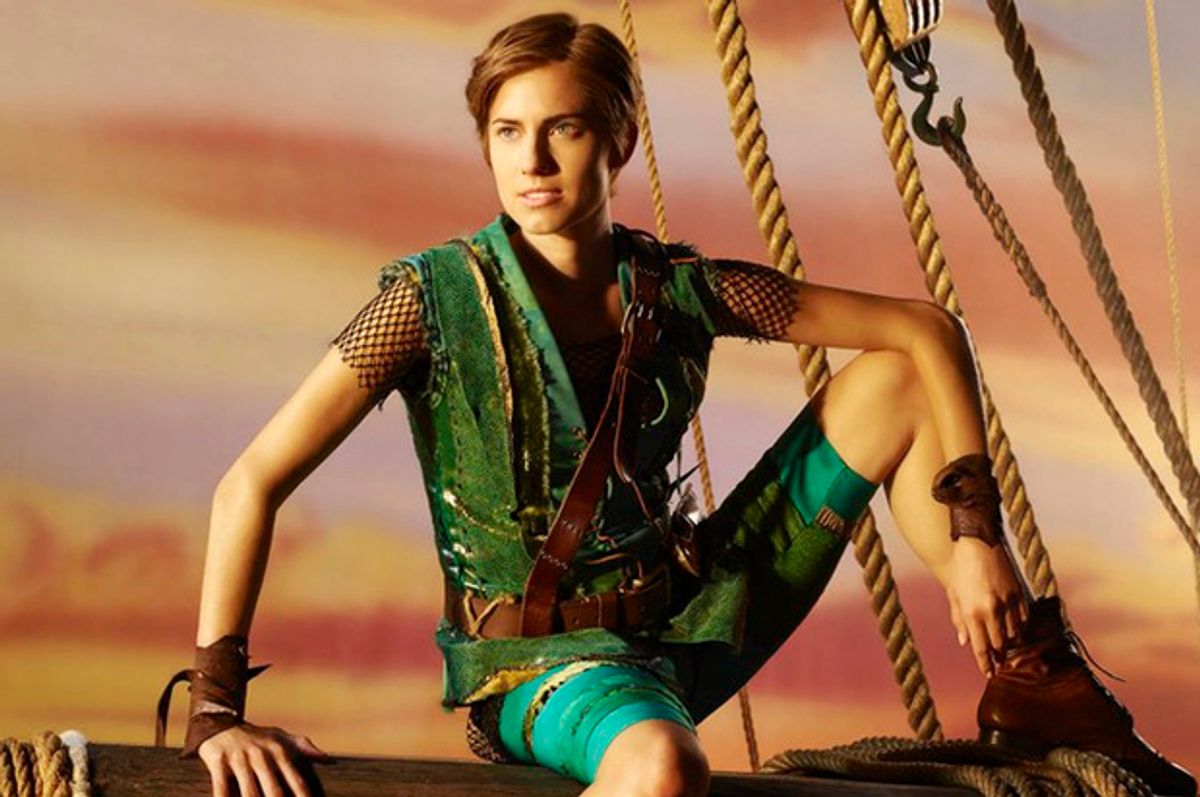 “Clap your hands if you believe!” a girl dressed unconvincingly as a boy implored the camera, breaking the fourth wall in a moment that is probably supposed to be really touching. Tinkerbell, a tiny blob of CGI, is dying in a faux-mossy lantern. The girl-boy — Allison Williams, playing Peter Pan — is dressed in studied scraps of fishnet and green leather breeches, and she is directing her concern at a camera that we have spent the whole evening dutifully pretending doesn’t exist, as it follows her around cavorting on wires hanging from the ceiling.

NBC’s “Peter Pan Live!” promises to be my next holiday tradition (and when NBC says holiday, it means Christmas), so it looks like I’m going to have very depressing Decembers from here on out. But before I wrap myself up in blankets on my easy chair and resign myself to a lifetime as Ebenezer Scrooge, please allow me to complain a little.

I understand that this live musical thing is a huge success for NBC — “The Sound Of Music” netted a cool 18 million viewers, which is an insane number for any programming that isn’t a sporting event in this day and age. For cast and crew, it’s a thrilling opportunity to make something that can’t be improved upon by a second take; for audiences, it’s a chance to come together for some appointment viewing (read: group snarking). Something could happen, is the exciting, fun part of live television; it’s what draws audiences to “Saturday Night Live,” the Super Bowl, and the Academy Awards, for different reasons.

But NBC’s production of this 1904 musical did nothing different, interesting or risky. (It might not even have been sung live! What was the point, NBC?) Aside from a few changes to Tiger Lily’s song to make it slightly less racist, “Peter Pan Live!” was “Peter Pan,” more or less intact. Which is mind-boggling. If Disney had produced this, audiences would be asking: Why is it so overwhelmingly white? Why wasn’t Tiger Lily’s role rethought or cut entirely?

And the most obvious response to all of this, naturally, is that “Peter Pan” isn’t meant for television, because it’s a play, and it’s not meant for modern audiences, because it was written in 1904. But then that leads to the most obvious question that struck me as I was watching last night: Why on earth would anyone make this show in 2014? As the fabulous and opinionated Tom and Lorenzo wrote this morning: "There’s a difference between 'old-fashioned entertainment' and 'offensive minstrel shows' and this falls somewhere in the middle."

We live in a world where a feminist retelling of the book of Genesis is a bestselling book and an upcoming miniseries on Lifetime. Where children’s fables are being unpacked and retold to include more female and minority perspectives. The “Hunger Games” franchise and the Marvel and DC universes are engaging with complex, dystopian themes in their storytelling. We are not shrinking violets in our American living rooms, and neither are our children, and yet this version of “Peter Pan” is like a time capsule from 1904, unwilling to do anything to disturb the fragile social norms of a bunch of long-dead white Brits.

NBC hewed with the standard set by Mary Martin in the ‘50s and went with Peter Pan being played by an adult woman, and a classically feminine-looking one at that. The result was a lot of hilarious queer subtext — hilarious not because a bunch of women in a love quadrangle is inherently funny, but because it was so obvious that NBC had no intention of creating that subtext. The plot has something to do with all women wanting sex from Peter while he calls them “Mother”; also hilarious, but also depressingly unintentional.

“Peter Pan Live!” was, to be fair, executed adequately. It’s competent, and not a lot more than that. Allison Williams didn’t make a mistake on live television, but didn’t exactly win the hearts of thousands, either. Christopher Walken seemed to understand how cheesy it was, and went for it with glee; he’s not exactly hamming it up, but he’s mincing up a storm during the dance numbers. The camerawork couldn’t quite decide if it was going to follow the actors around or sit back and watch them, the way an audience would; the tension between the two made for some seasickness. And all of the delightful shortcuts of theater — which require your willing suspension of disbelief in exchange for the thrill of watching players act out a story live, right in front of you — looked terrible on-screen, particularly if you happened to be watching in HD. (The comb Peter gives Wendy was tacky spray-painted plastic, and they knew it, and we knew they knew it.)

“Peter Pan Live!” was mediocre, bland and depressingly safe, and because Wal-Mart spent millions of dollars tying in advertising throughout the whole thing we’re likely to see dozens more musicals brought boringly to life around the holidays. I’m not looking forward to it. But Scrooges, fortunately, are comforted by all the great tweets.

Updated, 12/6/14: An earlier version of this post stated that "Peter Pan Live!"'s sound tracks were definitely not recorded live. There is no clear evidence one way or the other. The post has been updated to reflect the uncertainty.