Rowan has become one of "Scandal's" most interesting characters, in part because of what he reveals about Olivia 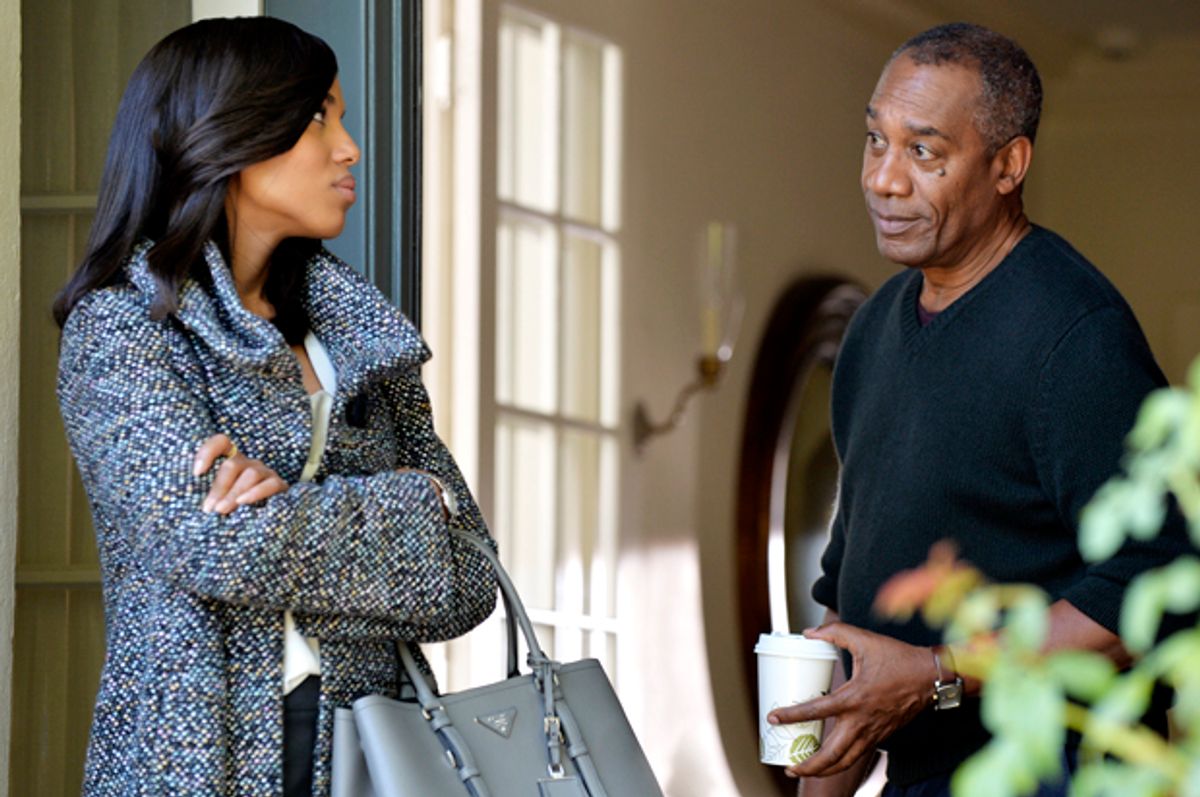 ABC’s "Scandal" recently wrapped up the first half of fourth season, and for the most part, Shonda Rhimes executed the Winter finale the way we’ve come to expect: She tied up the various subplots, or mini-scandals, together with the larger, looming scandal of near apocalyptic proportions that had been building since the end of September.

The draw of "Scandal" has always been its schizophrenic pacing and the elaborate, interconnected backstories of its dramatis personae. But what I'll miss most are the show’s power dynamics, all the political chess moves and the endless plot twists they produce. And since the beginning of Season 3, perhaps the most interesting dynamic has been between the show’s protagonist, Olivia Pope (Kerry Washington), a fearless Washington “fixer,” and her father, Rowan (Joe Morton), also known as Eli Pope, or “Command,” the sinister head of the Central Intelligence Agency’s clandestine spy division, B613.

When we first met Rowan, it was in the show’s second season (“Snakes in the Garden”), an episode in which he played a nameless mystery man — presumably a high-ranking government official — who seemed to possess extensive knowledge about the highly classified affairs of President Fitzgerald “Fitz” Grant and his inner circle. There was danger in his anonymity, something Rhimes certainly knew. She didn't formally introduce him until Season 3’s first episode.

In the episodes that followed, Rowan became more and more ingrained in the narrative. Rhimes began unraveling the family history between him and Olivia, flashing back five years earlier (“Guess Who’s Coming to Dinner”) to a time when the two would dine together every Sunday.  There is a normalcy to the small ritual of sharing a meal that feels antithetical to the crises and conflagrations of Olivia's Washington life. And this dinner had the effect, too, of adding a dark face into a monochromatic narrative. Rather than ignore racial dynamics completely, as had been suggested by critics and fans live-tweeting on Thursdays, Rhimes used the Rowan-Olivia relationship to coyly make it more visible.

Since those dinners, Rowan has helped us gain a more comprehensive understanding of Olivia. As he has navigated his dual roles as “Command” and as a father, Rowan has filled a number of blind spots in Olivia’s rearview while forcing us to ask more questions of her character. When it became clear Olivia’s mother, Maya Lewis (Khandi Alexander), wasn’t killed in a plane crash, we also learned that her faked death was orchestrated by Rowan, who ordered Fitz, then a young soldier, to gun down the plane. Further complicating matters, Maya, as it turns out, wasn’t simply a civilian, but a terrorist bent on selling CIA secrets to the highest bidder. Through Rowan we were then introduced to Captain Jake Ballard (Scott Foley), a B613 operative Rowan sent to seduce Olivia away from Fitz. Just as Rowan, the father, tested his daughter’s love and loyalty, Rowan, “Command,” was testing our understanding of his motives (his allegiance to “The Republic” or to his daughter).

The blurred lines of allegiance has been, in part, what has made Rowan’s presence feel at once so refreshing and so troubling. He’s sinister and unpredictable, the show’s caustic powerbroker, a man whose motives are always disguised. When he tells you he’s going right, he spins left. And vice versa. He’s "Scandal's" Joker. He can cut the deck at any time; yet we don’t know which way.

But it's not that Rowan refuses to take a side. He does so quite often — sometimes gracefully, other times using terror or extortion. He shows the same tactical precision exhibited by the agency that he oversees, B613. Politics, after all, is about straddling the line between power and promise, by using hope to conquer. So it is unsurprising that Rowan tiptoes between putting Olivia on a pedestal, calling her his “greatest treasure," and prioritizing the republic. Rowan chooses a side when it is opportune. Trying to guess his strategy is fun.

Olivia, despite her most valiant attempts, for the most part has failed to read her father as well. The uncertainty of who Rowan is, and what he is capable of, is a key source of suspense. The show also sneakily toys with parent-child power dynamics. In “Innocent Man," Olivia attempts to think like her father — she tried to beat him at his own game — in order to save Fitz from being manipulated by Rowan. But a few episodes later, in “The Last Supper,” we discover that Olivia’s calculations of her father’s chess moves were misguided. In the episode's final scene, Olivia attempts to dangle herself in front of her father like bait at the end of a reel, a plot to lure her father into a vulnerable position so he can be captured, inviting him to an upscale Washington, D.C., restaurant. Olivia mistakenly thinks, as children often do, that she can exploit his fatherly impulses -- that is, leverage them. But she miscalculates, and it turns out she doesn't know quite enough about him to manipulate him. Rowan out-maneuvers her, evading capture, a move that leaves a Navy Seal team dead and Olivia befuddled, returning the show to its chaos.

And then, in the finale, “Where the Sun Don’t Shine,” Olivia, Fitz and Jake conspire to dismantle B613 and hunt down Rowan. The most powerful scene occurs when Olivia walks into her safe haven, her apartment, only to find her father reminiscing over a Stevie Wonder album, “Songs in the Key of Life.” Rowan takes out a gun and tells her to sit down and have some respect. Then he does something telling: He places the gun on the table and walks away, almost inherently daring Olivia to make a move. She obliges, pulling the trigger. He screams. Of course, the gun wasn’t loaded. And had the chamber been loaded, the show would have felt like a letdown, a too-easy rejection of her roots, an easy path forward.

There is an implicit critique of the way we understand politics in the way Rhimes weaves Rowan and Olivia's stories together. We will only find Olivia when we find Rowan, and the future of the Republic somehow will depend on what happens to them going forward. What’s funny is that "Scandal," in all of its theatricality, mirrors what we know about life in the actual Washington: It is a place where the past can’t separate from the present, where today's "fix" becomes tomorrow's scandal, where relationships are convoluted and inexplicable, where power is frightening because it is so unpredictable and, as Rowan reminds us, it hides in plain sight.