America's vaping revolution: How suspicious should we really be of the e-cigarette craze?

A new tobacco alternative has taken the country by storm. But how safe is it, really? 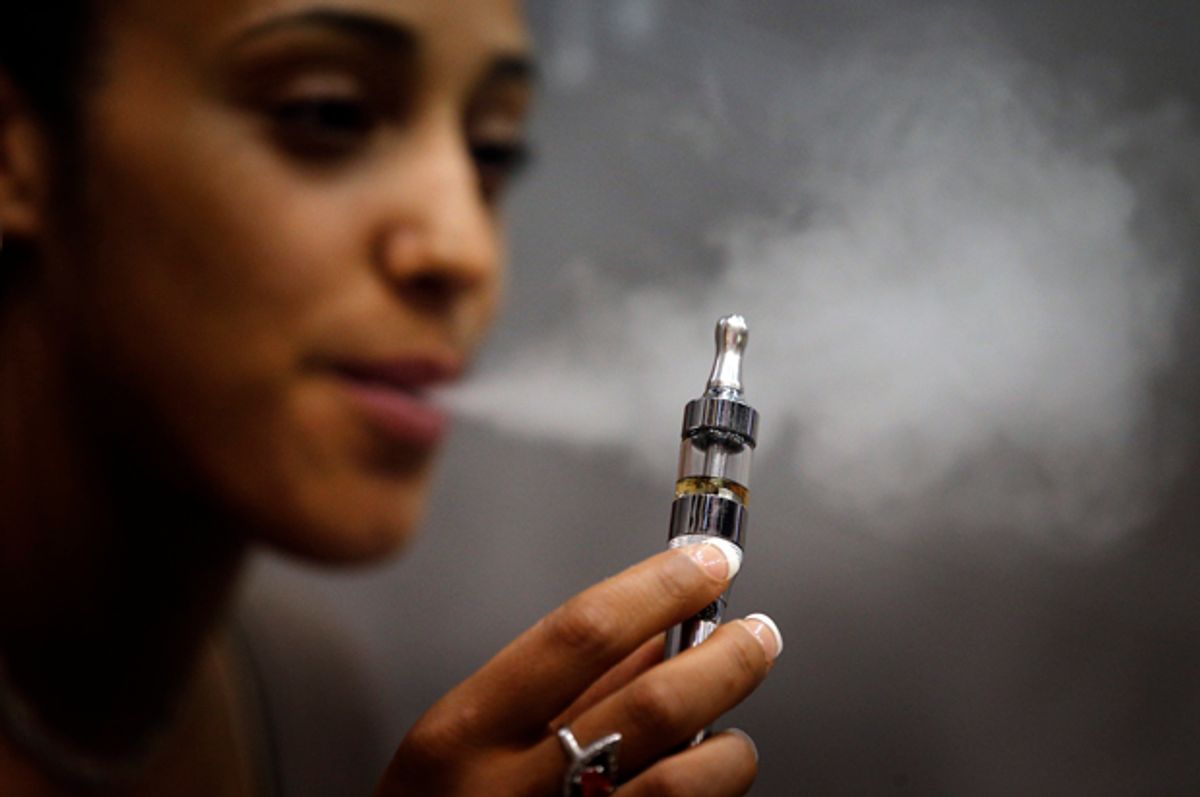 When the great comedian Bob Newhart performed his classic skit about Sir Walter Raleigh introducing tobacco to the civilized world, it brought to the fore just how ridiculous, viewed from a certain angle, civilization's long-standing love affair with the cash crop is. In it, Newhart plays Raleigh's old-world liaison, and incredulously lists the supposed uses for the leafy import:

It is pretty ridiculous when you think about the act of smoking a cigarette. Is it any odder, then, that the future of smoking appears to entail sticking a battery in your mouth that glows blue when you suck on it?

Humans have been inhaling smoke, voluntarily, for longer than you might think. In the Americas, shamans ground and rolled tobacco and hallucinogenic herbs since around 5,000 B.C., according to archaeological evidence in Peru and Ecuador. Cannabis was smoked in India, and is mentioned in ancient literature, like the Atharvaveda (written circa 1,200 B.C.). The Maya smoked as far back as the 10th century A.D. And, according to legend, the Aztec goddess Cihuacoatl was actually made of tobacco. A 16th century illuminated codex shows Aztec ladies with tobacco smoking tubes, which may make the Aztecs and Maya the originators of roll-your-owns, though we’ve thankfully set aside the human sacrifices in which tobacco once played a ritualistic role.

Europeans weren’t far behind. The fabled Oracle at Delphi was able to enter a trance, and thereby act as the mouthpiece for cryptic divine predictions, thanks to the Delphic shrine’s location over a fissure in the earth that released natural ethylene gas, which was trapped in a trough in the temple floor, to be released when a vision was called for — a sort of proto-bong. And the father of history, Herodotus, reports that the Scythians “howled with pleasure” when they inhaled fumes from burning hemp seeds. (Try that, Colorado!)

But it was not until the Conquistadors brought tobacco back to Europe as a cash crop that social smoking became common. From the 16th century on, pipe smoking and coffee shops (another new luxury imported from the New World) were quickly adapted as popular leisure activities among all ranks and classes. The Frenchman Jean Nicot first brought tobacco to France in 1560 (and his surname gave us the term "nicotine"). And, as per Bob Newhart’s comedy routine, Sir Walter Raleigh was credited with bringing both potatoes and tobacco to 16th century England. (Although history has shown that both were present before his return from Roanoke, Virginia.) The dashing figure he cut did, however, do much to promote tobacco among the dandies of the time.

From the ancient civilizations of the Andes to Elizabethan England, smoking has now morphed into a new digital revolution. Handwritten letters have been replaced by email, newspapers by tablet editions; and now, it seems, cigarettes, cigars, pipes and hookahs may give way to their e-equivalent.

Welcome to the world of electronic cigarettes, already a surprisingly large industry, considering that the technology is only a few years old. In the U.K., the number of e-cigarette smokers jumped from 700,000 in 2012 to 2.1 million in 2013. In 2014, Americans spent $2.2 billion on e-cigarettes — still a fraction of the $85 billion annual sales of tobacco products, but a good chunk of change nonetheless. First conceived and patented by American Herbert A. Gilbert in 1963, as a “smokeless, non-tobacco cigarette” that “replaced burning tobacco and paper with heated, moist, flavored air,” the product we now think of as an “electronic cigarette” was invented by Chinese pharmacist Hon Lik as recently as 2003. E-cigarettes incorporate a battery, a cartridge containing liquid nicotine, and a vaporizer that uses the battery’s energy to turn the liquid into vapor for you to inhale.

Electronic cigarettes, not being a tobacco product, are generally regulated in a different and far lighter way than traditional tobacco-based smokes. This is where debate has raged. Are they safer than real cigarettes? Are they a gateway for youngsters, drawn to the digital cool and easy taste of e-cigarettes, to later turn to real smoking? E-cigarettes are so new that they have hardly been studied. At first glance they seem a winning alternative with numerous advantages. But just last week a new study suggests that they may be far darker than they first claimed.

Proponents tout three ostensible advantages to e-cigarettes over the real thing: 1) You can smoke them anywhere, even indoors, even under a blanket without setting the house on fire; 2) they cost less than normal cigarettes in the long run — around half as much; and 3) they won’t kill you. Let’s consider each of these claims, and whether e-cigarettes are really as rosy as they seem.

1) You can smoke them anywhere.

Pro: You can indeed smoke e-cigs anywhere, bothering no one and without fear of stinking. However, quite a few cities have recently banned what has become known as “vaping” (as in, inhaling vapors) through no concrete scientific evidence that it is bad for secondhand inhalers, and despite the fact that there is no scent, noxious or otherwise, released. Americans, in particular, have just swung so far away from the '70s, smoking-is-cool vibe, that it seems that such bans are based on principle, not on problems.

Con: Until it is scientifically proven that secondhand e-cigarette smoke causes health issues, then you can, indeed, smoke them anywhere — at the discretion of the location in question. The World Health Organization released a warning this August that recommended governments prohibit the sale of e-cigarettes to minors and to ban their smoking in indoor spaces. France followed this advice, but other countries have yet to do so.

2) They cost less than normal cigarettes in the long run.

Pro: This is indeed the case: E-cigarettes cost about half as much as buying tobacco cigarette packs. A single vapor cartridge, which is roughly equivalent to one pack in terms of number of puffs (about 300), averages around $1.60, while a pack of real cigarettes is upward of $4 and can be over $7, depending on state tax.

Con: There really isn’t a con in this case. They certainly are cheaper than the real deal, and they also allow users to smoke more sparingly. A puff is only activated when the user inhales on the e-cigarette, so there is no need to smoke an entire cigarette’s worth at once. If you’re satisfied with just two puffs, you can set the e-cig down, meaning that you may also wind up smoking less, altogether.

Pro: At least there is no definitive scientific proof that they are harmful. Yet. The fact is that they are so new that it will likely take decades for definitive studies to determine the long-term effects of regular vaping. Vapor cartridges purport to be just nicotine, a vapor liquid (non-harmful propylene glycol and vegetable glycerine) and optional flavors. If this is so, then, in principle they should not be bad for you. Nicotine itself can raise your blood pressure, but is not a carcinogen cancer-causer — tar and the thousands of chemical additives in most real cigarettes are to blame for that.

Con: Slow down there, Tiger. Last Thursday, the Japanese Ministry of Health released the results of a study that suggests that, when the coil inside e-cigarette vaporizers gets overheated, elements of the vapor itself, which in some cases contain formaldehyde and acetaldehyde, release carcinogens that may exceed those in a traditional cigarette by 10 times! But studies such as this one are so new that they are not, as yet, definitive. When asked for comment on the study, two leading e-cigarette manufacturers refrained from comment because the study was so fresh that they hadn’t yet seen it and weren’t even sure if their product had been included. In April 2014, the U.S. Food and Drug Administration released a more noncommittal statement: “E-cigarettes have not yet been fully studied, so consumers currently don’t know: the potential risks of e-cigarettes when used as intended.” The combination of uncertainty and the small handful of studies published to date mean that e-cigarette use is a gamble. There’s just not enough information to say for sure whether they are bad for you, or rather just how bad they are for you, considering the initial argument that they are far less harmful than tobacco. It will likely be decades before one can say for certain because, so far, there are no users who have been vaping long enough to provide a representative, long-term study group.

Nomenclature aside, one thing is for sure: They can’t be good for you, so the question is what level of bad. Inhaling nicotine vapor alone should do no harm, beyond potentially raising blood pressure (and it’s not a good idea for pregnant ladies). The key question is whether the nicotine and vapor liquid really contain nothing harmful, or whether some e-cigarette companies allow carcinogens to slip in. The benefit of studies such as this new Japanese project is to raise suspicions, so that they will force this new industry to reckon with the possible health effects of its products. Better still would be for firms to make public independent analyses that clinically prove that their products contain no carcinogens. Pressure is needed to ensure that the undercontrolled world of e-cigarette production is monitored, with the hope being that, if vaping is not already as harmless as its proponents would like us to believe, then it can be made so, thanks to public demand.

Dr. Cobb describes how e-cigarette companies usually purchase nicotine from the same suppliers as the pharmaceutical industry. “The larger companies are basically just selling pharmaceutical nicotine, just packaging it in a different way.” Historically, nicotine replacement products work as a cessation aide, whether it’s a patch or gum or an inhaler. E-cigarettes could, in the future, function as such, but Dr. Cobb emphasizes, “only if they are regulated to the point where, if somebody goes out and buys one, they actually know that what they are buying is pharmaceutical-grade nicotine, and that the amount of nicotine in the device, and what it delivers, is what the manufacturers claim. Without regulation, you really have no idea what you’re going to get.” Some companies, like the current industry leader, Blu, have stated that their product “has strict quality control standards; we maintain an independent party to inspect productions lots for quality control,” which sounds good, but is too general to assuage fears.

Doctors like Nathan Cobb are optimistic that e-cigarettes could become a smoking cessation aid, and that the key to making them a safer alternative to cigarettes is in tight restrictions. “I think that our hope, in the public health community, has always been, rather than tightening restrictions on clean nicotine products, that we would let those be easier to get into the hands of smokers while tightening the screws on Big Tobacco …” The real question is whether your e-cigarette contains “clean,” pharmaceutical-grade nicotine and nothing else that might be harmful, particularly carcinogens. The latest Japanese study suggests that many e-cigarette firms are not offering as clean a product as advertised. But recent regulations, like those from the FDA, should encourage, and indeed require, firms to make their e-cigarettes as clean and relatively “harmless” as possible, which would make them a safer option than combustible tobacco products. After all, isn’t it in the interest of any big business to keep their regular customers alive and buying for as long as possible?