Liberals looking to assign blame for our growing police militarization need to take a long, hard look in the mirror 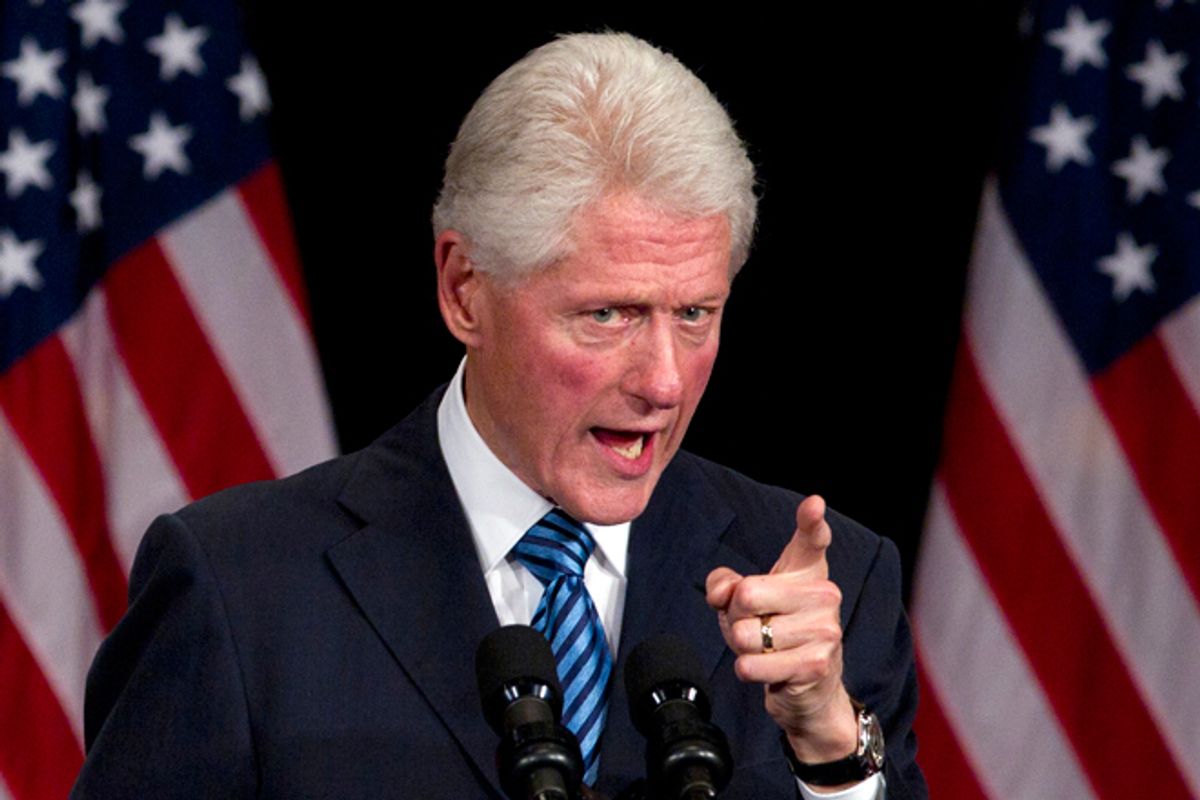 The 200 protesters arrested last night in New York City and others being arrested elsewhere in demonstrations against police brutality are confronting a police and prison system that has put more people behind bars than any other country. Some have pointed out that those doing the arresting are not exactly far-right Replublican and conservative-led jurisdictions, but solidly Democratic strongholds. Cities like New York City, where Eric Garner was tragically killed – are run by the Democratic Party from top to bottom, with one of the countriy's most progressive mayors, Bill De Blasio at the helm. Given that the party is, at least, traditionally associated with liberalism, civil rights and a more permissive society, some observers find that ironic. But the recent past tells us that the Democratic Party in the past three decades has abandoned concerns for civil liberties and civil rights in the pursuit of appearing to be just as tough on crime as their Republican counterparts.

This is a story that begins when Bill Clinton embraced the law-and-order policies of his Republican predecessors. Let's review:

Clinton: The New Democrat With An Old Approach To Crime

First some background: The first president to declare a “War On Drugs” was a Republican, Richard Nixon. Nixon began a heavily police-focused drug policy, which was then escalated by Republican Ronald Reagan, who made his wife Nancy the face of “Just Say No” – a more innocuous phrase that was accompanied by a ramping up of prisons and policing.

During this period, many Democrats resisted these policies, considering them to be conflicting with the civil rights coalition they had absorbed into their party since the 1960's. The big change came when President Bill Clinton came into office.

Clinton was a “New Democrat” – part of a new coalition of Democrats who believed that the liberalism represented by the New Deal and Great Society had run its course, and that Democrats must court Big Business and certain right-wing interest groups in order to forge a new party.

Included in this policy shift were things like “welfare reform,” the North American Free Trade Agreement, and deregulation of the telecommunications and banking industries. But perhaps Clinton's earliest and most intense shifting of traditional Democratic Party liberalism was with respect to crime. This took the form of the 1994 Violent Crime Control and Law Enforcement Act (later commonly known as the crime bill). To helm its passage, Clinton tapped none other than our current vice president, then Senator Joe Biden of Delaware.

Biden was the chief author of the 1994 crime bill, which vastly increased the number of police officers on American streets, eliminated Pell Grants for prisoners, expanded the federal death penalty and upped the Border Patrol presence (recall that this bill was passed around the same time as NAFTA, which increased migration from Mexico).

The bill was passed in a political climate of hysteria about crime and Biden and Clinton used that climate to their advantage. Recall that during the earlier 1992 presidential campaign, Clinton himself flew back to Arkansas during the presidential campaign to ensure a mentally ill black man was executed. Following the execution, Clinton said, “I can be nicked a lot, but no one can say I'm soft on crime.”

That was a sentiment Biden and congressional Democrats also sought to project. During the debate over the 1994 bill, then-Rep. Mel Watt (D-NC) introduced an amendment to eliminate death penalty provisions for drug kingpin crimes where no death occurred. Most Democrats voted against the amendment, and it went down in flames. In 1996, Biden joked that “someone asleep for the last 20 years might wake up and think Republicans were representing Abbie Hoffman and Democrats were representing J. Edgar Hoover.”

The death penalty alone was huge for the Democratic Party's image projection; Clinton's Attorney General nominee, Janet Reno, boasted of “regularly” seeking the death penalty as Dade County state attorney. The Department of Justice boosted its defendants submitted for death penalty review from 47 (1988-1994) to 682 between 1995 and 2000.

A small group of progressive Democrats, mostly African Americans, requested that federal death penalty legislation include the Racial Justice Act (RJA), which sought to allow those convicted of the death penalty to use statistical data to support allegations of racial discrimination.

The Clinton White House was silent on the RJA, and it didn't make it into 1994 death penalty legislation. A memo later released to the public revealed why. As author Naomi Murakawa notes in her book The First Civil Right: How Liberals Built Prison America, a White House document titled “Draft Q&A/Racial Justice Act” wrote “[President gives his statement on the urgency of the crime bill. No mention of RJA.] If the administration were to be asked about the RJA, it would reply that Clinton's initiative was to “pass the bill and get those cops out on the streets,” whether there was an RJA included or not.

Thus, the prison population saw a dramatic increase under the Clinton administration, with the support of most Congressional Democrats (and of course most Republicans, who continued to egg on the Democrats to go even further to the right). Here's what the prison population boom looked like, illustrated by the Center for Budget and Policy Priorities: The crime legislation of the 1990's didn't just put more cops on the streets and build more prisons, it also made sure those cops were armed to the teeth. Throughout the 90's, there was an expansion of Community Oriented Policing Services (COPS) and Byrne grants, which financed local police departments to wage a heavy-handed drug war (both programs increased under President Obama).

This past June, progressive House Rep. Alan Grayson (D-FL) introduced an amendment to the defense appropriations bill that would block the “transfer” of “aircraft (including unmanned aerial vehicles), armored vehicles, grenade launchers, silencers, toxicological agents, launch vehicles, guided missiles, ballistic missiles” from the Department of Defense to state and local police forces. The amendment received the support of only 62 Members, and those voting against it included Rep. William Lacy Clay (D-MO), who represents Ferguson, and every senior member of Democratic Party leadership including Reps. Nancy Pelosi (CA), Steny Hoyer (MD), and James Clyburn (SC).

These Democrats (and Republicans, most of whom joined them) were courted by police unions such as the National Fraternal Order of Police and by weapons manufacturers who develop the Pentagon armaments that are now finding their way to the police.

Can The Democrats – And Republicans -- Shift Back Towards Crime Sanity?

Despite all this, there is evidence that we are starting to see a real shift – driven by increasing hostility to the police state by Americans of all political ideologies – by both the Democrats and Republicans towards less militarization of the police and less authoritarian crime policy.

None other than Bill Clinton, the man who oversaw the largest expansion of the federal death penalty in history, admitted as much. “We basically took a shotgun to a problem that needed a .22 – a very significant percentage of serious crimes in this country are committed by a very small number” of criminals, he told an audience in October. We took a shotgun to it and just sent everybody to jail for too long. “I think in this next step where we’re going to be apparently debating all this and as the presidential election approaches, we’ll start to have a discussion of all of this,” he continued, pointing to Republican support for reducing prison time, particularly among the religious wing of the party.”

Many of the Members who voted against Grayson's amendment, prodded by thousands of protesters in the streets, are now calling for oversight of police militarization. Clay now says he's “alarmed” by the way Ferguson's police are armed; the President has pledged to fund a new program to make 50,000 body cameras available for police to wear to reduce incidents of brutality, although many commentators have observed that having his death by chokehold videotaped did not help Eric Garner or his family get much justice.

On the other side of the aisle, the Republicans who goaded the Democrats into becoming the new party of crime authoritarianism, are starting to shift as well. A number of Republican governors have embarked on ambitious criminal justice reform programs, lowering their prison populations. Likely 2016 presidential candidate Sen. Rand Paul (R-KY) has been outspokenabout police brutality, and has gone further than any leading Democrats in calling for an absolute end to the War On Drugs.

None of this is to say that these Democrats or Republicans who have flip-flopped and are now calling for reforms are in any way sincere in their convictions. Who is to say that Bill Clinton was more honest when talking about executing the mentally ill than he is about reducing the prison population today?

But politicians are fundamentally opportunistic, and the fact they are talking about rolling back decades of harsh policies is a testament to the hard work activists are doing across the country, and to the sacrifices of men like Eric Garner who lost their lives, and, in the process, showed us why today's prison and police state is a failure and why both the Democrats and Republicans must change course.