Post-Ferguson and Staten Island, conservatives are trying to divide with the snob card again. Too bad Dems let them 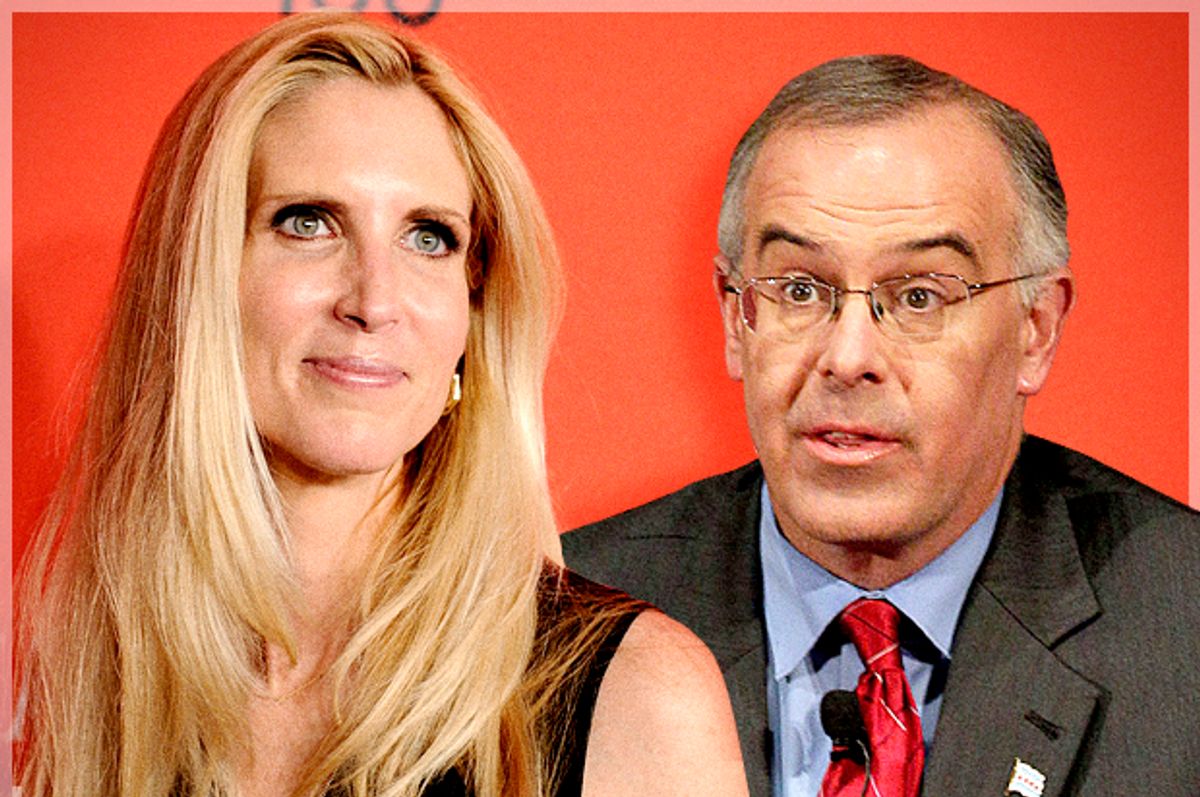 A few days ago, New York Times columnist David Brooks took the occasion of the outrage in Ferguson, Missouri, to call for a national effort to combat “classism,” an unfortunate form of prejudice that, he says, results from widening inequality. Nowadays, Brooks asserted, “classism intertwines with racism” to produce a truly monstrous complex of attitudes toward the people at society’s bottom.

If you are a newcomer to the culture-war labyrinth, you might be surprised to hear a leading conservative deplore “classism,” because it’s the right’s beloved free-market system that has opened the yawning crevasse between the classes—between the people who work and the people who own. But in truth class grievance is central to the cosmology of modern conservatism. They love nothing more than to denounce snobbery—just as long as they are able to attribute that vice to scholarly liberal weaklings who disdain the plainspoken ways of middle America. David Brooks himself wrote one of the best-known iterations of this stereotype, back in the days when people were just beginning to associate red states with proletarian authenticity and blue states with upper-class pretension. (And back in October, he argued against the scourge of "partyism".)

When Brooks skewers the tastes of the liberal professional class, he often does it in a self-effacing way. He presents himself as one of them, a liberal manqué, and his message to red-state America is: You’re right to distrust them/us. But consider the right-wing classism critique as it has been enunciated by a very different writer, in a 2003 book that is probably best forgotten:

The writer here is Ann Coulter, and though it may seem unfair to associate her poisonous prose with the thoughtful stylings of David Brooks, I do so for a reason. She and he are on the same political team, roughly speaking, and if you can make your way through the smoke and the shrill, you can see the conservative mind beginning to change.

The critical line in the Coulter passage above is about the way liberals “embrace criminals.” After each incident of outrageous police brutality of the last few decades, liberals have generally sympathized with the victim, while conservatives have reached for the law-and-order megaphone, closing ranks with the police and even presenting them as blue-collar heroes. This goes back at least to the Kerner Commission, which was appointed to investigate the urban riots of the 1960s (it famously found that police forces were often seen by black residents as an occupying force) but which wound up being used to stoke the white backlash. Since then, race vs. class has become the insane script for everything from the Henry Louis Gates controversy back in 2009 through the shooting of Trayvon Martin and even the recent events in Ferguson.

The twist Brooks is putting on this narrative is something new. He doesn’t even mention liberals in the article. “Today we once again have a sharp social divide between people who live in the ‘respectable’ meritocracy and those who live beyond it,” he writes.

“People in the ‘respectable’ class have meritocratic virtues: executive function, grit, a capacity for delayed gratification. The view about those in the untouchable world is that they are short on these things. They are disorganized. They are violent and scary. This belief has some grains of truth because of childhood trauma, the stress of poverty and other things. But this view metastasizes into a vicious, intellectually lazy stereotype. Before long, animalistic imagery is used to describe these human beings.”

Brooks gives us no examples of some “respectable” someone indulging in such a stereotype, so it’s difficult to understand who he has in mind or what political effects he wants his accusation to have. But he is certainly expanding the familiar right-wing class grievance in a remarkable way. Now it’s not merely the police whom professional-class snobs don’t understand, but their victims as well. We privileged folks can blog as earnestly as we want, but thanks to the class divide, we still don’t really know what life is like in Ferguson, Missouri, or Cleveland, Ohio, or even in certain reaches of New York City.

Perhaps Brooks was moved to write this as an act of conscience. Maybe he’s noticed that toxicity has taken over in the GOP. Perhaps he’s realized that the decades-long conservative project of highlighting the pathologies of the “underclass” has been little more than an excuse for doing nothing at all to address racial grievances.

Or perhaps he has a different goal in mind. Read between his lines, as we Kremlinologists who analyze the American right like to do, and it is possible to see an entirely new backlash campaign beginning here, one in which working-class people of all races are urged to join the revolt against arrogant, professional-class liberalism. I admit, this seems improbable, but so did the rise of the Reagan Democrats.

The worst aspect of conservatives’ gripes about classism are the solutions they propose. Never do they suggest that we actually do something to mitigate the extreme imbalance of power between the social orders, because that would change them from compassionate conservatives into dirty commies. The farthest they usually go in this regard is to recommend that we vote for a candidate who shares our values, a guy with whom we can imagine chugging a can of beer while we’re both cleaning our rifles or talking about soybean yield or getting our hair cut in some really authentic small-town barbershop from back before the big-box stores killed small towns.

David Brooks is a daring writer, however, and he pushes it to the limit: We need a “common project,” he declares, in which Americans from different classes can come together to do something jointly and thus learn to understand one another. Such an undertaking, which sounds a lot like one of those team-building exercises that are always suggested by management consultants, would “improve social mobility” so that “social distance will decline.”

Yea, verily: When the venture capitalist shall dwell with the checkout clerk, and the payday lender will lie down with the coal miner, then brotherly concord will prevail at last.

The truth is, though, we already have a common project between the classes—it’s the economy. Technically speaking, the highly educated professional class does know how the other half lives, because they tell the other half how to live. They set their wages and hours. They make suggestions of what to eat and drive and squeeze onto their toothbrushes. They instruct them how to do their jobs—and they even offer friendly advice for how to rationalize it when those jobs get shipped to Mexico or China.

Now, there is something that would change this ugly class situation, and it’s not a society-wide project in which bosses and bossed come together for a series of exciting trust falls. It’s the opposite: An organization of workers that allows them to confront members of the other class and negotiate with them over wages, hours and the other things that actually determine the conditions of their lives.

Unfortunately, such organizations strike most conservatives as a perversion of the natural order. Try to set one up where you work and within minutes David Brooks’s tasteful fans in the C-suite would be on the phone to the Ferguson PD imploring them to show up in full combat mode and make you stop. But let workers form unions and it would actually do something huge and immediate to close the crevasse of inequality, increase mobility, and maybe put a big dent in racism and police brutality along the way.

No empathy from on high required. Do something about class itself, and the rich can keep their “classism.” Snobbery without power behind it is not deadly but merely amusing, a joke from a Monty Python skit long ago.

Now, let me reverse course. Considered from a different perspective, there is a lot of merit to David Brooks’ idea for an effort in which wealthy professionals learn to understand those beneath them. Class is one of the most misunderstood categories of them all, subject to all manner of bad faith rhetoric and deliberate misrepresentations, and we could desperately use a “project” to help us sort things out.

By “we,” I mean the Democratic Party. Once upon a time it was the dedicated champion of the interests of average people, but today Democrats are hemorrhaging the votes of the white working class. This catastrophic development is the pundit subject du jour, replacing the happy tales of demographic inevitability of two years ago. Since the beginning of September, according to Lexis-Nexis, there have been no fewer than 46 newspaper stories predicting, describing and analyzing the evaporation of Democratic appeal among this enormous slice of the electorate.

This is not merely disastrous, it is pathetic. What kind of lamestain left can’t win the working class . . . in year seven of a crushing demonstration of the folly of free markets? What kind of political leadership can’t figure out a way to overcome the backlash sensibility after four decades?

I know, I know, this is a complicated, long-running subject, and I’ve burned hundreds of pages writing about it already. But still.

When Democrats finally get over the impulse to deny and prevaricate and blame others, and instead ask where they themselves went wrong, one place they might begin is their beloved issue of free trade. Take NAFTA, the granddaddy of all trade agreements, whose twentieth anniversary we celebrated this year: There has never been a more obviously class-based piece of legislation. It was supported with uncanny unanimity by members of the commentariat and the professional class, and, indeed, it has worked well for such people. For members of the working class, however, it has been precisely the disaster their organizations predicted.

The deal crushed enthusiasm for the Democratic Party among the working-class voters who were then considered part of the Democratic base and contributed to the Democrats’ loss of the House of Representatives in 1994, a disaster from which, the economist Jeff Faux wrote in 2006, “the Democratic Party still has not recovered.” And, indeed, from which the party seemingly has no desire to recover. Just the other day, President Obama announced that he is fired up and ready to go . . . with the Republicans in Congress on the Trans Pacific Partnership, even though much of his own party is opposed to it.

Democrats who sign up for our master class on classism might also look back over their response to the financial crisis, during which they bailed out their BFFs on Wall Street and let everyone else go to hell. Or the many favors they failed to do for their former BFFs in organized labor. Or their lack of interest in getting a public option included in health-care reform.

You get the idea. The list is long. The important matter for Democrats is admitting they have a problem—that these have been a lousy series of decades for working people and that Democrats deserve a large part of the blame for it. Nothing can change until they first accept responsibility for what they have done.