When the cops start filming: What makes police accountability in the age of Michael Brown?

Can body cameras fix relations between police and communities? Or are they just an expensive way to pass the buck? 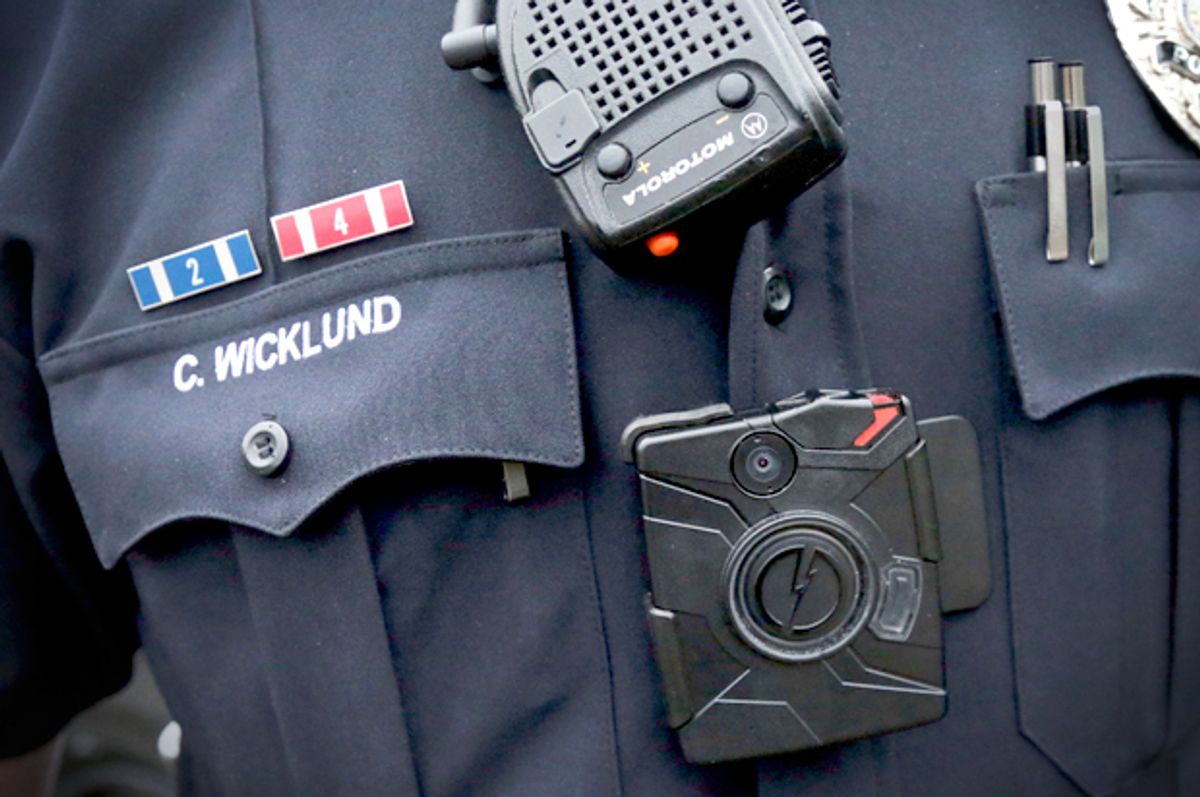 On Monday, a week after a St. Louis County grand jury declined to press charges against Ferguson police officer Darren Wilson for the killing of Michael Brown, President Obama announced an initiative intended to mend the “simmering distrust” between police and minority communities: a $75 million investment in body cameras for officers.

It was a fitting political response to a case that hinged on the wildly conflicting reports of eyewitnesses. Michael Brown’s parents had already made body cameras their cause. But in a moment, the president elevated the concept from a progressive talking point to a national experiment.

Even if (when) Congress denies his request, his endorsement is loud and the shift is underway. Perhaps a dozen cities have purchased wearable cameras for their police forces; dozens more will follow. Many in the law enforcement community feel their adoption is inevitable. Supporters hope the cameras will bring decorum, respect and accountability to interactions between cops and civilians.

And yet, the technology lacks rigorous evaluation. Can police body cameras fix relations between officers and black communities? Or are they merely an expensive way for politicians to avoid confronting deeper, thornier problems, like racial bias, institutional malfeasance, and an American populace teeming with deadly weapons?

Video is powerful. Thanks to grainy surveillance footage of the death of 12-year-old Tamir Rice, who was shot by a policeman in Cleveland, we know there are discrepancies between the initial police statements and the events that transpired.

Footage couldn’t get an indictment for the cop who appeared to suffocate Staten Island father Eric Garner during his arrest in July. But it was largely thanks to two heartbreaking videos, recorded by a bystander, that Garner’s death became national news; that his treatment by the NYPD was denounced by the state’s junior senator, Kirsten Gillibrand; that House Majority Leader John Boehner said his death left “a lot of unanswered questions”; and that Cathy McMorris Rodgers, chairwoman of the House Republican Conference, said the House should “absolutely” hold hearings on the subject.

That body cams provide evidence, however, is a function of last resort. The primary hope is that their presence alone will discourage bad behavior in the first place (from officers and citizens alike), resulting in fewer confrontations. It’s typically thought of as a tool of civilian control over police, but that’s not necessarily so. In Plymouth, England, a voluntary camera program pitched the benefits to cops: protection from false accusations, more guilty pleas, less disrespectful behavior. In Fort Worth, the police chief has said body cameras saved two officers’ jobs. Footage of well or poorly handled situations can then be used to train rookie cops or reviewed for practice.

A report published earlier this year by the Department of Justice highlights the technology’s potential. In Rialto, California, citizen complaints fell 88 percent after the introduction of body cameras. Use of force fell 60 percent. Shifts during which officers used cameras had half as many incidents of force as those during which their behavior went unrecorded. In Mesa, Arizona, cops with cameras received 65 percent fewer citizen complaints.

There’s a lot of ambiguity behind those positive results. Do cameras improve the behavior of the police or of the civilians they meet? It’s not clear. There are only five completed studies of the issue, two with no control group and another two conducted internally by the department in question.

Concerns about body cams fall into two categories. One school of thought holds that the technology could disrupt officers' ability to do their jobs. Permanent surveillance would place a burden on any employee. For cops, one of whose responsibilities is ostensibly to cultivate friendly and informal relationships in the community, a camera could cool interactions with witnesses, sources and allies.

But given that police officers in the nation’s 100-odd largest cities killed at least 1,800 people between 2007 and 2012, many feel we can no longer give the police that kind of leeway.

The other concern is over surveillance and privacy. The American Civil Liberties Union has called body cameras a potential win-win. “Although we generally take a dim view of the proliferation of surveillance cameras in American life,” ACLU senior policy analyst Jay Stanley wrote last year, “police on-body cameras are different because of their potential to serve as a check against the abuse of power by police officers.”

A frequent analogy is made to dashboard cameras, and it’s true that in many respects the transition toward body cameras mirrors the widespread adoption of dash cams two decades ago. Body cameras, however, will produce an exponentially greater quantity of footage.

How much? Unlike with dash cams, which can be activated by the car’s siren, there’s not a firm standard for when police are required to record, and what will happen if they don't. A policeman from the notoriously abusive department of Albuquerque, New Mexico, was fired this week for not activating his camera when he shot and killed a 19-year-old woman in April. Going forward, a lack of footage could be an ipso facto liability for an officer in front of a jury. Scott Greenfield calls this doctrine “the missing video presumption.”

Whatever the protocol, Obama’s 50,000 cameras would likely produce more than a million hours of footage a week: it’s the equivalent of recording all the activity of the entire police forces of Chicago, Los Angeles, Philadelphia, Houston, Washington, D.C., Baltimore, Detroit and Las Vegas. (Those are the nine biggest municipal police forces in the country after New York City, which has nearly 35,000 officers.)

What happens to that footage? Where is it stored? Can it be viewed or made public by the police, by the subject of an arrest, or by a bystander? Is it subject to a Freedom of Information Request by a journalist, or a public disclosure request by a citizen? Do different standards apply to police interactions that take place inside private homes or businesses?

No one really knows the answers. More broadly, we can be sure of two things.

First, the footage will become a valuable tool of law enforcement. Coupled with software that reads license plates and recognizes faces, the addition of thousands of cameras to the streets will offer a portrayal of movement in the city in unprecedented detail. This is no longer hypothetical: In Oakland, police plan to review body cam footage of last week’s Ferguson protests and make subsequent arrests. In Calgary, where all front-line officers will wear body cameras by the end of this year, the police will search body cam footage for mug shots.

Second, the footage will be abused. That abuse could take the form of police practice that’s totally illegal and has nothing to do with solving or preventing crime. Or the footage could fuel police projects that, like the New York Police Department’s Muslim Surveillance operation, occupy dubious legal and ethical ground.

In an article on the state of the police in the American city, Los Angeles Chief of Police William H. Parker once wrote that the police force dwelt in its own long shadow. “The police function is rarely considered by the members of the electorate to be a vital element of their life together,” Parker explained. “Further, its past operation is one of alternating inefficient, corruption and brutality. As a result, the individual police officer operates with a remarkable lack of public support, co-operation, or trust.”

That was in 1954. But it seems relevant today, because the problem is still one of trust. New technology doesn’t change that, it just shifts the focus.