Rand Paul's "anti-torture" sham: Why his ignoring CIA scandal says so much

GOP celebrity senator loves to talk about the dangers of big government. So why's he been so quiet about the CIA? 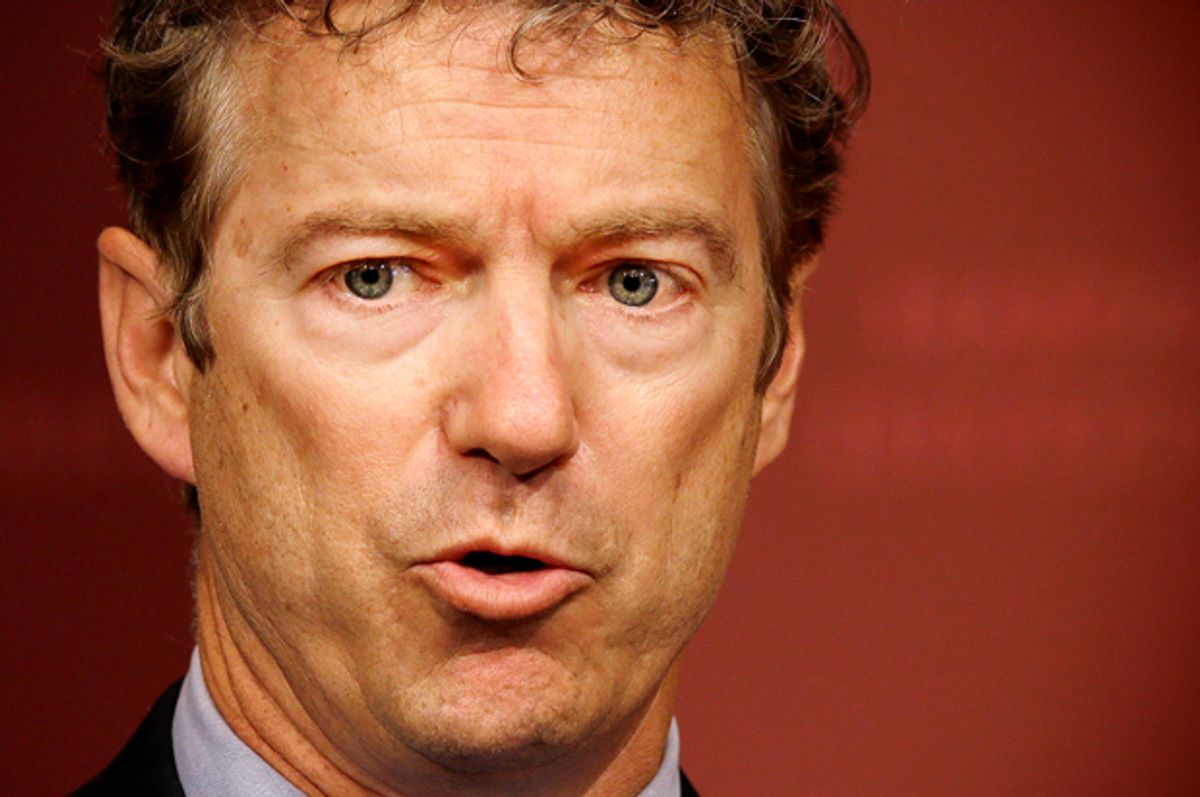 Say what you will about Rand Paul, but you’ve got to give the Kentucky senator at least this much: He knows how to stay on-message. Whether the issue is the death of Michael Brown, the killing of Eric Garner or the 2012 attack on the U.S. mission in Benghazi, Sen. Paul is always sure to bring the conversation back to his anti-government comfort zone, where every problem is the fault of unaccountable bureaucrats and politicians. Admittedly, Paul’s single-mindedness can become tiresome. But in the pseudo-libertarian’s defense, our era of widespread institutional failure offers him plenty of legitimate targets.

Yet in spite of his ability to turn any major story into an opportunity to rail against big brother, Paul’s been strangely uninvolved in a debate that seems almost tailor-made for his interests. As the New York Times reported on Monday, after years of negotiations between the White House and the Senate, many expect the executive summary of the Senate’s so-called torture report to be released at any moment. Involving as it does a government agency shrouded in secrecy, accountable to no one and willing to break laws — and bodies — to get what it wants, you’d expect Paul to be all over the torture report story. In truth, sadly, he’s hardly said a peep.

Before we get into the erratic nature of Paul’s attacks on big government, though, let’s turn back to that aforementioned piece in the Times, which stands as one of the most disturbing recent chapters of the entire CIA/torture saga. Written by the impeccably sourced Peter Baker, the article is actually more about how some of the people most responsible for the CIA’s torture regime are bracing for the executive summary’s release than it is about the report itself. Conspicuously absent from the piece are former Vice President Dick Cheney and David Addington, his consiglieri, who are generally considered to be the masterminds behind the intensely secretive program. But besides them, most of the key players in the torture scandal are here.

Unsurprisingly, none of the folks Baker spoke with seem remorseful, despite the fact that torture is not only morally abhorrent but also of little use when it comes to gathering reliable intelligence. Bush’s devotion to torture is so stubborn, he reportedly won’t seize the chance to distance himself from the practice the authors of the Senate summary offer by reportedly claiming he was misled. “Some former administration officials privately encouraged [Bush] and his top advisers to use the report to disclaim responsibility for the interrogation program on the grounds that they were not kept fully informed,” Baker reports. But Bush and company aren’t having it, apparently because they feel such distancing would be tantamount to “throw[ing] the CIA to the wolves.”

Indeed, throughout the article, the former president and his advisors’ unwillingness to apologize for torture is framed around a self-serving and perverted sense of honor. Yes, the CIA may have broken American, international and human rights law in order to subject prisoners to hour after hour after hour of stress-positions and waterboarding, the argument goes, but they did so because their bosses wanted it and because they loved their country so damn much. “We’re fortunate to have men and women who work hard at the C.I.A. serving on our behalf,” Bush recently said in an interview with CNN. “These are patriots,” Bush added, “and whatever the report says, if it diminishes their contributions to our country, it is way off base.” This appears to be the position other members of the Bush circle: “[N]obody in our administration is going to throw the C.I.A. over the side on this” is how Baker quotes another unnamed source.

But while we should fully expect Bush and his partners to go to their graves defending themselves for promoting “enhanced interrogation,” part of what makes the Times article so unnerving are the hints that the current White House feels the same way. In fact, according to Baker, it wasn’t the Senate Intelligence Committee itself that gave the torture supporters of the previous administration access to the summary — and thus a chance to get their P.R. ducks in a row for when it’s released. The decision came from the Obama White House, which incidentally has been accused of trying to slow-walk the report to death on behalf of the CIA. For all their many differences, it seems, protecting CIA torturers is one policy area where Bush and Obama agree. (I guess Springsteen’s “We Take Care of Our Own” was a favorite of Obama’s reelection campaign for a reason.)

So let’s get back to Rand Paul. If you take a step back and look at the story of the torture report in its entirety, it sure looks a whole lot like Sen. Paul’s depiction of big government run amok. Not only does it involve the government disappearing people in completely secretive circumstances, but it also involves the state violating one of the most fundamental human rights, the right to be in control of your own body; to be a human being instead of the property of state. Moreover, the torture story is also about how government officials, given enough power, will work harder to protect themselves than they will to protect the public interest. In some sense, it fits one of the favorite tropes of anti-government ideologues like Paul — the idea of government abusing its power for the people’s own good.

Put simply, if Sen. Paul’s commitment to his small government vision extended beyond the GOP’s usual hatred of taxes, throwing himself into the CIA torture scandal by vocally and repeatedly demanding the summary’s release would be the perfect way to prove it. If Paul’s libertarian rhetoric is just a branding exercise to separate him from the rest of the 2016 presidential pack, however, then going after the “patriots” who tortured “evildoers” for George W. Bush is not in his best interest.

To my mind, the fact that Paul has still not offered anything of value regarding the CIA and torture (besides one quick both-sides mention from before he was elected) may not say it all. But it’s more than enough.