When Bey and Jay Z met William and Kate: How the US vs. UK media reacted 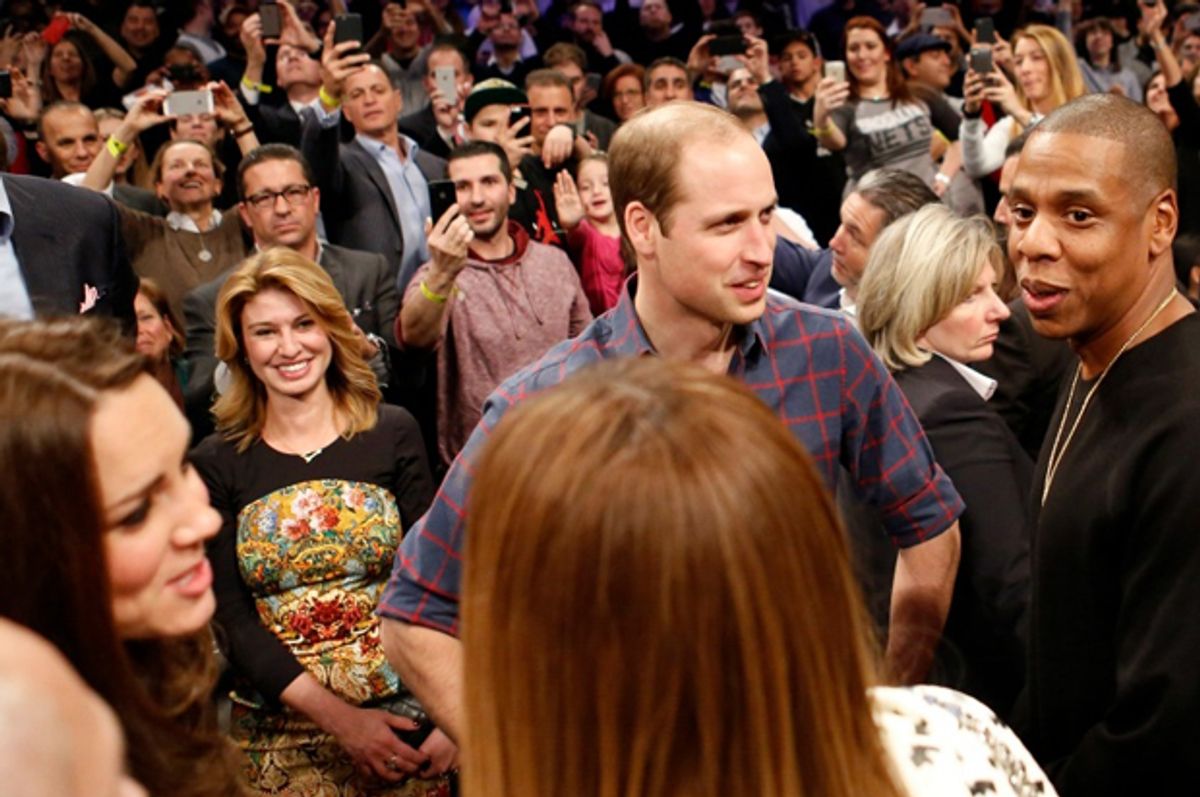 Last night, visiting royal couple William and Kate met Jay Z and Beyoncé at the Nets-Cavaliers game at Barclays Center, and everyone freaked out, naturally. But while the media and twitterverse are always happy to engage in some Royal Baby excitement or K-Mid outfit scrutiny, people seemed far less excited about the arrival of the Duke and Duchess in NYC than about the fact that they had crossed paths with our very own Brooklyn-based royals. "Kingdoms united at the Barclays Center on Monday night,” proclaimed the Daily News. "On Monday night, there were two queens in the house,” announced Huffington Post, while the New York Post wrote that “Queen Bey hail[ed] Will and Kate.” We in the States are used to the deification of Bey and Jay, but did the event carry the same world historical significance to our colleagues across the pond? We investigate:

The Independent seemed to think the prince wasn't playing it cool enough:

"Prince William looked a little star-struck as he chatted to Jay Z and is known to be a fan of R&B and rap music. Twitter could not decide who was more regal."

While the Guardian was more excited about “King” LeBron James that Queen Bey (also, about William’s Brooklyn-esque attire):

"William and Kate were feted at the Barclays Center in Brooklyn where they watched LeBron “King” James carry the Cleveland Cavaliers to victory against theBrooklyn Nets. The royals also shook hands with Beyoncé and Jay Z. Prince William, second in line to the British throne, channeled his inner Brooklyn hipster, sporting a blue and red plaid shirt, while Kate mastered courtside chic in a grey coat by American designer Tory Burch, skinny jeans and heels."

"The evening crescendoed with the long-speculated meeting between Beyonce and Jay Z and Kate and William midway through the third quarter. They shook hands and appeared to exchange pleasantries while fans shoved their phones in the air trying to capture the moment."

The Express took a hard pro-Royals stance, saying "there was no mistaking who had seniority."

"In a carefully choreographed few moments during a break in play at a basketball game in Brooklyn, William and Kate met rapper Jay Z and his singing superstar wife Beyoncé, who is nicknamed Queen B. It was a deliberate attempt by the royal couple to pay homage to American cultural icons, although even on the musical duo’s home turf – both are regular fans of the Brooklyn Nets, who were hosting the Cleveland Cavaliers - there was no mistaking who had seniority."

The Daily Mail, on the other hand, accorded Bey and Jay the respect they deserve:

"Having met with the President and a possible future president of the United States on the first leg of their American visit, it seemed only fitting that they should finish the day by rubbing shoulders with pop royalty."

While The Mirror knows exactly who run the world:

"The Duke and Duchess of Cambridge met the King and Queen of Brooklyn last night at an NBA basketball game."

"The 18,000-strong crowd erupted into cheers as the Duke and Duchess appeared court side just after half time. But they saved their loudest cheer for when Jay Z and Beyonce crossed the court for a chat with the royal couple."