"A $180 million ego bath": All the Hollywood stereotypes the leaked Sony emails confirm

From begging to threats and trash-talking, this exchange is something straight out of "Swimming With Sharks" 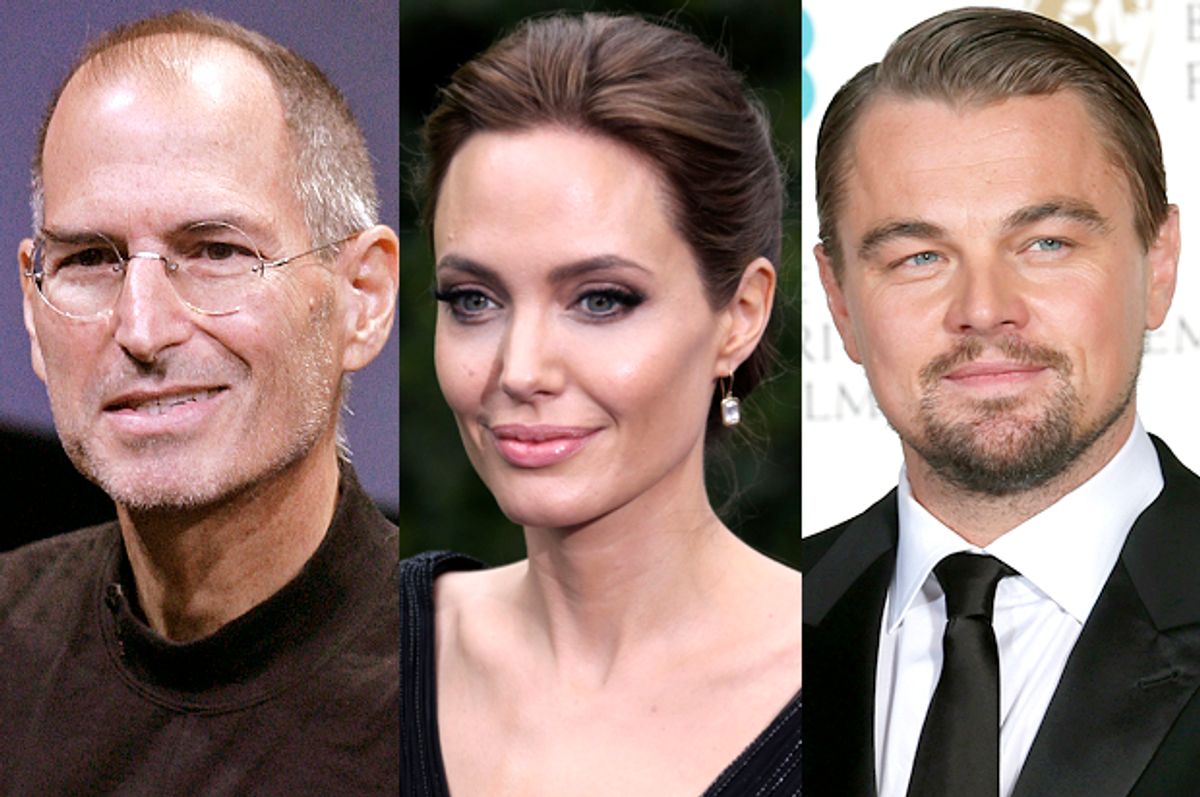 While Hollywood industry stereotypes have been around as long as Hollywood itself, from the trash-talking agent to the prima donna actress, for those of us outside the bubble, it’s hard not to think that these portrayals must mostly be overblown caricatures. This is an industry where functional people collaborate on big projects with a lot of moving parts; it can’t really be a bunch of deranged, megalomaniacal brats cursing at each other and flinging their shit around, can it? Well, this morning Gawker's Defamer posted a series of emails from the latest round of Sony leaks, and it’s safe to say, well, yeah, that’s pretty much exactly what it is.

Some back story: The emails center around the long-embattled, Sorkin-penned Steve Jobs biopic (not the one with Ashton Kutcher) that has been in the works at Sony for years. The project has been plagued by drama and personnel shifts — first David Fincher and Christian Bale were in talks to direct and star, then it was Danny Boyle and DiCaprio, then DiCaprio was out, then Bale again, then Fassbender, then pretty much anyone they could get — and it was finally announced a few weeks ago that Sony Pictures had lost the film to Universal. The leaked emails take place from February to November, and are mostly between notoriously abrasive producer Scott Rudin and Sony Pictures co-chairman Amy Pascal, with the initial point of conflict being Angelina Jolie, who wanted David Fincher to direct her forthcoming "Cleopatra" film instead of  helming "Jobs." You getting all this down?

While "Cleopatra" sounds like a nightmare and "Jobs" sounds positively cursed, it’s safe to say, we would watch a movie about this email exchange, because it has all the personalities, sassy zingers and high-drama of "Swimming With Sharks" (whose horrible boss Rudin was supposedly the inspiration for) or even a particularly good Ari-centric "Entourage" episode. From the trash-talking and threats to the bragging and begging, the emails confirms every stereotype we have about what goes on in Hollywood behind the scenes. Let us examine:

They trash-talk each other constantly, using impressively creative insults.

In an email from Rudin to Pascal: “The masturbatory call is a wank I have no time for.”

And this from Rudin, about Angelina Jolie: "I'm not destroying my career over a minimally talented spoiled brat who thought nothing of shoving this off her plate for eighteen months so she could go direct a movie ... She's a camp event and a celebrity and that's all and the last thing anybody needs is to make a giant bomb with her that any fool could see coming.” He also says that Jolie is “pissed because her fantasy toy-box isn’t ready for her to further toy with” and calls the movie a “$180m ego bath.”

And, no surprises, they are often very politically incorrect.

From Rudin: "Nobody needs to make a movie this badly -- at least nobody in this group -- to be raped in the process."

The egos are out of control.

In an email from Pascal to a Sony colleague: "They are ours. We don't work for these people.”

They have a ridiculously over-inflated sense of their own importance (seriously, Aaron Sorkin's grandiose speeches have nothing on this).

Here’s an excerpt from an email that Sony marketing boss Michael Pavlic sent Pascal: "People deserve this kind of movie and in some weird way we have a responsibility to take these kinds of risks. Not to make it seem like we're saving lives -- but I actually think that. This is the kind of film that makes me thankful for movies and they're few and far between these days.”

They are constantly threatening to ruin each other. While nobody actually says, verbatim, “You’ll never work in this town again,” it comes pretty close.

Rudin to Pascal: "YOU BETTER SHUT ANGIE DOWN BEFORE SHE MAKES IT VERY HARD FOR DAVID TO DO JOBS."

Later: “You are about to cross a line that won’t get uncrossed after you do it. Don’t go there with me. You won’t like the result. I’m deadly serious.” And: "You've behaved abominably and it will be a very, very long time before I forget what you did to this movie and what you've put all of us through ... You've destroyed your relationships with half the town over how you've behaved on this movie. If you don't think it's true, wait and see.

Rudin: "Let's see the next filmmaker WME puts in business at Sony or the next piece of star talent. I'll bet my house I'm right.”

Celebrities really are prima donnas, or are at least viewed as such by their studio handlers. (There’s no direct correspondence from Angelina here, but she sounds like a real piece of work.)

From Rudin, in one of the many correspondences about Jolie. “There is no movie of Cleopatra to be made (and how that is a bad thing given the insanity and rampaging spoiled ego of this woman and the cost of the movie is beyond me) and if you won’t tell her that you do not like the script — which let me remind you, SHE DOESNT EITHER — this will just spin even further out in Crazyland but let me tell you I have zero appetite for the indulgence of spoiled brats and I will tell her this myself if you don’t."

Celebrities are also treated like volatile children who need their egos buttered, as this letter from WME agent Robert Newman to Leonardo DiCaprio shows:

“In the 15 years since 'The beach' you have both grown immeasurably in your craft and abilities .... With this text, Danny feels he's found a script that can be as enduring a character study and portrait of our age and times as 'Citizen Kane 'was for a previous generation, from a writer who is the equal of Paddy Chayevsky ... Steve Jobs was a man who came from nothing and nowhere to change the world, as surely as Thomas Edison did, and and there's no better actor than you with the artistry and talent to help people understand what that must've been like."

Talks of Leo’s overdue Oscar happens behind the scenes too (and is levied as a bargaining chip).

"Just as you must surely feel great pride in helping bring Marty his Oscar on "the departed", everyone involved in this production desperately wants to help bring you the Academy award you so richly deserve."

Actors are generally treated like commodities to be bartered with (and even have their genitalia scrutinized). In October, still without a star actor, the Sony gang just start throwing names around.

"Fassbender is not a star yet, but a really fine actor who is putting together a terrific body of work," someone writes. "Shame just makes you feel bad to have normal sized male genitalia,” adds producer Michael DeLuca.

Side note: Earlier, Fincher weighed in on Adam Driver's casting in "Star Wars," saying “Adam Driver is a terrible idea, I’m with you."

Rudin to Pascal: “I don’t want a producing partner. I want a studio partner ... I have monumental respect for you and what you bring to the work we do together but the kum-baya part of this is a giant drag on everything for me, and I would be best left out of it as it makes me seriously ponder why I would ever want to continue doing this.” He also says that this “leaves me feeling lousy and shitty and uncared about.” (Oh, boo hoo).

… and the begging. Oh, the begging. This is from Pascal to Rudin in November, just before Sony lets the project go:

In a series of emails: “Why are u punishing me,” "You know you can do this," “I would do this for you You should do this” and something that appears to be the word please: "Pleae."

Industry bigwigs too, it seems, suffer with autocorrect. In our opinion, they also conduct way too much business on their (clearly very hackable) phones and via email. Is it too much to think that this could all be solved with a quick face to face?