"Girls" with baggage: Will the Lena Dunham controversy affect the experience of watching her show? 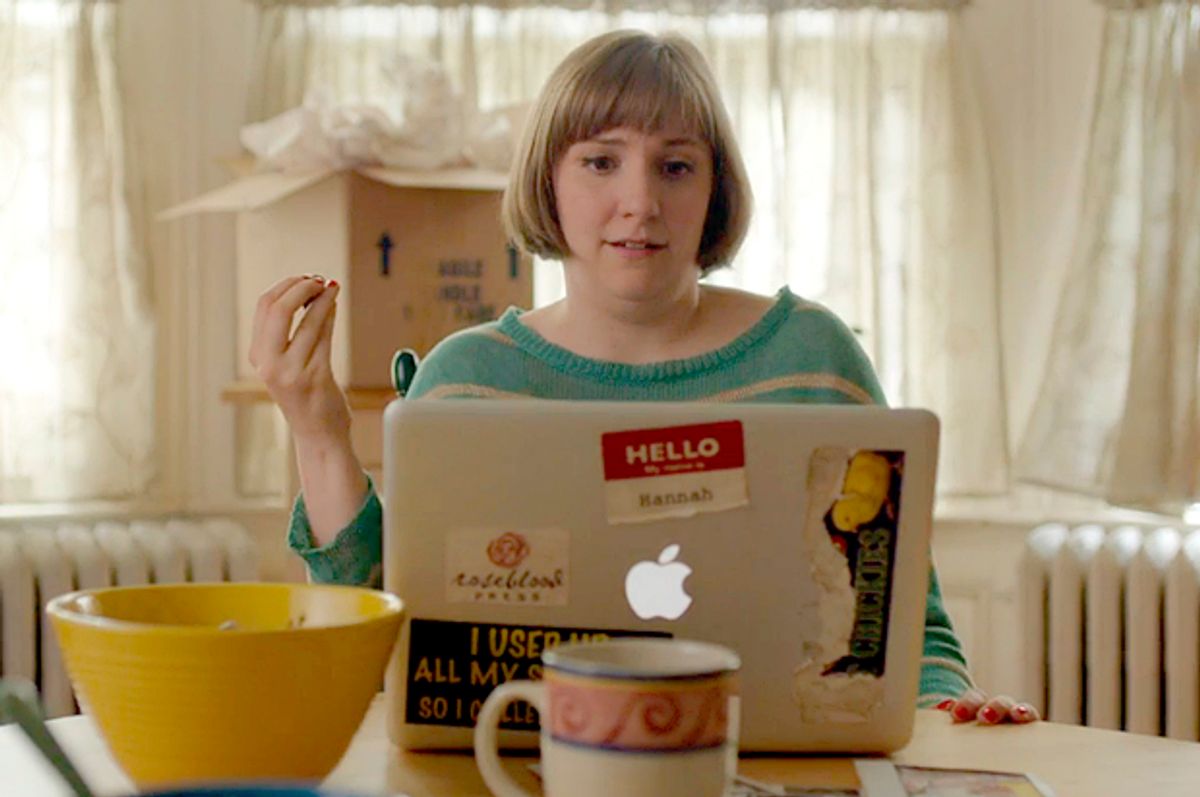 The line between "Girls" creator Lena Dunham and protagonist Hannah Horvath is already murky for many. Her more outrageous traits at times elicit a visceral reaction that would seem out of proportion if applied to any other show. Hannah’s not a guy or supporting a male ensemble, and so by some viewers (or secondhand critics who hate “Girls” but also don’t watch it) she’s treated less like a unique and complex character and more like some kind of cultural weathervane that always shows the wind’s blowing in the wrong direction.

All of the same things can be said for the public’s reaction to Dunham herself, too. The latest wave of drama over her memoir “Not That Kind of Girl” hits at a precarious time. The fourth season of “Girls” premieres Jan. 11 on HBO. The latest round of accusations and rebuttals surrounding Dunham’s personal stories could affect how we watch Hannah’s adventures at the University of Iowa, adding another layer of baggage to an already-saddled character.

It can be difficult to tell whether her critics hate Lena Dunham because they dislike what they see as the glorification of often-awful Hannah Horvath (though I would argue that her portrayal is more of a ritualistic humiliation with enough earned points of grace to keep the viewer invested in her story) or whether they dislike “Girls” on sight because of who created it — a young, privileged, unapologetic, liberal woman.

But Dunham lost fans, too, when chapters of her memoir began to be dissected online this fall. First, the essay in which she describes an unsettling memory of exploring her baby sister’s body that some critics deemed as sexual abuse. Her sister rejects that characterization wholeheartedly, but Dunham lost former supporters who saw her blithe treatment of that incident as a betrayal of abuse survivors, and she responded in "a rage spiral" on Twitter to the criticism. And now, the legal disclaimer that Random House will add to future editions clarifying that “Barry,” the pseudonym Dunham gave a campus conservative who raped her in college, is indeed a pseudonym, a sloppy bit of missed editorial oversight that disappointed and alienated some readers because of its grave implications for an actual Oberlin alumnus named Barry who accidentally walked into the line of "Not That Kind of Girl" scrutiny. Dunham fired back at critics yesterday, apologizing for unwittingly implicating an actual man named Barry and criticizing those who made her feel like she was to blame for her assault.

Should any of this drama affect how viewers watch “Girls”? In an ideal world, there would be a clear line between the personal life of a showrunner and the life of the characters depicted on-screen (if I’m wrong, Shonda Rhimes has the secret White House bunker codes). But knowing what we know about how personal lives do affect what happens in the writers’ room also muddies that line. In the essay “Barry,” she includes a vignette from the “Girls” writers’ room, which she describes as a place where all kinds of personal details are shared as ingredients in the TV show sausage. “I wonder how many loved ones watch TV looking for signs of their own destruction,” she muses. In this scene — we don't know when this happened — she pitches a version of the “Barry” rape story, including the absurd detail of a condom ending up hanging from a potted plant. Her co-workers don’t laugh, even though it’s clear from the setup “we laugh a lot, at things that shouldn’t rightfully be funny” that Dunham wanted them to, that she wanted to turn the story into the kind of uncomfortably funny scene that “Girls” does so well. Dunham keeps explaining her “confusing situation” angle, but is met only with empathy: “I’m sorry that happened to you.”

Flash back to Season 2's infamous “bad sex” episode, which ignited plenty of debate over the ambiguity of a rough sex scene between Adam and his short-lived other girlfriend Natalia. That scene looks different now, after reading Dunham’s essay. Did the “Barry” story make it into “Girls” in that way, albeit in a heavily fictionalized way?

Next season, Hannah heads to Iowa to study writing at the famed Iowa Writers Workshop. It’s an optimistic move for her and a break from the ups and downs of Adam, whose own theater success in a way helped galvanize Hannah’s ambition to pursue her own craft in a more serious manner. And it’s a time of reinvention for Hannah the character, away from the baggage of the college history she shares with Marnie and Elijah and into a new kind of intense fishbowl, where she can’t disappear into a crowd of millions when things don’t go as she planned. In that fishbowl, Hannah is going to have to learn how to listen to criticism — never her strong suit — and either stand by her style or allow what she’s learned to help shape it, not to mention learn how to separate herself from her writing. And that promises to be very fun to watch. But it’s going to be hard to watch Hannah go through that process and not think of how Dunham has reacted to criticism of her own book and of herself.