I'm not a sales assistant

Seldom am I more acutely conscious of my skin color than when I shop at stores like J.Crew and Ralph Lauren 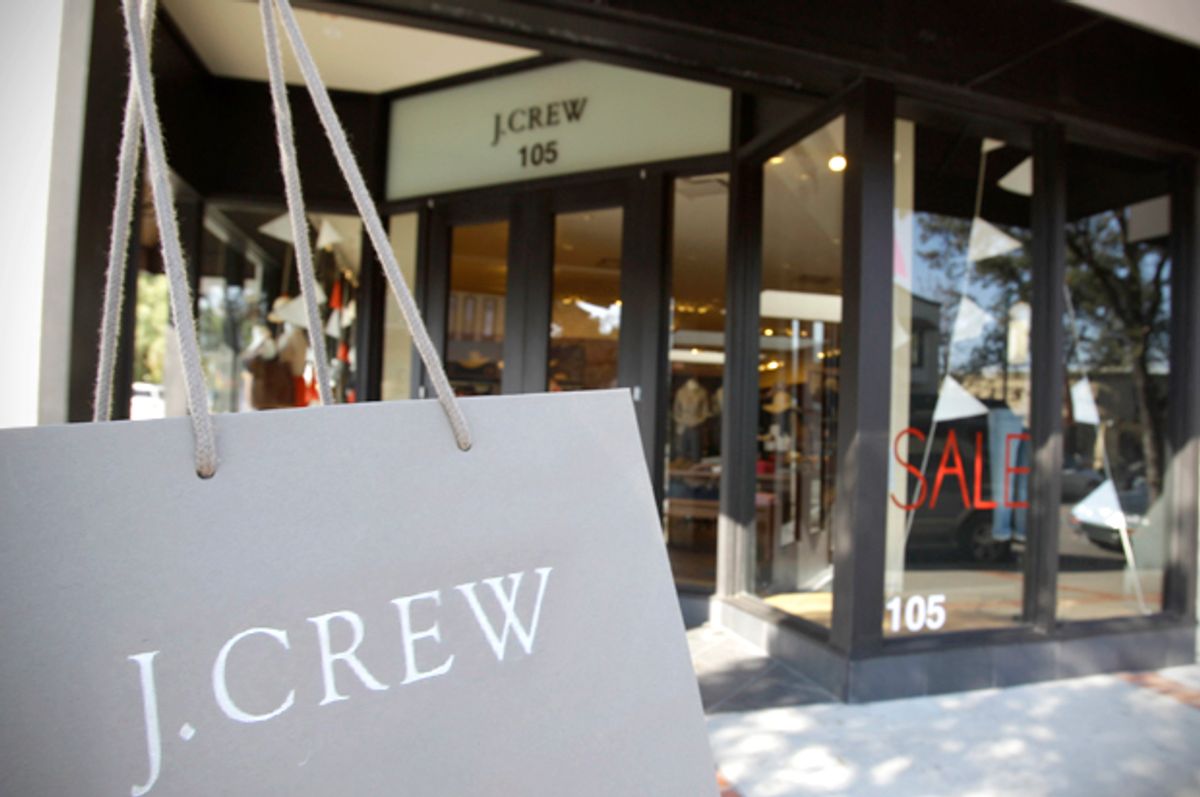 My style of dress is classic preppy. My fashion sense evolved from my years spent in boarding school, where I was required to dress that way for class: khaki pants, fitted dress shirts, crewneck sweaters, and penny loafers. J.Crew and Ralph Lauren could have used our campus to shoot their advertisements.

Some of my Black friends say my style is “boo-zhee.” What can I say? I prefer quality over quantity, avoid crowded stores like H&M, the Gap, and Zara where you’ve got scores of copies of the same item. I love blazers—especially those with patches—and own too many to count. That, along with my passion for seersucker suits, herringbones, calfskin loafers, striped belts, colorful braces, and plaids make me a female dandy. I can’t help it: If I’m wearing an outfit that makes me feel comfortable and look good then I feel like I can do anything.

But shopping at high-end stores while Black, especially young and female, too often feels like navigating a minefield of assumptions, microaggressions, and thinly veiled hostility.

More from DAME: "Gillian Jacobs: 'I've Always Kind of Been a Grandma'"

It usually starts as I step inside the store. “Hi, can I help you?” from sales reps with an over-penetrating gaze never really feels like a warm greeting.  I’m prepared to be watched closely, or ignored when I actually do need assistance because they assume that I won’t—or can’t—purchase anything. When I ask to see an item, they quickly tell me the price, then pause for my reaction to confirm that I’m pre-qualified to see the merchandise. When that happens I usually give the sales rep my dead-fish-eye look that says: Did I ask you how much it was? I asked you if I could see the damn thing.

White shoppers, especially White women in their mid-to-late 50s and up often assume I’m there to serve them:

Miss, can you start me a fitting room for me, please.

Can you tell me the price on this?

Where is the bathroom?

Do you have kale chips?

Which aisle are the Goji berries in?

Can you throw this in the trash for me?

Excuse me, I’d like to speak with your manager.

Miss, you’re all out of the Ms. Meyers lemon verbena countertop spray.  Can you check for more in the back?

What time do you close today?

Mind you, I’ve never worked a retail or service-sector job a day of my life.

Once I was in a Brooks Brothers in an airport in Chicago to purchase a sweater because I hadn’t dressed warmly enough. A woman standing in front of a set of shelves next to me asked me three times to “get her size.” I ignored her. Didn’t even make eye contact.

She huffed: “Miss, I asked you if you have this in my size.”

She shot me a look as if I had slapped her in the face, then glanced at my carry-on bag. Instead of apologizing, she turned up her nose, giggled, and said, “Oh, I thought you were just checking stock.”

I’ve found myself in Whole Foods with my groceries at the checkout line and been accused of taking a woman’s baby bok choy. Turns out, hers was still in the bottom corner of her cart.

As if those continuing incidents weren’t stressful enough, I recently encountered a painful symbol of America’s racial history in one of my favorite stores. On the day that the Staten Island grand jury announced that there’d be no indictment in the controversial police choking death of Eric Garner, my spirit was weighed down with sadness. I was still grieving the loss of Trayvon Martin, Mike Brown and the non-indictments in the Ezell Ford case and others.

More from DAME: "Can a Selfie Really Make the World a Better Place for Women"

I thought that shopping at Brooks Brothers would help soothe my pain, and that finding the right shirt or blazer would be good for my soul. Fortunately, nobody eyeballed me, followed me around or mistook me for “the help.” Things were looking promising as I made my way past tables of neatly folded cashmere cardigans and satin deco scarves. But then, I stumbled across a display with a small decorative bale of cotton stalks. In that instant, Brooks Brothers went from being a place for therapeutic shopping to a hostile environment. WTF? I thought to myself.

On a day when it was difficult just to be in predominantly White spaces, I was accosted by the sight of raw cotton. You may wonder: Why is this such a big deal? Because to African Americans, the sight of raw cotton is equivalent to a swastika. Without going into unproductive comparison of various holocausts and genocides, cotton is the icon that reminds us why our ancestors were snatched from their homeland, carted across the planet and subjected to centuries of nonstop horrors to build the infrastructure and wealth of this nation.

Non-Black people might look at the fluffy bolls and see something soft and pleasant. But we see endless fields of torture and misery. We are reminded of generations of backbreaking, soul-crushing unpaid labor, of the whips and stings of bare skin split open by whips and rubbed raw by chains. Of families torn asunder and nonstop rapes and the degradation and humiliation passed down in our DNA. We hear the Confederate anthem, “I Wish I Was in Dixie Land,” and it’s famed lyric:

Oh, I wish I was in the land of cotton,

Old times there are not forgotten …

Sure, we wear cotton, sit on it, sleep on it, and use it in everyday items just as everyone else does. But raw cotton is every bit as painful and offensive as those other visuals icons of white supremacy: the Confederate flag, burning crosses, KKK regalia, and lynched black bodies hanging from trees. It’s a form of the N-word that we can see and touch and smell.

So standing in Brooks Brothers, visions of the perfect shirt or blazer temporarily wiped from my mind, I realized that I needed to address this faux pas. I was calm and gracious as I pulled one of the workers aside, a nice White lady whose nametag said “Helen.”

“Excuse me,” I said to her.  She smiled expectantly. I pointed at the cotton display and made a face as if it stunk to high heaven. “Can you all please stop decorating your stores with cotton?”

“Oh,” she said, appearing confused as she looked between me and the display. “What’s wrong with it? Why don’t you like it?”

“My ancestors in Virginia had to pick that,” I said wearily. “I don’t want to see it in my face while I’m shopping.” Just like I don’t like going to urban stores like G-Star Raw and being verbally assaulted by the n-word and misogynist and homophobic rap lyrics blasting from the speakers.

Helen’s eyebrows converged, the blood ran out of her face, and her entire spirit dropped down into her loafers. She looked at that cotton as if she was seeing it for the very first time. I stormed away from her and continued shopping. On the way out with my crisp new 100-percent cotton fitted shirt in hand, Helen smiled at me and said, “Thanks for shopping with us.”

I responded by nodding back at the cotton display and saying, in my haughty Maya Angelou tone of voice: “Make it go away, Helen.” I went by to check the next day, and the display was gone, evidence that Helen took a lesson from that teachable moment.

More from DAME: "Is the Media's Desperation for Readers Becoming a Health Hazard?"

I’d had a similar experience when I lived in the Fort Greene section of Brooklyn as it was becoming gentrified. A new plant shop opened up on Myrtle Avenue next to a Black-owned barbershop. The shop was run by a 30-something White woman and man; let’s call them Ashton and Jenny.

Walking past, I made a note to stop in when I saw it: a huge tin bucket of cotton stalks displayed outside the store. Understand, despite gentrification, Black folks were still in the neighborhood and many of us lamented the overnight influx of White people and all that came with it – high rents and food prices, the entitlement, colonization, pricing out, amped up and overaggressive policing of people of color, and complaints about how loud and long our church services are.  So I stood frozen, mouth gaping outside the shop next to a chalkboard listing prices of various kinds of plants.  A Black man walking by popped his head in the doorway and yelled: “Y’all on some shit! You in a Black neighborhood sellin’ cotton. That’s that bullshit right here.”

Ashton seemed shaken. Jenny stood next to a pair of orchids looking like she had just been street-harassed.

I strolled into the store with a smile on my face. Ashton and Jenny looked cautiously hopeful, as if they expected me to assuage their emotions in the wake of the man’s cursing. I said in a tone that was both sharp and gentle, “The cotton is not such a good idea in this neighborhood. You’re right next door to a Black barbershop. Might want to bring the bucket inside and put it in the back. Out of sight.” Ashton swiftly did so.

After my recent Brooks Brothers incident, I wondered which other stores might include raw-cotton displays in their décor. The list that came up included Hobby Lobby, Michaels, Cracker Barrel, and Jo Ann Fabrics. When called to ask about this practice, only Hobby Lobby and Michael’s responded, both saying that they sell cotton stalks in their stores. The public-relations reps did not have definitive answers about the use of cotton in displays or décor.

It’s about much more than the cotton, which after all, is a pretty rare sight in most high-end stories. It’s about the assumptions, the attitudes, and the microaggressions that hang like a cloud over all Black shoppers, especially in businesses that seem incompatible with our demographics. The sheer energy of being watched, followed, spoken down to and taken for a faceless employee for no reason other than our Blackness, means we must brace ourselves for whatever indignities a simple shopping trip might bring our way.

It’s exhausting. We just want to move through the world like everyone else. We go to work and maintain our homes, shop for groceries and maybe indulge in a bit of retail therapy as a respite in tough times. We don’t want to be eyeballed, followed, mistaken for “the help,” or assumed to be thugs or thieves. And we damn sure don’t want a raw symbol of all the reasons we’re still suffering and struggling today to be decorating a space in which we are prepared to spend our hard-earned money.