From Dunham to Jackie, victims are backlash targets because they're the ones speaking out. Time to share the burden 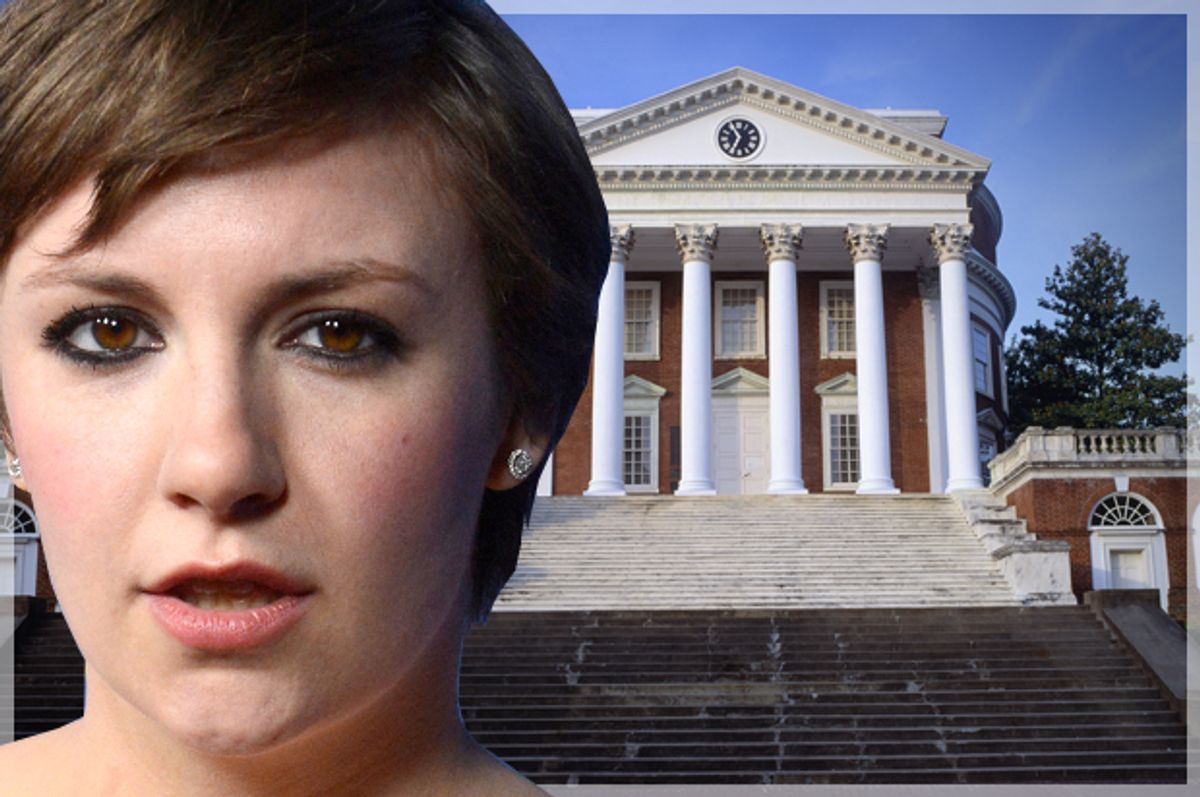 Looking back over the last two weeks, it’s tempting to say we’ve hit some terrible new low when it comes to denying the problem of rape and dehumanizing victims who dare to speak out. But while the names and details may be new, this fever pitch around Rolling Stone’s careless reporting and ethical failures (most egregiously in its treatment of Jackie) and Lena Dunham’s essay on a college assault in “Not That Kind of Girl” is familiar. Here again we have the same patterns of backlash that repeat and repeat and repeat so that we have our roles and lines well rehearsed for when this all happens again.

So while I agree with so many who have argued that Rolling Stone’s gross hunger for a shocking narrative that checked all the right boxes about its victims and monsters (sober woman, modestly dressed, outnumbered in such a way that resistance was an impossibility) was a terrible affront to survivors, there is one refrain I’ve heard a lot recently that I am not entirely sure about. I don’t know that these things have made it harder for women to come forward about being sexually assaulted. Not because I don’t see the damage that’s been done. But because I am not sure it could get any harder.

The treatment Jackie has received from Rolling Stone and others in the media, the gross “investigative report” into Dunham’s time at Oberlin College, these are just the most recent warnings to victims about the consequences of speaking out. But the specters of other women, both in our private lives and in the public eye, haunt that choice regardless.

Victims will now undoubtedly think of Jackie when they consider coming forward, but they will also think of the women in New Orleans whose cases were never investigated by a police force who blamed them for the violence they experienced. They will think of the lawsuit Bill Cosby and his lawyer have filed against one of his alleged victims and the smear campaign he waged against another. They will think of the women they know in their hometowns, in their high schools, in their families whose attempts to be heard and believed only brought heartache and shame.

But mostly, they will think, again, that this entire project of holding rapists accountable and creating space for victims to be heard rests entirely on their shoulders. Because that’s the other message our culture sends out with some regularity, that change only comes at the cost of their willingness to be exposed and dissected so that we can learn from their insides.

Where are the other stories that push us to consider the harms of our current system? Where are the other people willing to open up their personal histories and vulnerabilities and imperfections to the public so that we can know something about the damage that’s been done?

Jackie has continued to speak out, as has Lena Dunham. But where are the other stories that push us to consider the harms of our current system? Where are the other people willing to open up their personal histories and vulnerabilities and imperfections to the public so that we can know something about the damage that’s been done?

Why aren’t we hearing from the friends and family members and bosses and teachers who demanded silence from victims because hearing them would create messiness and pain that they refused to endure? Why is the burden of self-reflection and disclosure so unequally shared even though we are all implicated in the culture and system that ensures there will always be a next time?

Earlier this week, Elizabeth Stoker Bruenig wrote a compelling piece in Jacobin about the problem with relying on individual stories to make broad, progressive critiques of systems and structures. She is right to point out that we shouldn’t balk from reporting that exposes structural injustice but does not fit into clean narratives, I do believe there is an important place for these stories. They reveal things to us, raise uncomfortable questions, complicate narratives and challenge our expectations. But those stories need to be coming from all of us. Perhaps then, when we all share equally in the questions of memory, trauma, objectivity, we can unlearn the scripts because the shape of the conversation will change. And maybe, with time, bring us somewhere safer and more honest.