The bubblegum colors, the childlike imagery, the feigned innocence: Why this is the world's unsexiest lingerie show 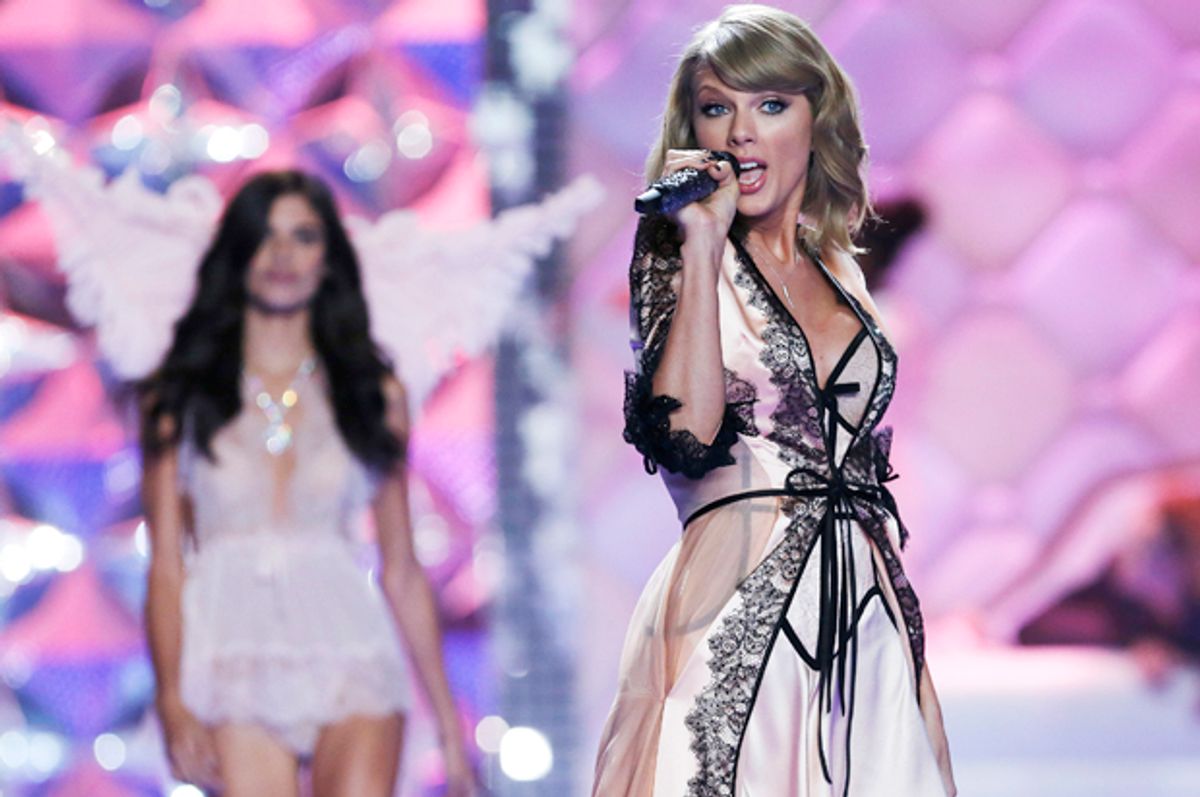 The Victoria’s Secret Fashion Show is a difficult phenomenon to describe. It’s a fashion show that happens on a runway, but it’s also taped and heavily edited for an hourlong broadcast on prime-time television. During the runway show, pop stars perform and interact awkwardly with the supermodels marching down the runway. Those models are called “angels,” and as a result, they’re all wearing wings — though what angels have to do with lingerie is anyone’s guess, really. And the angels are modeling expensive, one-of-a-kind lingerie, from a brand that makes most of its money through mall and catalog sales of basic undies. There are carefully enhanced breasts and carefully tanned butt cheeks all over the screen, delicately accented with flowing, beachy hair and pouty kisses blown at the camera. It’s a minefield of questionable sexual imagery.

As has become a sort of tradition, this year’s show drew yet another complaint from the Parents’ Television Council, which objects to the broadcast’s semi-nudity and sexualized imagery, especially so soon after “Rudolph the Red-Nosed Reindeer.” But I’m going to counter with my own protest. It’s not that the Victoria’s Secret Fashion Show is too sexy. To be frank, it’s not sexy enough. While the mannerisms and behaviors are all hypersexualized, the content of the show is so plastic and empty that it feels robotic. And while I’m sure the listless sex-doll thing is sexy for someone, Victoria’s Secret's agenda — and its audience — becomes a little harder to determine.

Runway shows, as with many other aspects of the fashion industry, are typically meant for a specific, insider audience; the haute couture is a brand’s way of signaling a vision for their upcoming products to the moneyed retailers and influential critics that will filter the trends through to the general public. It’s spectacle, but it’s marketing at an industry event, with extra bells and whistles. Victoria’s Secret is doing the same thing, but bringing it directly to the audience; in lieu of trying to convince magazine editors and department stores to pick up their lines, they’re putting everything in their own stores, and coming straight to you, the potential buyer, with what they’re thinking. It’s skipping several steps in the high-fashion distribution chain while retaining the glitzy splash of the runway show. (Vogue, for example, seems to do a lot more coverage of the show itself, and the supermodels who walk the runway, than the actual clothing being displayed.)

It’s a neat little bait-and-switch — Victoria’s Secret has built a brand on sending a certain decadent kind of glamour for mid-range prices, and that means having both significant catalog sales and expensive runway models. But none of that really prepares you for the bizarre experience of watching the show itself, which aired last night on CBS.

The show itself is edited to be part reality show, part runway show, part extended advertisement. The angels are characters in a story of pretty wish-fulfillment, referred to only by their first names or as “the girls”; the hard work of prepping for and then starring in a runway show is portrayed like a two-week-long slumber party. The models look like awkward giraffes everywhere except on the runway — unbelievably tall and thin, tottering in stilettos. Some, like Adriana Lima and Alessandra Ambrosio, get special in-depth features on what it means to be a supermodel doing the Victoria’s Secret Fashion Show for one more year. (Evidence indicates that both models are being paid to reply that it makes them happy.) And as the whole lot of these models are dating or married to rich and famous men — athletes, pop stars, actors — the overall effect is of those pretty girls in middle school that made everything look easy, continuing on their path of being implausibly perfect. In last night’s show, a brief segment delved into Karlie Kloss’ background as a ballerina, and that makes perfect sense: an art form that is terribly brutal and demanding behind-the-scenes, but in performance is all ease and grace onstage.

In 2010, Camille Paglia wrote a controversial opinion piece in the Sunday Times about pop star Lady Gaga, writing: “Despite showing acres of pallid flesh in the fetish-bondage garb of urban prostitution, Gaga isn’t sexy at all — she’s like a gangly marionette or plasticised android. … so calculated and artificial, so clinical and strangely antiseptic …” She observes later: “For Gaga, sex is mainly decor and surface; she’s like a laminated piece of ersatz rococo furniture.” I don’t agree with Paglia that Lady Gaga is the problem with sexuality in the modern era; much of Paglia’s diatribe is tinged with nostalgia for the good-old-days that I could frankly do without. But that description of sexual artifice — of behavior that mimes eroticism without seeming to really want it — came back to me very strongly when I was watching the Victoria’s Secret Fashion Show.

Every woman onstage, including performers Ariana Grande and Taylor Swift, looked painfully desexualized. Grande’s stripper boots and vaguely bondage gear — her go-to look — coupled with her deliberately childlike demeanor makes her look like a tween in borrowed clothes; and Swift is much better at conveying anger, desperation and envy through her performances than raw sexuality. And every model onstage, from the most famous to the least, played for innocent while wearing almost no clothing. Even that term “angel” suggests innocence. Candice Swanepoel says in the show of the set of wings she’s going to wear down the runway: "It's almost like a childhood fantasy coming true ... I've always wanted to be a fairy!” And amid all the bright chatter about how much fun it is to do the show, the presumably incredible hard work leading up to it — the diet and fitness regimens, the difficulty of tottering around in stilettos on a runway that doubles as a screen, the weight and fragility of the wing contraptions — is neatly, conveniently backgrounded. These are not women who work, these are “girls” having a party.

It’s the stuff of fantasies, underscored by the names of each runway segment: “Exotic Travels,” “Fairy Tale,” “Pink.” Media around the show is almost entirely about the models’ beauty tips: Hair, makeup, workouts. Whose fantasy? It’s not totally clear. But the numbers indicate that it’s women, in vast numbers, who watch the show; last night’s show got a 5.1 share in the female 18-34 demographic. That would certainly explain the lack of attention to the models being truly sexual while they’re strutting their stuff.

But I think it’s a little more than that. Victoria’s Secret isn’t just selling lingerie, it’s selling a fantasy of self-actualization that goes with the lingerie. Diet and exercise are talked about constantly. Behati Prinsloo explains in this piece that pizza is an indulgence saved for after the show, for example. It’s the type of flippant self-denial that women frequently turn to in our culture, whether that’s on a campaign trail or prepping for a film role. But up on that runway, strolling around in lingerie, the Victoria’s Secret models are supposed to be decadent, indulgent and desiring. And, as I’m sure we can all agree, it’s very hard to feign enthusiasm for sex when you can’t even have pizza.

The Parents’ Television Council aside, I’d love to turn on my television and see an hourlong show on CBS where a bunch of beautiful, empowered women wore things that made them look awesome and sashayed down the runway to the sound of applause while pop music plays in the background (this is why I watch “RuPaul’s Drag Race”). But they’ve got to own it, and these listless, insouciant dolls can’t possibly own it — they’re too thin, too young, too tired.

Victoria’s Secret has an annual list called #WhatIsSexy that determines, I guess, what is sexy for the year. Their collection this year is a laundry list of facial expressions (“sexiest smile”), body parts (“sexiest legs”), and occupations (“sexiest mom” and “sexiest songstress”). If Zooey Deschanel has what is called “sexiest sense of humor,” then — really, Victoria’s Secret, what is sexy? I’m not sure you really know. There’s a cynical part of me that concludes, that’s the point. The Victoria’s Secret Fashion Show is for women, to make them better consumers. If women up there owned their sexuality — if they could clearly state it and define it as something separate from spectacle and makeup and weight loss — maybe women at home would be convinced they could, too. And then Victoria’s Secret would be in a quandary. Because it's hard to sell sexy to women who know they’re sexy already.