"What's up with the rag head?": When I starred in a Facebook ad

One angry commenter said he'd rather cut his own wrists than see my face. Here's what I wish those people knew 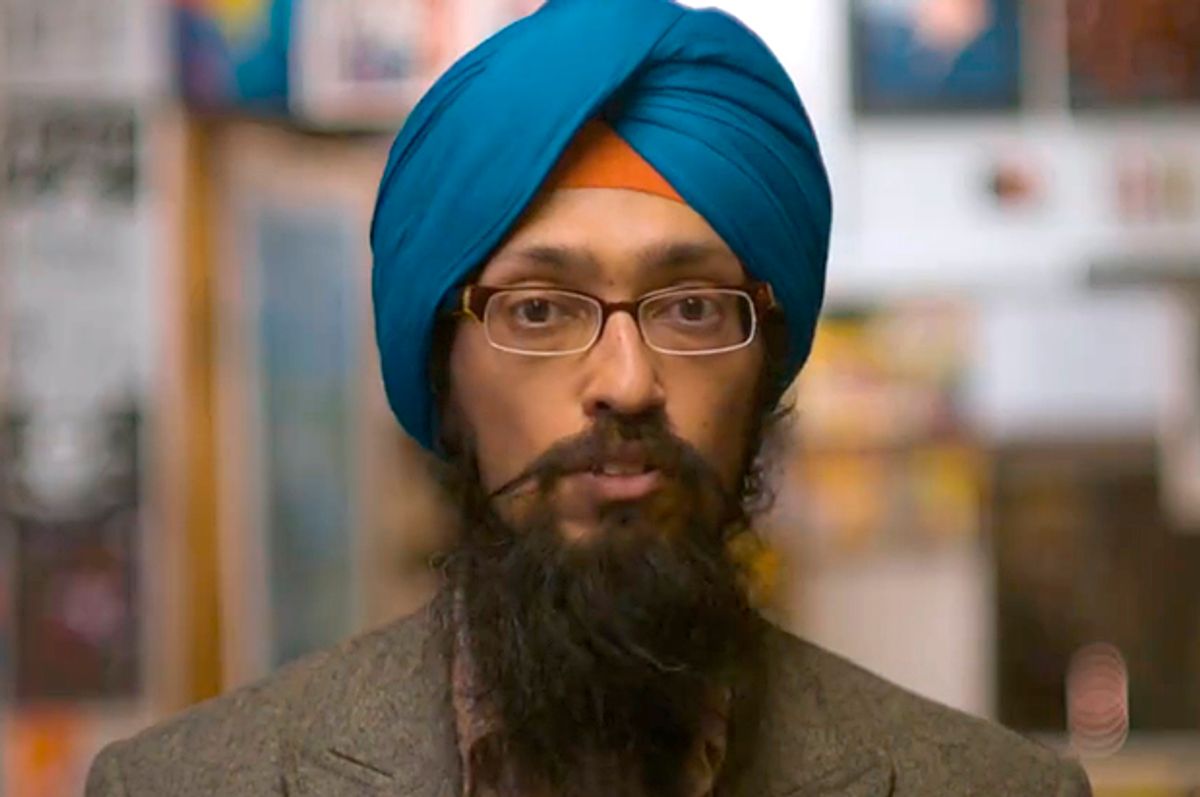 A screenshot of the author
--

For the past few days, I’ve been appearing on the timeline of many Facebook users in the U.S. as part of the Facebook tips series.

I’m not an actor. I’m a comic book artist. But when a friend I met at a comic festival in New York City asked if I’d like to appear in the ad, I figured, why not? I suited up in my favorite blue turban and went to a comic book store in Manhattan for the shoot. The final product is a 28-second piece meant to solicit user feedback and recommendations for a better Facebook experience. It has now been viewed close to 5 million times.

The feedback has been all over the map. Some users want a dislike button, which I wholeheartedly concur. Some want the old look and feel of the site back. Many want to see fewer sponsored ads. Amen to that.

But more than a handful have taken an issue with the messenger. Who happens to be me. These users have taken umbrage with my countenance. A turban, mustache and a DNA spiral of a beard have provoked a range of responses, some of which I have never heard before despite being stereotyped and targeted all my life for standing out.

“Get the sand niggef off my news feed. Please and thank you”

“Why would you use a towel head to promote this, ur as crooked as Obama.......no wonder ur a billionaire”

“What terrorist group does this guy belong too?”

“this is horrible, Facebook should be promoted by a different person, i have lost a lot of respect for Facebook because of there choice to use this person.”

“Can I borrow your towel on your head I ran out of toilet paper please sir?”

“What's up with the rag head?”

“Get that Isis terrorist off of your ad”

“Get this camel jockey off my news feed pronto!”

“Turban. = not my countries views”

“I literally just stepped into a warzone....Hahahaha”

“I had rather cut my wrist than see this”

A few users have confronted this fear and loathing with some basic facts about my faith, Sikhism. Some have mentioned I am not Muslim. Others have thrown the labels of racist, bigot and ignorant back at these users.

These might be factual statements, but they miss the big narrative of our lives. It seems natural and easy to just define these irritated souls as racists, but even they have complicated life stories beyond their fears.

I could ignore them totally and just focus on fellow citizens who appreciate my presence. But I have always believed there is way more than meets the eye. In that spirit, I want to share with them the brief arc of my life, which might help lay to rest our simplistic judgment of people at first sight.

I was born in our nation’s capital to a Woody Allen look-alike in a turban and beard, who was married to a woman 10 years his junior. My birth certificate identified me as a Caucasian.

I moved with my family after a few years to India and in my first teenage year survived a genocidal massacre of thousands of Sikhs in India following the assassination of the Indian Prime Minister Indira Gandhi. Sikhs were hunted by their turbans, long hair and buns. As part of their spiritual pursuit Sikhs do not cut their hair. Thousands of Sikhs were burned alive. My family survived a mob and spent a few nights hiding in a neighbor’s house.

A few years later I was back in my homeland ready to embark for college days. A few months in Southern California turned out to be one of the most challenging of my life. People called me all kinds of names: “genie,” “clown,” “raghead” and others I have forgotten. As an 18-year-old these barbs pierced my thin fair skin.

My sophomore year in college I went to a barber shop. In a single clip my long hair lay on the floor. My hair was cut really short. I wanted to get lost in the crowd, become invisible. And for a while I succeeded — until the Hispanics started claiming me as their own. Somehow I looked like one of them, and many would approach me in public and start speaking in Spanish.

My first infatuation was a Colombian graduate student. It turned out to be a one-sided affair, but she gifted me a book that would go on to be one of my all-time favorites. “Flatland” by Edwin Abbott. If you have not read it, get a copy and tickle your three-dimensional imagination.

My first love was books. Starting in college I got in the habit of reading as many books as possible at once. Foucault, Fanon, Plato, Asimov, Huxley, but there was one that rattled the cage of my life. “The Tibetan Book of Living and Dying” by Sogyal Rinpoche. I started practicing long meditation sessions.

Somewhere along the way I fell in love with words spoken 500 years ago by revolutionary men named Nanak, Arjan, Angad and others who carried their experience from the 16th century onward.

These men spoke, sung and wrote words that would create upheaval. They literally created a new language to provide access to spiritual treasures for all who were deprived just based on the caste they were born into in the land known as South Asia today.

Words spoken to emancipate women hidden behind veils, cultural traditions and whims of male chauvinism. Bystanders for generations rose to fight injustice. Thousands would be butchered who refused to bend to the tyranny of Mongol and Persian invaders.

The 10 founders of the Sikh faith all wore unshorn long hair crowned within a turban. Those who followed them did the same, announcing their presence proudly.

I tasted these words and decided to live the Sikh way of life for the first time.

Eventually I bid farewell to the electric shaver and trips to the barber shop. Weeks turned into months and hair kept growing.

Moments after the 9/11 attacks I would be a target of fellow Americans' ignorance, fear, disdain of the head-covering that has changed my life in ways I could not imagine.

I discovered my passion for cartooning as a medium to express my frustrations and exultations. Last year I donned the uniform of Captain America and walked into the streets of New York City inspired by a cartoon I created three years ago and a photographer’s vision using images to build bridges. My first instinct was not to do this, since I was scared to step out in a skin-tight uniform to expose my skinny body. I have always had a body image problem so it took months of mental chatter and a massacre of Sikh worshippers in a Milwaukee Sikh Gurudwara (temple) to convince me that I would survive this journey without any scars.

That first trip has turned into a whirlwind journey from New York to Los Angeles to Kansas and hopefully many more stops across our 50-state union.

There you have it, a brief arc of my American story hidden behind what the eyes cannot see at first glance. This journey is not very different from countless immigrants throughout our young history who have arrived from myriad global destinations to make the United States their home.

As this story went to press, I heard from Facebook, saying they were going to start actively monitoring the comments and removing the racist comments. For now, I leave you with the words of 19th century Scottish novelist, poet, essayist and travel writer Robert Louis Stevenson: “Keep your fears to yourself, but share your courage with others.”