Robert Kraft was honest about the new policy: It's a giant publicity stunt 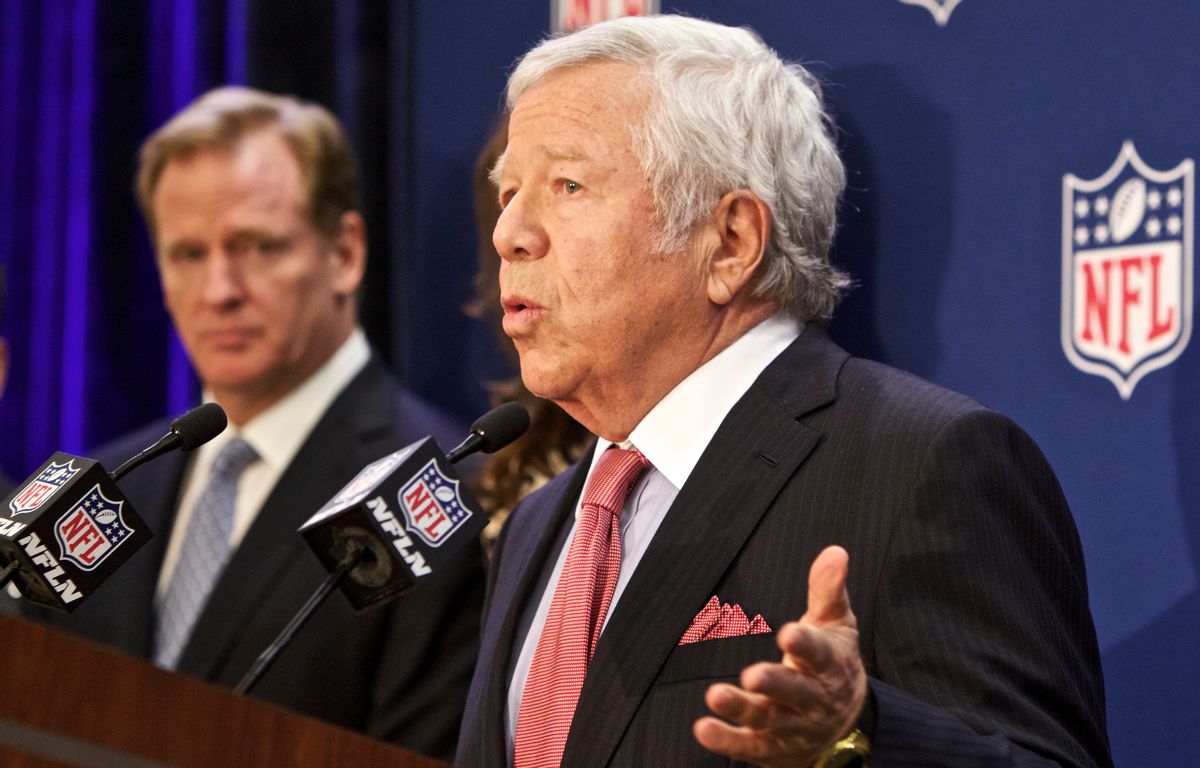 The NFL announced on Wednesday the adoption of a new conduct policy that league commissioner Roger Goodell described as "tough" and "better" when it comes to holding players accountable for committing violent crimes. Preceded by favorable Wall Street Journal profiles as well a damning New York Times report (which indicates that the NFL still does not care about women), the new policy has been presented as a genuine effort to improve how the league doles out discipline in the wake of the Ray Rice and Adrian Peterson cases. But, as New England Patriots owner Robert Kraft indicated this week, the change is actually all about publicity.

At a press conference announcing owners' decision to adopt the new policy, Kraft explained why the league had agreed not to hand over final authority in disciplinary proceedings to an independent arbiter instead of Goodell. “That’s the one person that understands what’s important, long-term interests of the game,” Kraft said. “Owners can have specific interests, players can -- that’s short-term. But the commissioner is always looking for the long-term best interests of the game.”

In other words, owners agreed to continue letting Goodell do what he has already done: make decisions that "protect the shield" and the NFL's business interests, which often means keeping players on the field even after they've committed violent crimes. But, after the intense backlash that followed the Rice and Peterson cases, protecting the league's "best interests" might also mean doling out harsher punishments from an even more centralized place to preempt scrutiny. Travis Waldron at Think Progress breaks it down well:

The lesson the NFL took out of this, then, is that not that its disciplinary procedures are out of whack; that it overstepped its bounds in an attempt to mitigate public backlash to its own bungling of the Rice case; that a carefully-bargained policy with player and union input might prevent that in the future; or even that, perhaps, it shouldn’t be in the business of positioning itself as our nation’s moral arbiter.

The lesson it took, instead, is that to prevent another public relations crisis, it needed to consolidate its power and bring down even harsher punishments. In the best interests of the league.

Waldron goes on to note that consolidating power over disciplinary proceedings and placing it in Goodell's control "will virtually ensure that the disciplinary process turns into a battle over labor rights and NFL discipline," which has already been the case for Rice and Peterson. In both instances, the NFL ignored labor agreements in an effort to protect its brand -- and so far, it's backfired. And until the league makes changes that will actually discipline players fairly if and when they commit violent crimes -- and until it starts to take seriously the poor treatment of women, or anyone really -- its attempt to cast itself in a positive light will continue to backfire.