The "ex-gay" movement won't give up 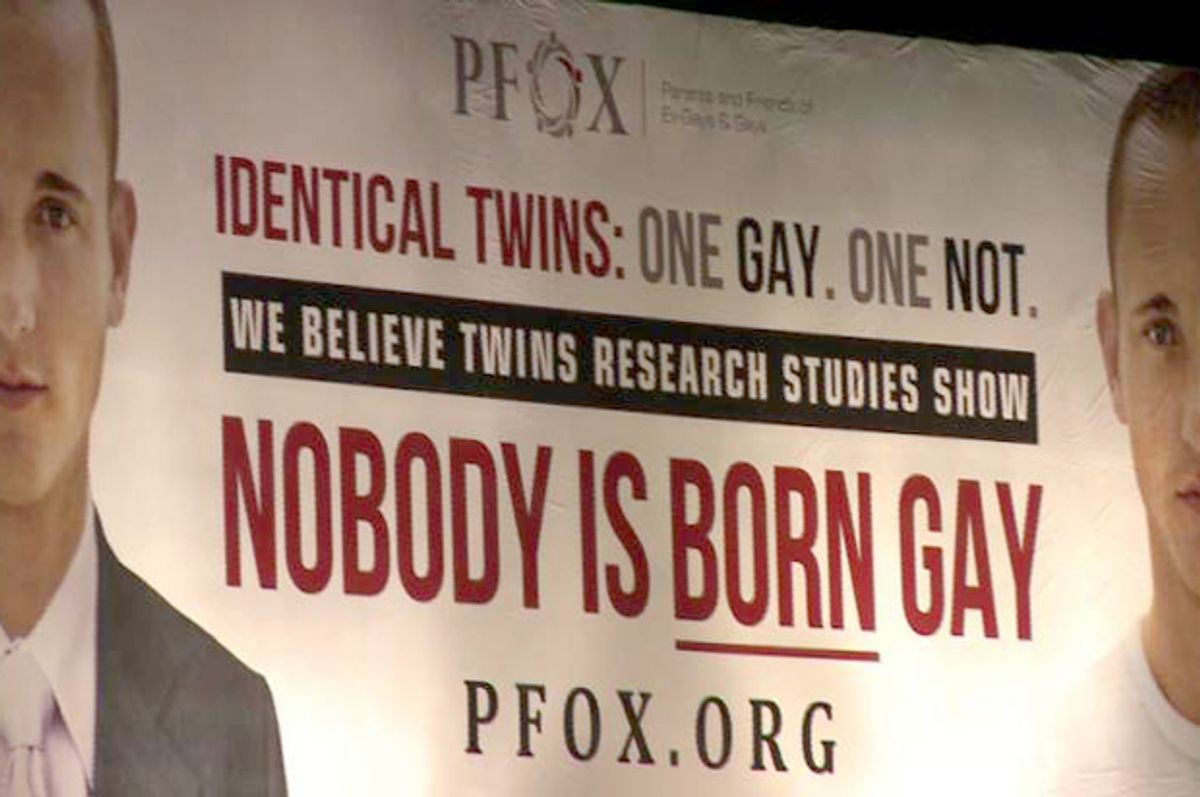 At a moment in our country's history when LGBT rights are surging forward, perhaps it's inevitable that the forces of bigotry would offer up a few last sad gasps. How else to explain the new billboard appearing in Richmond, Virginia, proclaiming that "Nobody is born gay"?

The highly unscientific claim, currently blazing on Interstate 95, features a photo of a pair of twins with the message "Identical twins. One gay. One not. We believe twins research show nobody is born gay." It comes via PFOX – "Parents and Friends of Ex-Gays and Gays" -- a self-described national nonprofit seeking to "educate, support, and advocate for individuals and parents on the issue of same-sex attraction." In a statement on its site, PFOX explains, "Identical twins have the same genes or DNA. They are nurtured in equal prenatal conditions. If homosexuality is caused by genetics or prenatal conditions and one twin is gay, the co-twin should also be gay … Because identical twins are always genetically identical, homosexuality cannot be genetically dictated." By that logic, identical twins should share the same predispositions to allergies – even though they often don't. Identical twins should either both have asthma or neither have it – but that's not the case. You know why? Because identical twins are, in fact, not 100 percent genetically identical. A breakthrough European study published earlier this year isolated genetic variations in identical twins. It's called science! But here's the bigger point – who cares?

What if sexuality is a uniquely individual blend of biological and environmental factors? What if that's good enough? The rights of a large and diverse population are far more complex than a Lady Gaga lyric. And the arguments over how sexual orientation develops have too long been fuel for those who seek to "fix" gay, lesbian and trans people, fodder for the pathetic and truly damaging argument that you can just think your way out of homosexuality -- and that you should. But if you aren't fretting over why someone is gay, you don't have to worry about changing him or her. It's just that simple. And as Richmond gay rights advocate Sally Mullikin tells local news WTVR, "To think that an advertising agency would hang a billboard like that over one of the largest gay communities in the state is appalling."

Samantha Ames, a campaign coordinator with the National Center for Lesbian Rights, told MSNBC last month that "A lot of people are surprised when they hear that as many as one in three LGBT people have been subjected to conversion therapy. The reason that’s so high and we hear so little about it is because the survivors have been silenced by the trauma itself." But that is, fortunately, changing. When a young man's fiery declaration that "I don't like mens no more" went viral this fall, it was mostly viewed as a sad, over-the-top display. And it's doubtful that it's any coincidence that the Virginia billboard has appeared right at the same time that Washington, D.C., has moved forward to prohibit gay conversion therapy on minors. California and New Jersey have already banned the practice, and in November, members of the United Nations Committee Against Torture questioned State Department officials on its continued use in the U.S., and its "potential violation of the Convention against Torture and Other Cruel, Inhuman or Degrading Treatment or Punishment." It's kind of a bad time to be you, isn't it, PFOX? And an offensive, idiotic billboard won't change the fact that the gay conversion movement is dying out, because luckily for the rest of us, there's still a cure for ignorance.