"Inherent Vice": Pynchon meets Anderson in an absurd, glorious search for meaning, circa 1970 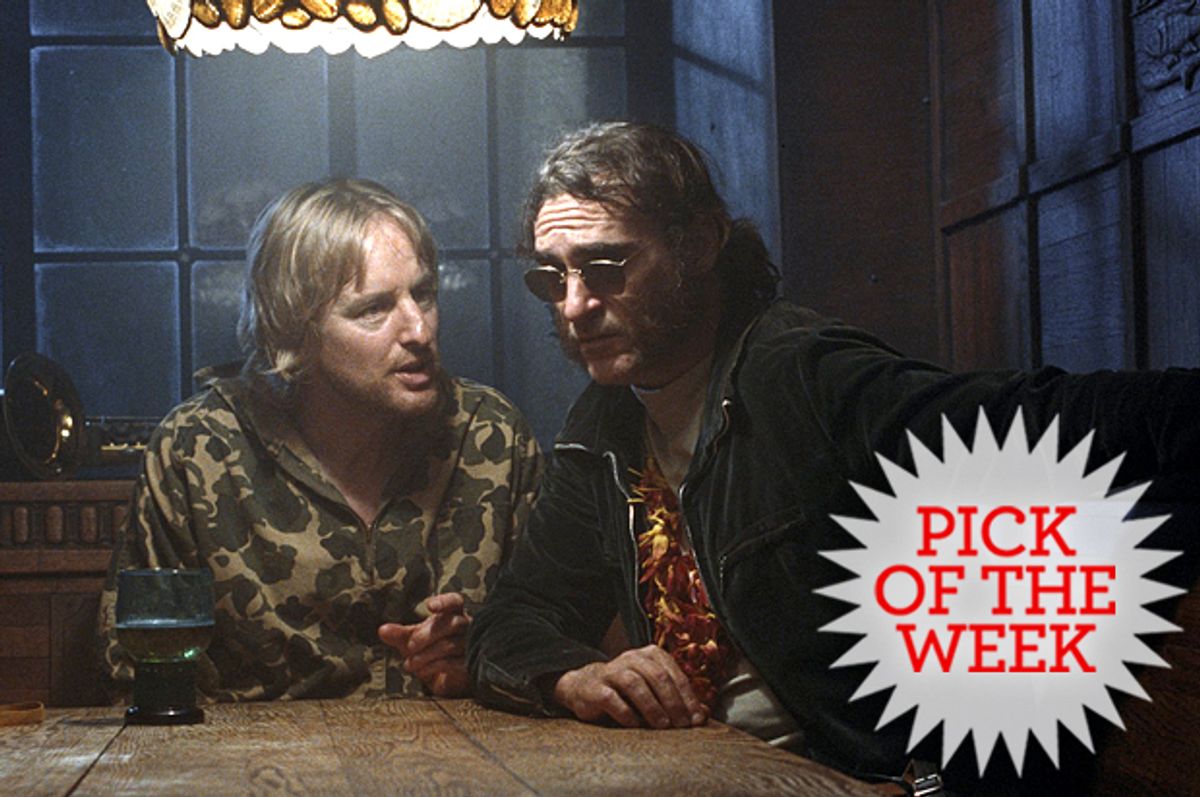 After a second viewing of Paul Thomas Anderson’s comic, mournful and gorgeous L.A. elegy “Inherent Vice” – the first-ever screen adaptation of a Thomas Pynchon novel – I no longer suspect it of being an “interesting failure.” This shaggy-dog saga of stoners, cops, neo-Nazis and tycoons, set amid the receding tide of 1960s euphoria in the Manson-traumatized and weed-baked City of Angels, uses its apparent directionlessness to disguise its true intentions. Those are grand, and maybe even grandiose: Like Anderson’s other films (and like Pynchon’s other books), “Inherent Vice” is a quest to find what can’t be found: That moment, somewhere in the past, when the entire American project went off the rails, when the optimism and idealism – of 1783, or 1948, or 1967 – became polluted by darker impulses.

As Pynchon’s title suggests, the quest is futile because the American flaw, or the flaw in human nature, was baked in from the beginning, a legacy of evolution or of God. But no quest is as noble as a hopeless one, and in the perennially stoned but entirely uncorrupted hippie private eye Larry “Doc” Sportello, played here by Joaquin Phoenix in another wonderful performance that should win awards but won’t, this quest has a noble hero who suffers for his purity. Doc and his dim but loyal maritime-lawyer sidekick, Sauncho Smilax (Benicio Del Toro), immediately call to mind two other pairings: Don Quixote and Sancho Panza, and Hunter S. Thompson’s Raoul Duke and his 300-pound Samoan companion, Dr. Gonzo. Neither of those is accidental. It has not escaped my attention that Thompson styled himself “Doctor,” despite the lack of any corresponding degrees, or that Del Toro played Dr. Gonzo in Terry Gilliam’s film of “Fear and Loathing in Las Vegas.”

“Inherent vice,” as a term in commercial law, refers to the fact that in any contract or transaction there are forms of risk that cannot be avoided. Ship eggs by road or rail, and some of them will get broken. But it also has a broader meaning connoting the fundamental instability of physical objects, and is used in that sense by librarians and archivists: Books and manuscripts eventually degrade and crumble into dust; as a film buff like Anderson surely knows, old motion-picture prints on cellulose acetate melt away into vinegar-scented glop. (Something like 90 percent of the films made before 1920 have been lost.) Both kinds of inherent vice are on display in “Inherent Vice,” one might say; Doc Sportello’s attempt to connect the threads of nefarious conspiracy beneath the surface of 1970 Los Angeles is undermined both by the flawed nature of the universe and by the sorts of things that go wrong in any human endeavor driven by lust and greed.

There’s an essential vibration of sympathy – a vibration of craziness, or a vibration in response to the craziness of the world – that ties together Anderson and Pynchon. One could almost say that Anderson’s previous two movies, “The Master” and “There Will Be Blood,” feel more like Pynchon novels than this one does, adapted from one of the hermetic writer’s friendliest books. I suppose Pynchon readers will have more patience with the movie’s numerous tangents, or with the voice-over narration from Sortilège (Joanna Newsom), a character whose role in the story, and in Doc’s life, is not entirely clear. (For whatever it’s worth, her unusual name refers to sorcery or witchcraft, and more specifically to the practice of foretelling the future by drawing lots.) But you definitely don’t need to feel like you have to read the book first; in either medium, making sense of the plot isn’t really the point.

Shot by cinematographer Robert Elswit in a muzzy, sunlit L.A. haze and a variety of little-used and arresting L.A. locations, “Inherent Vice” opens in classic film-noir fashion, with the reappearance of a woman from the past. That would be Shasta Fay Hepworth (Katherine Waterston), Doc’s onetime “old lady,” who has now crossed over to the “straight world.” She shows up one night at Doc’s apartment in Gordita Beach – which is fictional, although Pynchon himself once lived in the surfside community of Manhattan Beach -- and spins a tale of how she’s gotten herself tangled up with a shady real-estate tycoon called Mickey Wolfmann (Eric Roberts), his artificially youthful English wife (Serena Scott Thomas) and the wife’s hunkalicious “spiritual consultant.” I could tell you more about that, including Mickey’s connections to neo-Nazi motorcycle gangs and black radicals, but you’re honestly better off experiencing these things as Doc does, through a haze of cannabis and uncertainty, intuiting rather than fully understanding all the echoes and interconnections.

Despite his dubious personal hygiene and his excessive intake of weed, Burgermeister beer and other drugs when he can get them, Doc is actually closer to Raymond Chandler’s Philip Marlowe – or Ross Macdonald’s Lew Archer, more to the point – than he appears. At the dawn of the Me Decade and in the wake of Altamont and the Manson killings, with the Vietnam War escalating fast and the counterculture gone sour, Doc still believes in the possibility of human redemption. For himself? Possibly, but certainly for Shasta Fay, for legendary surf-rock saxophonist Coy Harlingen (Owen Wilson), who is hiding out in Topanga Canyon and pretending to be dead, and maybe even for Doc’s nemesis, tormented flattop supercop Christian “Bigfoot” Bjornsen (Josh Brolin), who likes to remind people that the L.A. Times once described him as a “Renaissance detective.”

In fact, Brolin nearly steals the entire show with his soulful performance as a guy whose hidden desires are just about to bust through his square-jawed, John Wayne Republican exterior. There’s an idiotic sight gag involving Bigfoot and a chocolate-covered banana that had me guffawing so hard I missed most of the ensuing dialogue. But “Inherent Vice” is like that; you’ll have to enjoy it for the pileup of exquisite images and hilarious episodes, and let go of the need to hold the whole thing in your head, or you won’t enjoy it at all. What happened to Mickey Wolfmann, and who murdered the dead neo-Nazi next to whom Doc wakes up in the rubble that will one day become a tract-home development with glorious views of the Dominguez Flood Control Channel? I don’t know, and it doesn’t matter. Whether Bigfoot can find a way to relate to Doc in a less sadomasochistic fashion, and whether Coy Harlingen’s big mistake can be undone (and his surf-sax career relaunched), those things matter.

Among the other delirious delights of “Inherent Vice,” we get Martin Short in a bizarre and marvelous cameo as a velvet-suited, coke-snorting dentist who may or may not be the brains behind the Golden Fang, which may or may not be a heroin-smuggling syndicate, a dentistry tax dodge or both. Reese Witherspoon plays Doc’s straight-world girlfriend, an assistant D.A. who is totally disgusted with herself for being in love with him, while Maya Rudolph (Anderson’s off-screen spouse) has a tiny role as Doc’s part-time receptionist that at first seems pointless but is full of exquisite touches. I can’t really explain why it’s hilarious when Rudolph cheerfully says “Bye now!” in her receptionist voice to a miniskirted young woman who emerges from a session of weed and nitrous oxide with Doc and is on her way to a “date” with a pair of neo-Nazis. It just is.

It’s not entirely wrong to describe “Inherent Vice” as a shambling noir that splits the difference between “The Big Sleep” and “The Big Lebowski,” but that may convey the misleading impression that the filmmaking is haphazard or that not everything in the movie serves a purpose. I glimpsed the looming shape of the movie much more clearly on a second viewing, coming through the pot haze like the Golden Fang (which is also a schooner with a troubled history) seen through the fog off Long Beach or San Pedro. It’s both a quest for some essential meaning in America circa 1970 (and circa 2014) and a joyous celebration of the impossibility of finding any such thing. Every time we get a glimpse of Doc’s detective notebook, he’s desperately trying to catch up to his own perceptions: “Paranoia alert,” he scribbles at one point, and later “NOT hallucinating.” We need to remain on paranoia alert, because our fears are justified even if the grand schemes can never be discerned in full. And we’re not hallucinating; America really is this weird.