The story of Jesus' conception and birth is deeply beholden to Hellenistic tradition. A religious scholar explains 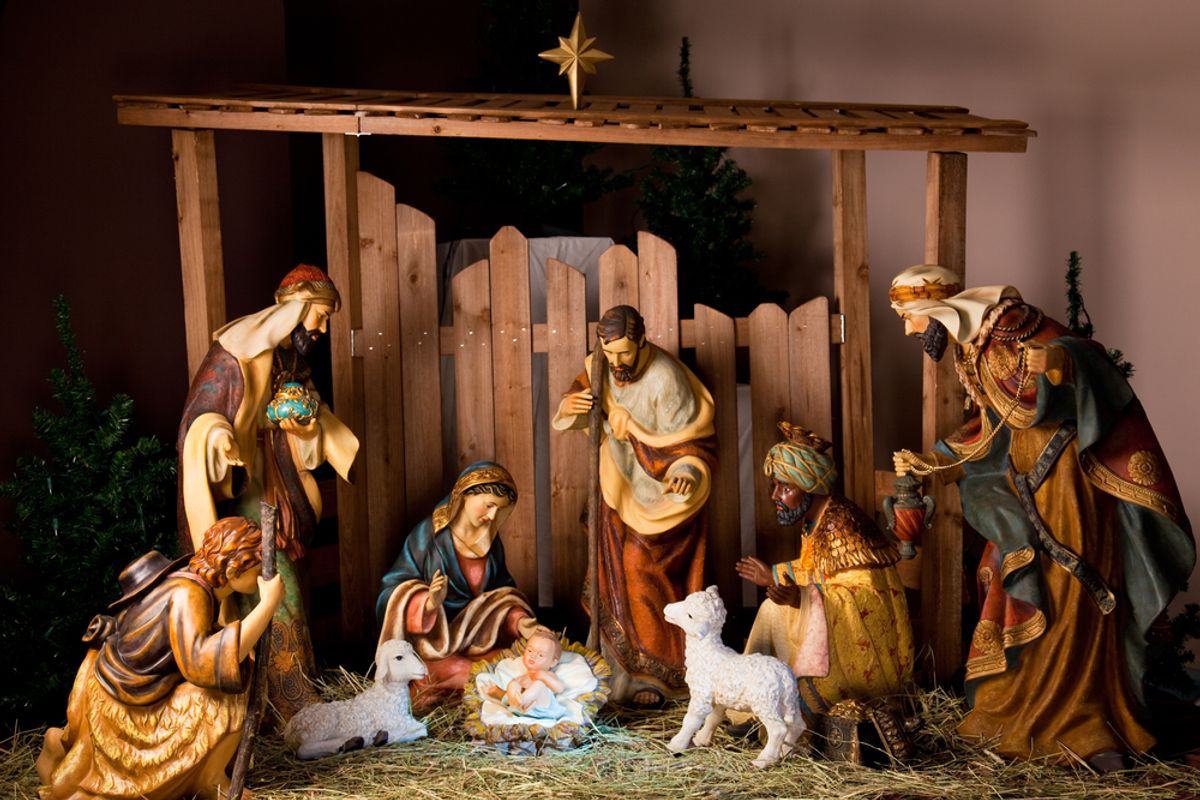 Valerie Tarico interviews Dr. Tony Nugent, scholar of world religions. Dr. Nugent is a symbologist, an expert in ancient symbols. He taught at Seattle University for fifteen years in the Department of Theology and Religious Studies and is an ordained Presbyterian minister.

Many Americans have heard that December 25 was a birthday of Roman gods long before it was chosen to celebrate the birth of Jesus. Some people also know that our delightful mélange of Christmas festivities originated in ancient Norse, Roman and Druid traditions – or, in the case of Rudolph, on Madison Avenue. But where does the Christmas story itself come from: Jesus in the manger, the angels and wise men?

Nugent: The familiar Christmas story, including the virgin conception and birth of Jesus, is found in the gospels of Matthew and Luke. Scholars have pointed out that these stories are somewhat disconnected from other parts of these Gospels and the rest of the New Testament. In fact, by the time he is a young boy in the temple, Jesus’s parents seem to have forgotten the virgin birth. They act surprised by his odd behavior. There is never any other mention in the New Testament of these incredible events! These stories seem to be an afterthought, written later than the rest of the gospels that contain them. To make matters more interesting, the stories themselves have inconsistencies and ambiguities – contradictory genealogies, for example. Our Christmas story (singular) is actually a composite.

Or consider the idea that Mary is a virgin. The Greek writer of Matthew quotes Isaiah as saying: “a parthenos shall conceive and bear a child.” The Hebrew word in Isaiah is “almah,” which means simply “young woman.” But the Greek word parthenos can mean either a virgin or a young woman, and it got translated as “virgin.” Modern Bible translations have corrected this, but it is a central part of the Christmas story.

That’s a lot of added complications. If the rest of the New Testament doesn’t refer to these stories or need them, then how did we end up with them? Where do they come from?

Nugent: One part of the answer comes from Hellenistic culture. (It is no accident all New Testament books written in Greek.) In this tradition, when a man did something extraordinary there was the assumption that he did this because he was different, either divine or semi-divine. They would make up a story about how he came to be divine. Almost all Greek heroes were said to be born of a human woman and a god–even Alexander the Great, Augustus and Pythagoras.

The father typically was Zeus or Apollo. The god would come and sleep with the woman, pretending to be the husband or as a bolt of lightning, or some such. Greek mythology also shows up in the book of Genesis: the gods lusting after the women and coming down and mating with them.

Why were they added to the Christian story?

Nugent: Jewish Christians, the first Christians, didn’t believe in the virgin birth. They believed that Joseph was the biological father of Jesus. Part of their Christology was “adoptionism”–they thought Jesus was adopted as the unique son of God at some time later in life. There were disagreements about when – Mark suggests the baptism, Paul suggests the resurrection.

But Matthew and Luke think that the sonship of Jesus began at birth. And they want to tell a story that reinforces this point. Matthew and Luke are the source of the Christmas story as most of us learned it.

Why didn’t the writers do a better job of cleaning the contradictions?

Nugent: They did, some. This is called the “orthodox corruption of scripture.” But it appears that these birth stories were added toward the end, so scripture got frozen before they could get integrated.

I was raised that the bible was the literally perfect, “inerrant” word of God, essentially dictated by God to the writers. What you are saying about the Christmas story sure calls into question this point of view.

Nugent: Which Bible?! There are thousands of manuscript variations. Most biblical stories are probably fiction, not non-fiction. They are mythology in the deepest sense of the word. But we need to get beyond the issue of whether biblical reports happened in the historical, physical sense to understand what they mean spiritually and mythically.

Ok. Back to Christmas. Of all the images from the Christmas story, the one that people fall in love with most is angels. The Christmas story is full of angels, beings of light. Is this because of the solstice tradition?

Nugent: Actually it comes from the Hebrew Bible, the Jewish scriptures that were eventually adopted into the Christian Bible as the Old Testament. It also comes from the Jewish literature written between the Old and New Testaments that didn’t get into the biblical canon. Some of these are even quoted in the New Testament, for example Enoch, from the 2nd Century BC. It’s all about angels.

What are angels in these stories? Who are they?

Nugent: The Bible calls them the sons of God, the Divine Council. The word used for God in parts of the Hebrew Bible, Elohim, is plural implying a family of deities. Angels are the lesser gods of the deposed pantheon of ancient Israel. They are under the rulership of Yahweh. Together with Yahweh they are part of Elohim, a plural word that we translate “God” in the book of Genesis. Elohim/God says “Let us make humans in our image.” Christians understand this to refer to the trinity, but that is a later interpretation. These angels came from the ancient pantheons of Mesopotamia and Egypt. Many of these gods come from stars. There is a strong astral dimension. “Heavenly Hosts” are stars.

The Luke story focuses on one angel specifically: Gabriel. Is he the archangel?

Nugent: Gabriel is the Angel of the Lord. He is one of two angels who are named in the Jewish canon and the Christian canon outside of the apocrypha: Gabriel and Michael. They are the angels of mercy and judgment. Gabriel means “Strong One of El.” He is first named in Daniel.

f you go into an Eastern Orthodox church you have two icons on the north and south. Michael is on the North to fight with Satan who lives there. Gabriel is on the south. He is more like what the angels originally were, which is messengers of the gods. That is what angel means. The idea that God has a special messenger is exactly what we read about in the Middle Eastern mythologies. Each of the earlier gods has his own special messenger. Enki, who becomes Yaweh, has Isimud. The goddess Inana has Ninshubur. Each high god will have an envoy or assistant, who is a lesser god. The angel of the lord is the same thing. The distinction between angels and gods came later.

So Gabriel is a star person? Or one of those semi-divine descendants of gods and women.

Nugent: He is one of the gods who would come down to earth.

Why do you say that?

Nugent: The offspring of the gods mating with women are called Gaborim–from the same root as Gabriel. In the second century, Gabriel appears in the Epistula Apostolorum. It talks about Jesus and these secret teachings that he gave to his apostles after the resurrection. One of the secrets is that he is actually Gabriel. After Gabriel took on flesh and united with Mary, then he becomes Jesus. The idea that Christ was an angel was extremely popular in the early church. Later we find this really strict separation between humans and angels; between gods and angels. (more)

We have time for just one more favorite Christmas story: The Star of Bethlehem and the Magi.

Nugent: The Magi are astrologers. They are Zoroastrian priests. Just to the east of the Roman Empire was the Persian Empire, which was Zoroastrian. They see this star at its rising (the better translations don’t say in the East). The astrologers paid a lot of attention to this. It is likely that what this refers to was a heliacal rising, which is the first time that a star appears over the horizon during the course of a year. They thought this was a sign of the Jewish messiah. Scholars speculate that they would have been living in Babylon, where there were lots of Jewish merchants. The Jews had been there from the time of the Jewish exile from Babylonia. We have cuneiform records from them.

Are you assuming that this story is historical?

Nugent: Think of it as a frog and pond. The pond is real, the frog is not. They are fictional stories in a real setting. They don’t always get the details of the setting right, but they are fictional characters in real places. The Magi follow their star from Jerusalem to Bethlehem. The author has in mind a real star that would be in front of you in this situation. It would have to be a star in the far southern sky. Remember what I said about the Heavenly Host being stars? The star in Matthew and the angel in Luke are two variants of the same mythology.

My former fundamentalist head is spinning. Is there anything else you’d like to say in closing?

Nugent: We need to be able to appreciate these stories as myths, rather than literal histories. When you understand where they come from, then you can understand their spiritual significance for the writers and for us.

This interview first appeared at the Huffington Post, December 25, 2008.