They're flawless: Why Beyoncé and Nicki Minaj had 2014's best female celebrity friendship 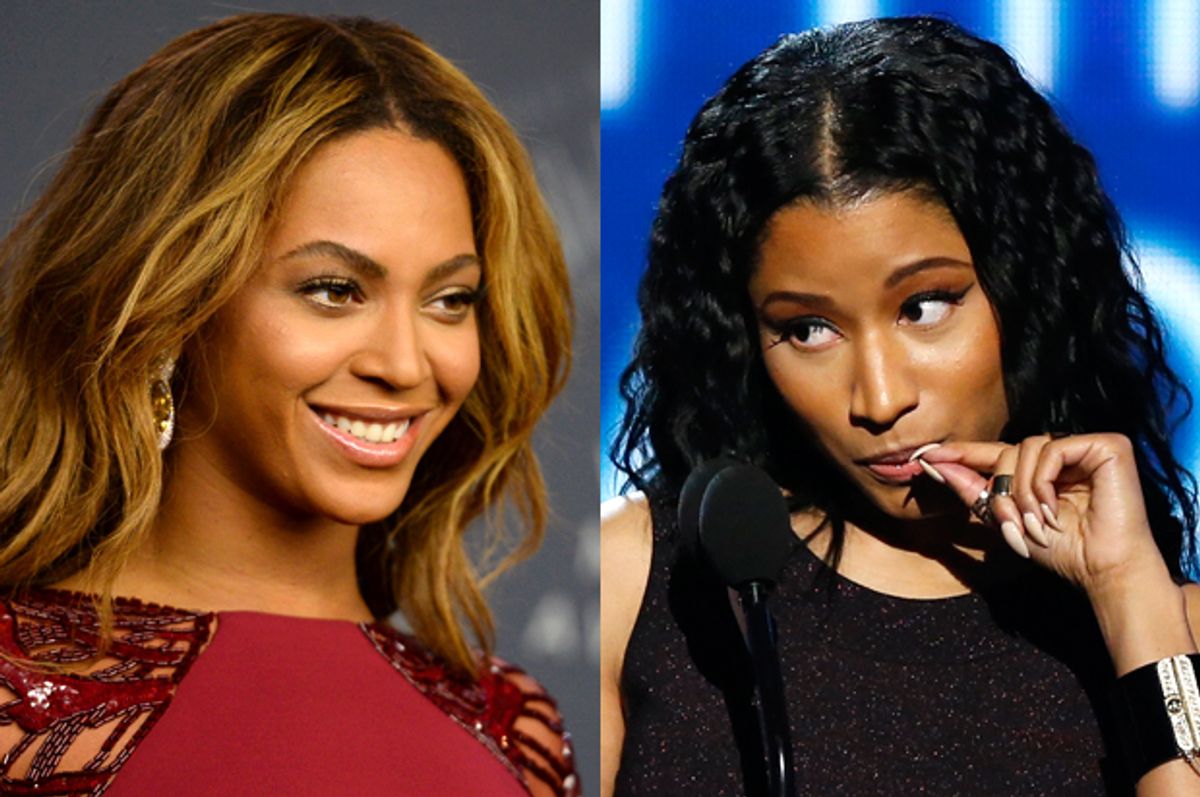 This has been a banner year for female celebrity camaraderie. Amy Poehler and Tina Fey are making a movie about sisterhood and are hosting the Golden Globes, again, while Abbi and Ilana's platonic love affair, both on "Broad City" and in real life, feels more genuine than anything else on TV this year. Perhaps most famously, Taylor Swift has renounced her search for Prince Charming (sort of) in favor of assembling an all-female BFF-army that would make the Spice Girls quake in their platforms. But perhaps the greatest female relationship the world has witnessed in 2014 is the alliance of Nicki Minaj and Beyoncé. With the release of the "Flawless" remix, and yesterday’s “Feeling Myself,” this year has gifted us with one of the greatest and most unlikely female team-ups in the biz.

I say unlikely, because neither Nicki nor Beyoncé is historically known for their willingness to share the stage with other women. While both are feminist icons, they both come across as guys’ girls: Nicki will happily share a track with Drake or Lil' Wayne, but most of her interactions with other famous women involve throwing shade (the handy resource "Wiki Minaj" lists 85 male collaborators compared to 27 females). Beyoncé, meanwhile, has been something of an island since her notoriously fraught Destiny’s Child partnership, and all the artists she shared a track with on "Beyoncé” -- Drake, Jay Z, Frank Ocean — were guys (Blue Ivy's cooing and Chimamanda Ngozi Adichie's TED talk excerpt not withstanding). While both Nicki and Beyoncé pay lip service to female solidarity, each simultaneously projects an aura of holier-than-thou detachment. It’s no coincidence that both have co-opted the label “Queen" -- their cultural vantage points are those of women elevated on a royal pedestals, separate from the average chicks below.

This has been an unusual year for female collaborations in a professional sense: As New York Magazine music critic Lindsay Zoladz pointed out in a piece earlier this year, this was the year the female buddy anthem came into its own: Iggy Azalea and Charli XCX’s "Fancy," Ariana Grande and Iggy Azalea's "Problem," Ariana Grande, Jessie J. and Minaj's "Bang Bang," etc. This wave of girl-power tracks is particularly unusual because of how rare these sorts of collaborations have been historically. As Zoladz writes, "The preferred pronoun is I rather than we; self-empowerment is held as a higher virtue than solidarity; the most blissful fantasy is the one where you feel like the only girl in the world.” And the Nicki/Beyoncé team-up might be the most significant of all, simply because of the power each wields: These women are the two most important female figures in the male-dominated hip hop industry, and instead of competing with each other, they've joined forces, working to bring out the best in each other (As Nicki described Beyoncé’s directions to her while recording the "Flawless" remix: “Do your thing! Don’t hold back! Go in!”) Seeing them work together is evidence that two badass women working together can be even better than one, and it's no coincidence that both "Feeling Myself" and "Flawless" are odes to how awesome they both are.

But it wouldn’t be the same if they were purely professional collaborators. We love collaborations between famous women, but more than that, we love to believe that there’s an authentic kinship beneath it. Amy and Tina got elevated to mythological status not because they made “Baby Mama" together, but because they so clearly loved each other and supported each other offscreen, and because their relationship felt recognizable to us. While we go nuts for celebrity friendships in general (Patrick Stewart and Ian McKellan, Harrison and McConaughey, etc), female friendships tend to grab our attention because they go against the traditional stereotype about successful women, which is that they view one another primarily as competitors, or that they are anomalies, lone crusaders in a sea of men (think of the rumor that Angelina couldn’t find a bridesmaid because she had no female friends, or Megan Fox confessing “I don’t have a ton of female friends—I have one. Her name is Mindy and she’s a facialist.”)

Unlike, say, Taylor Swift, whose Instagram is overflowing with scenes of female BFF-dom, taking cooking classes with Lorde or having sleepovers with Lena Dunham, neither Nicki nor Beyoncé projects an image of sociability. Beyoncé’s Instagram feed is dominated with photos of her immediate family or of solo shots, while Nicki’s social media accounts likewise consist largely of self-promotional selfies or creative disses of fellow stars. Yet four days ago, something very unusual happened on Beyonce’s tumblr, when she updated the page to feature Nicki’s high school portrait with the caption “Happy birthday Onika,” her birth name. Bey very rarely gives shout-outs, and this one felt more like a tribute you’d give one of your high school friends than a strategic shoutout to a business collaborator. The "Flawless remix" too, had a similarly homemade, conspiring-BFFs quality to it: The cover was as mosaic of lo-def selfies, and the track was rolled out in the middle of the night as a surprise.

The notoriously terse Minaj responded gushingly to the birthday shoutout, reposting and writing "she's #EVERYTHING. PERIOD. THE END...no, seriously, I love her. Who does stuff like this? Lol. Queen." And it’s not the first time Nicki has broadcast their friendship, sharing a picture of a diamond necklace reading ‘Flawless’ that Beyoncé gave her at the VMAs (a friendship necklace?) and tweeting about sweet interactions with her daughter Blue Ivy. This is a rare public soft side from Minaj, but it’s so nice to see: Humility and warmth  look good on her (so does humor, and her homage to Beyoncé on SNL last week was a pitch-perfect mix of snark and affection). Whether or not the relationship has a performative element — which of course it does, in part — it's still our favorite female celebrity friendship of the year.