"Why are U punishing me": Amy Pascal and Scott Rudin are the break-out stars of the Sony email chain reality show 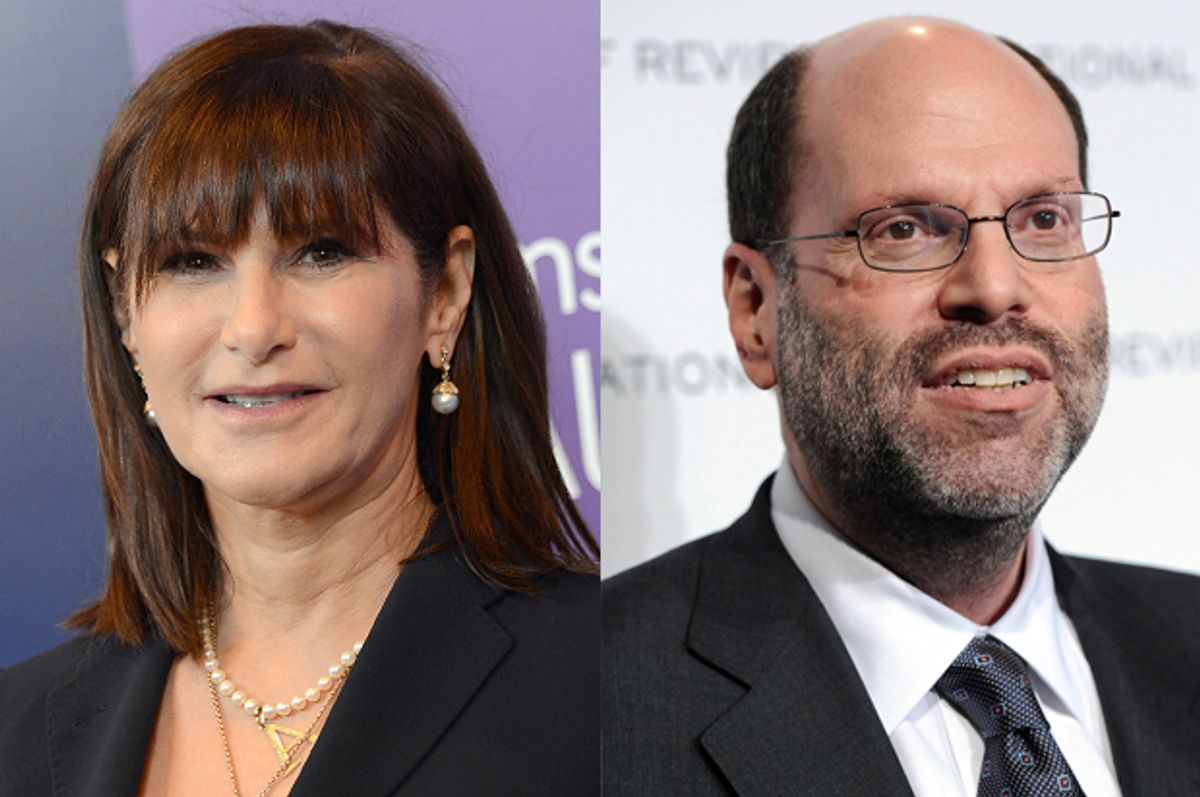 FILE - In this Jan. 11, 2011 file photo, producer Scott Rudin attends The National Board of Review of Motion Pictures awards gala at Cipriani's 42nd Street in New York. Rudin, the high-powered producer at the center of the latest embarrassment stemming from the Sony hacking scandal, has apologized for remarks he made in leaked emails. In the series of private emails obtained by Gawker and Buzzfeed this week, Rudin, corresponding with Sony Pictures Entertainment co-chairman Amy Pascal, called "Unbroken" director Angelina Jolie a "spoiled brat" and made jokes about President Barack Obama's race and presumed taste in movies. (AP Photo/Evan Agostini, File) (Evan Agostini)
--

It shouldn’t be a surprise that the people in charge of entertainment are also highly entertaining themselves, but workplace reality shows never let us as far beyond the curtain as the emails from Hollywood executives leaked after the anonymous hack on Sony have. Thanks to their parts in several heated exchanges with each other and film executives, Sony Pictures co-chair Amy Pascal and producer Scott Rudin have gone from an off-screen magnates to unwitting reality stars.

Gossip about powerful people has always been titillating, and these aren’t mere third-hand blind items. They’re straight from the sources, unedited. Who hasn’t yet been thrown under the bus by the Sony hack? Angelina Jolie is a minimally talented spoiled brat, Michael Fassbender’s not a star yet, Adam Driver is a terrible idea for “Star Wars,” Adam Sandler movies are mundane and formulaic. Even the president, while attending “this stupid Jeffrey [Katzenberg fundraising] breakfast,” has to contend with a series of hypothetical dumb questions from Pascal, as suggested by Rudin, of which films starring black men he might like best. “I bet he likes Kevin Hart,” Rudin deadpans.

The jokes about Obama are stupid and tacky and racially charged, and obviously written with no thought to them ever being read by anyone other than each other. Pascal and Rudin both apologized yesterday. “The content of my emails to Scott were insensitive and inappropriate but are not an accurate reflection of who I am,” Pascal wrote. “Although this was a private communication that was stolen, I accept full responsibility for what I wrote and apologize to everyone who was offended.”

What this apology really reveals is that the only person in the world Pascal and Rudin are afraid of insulting is the leader of the free world. Everyone else, apparently, can suck it. Watching powerful people behave badly is riveting (see: two seasons of “House of Cards”), because their power insulates them from the consequences that most normal people would probably face — a swift and public sacking — if they dragged their workplace into racially charged jokes about the president of the United States.

Add in a side of how the sausage is made — for real, not the sanitized versions we get in magazine stories and commentary tracks — and the story becomes irresistible. When Pascal melts down over Rudin taking his Steve Jobs biopic to Universal (“Why are U punishing me”), Rudin’s warnings to her to not cross any lines she can’t “uncross” are both barbed and oddly tender.

And witness Pascal, studio executive Clint Culpepper and Sony Entertainment CEO Michael Lynton discussing why they don’t want to pay Hart more to promote his latest film on social media — above and beyond the regular interview circuit included in Hart’s $3 million contract. Their exchange couldn’t have been scripted better in a writers’ room. Culpepper throws down the gauntlet, even, with “I’m not saying he’s a whore, but he’s a whore,” a reality-show catchphrase worthy of competing with “I’m not here to make friends.” (Hart fired back on Instagram, of course.)

Culpepper continued: “I never cease to be amazed at the chutzpah of actors. And directors. And writers. Have I left anyone out?”

Lynton: “I am including myself.”

These deadpan, rapid-fire exchanges are the press conference RiffTrax of our dreams.

Of course, not all of the Sony hack documents are frivolous. More than 47,000 Social Security numbers were also released. Among them, writer/director/producer Judd Apatow’s, so it wasn’t surprising when Apatow took to Twitter yesterday to decry the publication of leaked documents -- but then he upped the ante with a comparison to JLaw's hacked photos:

Releasing private Sony e mails to hurt people is the same as releasing nude photos of Jennifer Lawrence. Why are they ok to print?

.@m0n1c4y1 things are either private & it's theft to steal and release them or they are not. Whether it is a photo of my dick or email.

Of course, some of the emails exchanged with Sony higher-ups just reveal famous people to be reasonable people just doing their jobs. There’s nothing embarrassing about Paul Reiser’s email to Sony Pictures Television president Steve Mosko asking him to look into music rights issues that are holding up several seasons of Reiser’s '90s sitcom “Mad About You” from being released on DVD and iTunes, for example. There’s probably something to be said for just conducting yourself like a decent person, whether in email or on record with the media, but who would binge-watch that show?