A "canyon of pollution": Why Paris is waging a war against driving 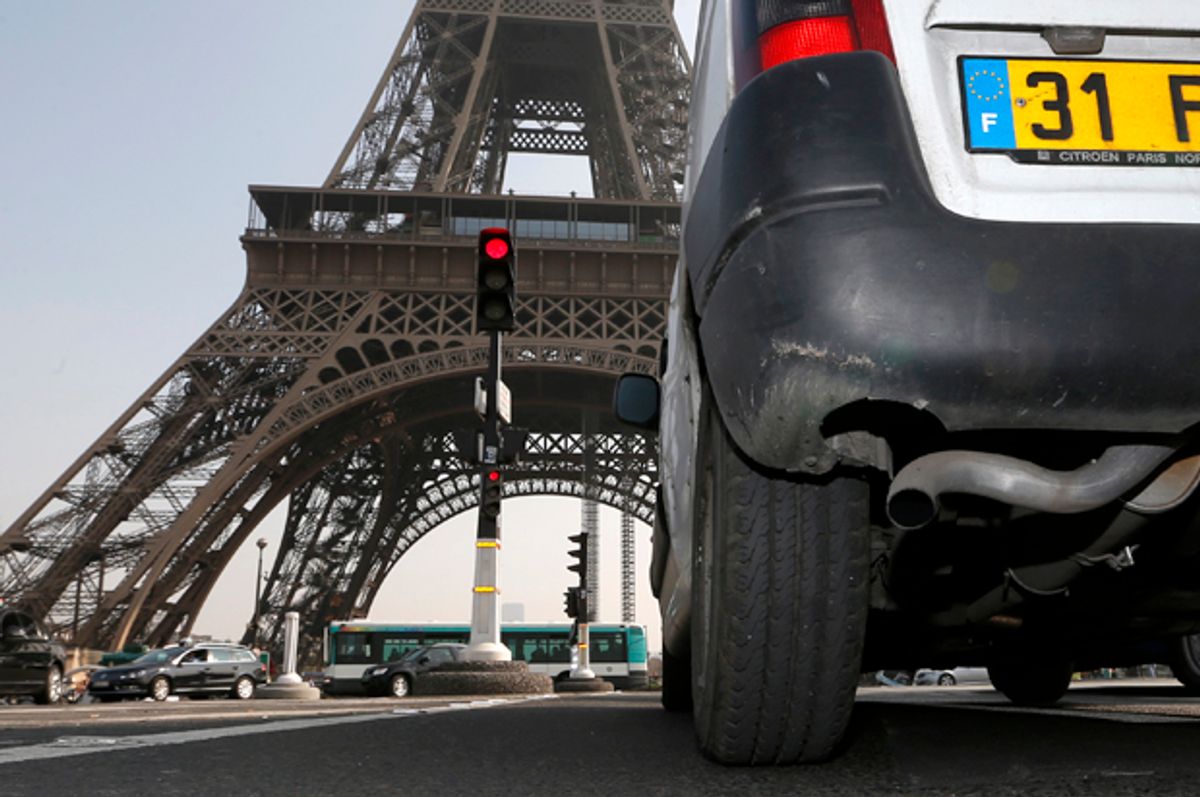 The mayor is supposed to be a problem-solver and a cheerleader, comfortable with both honest assessment and hometown boosterism

The two roles come into conflict now and again. And yet it still seems strange to hear Anne Hidalgo, the mayor of Paris, call the Champs-Elysées a “canyon of pollution” — as she did in an interview last week.

The grand boulevard is one of the world’s most famous streets and a major tourist attraction in its own right. It’s an urban design archetype with dozens of imitators, from Budapest to Philadelphia. And it’s also one of the worst places in Paris to take a breath of fresh air.

Hidalgo is offering some constructive criticism. In an interview on Sunday, the socialist mayor outlined a radical plan to reduce automobile use in the French capital, which will be introduced in full next month.

In addition to removing all but hybrid and electric cars from the Champs-Elysées, the Rue de Rivoli, and other major corridors, Hidalgo wants to ban all diesel vehicles from Paris by 2020. Trucks not headed for a destination in Paris will be forbidden from using Parisian roads. The speed limit will drop to 30 km/h on all but a few big streets. The mileage of the city’s bike lane network will double.

The central four arrondissements will be restricted to taxis, buses, delivery trucks and emergency vehicles. Only residents will be allowed to operate private cars.

It’s not that Paris needs to reduce traffic for mobility, raise money with fines and tolls, or discourage driving in the name of global sustainability — though all those may be beneficial side effects. The pressing problem is local air pollution, and Hidalgo’s plan to fight it may be the most drastic anti-car policy undertaken in a major city.

Air quality in the City of Light has been of increasing concern. Particle pollution exceeds the European Union’s suggested level of PM 10 content between 32 and 130 days a year, depending on one’s location within the city. Hidalgo likes to say that Parisians lose six months off their lives compared to their rural compatriots.

Hidalgo was elected in March, two weeks after a particularly bad cloud of smog disrupted life in the capital. The state activated stringent emergency measures. Mass transit, bike share and car share were free. Alternate driving days were instituted inside the city.

It worked — traffic fell and pollution followed. But Hidalgo would like to avoid making such crises an annual occurrence. She talked about the need to shift away from diesel fuel on the campaign. But making that a citywide reality is a huge challenge: 80 percent of French cars run on diesel.

That she feels she has the political will to do so reflects a long-term mobility shift underway in the city. In 2001, 40 percent of Parisians didn’t own a car. Today, Hidalgo says, it’s 60 percent. For that, she can thank her predecessor, Bertrand Delanoe, who established the city’s much-imitated bike share system, and a car share system, and turned a riverside highway into a beach every summer. Traffic dropped by 25 percent.

Hidalgo’s carless majority marks an important moment in municipal street policy. Just as the much-maligned Parisian “donut” — a wealthy center surrounded by poorer suburbs — provided a warning for cities like San Francisco and London; so too the city’s shift from the car may be a bellwether.

Unlike her counterpart in New York, Hidalgo doesn’t have to assuage constituents in car-dependent, low-density neighborhoods. She can afford to be openly radical. Even in Paris, with its outsize influence over France, achieving a ban on diesel would be a striking gesture of urban power and could reverberate throughout the French automobile industry.

But she won’t be able to enact her reforms without a larger consensus. This is, in part, a political issue: Without state approval, she can’t ban diesel vehicles from inside Paris or, to take another of her ideas, use commuter rail tracks to transport freight. But it’s also an environmental reality. Paris is a hub, but twice as many people live in the inner suburbs; there are 200,000 more jobs there as well. Airparif, the agency that monitors regional air quality, has said that to be effective, the ban on diesel vehicles would need to extend to the A-86, the ring road three miles beyond the city’s boundaries.

Hidalgo has said she will meet with the mayors of those suburban cities. Many of them are as dense if not denser than central Paris. But they aren’t under the inner city’s blanket of metro stations. The number of car trips per person has dropped in the region at large, but only slightly, from 1.54 trips per day in 2001 to 1.46 in 2010.

The ongoing expansion of the regional transport network should sweeten the deal. (Another huge stretch of suburban tramway opened on Saturday.) Hidalgo has also spoken about making exceptions for low-income drivers and distributing credits for upgrading vehicles. She recently introduced Utilib’, a car-sharing service intended for the transport of goods. She has pledged to expand the passenger-focused, car-sharing service Autolib’.

Whether or not Hidalgo can bring the Petite Couronne municipalities along with her, her scheme for Paris demonstrates how the megacity has been divorced from its national context. The plan to pedestrianize central Paris is similar to a measure that will debut in Madrid next month. The push to rethink freight transport is similar to efforts undertaken by Michael Bloomberg in New York. Tracking what types of vehicles enter the city is an idea indebted to the success of London’s congestion pricing initiative.

It’s not surprising that these metropolises share problems and solutions across different national cultures and legal frameworks. More interesting is the extent to which smaller, regional cities imitate them, diffusing policy innovations across the country.

In France, that does not seem to be happening. In fact, many smaller French cities are moving in the opposite direction, bringing cars back to central districts. In provincial centers like Lille, Angers and Saint-Etienne – and many smaller cities – authorities fear that exiling cars may have hurt the ability of urban shops to compete with their suburban counterparts. (Sound familiar? Many American cities share the philosophy.)

It’s not a worry on the Champs-Elysées. Within a few years, the avenue will no longer resemble the smoggy backdrop from "Breathless." The transformation won’t be as novel as you might think: Most of the grand urban boulevards, including this one, were designed before cars existed. It’s a testament to their charm that people have continued to enjoy such streets in spite of the noise, traffic and exhaust.

Just think how nice the avenue will be without them.