It happens all too often. Our judicial system heavily favors the prosecution in pre-trial negotiations 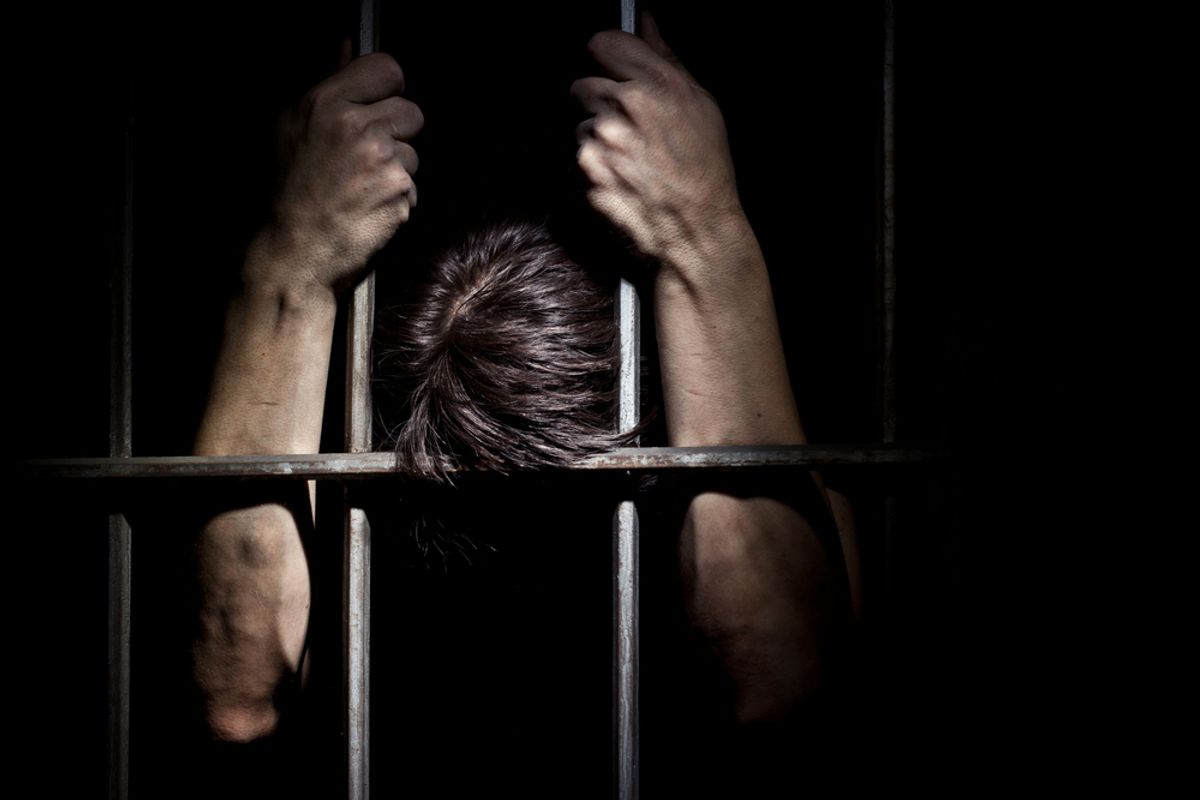 On Sept. 18, 2000, Walter Bowman was shot in the chest during an armed burglary at his home, dying shortly after on the way to the hospital. Three armed men wearing gloves and bandanas had entered the Bowman residence while the family was watching football, shot Bowman amidst the confusion and fled the scene immediately.

Tips led police to concentrate on six possible suspects, including Kenneth Kagonyera and Robert Wilcoxson. After a series of interrogations, three of the suspects implicated themselves and various combinations of the others. Eventually, Kagonyera, Wilcoxson and three others pled guilty and were sent to jail for Bowman’s murder. However, there was a problem with their admissions of guilt: they appear to have been entirely untrue.

DNA evidence found on the bandanas and gloves excluded all six of the defendants, and in 2003 another man, Robert Rutherford, came forward and confessed to committing the crime with two others. DNA from the bandanas implicated Rutherford, but this information wasn’t given to Wilcoxson, Kagonyera or their lawyers. It took until Sept. 22, 2011 for Wilcoxson and Kagonyera, the only two still serving time for the crime, to be exonerated and released from jail.

So if these five were innocent, why would they agree to plead guilty and serve jail time instead of going to trial to fight for their side of the story?

Like many across the U.S., these men were victims of a judicial system that has come to heavily favor the prosecution over defendants in pre-trial negotiations. Harsh sentences are often used as a potent threat to push defendants to agree to plea bargains in order to avoid long prison terms or the death penalty. Kagonyera and Wilcoxson, for example, pleaded guilty only to avoid the possibility of a death sentence, according to their lawyers. This process is particularly evident in cases involving drugs.

Take, for example, the case of Lulzim Kupa, who was indicted in early 2011 on charges of drug trafficking that carried a mandatory minimum sentence of 10 years. He decided to decline a plea deal that would have withdrawn the mandatory sentence, instead opting to face a jury trial. However, just weeks before the trial was to begin, the prosecution filed information about two prior marijuana-trafficking felonies, despite having known about Kupa’s prior convictions long before. Kupa now faced the prospect of life in prison without parole. The government then offered another plea bargain, saying they would withdraw the information about Kupa’s prior convictions if he pled guilty. Kupa consented, pled guilty and was sentenced to 11 years in prison on August 9, 2013.

Jury trials in the U.S. have become incredibly rare. Practically all cases that are not dismissed are settled in plea bargains. In some cases, even innocent people like Kagonyera and Wilcoxson plead guilty to avoid harsh sentences. Conservative estimates place the number of defendants who plead guilty to crimes they didn’t commit in the tens of thousands. Of the 1476 exonerations tracked by the University of Michigan Law School’s National Registry of Exonerations since 1989, 13 percent of innocent defendants provided false confessions.

In an exclusive interview, U.S. District Judge Jed S. Rakoff of the Southern District of New York agreed to discuss the role that plea bargains play in pressuring defendants to enter guilty pleas when they are in fact innocent. Rakoff, who Rolling Stone journalist Matt Taibbi described as “a sort of legal hero of our time,” has been a vocal critic of the plea bargaining system and U.S. sentencing guidelines. He has recently written about these issues for The New York Review of Books in an article titled “Why Innocent People Plead Guilty.”

Dusty Christensen: Of federal cases that aren't dismissed, over 97 percent are resolved in plea bargains before the case ever goes to trial. In state cases, the number is about 94 percent. How has this disappearance of jury trials affected the impartiality of America's judicial system? Why is this such a problem?

Jed S. Rakoff: Because the cases are resolved in negotiations between the prosecutor and the defense counsel, in which the prosecutor holds most of the power, the criminal justice system has become one-sided. This is a problem because the negotiations are secret and not subject to meaningful judicial review, the imbalance in negotiating power leads to over-incarceration (with 2.2 million Americans presently imprisoned), and in some cases, innocent people plead guilty to escape the high risks attendant on going to trial in an era of mandatory minimum sentences and severe sentencing guidelines.

DC: In your recent piece for the New York Review of Books, you conservatively estimate that 20,000 or more people could potentially be in prison because they were pressured into taking a plea deal for a crime they did not commit. How do prosecutors use mandatory sentencing and sentencing guidelines as powerful weapons that force many defendants to take plea deals instead of going to trial?

JSR: The average sentence for defendants who go to trial and are convicted is three times the average sentence for similar defendants who plead guilty. A defendant who is actually innocent but who was involved in suspicious circumstances may decide to "reduce his risk" by pleading guilty to a lesser offense; or the defendant, especially if young, uneducated or of low intelligence, may simply not be able to face the stress of a trial where, if convicted, he will face many years in prison.

DC: How has the war on drugs affected this trend?

JSR: Drug offenses account for more than a third of the federal criminal docket and a large percentage of the state criminal dockets as well, and some of the most severe mandatory minimum sentencing requirements are in drug cases.

DC: Slashed judicial budgets across the country have left many courts overburdened and backlogged, unable to provide the basic Sixth Amendment right to a speedy trial as people sometimes wait years for a chance in court. How does this further incentivize the justice system to push for plea deals?

JSR: This is certainly a contributing factor, especially where a defendant has been denied bail, and so is already doing time while just waiting for trial.

DC: How do the issues of class and race fit into this equation of who receives an equitable plea bargain or their day in court?

JSR: Regarding class, lawyers and investigators have become so expensive that only genuinely wealthy defendants can afford the kinds of lawyers who can mount an effective defense in the face of suspicious circumstances. Conversely, legal aid lawyers are often overburdened and therefore are predisposed to cut a deal.

As for race, the federal sentencing guidelines discriminate, albeit unintentionally, against African Americans, especially in drug cases. Thus, for example, crack cocaine offenses have been punished more severely than powder cocaine offenses, even though both drugs are chemically identical. But since crack cocaine is mostly sold in African-American communities, while powder cocaine is mostly sold to whites or Hispanics, the result is that African Americans are punished more severely for offenses that are substantially identical to those for which whites and Hispanics are punished less severely.

DC: As a counterweight to the current system, you advocate for experimenting with a system that would involve magistrate judges in the plea-bargaining process as a neutral third party. How would this mitigate the abuses of the current system? What would keep these judges from becoming part of the same system that heavily favors the prosecution over the defense?

JSR: Judges are trained to be impartial, and their involvement in plea bargaining at an early stage would at least lead to fairer bargains, and hopefully would expose undue prosecutorial pressure before it leads an innocent person to plead guilty. Having said that, I am only recommending a pilot program to begin with, so that we can see whether this suggestion really works before we adopt it across the board.

DC: What jurisdictions have you seen begin to challenge this plea-bargaining system? Have they seen any success, to your knowledge?

JSR: I'm not aware of any successful challenges so far.

DC: Attorney General Eric Holder took some steps to reduce mandatory sentences for certain offenses, but he was met with stiff opposition and some critics say he didn't go far enough. What recommendations for correcting the plea-bargaining system would you give to the country's next attorney general?

JSR: We cannot continue a system of prosecutor-induced mass incarcerations and expect to maintain our constitutional ideals of fairness and justice for all. The best solution would be a substantial reduction in mandatory minimum sentences and severe sentencing guidelines, but this will only occur if the attorney general and other high-ranking officials and politicians educate the public as to the evils, and costs, involved in continuing a policy of "lock 'em up forever."