From "A Royal Christmas" to "Merry Inkmas": Your guide to the hellscape of Christmas-themed programming 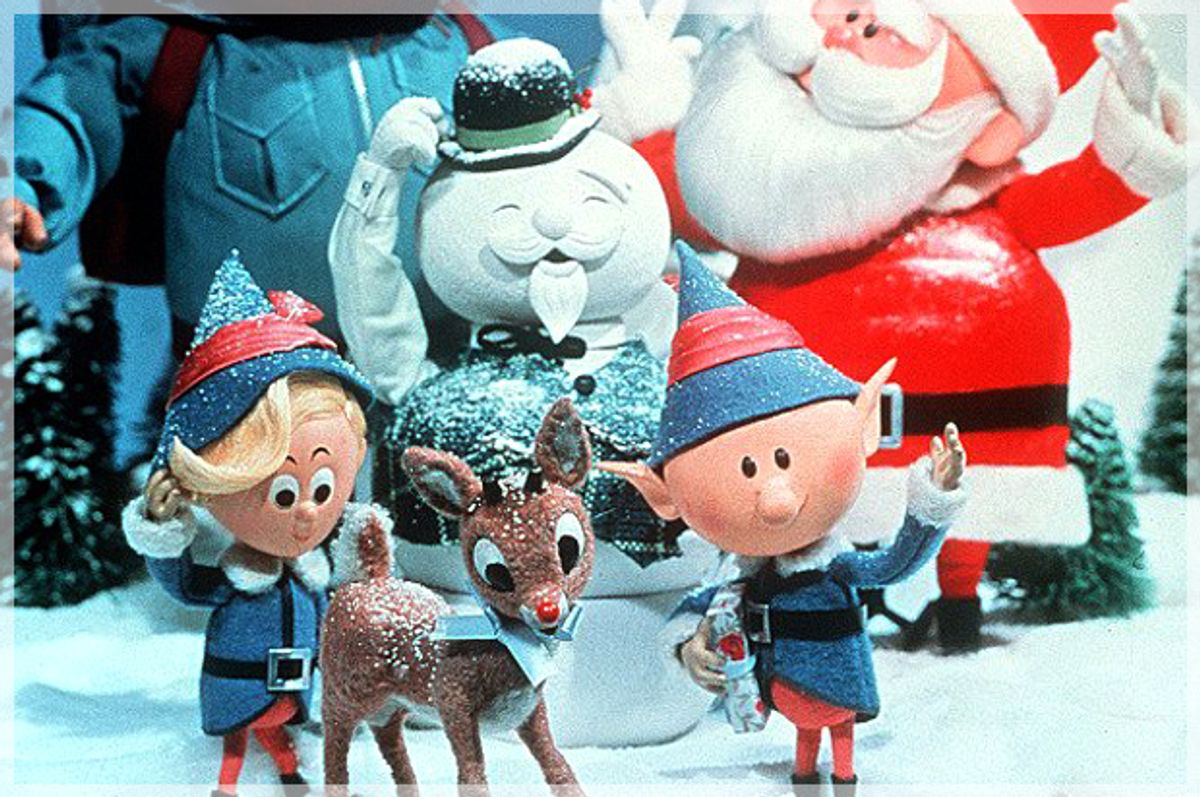 This holiday season, prepare to be deluged with a truly unconscionable amount of Christmas-themed programming. It's a yearly ritual: every single show on every single network contorts itself to broadcast something Christmassy in a crazed attempt to cash in on every trace of holiday spirit. So this year, we've prepared this handy guide to the yuletide TV madness:

It really wouldn’t be Christmas without a bunch of saccharine, low-budget original films that almost always seem to involve both death and a romance. “A Perfect Christmas List,” airing on Dec. 14 on Ion, promises tears and laughter as estranged daughter Sara is pulled back to her hometown by her grandmother’s illness, even though she and her mother never come together for Christmas anymore. Along the way there’s a handsome doctor and her dying grandmother’s last wish. I think you can guess how this one ends.

The narrative of a woman finding herself in a small town is also the story of Hallmark’s “The Christmas Parade,” airing on the same night. A morning show anchor goes off the deep end when her fiancé turns out to be dating someone else; somehow this ends up with her doing community service in a small town, where a handsome artist convinces her to help him make a Christmas float — for the Christmas parade — for the children. How does one part of this film even connect to each other? Does the small-town Christmas parade end up being the subject of her morning show’s special? Isn’t it odd that so many Christmas narratives place the small town and the city in opposition, when in all likelihood, the majority of Americans probably live in neither, given suburban sprawl? Anyway, who cares? We have a parade to put on!

If Hallmark’s script appears a little thin, that’s because the network has 12 new Christmas films. “One Starry Christmas,” about an aspiring astronomy professor; “The Nine Lives Of Christmas,” starring former Superman Brandon Routh, as a hard-hearted fireman who adopts a stray cat and opens himself up to love; “A Cookie Cutter Christmas,” about two rival teachers who cross swords over a handsome single dad and a cookie bake-off; “A Royal Christmas,” which is a Christmas knockoff of “The Prince & Me,” which is itself a knockoff of “The Princess Diaries,” but look, it stars Jane Seymour; “The Christmas Shepherd,” about a lonely woman and a single dad and daughter who all adopt the same dog; and at least four films with angels walking around on earth in some form, mostly to set white people up in small-town romances. Fortunately, most of Hallmark’s Christmas films have aired already: You don’t have to be scared anymore.

Not so for Lifetime’s Holiday programming, which is similarly extensive. But where Hallmark is focusing a lot of its efforts on recent originals, Lifetime’s got a huge back catalog of holiday films, having been in the business of B-movies since time immemorial. The upside of these is that amid the terrible scripts are forgotten performances from actors like Sarah Paulson, in “A Christmas Wedding,” Luke Perry in “A Very Merry Daughter of the Bride,” and Anna Chlumsky and Kristen Chenowith in “12 Men of Christmas.” Repeats of all are playing all month.

And Lifetime’s contribution to its holiday canon this year is “Wishin’ and Hopin’,” starring Molly Ringwald, Chevy Chase, Cheri Oteri and — seriously — Meat Loaf. Chase narrates the story of a 10-year-old boy’s Christmas pageant, where Ringwald shows up as a substitute teacher to a small town. Does it even matter what happens next? It can’t — Meat Loaf is in it. Meat Loaf is in it.

Yet it is unlikely that any film, past, present or future, will match the absurdity and wonder of “Christmas Icetastrophe,” on Syfy, in which “an asteroid strikes a small town preparing for Christmas, triggering an explosive wave of ice crystals that threatens to freeze all life on Earth.” That’s on Dec. 20, and you should probably set your DVRs immediately.

The Brits sure do love their Christmas specials — existing shows that air a special, longer episode on Christmas, often about Christmas, with all the same beloved characters. PBS will have “Call the Midwife” and “Vicious”; BBC America will air the traditional “Doctor Who” Christmas episode. And DirecTV will be airing “Black Mirror’s" Christmas special, which, if the first two seasons are any indication, is bound to be very dark indeed.

Programs that involve live singing, sometimes by famous people, but sometimes just by whoever

Following up on the relative success of “Peter Pan Live!” will be two more productions just on NBC. First, on Dec. 16: “Elf: Buddy’s Musical Christmas,” where Jim Parsons will reprise the role popularized by Will Ferrell and add singing, because that is what it needed. It doesn’t appear to be live, at least; however, Jay Leno is in it, as are Matt Lauer and Mark Hamill. And on Dec. 17: “Michael Buble’s Christmas in New York,” featuring the pop singer joined with Barbara Streisand, Ariana Grande and Miss Piggy, followed by “The Sing-Off,” which is a special holiday-themed episode featuring people singing in competition (how original).

PBS offers up a far classier take on the live holiday music special on Dec. 19 with “Christmas With the Mormon Tabernacle Choir Featuring Deborah Voight and John Rhys-Davies,” which is exactly what it sounds like it would be. And CBS ties its performances in with stories of adoption and foster care in “Home for the Holidays,” one of the more purely heartwarming programs of the Christmas season. That’s also on Dec. 19, and features Jennifer Hudson, Train, Katharine McPhee and Earth, Wind, & Fire.

All of this, naturally, pales in comparison to anything termed “Jingle Ball”; and so the CW enters the fray with “The iHeartRadio Jingle Ball 2014” on Dec. 18, featuring the vocal stylings of Taylor Swift, Iggy Azalea and Maroon 5. What is it with Christmas and generic pop music, hmm?

The spirit of Christmas is Guy Fieri

There’s always a bunch of food programming tied into any holiday, but a week of hour-long “Diners, Drive-Ins, & Dives” is occasion for joy, naturally, as is holiday-themed episodes of “Guy’s Grocery Games,” including an episode called “Dashing Through the Aisles.” It’s a lot to take in, I know, but just go with it: Guy Fieri embodies everything essential about American Christmas. Right down to the Hawaiian shirts.

Unscripted programming is trotting out an awful lot of holiday specials this year, each one a bit more cringeworthy than the last. Travel’s got two episodes of visiting the exotic locale “Christmastown, U.S.A.” on Dec. 14; “Storage Wars” is airing a Christmas special on Dec. 16. TLC has a “Secret Santa” special on Dec. 14  that is two hours long on a journalist uncovering the truth behind quote-unquote “Christmas miracles.” Oh dear.

Animal Planet, in particular, is committing numerous offenses against the phrase “holiday special” — creating holiday episodes in existing semi-narrative reality shows about subjects only tangentially related to animals or the planet. This includes: a holiday episode for “Monsters Inside Me," on Dec. 18, which is the least appropriate show to do a holiday special for; “Tanked,” a show about aquariums, on Dec. 19; “Pit Bulls & Parolees,” which actually could be really heartwarming, on Dec. 20; and “North Woods Law,” about cops in Maine, on Dec. 21.  And on Christmas day, the network is airing a Very Special Episode of “Call of the Wildman,” “Turtleman Takes Manhattan,” a reprise of last year’s Christmas special. “Call of the Wildman” will be preceded by “Too Cute!: #MerryCuteness."

National Geographic is jumping the gun by taking an “unflinching” look at the war on drugs, specifically in New York City on New Year’s Eve, on Dec. 17, which is bound to be cheerful. That’s airing at the same time as USA’s two-hour-long special where WWE wrestlers visit deployed troops and bring them holiday spirit in the form of oiled muscly bodies, staged pratfalls and half-naked women.

But perhaps no unscripted television program is going to be as bizarre as Spike TV’s “Tattoo Nightmares” holiday special, “Merry Inkmas,” airing Dec. 23. That’s the show that live-action reenacts the ridiculous tattoo stories it unearths. So have fun with that. And in case, on the evening of Christmas day, you’re like, wait, this is terrible, check out TruTV’s “How to Be a Grown Up: Dressing, Lying, and Christmas Cheer,” where comics will tell you how to lie your way through both dressing yourself and "having a good time."

“2 Broke Girls”: “And a Loan for Christmas”
“The Librarians”: “And Santa’s Midnight Run”
“Mike And Molly”: “Tis the Season to Be Molly”
“Comedy Bang! Bang!”: “The Lonely Island Wear Holiday Sweaters and White Pants”

Programming that actually is about, like, the original Christmas

A few different networks will be airing multi-episode miniseries on the history of Jesus. Science has “Biblical Conspiracies”; the American Heroes Channel will be doing “The Bible’s Greatest Secrets.” PBS will air an installment of “Sacred Journeys: Jerusalem” on Dec. 23.  That’s in addition to the literally dozens of animated and/or children’s programming that will tell some version of the story of Christmas, though whether those include talking snowmen and red-nosed reindeer depends on what you see as the spirit of Christmas.

ABC’s “The Great Light Fight.” Because, look, the only thing more American than Guy Fieri at Christmas is a bunch of suburban families duking it out over whose involved and expensive Christmas lights and related outdoor decorations are better. Go big or go home this holiday season, America.